Accessibility links
Review: Zao, 'The Well-Intentioned Virus' For two decades, the band has maintained a mix of thoughtfulness and savagery unparalleled in metal. This is peak Zao, back with its most feral and fully realized offering in years. 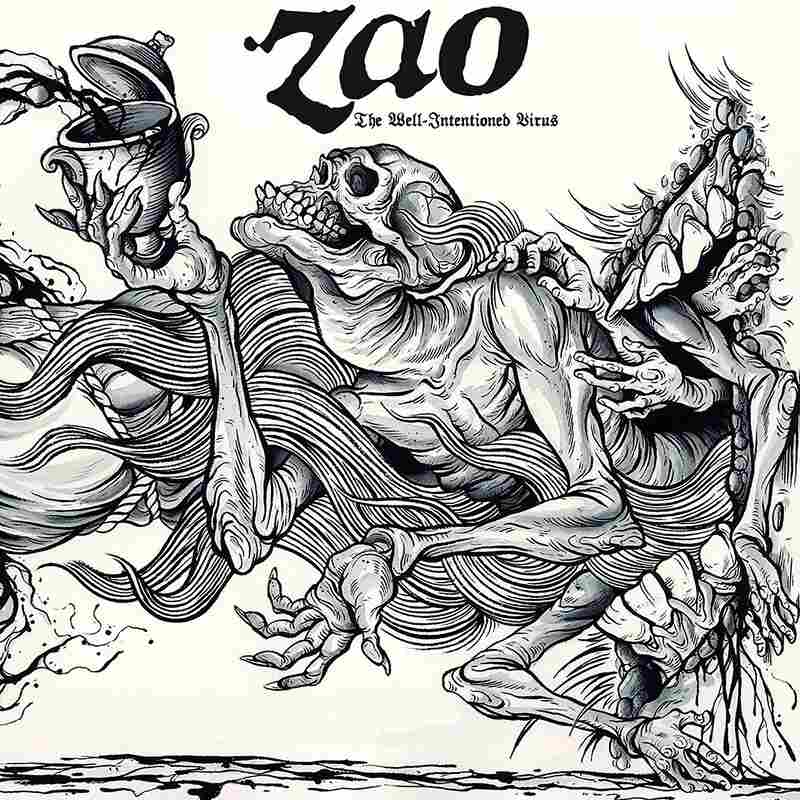 Zao, The Well-Intentioned Virus. Courtesy of the artist hide caption

Miraculously, Zao is still alive. In the 20 years since it began as a breakdown-heavy hardcore band that wouldn't sound out of place in today's backwards-glancing pits, Zao has died and risen like Lazarus in a perpetual state of reanimation. In the late '90s, landmark albums like Where Blood And Fire Bring Rest and Liberate Te Ex Inferis were called "metalcore," a nebulous term for a gnarly mix of metal and hardcore. If the sonically and conceptually ambitious 2004 album The Funeral Of God had come out today, we'd call it "extreme music," an equally nebulous term for an amalgamation of harsh sounds. But through several lineups, breakups, reunions, and label and fan dramas, Zao has maintained a mix of thoughtfulness and savagery unparalleled in metal.

Seven years after its last album, Zao returns with the self-released The Well-Intentioned Virus. This is peak Zao, back with its most feral and fully realized offering in more than a decade. Along with guitarist Russ Cogdell and bassist Martin Lunn, the core writing trio of vocalist Daniel Weyandt, guitarist Scott Mellinger and drummer Jeff Gretz have locked into Zao's essential being: Be heavy and hooky as hell, with raw emotion at the fore. But here, they also actualize the weirdness that's always lurked behind those brick-wall riffs. The latter years of Dillinger Escape Plan come to mind, as well as Gojira, but only in the way both bands — though capable of absolute destruction — use melody as a feature rather than an afterthought.

Recording not far from the band's Greensburg, Penn., home base, Treelady Studios' chief mixing engineer Dave Hidek captures Zao with thunderous clarity. "The Weeping Vessel" is a beast of an opener, with every instrument out front for its lurching riff, but subtly pulled back when Gretz's muscular drumming carries the guitars to the next devastating moment. "A Well-Intentioned Virus" and "The Sun Orbits Around Flat Earth Witch Trials" are nasty pieces of blackened punk featuring Scott Mellinger and Russ Cogdell's spiraling guitars — the former closing with a chaotic spree of Morbid Angel shred, the latter with a minute-long breakdown of sludgy pinch harmonics. The start-stop intensity of "Broken Pact Blues" recalls the nightmarish Liberate Te Ex Inferis without the murky production of so many late-'90s metal records. But where that version of Zao aimed to fill every space with sound, the guitars hang onto sustained notes as Gretz breaks apart Weyant's seared vocal cords with rolling toms. Mellinger really comes into his own as the "clean" singer here, and in tracks like "Apocalypse," "Haunting Pools" and "Observed/Observer," he shares vocal duties with Weyandt equally rather than just accenting his harsh screams.

But let's talk about Daniel Weyandt. He was brought into the fold for 1998's Where Blood And Fire Bring Rest, which was not only a watershed for heavy music, but also a crucial turning point for how mindful lyrics about death and anger can color and rearrange composition. While Zao's metallic ferocity no doubt was the hook for many, Weyandt's words and voice — a nest of fire-breathing serpents — kept fans coming back, screaming along. One of Weyandt's constant themes, even back when Zao identified as a Christian band, is fear and the manipulation of it. The Well-Intentioned Virus, in particular, is a vicious meditation on the subject. In the sort-of title track, Weyandt takes aim at faith-based hatred: "Frothing hordes of true believers / You are right, yes, you are right / You have been chosen to ruin countless heathen lives." In the sprawling, Neurosis-like "Apocalypse," he warns, "The road to your perfect world is paved / On suffering and unmarked mass graves."

While fear is ever-present, the timing of The Well-Intentioned Virus is darkly fortuitous; just this week, Merriam-Webster named "xenophobia" the word of the year. Originally released as a single in 2015 to tease new material, "Xenophobe" really set the structural and thematic stage for what was to come. Remade here, it's chaos incarnate, as breakneck riffs reach a boiling point and threaten to scald Gretz's blast-beaten rolls. But for 30 seconds in the midst of all this noise, the "gray rotting teeth" of xenophobia morph into a Cynic-like fusion of metallic swing. It's a brief, but necessary respite from the hell within.