Accessibility links
Journalist On Trump's Potential Conflicts Of Interest: 'They're Everywhere' The New York Times' Eric Lipton says that Donald Trump could take actions as president that would benefit his business holdings. But Lipton doubts congressional Republicans would probe such conflicts. 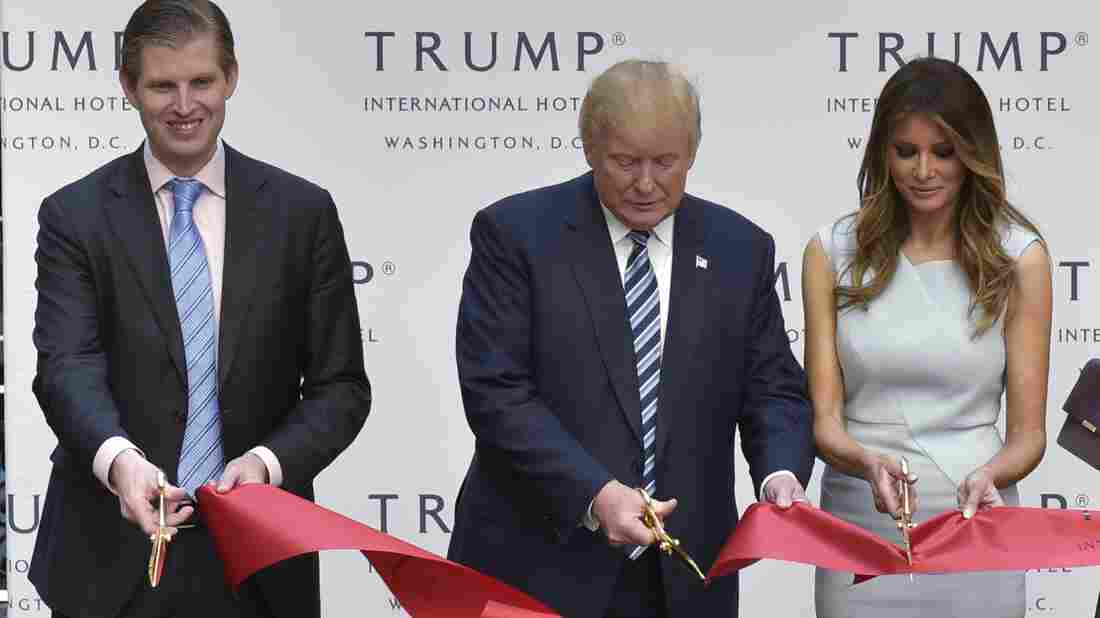 Donald Trump, along with his wife, Melania, and son Eric, cuts the ribbon during the grand opening ceremony for the Trump International Hotel, located in the Old Post Office building in Washington, D.C. The building, which is owned by the General Services Administration, is leased to the Trump family. Mandel Ngan/AFP/Getty Images hide caption 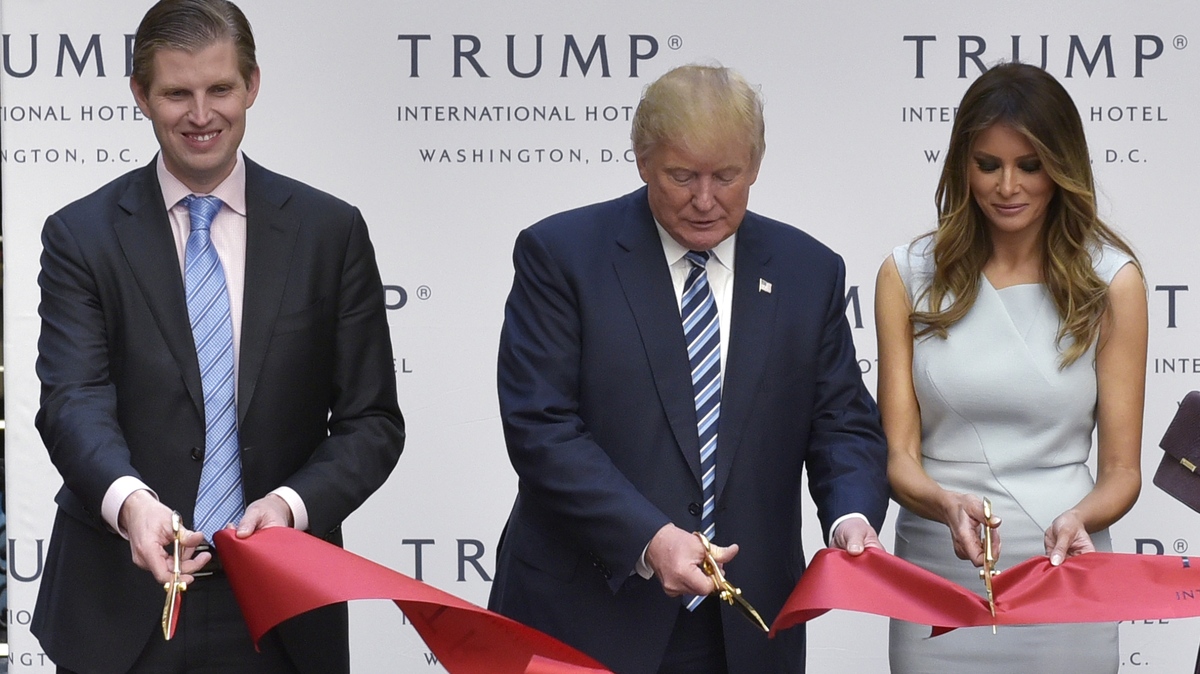 Donald Trump, along with his wife, Melania, and son Eric, cuts the ribbon during the grand opening ceremony for the Trump International Hotel, located in the Old Post Office building in Washington, D.C. The building, which is owned by the General Services Administration, is leased to the Trump family.

Donald Trump announced in a series of tweets Wednesday that he will be taking himself "completely out" of his business operations to avoid potential conflicts of interest as president. The president-elect did not offer details of the plan or say that he would divest financially from his businesses, but he did promise a news conference in the coming weeks that would address the issue.

New York Times investigative reporter Eric Lipton tells Fresh Air's Terry Gross that because of a "quirk in the law," American presidents are not mandated to separate themselves from their businesses.

"He could legally continue to operate them and even take actions as president that would benefit those businesses, and it wouldn't be a formal ethics violation," Lipton says.

Lipton has been investigating Trump's business holdings in the U.S. and around the world. Referring to Trump's potential conflicts, Lipton says, "They're everywhere." He notes that the president-elect already mixed his business interests with his job governing when he praised his own business partner during a telephone call with the president of Turkey.

It was "a very odd circumstance," Lipton says of Trump's phone call. "We want a president to be simply thinking about what are the interests of the United States and having zero consideration for his or her financial interests in any conversations with leaders there."

He appointed them to his transition committee. His daughter and his sons were present for a meeting or greeting with the prime minister of Japan. His daughter Ivanka has participated in telephone conversations that the president [elect] had with the president of Argentina and with the president of Turkey, and there may be many others we just don't know about. So he's already been mixing the roles of dad and president-elect and CEO in a way that would compromise any suggestion that it would not present a conflict for his children to be running those businesses.

On Ivanka Trump's role in the Trump Organization

When I look at the Trump Organization globally, when I go onto the websites that are selling the apartment units in Pune, India, or the websites in Mumbai or just about anywhere, you see photographs of Ivanka Trump. She is like their image-maker. She's a sign of American affluence and beauty, and her image has become as important as the image of Donald Trump himself. ... Her simple presence as part of the entourage of the Trump administration is helping that brand promote itself. ... It's just this blurring of lines which we've never seen before with the White House.

The Post Office building, a few blocks from the White House, that the Trump Organization is leasing to operate the new Trump International Hotel ... is owned by the General Services Administration — essentially the federal government — and it's leased to the Trump family, and the president is going to appoint the head of the GSA, and at the same time as this family is leasing the building from the GSA. ... There's a provision in the contract that the Trump Organization signed that no federal employee should benefit from this lease. So how can he simultaneously be the tenant and the landlord in this contract, essentially, because he appoints the guy who oversees the agency?

[At the] Trump International Hotel in Las Vegas there's a dispute going on right now with the culinary union. The employees at that hotel voted to organize, and the Trump Organization and its partner in Las Vegas refused to recognize that as a legal union formation. Then there was an appeal filed at the National Labor Relations Board, accusing them of unfair labor practices. And in two occasions recently the National Labor Relations Board has ruled against the Trump hotel saying essentially it's violating federal labor laws.

I don't see why the Republicans have any interest in empowering a committee, giving it subpoena power, giving it staff, to investigate potential conflicts by the president.

On Democrats in Congress requesting investigations into Trump's conflicts of interest

I don't see why the Republicans have any interest in empowering a committee, giving it subpoena power, giving it staff, to investigate potential conflicts by the president. The notion that the Republicans would create their equivalent of a Benghazi committee to investigate their president at the same time as they want to try to move an ambitious political agenda to remake the environmental and financial laws of the United States, I don't see that happening politically. There will be pressure on them that will be put by Democrats, there will be lots of letters written by Democrats asking them to do this, but I don't see why they would do it, honestly.