Accessibility links
At Carrier, Donald Trump Says Companies Will Be Taxed If They Move Overseas The president-elect delighted the crowd, reiterating themes, excoriating the media and political opponents. Earlier, he appeared in Indiana, to celebrate 1,000 manufacturing jobs staying in the U.S. 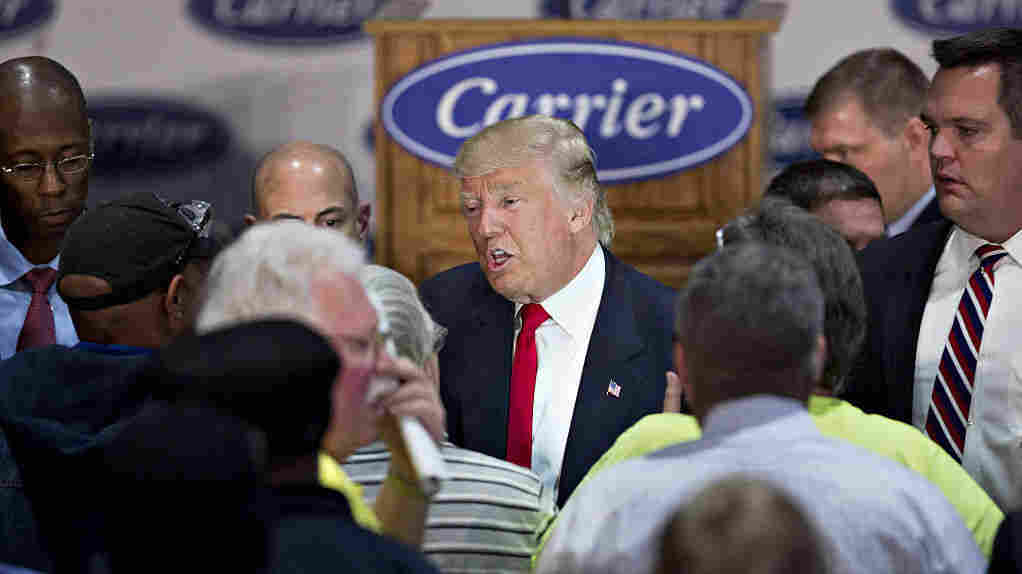 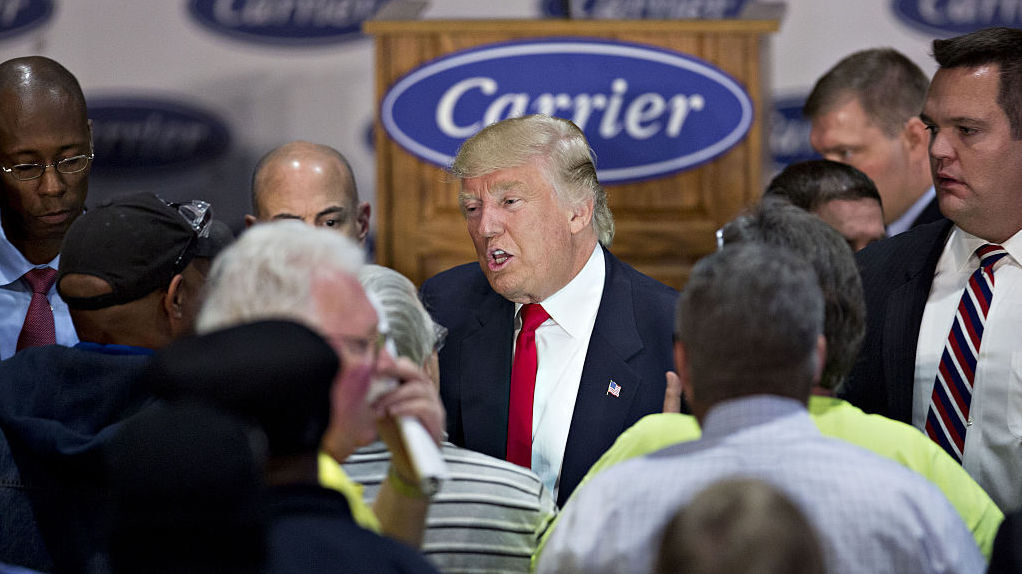 President-elect Donald Trump greets attendees after speaking during an event at Carrier Corp. in Indianapolis on Thursday.

President-elect Donald Trump delivered a campaign-style speech at what was billed as the first stop in a thank-you tour in Cincinnati, Ohio, tonight, in which he pledged to unite America while at the same time recounting old grievances against the news media, and his political opponents.

Trump also used the occasion to announce he will nominate retired Marine Corps Gen. James Mattis as secretary of defense, calling him "the closest thing we have to Gen. George Patton of our time."

Trump touched on nationalistic themes, vowing that from now on "it's going to be America first. Never again," Trump vowed, "will anyone's interest come before the interests of the American people. It's not going to happen."

He also sounded notes of populism, saying that "for too long Washington has tried to put us in boxes; they separate us by race, by age, by income, by geography, by place of birth." Trump said now was the time to "embrace the thing that unites us, and that is America."

Trump also asserted that people were "pouring in" from regions in the Middle East and that he will suspend immigration from some areas. "These are stupid refugee programs created by stupid politicians," he charged.

In fact, refugees undergo an extensive screening process before entering the United States. As NPR has previously reported, it can take up to two years.

But much of Trump's remarks were spent reliving his recent campaign against Democrat Hillary Clinton. "Didn't we have fun fighting Hillary?" Trump said, prompting his supporters to reply with their oft-heard chant, "lock her up."

He spent several minutes excoriating the "extremely dishonest" news media, and mocking TV reporters who said Trump didn't have a chance because of the blue wall of Midwestern industrial states that Clinton was expected to win. "We didn't break it," Trump said of the wall, "we shattered that sucker."

Earlier in the day, Trump visited a manufacturing plant in Indianapolis, where he vowed to make it "very very difficult" for companies to move their operations outside the U.S. under his administration.

Trump appeared Thursday afternoon before workers at a Carrier plant in Indianapolis, whose jobs were saved when the company reversed plans to expand to a facility in Mexico. That decision followed calls Trump made to the top executive of Carrier's parent company, United Technologies.

Trump said companies are not going to leave the U.S. anymore "without consequences." Those who do, he said, will be "taxed very heavily at the border." Congress, which is controlled by Republicans generally averse to new taxes, would need to approve such a plan.

According to a report in the Wall Street Journal, United Technologies will receive $7 million in tax breaks over 10 years for agreeing to keep the 1,000 Carrier jobs in Indiana. The Indiana Business Journal reported United Technologies was also afraid of losing defense contracts.

Trump, who made keeping manufacturing jobs in the U.S. a central part of his campaign, also promised to do "great things for business." He said his administration would work to reduce corporate taxes from 35 percent to "hopefully" 15 percent. He also pledged to reduce regulations, most of which he said were "nonsense," although he conceded some were necessary to protect worker safety and health.

Trump said the $16 million Carrier says it will invest in the plant, which he said was a minimum, will be quickly recouped, because of "the goodwill that you have engendered by doing this." He added, "You're going to sell so many air conditioners."

Trump also defended intervening in the company's decision-making. "They say its not presidential to call" business leaders, Trump said. "I think its very presidential." And he vowed to make more such calls to executives at companies threatening to leave the U.S., "because they're not going to leave the country."