Accessibility links
What Are Trump's Potential Conflicts Of Interest? Here's A List President-elect Trump has interests in hundreds of businesses. Many government agencies and policies could affect his profits. Here's a look at some of his businesses, and the possible conflicts. 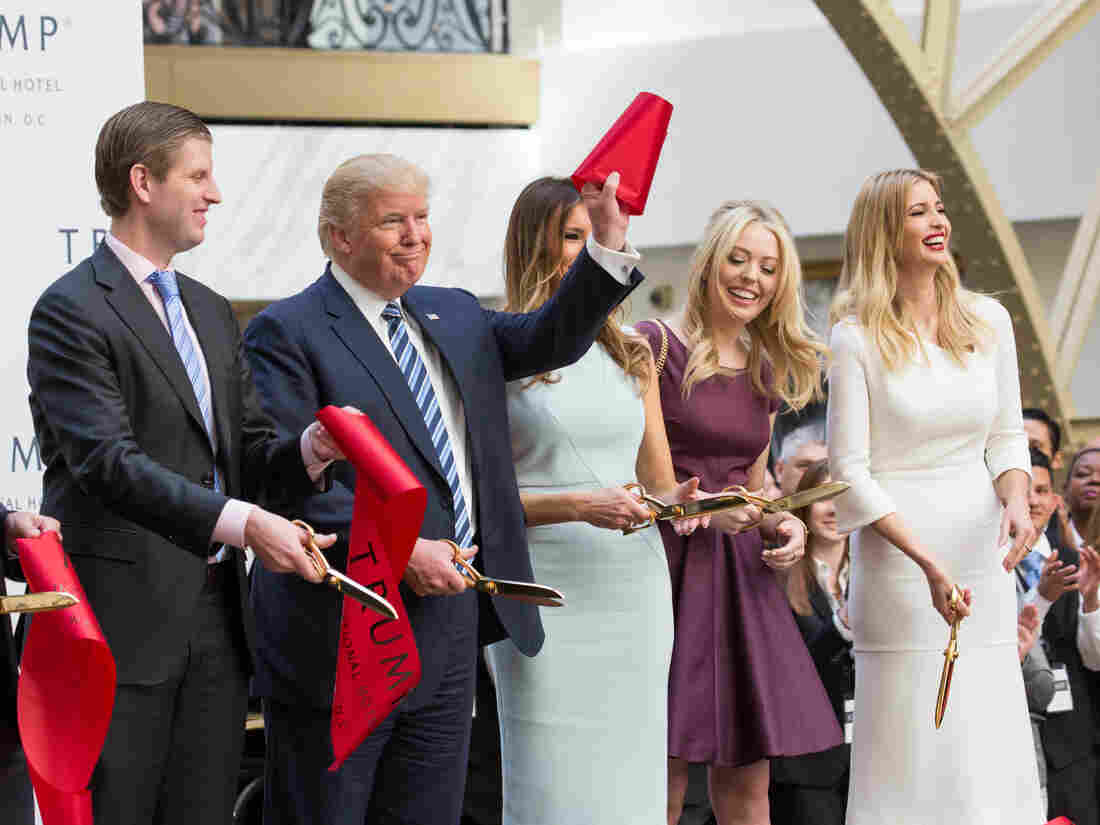 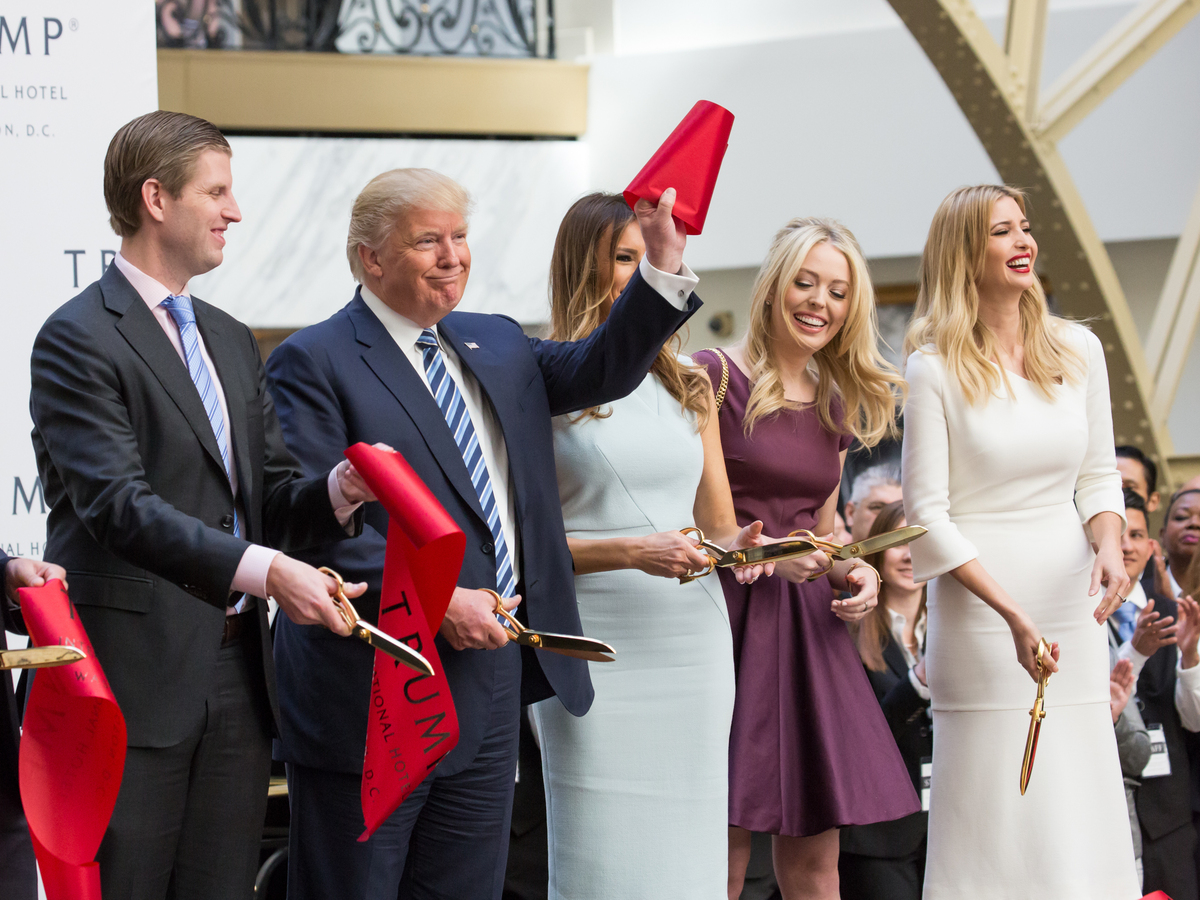 Standing with his son Eric, wife Melania, and daughters Tiffany and Ivanka, Donald J. Trump cuts the ribbon for his latest property, the Trump International Hotel in Washington, D.C., on Oct. 26.

Trying to understand the Trump Organization is a daunting task. President-elect Donald Trump has not released tax documents, so the best clues about his privately held business interests come from a financial disclosure form he released in May.

The document covers scores of pages with small type, and suggests he is financially involved with hundreds of companies, including some that simply license his name.

A sort through that disclosure form, submitted to the Office of Government Ethics, shows his largest sources of revenue are golf courses and office-tower rents. But his interests are far flung, and include media, retail, entertainment and much more.

Those business interests are affected by government agencies and policies. Below is an overview of some of his business assets and operations (excluding debts) and the possible areas where conflicts may arise.

Trump himself noted that there are ethical concerns about his dealings. He said in tweets that he would hold a "major news conference" on Dec. 15 with his children to address the issue. (Editor's note: The press conference was later canceled, just days before it was meant to take place, and rescheduled for January.)

"While I am not mandated to do this under the law, I feel it is visually important, as President, to in no way have a conflict of interest with my various businesses," Trump tweeted. He said "legal documents are being crafted which take me completely out of business operations."

But at this time, he has not explained his plans.

NOTE: All companies, locations and revenues listed below are as reported by the Trump Organization in his Office of Government Ethics filing. Revenues shown are for January 2015 through May 15, 2016. In most cases, the company reported revenues; in some, only ranges. We are excluding sources of investment income unrelated to Donald Trump's businesses or employment. We are including only revenue-generating assets and activities that discernibly fall into the categories below, based on the description reported on the form.

Trump has business interests in at least 20 countries, primarily India, the Philippines and Indonesia and other developing nations. His foreign policy decisions could have a big impact on profits earned outside of the United States.

Trump's overseas business operations could put him into conflict with the policies and plans of the State Department, the Pentagon and the U.S. Trade Representative.

Many federal agencies regulate environmental issues involving golf courses — including the U.S. Army Corps of Engineers and the Environmental Protection Agency, which often are at odds with course owners regarding water storage and storm water ditches.

Trump already has complained about wind farms cluttering the views from his Scottish golf courses; presumably he would have the same concerns in this country. Golf courses also can be helped — or harmed — by flight patterns controlled by the Federal Aviation Administration.

Hotels often employ low-wage workers, who could be affected by a host of government agencies and actions. For example, if Congress were to approve a large increase in the federal minimum wage, the president could veto it to hold down labor costs.

Here are a few federal agencies that could affect Trump labor costs and practices: the Employee Benefits Security Administration, the National Labor Relations Board, the Bureau of Citizenship and Immigration Services, the Equal Employment Opportunity Commission and the Occupational Safety and Health Administration.

The value of commercial real estate businesses can be greatly affected by federal tax rules involving depreciation, taxation of capital gains, estate taxes and passive loss limitations. Trump would have the power to name the head of the Internal Revenue Service, as well as to veto any tax-related legislation passed by Congress.

Trump has been a major figure in the television industry for many years. The Federal Communications Commission sets rules for broadcasting and cable, and Trump will be able to appoint members to it. Federal laws not only regulate broadcasting, they also cover content issues, such as copyright and profanity.

Trump has business interests in restaurants and vineyards. Federal agencies play a regulatory role in those areas. The Food Safety and Inspection Service, as well as the Centers for Disease Control and Prevention, work to ensure food safety and proper labeling while preventing outbreaks of foodborne diseases.

Environmental regulations have an impact on food-growing costs, and the federal government plays a big role in setting labor costs (see the section on Hotels).

The profits Trump can make from retail operations can be affected by the Federal Trade Commission's Bureau of Consumer Protection, the Labor Department and the U.S. Trade Representative. Those federal entities can create rules that drive up a retailer's cost of consumer protections, labor and imports.

Trump owns a small fleet of planes and helicopters, which is regulated by the Federal Aviation Administration. The carbon emissions generated by his aging aircraft are regulated by the Environmental Protection Agency. The president appoints the heads of both the FAA and the EPA.