Accessibility links
Video Visits Replace In-Person Interactions In Jails Between Inmates And Families Video visitation is growing in popularity at U.S. jails, but there's a catch: Many jails have ended in-person visits between inmates and their families as they adopt the new technology. 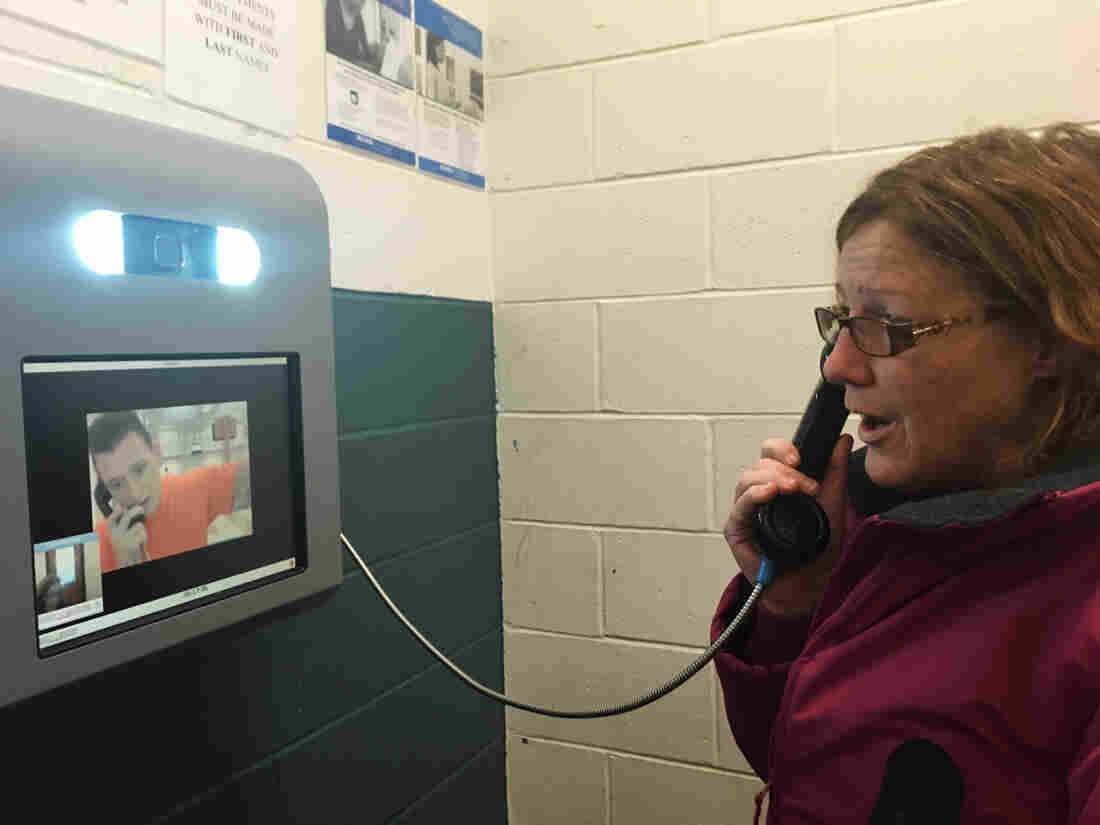 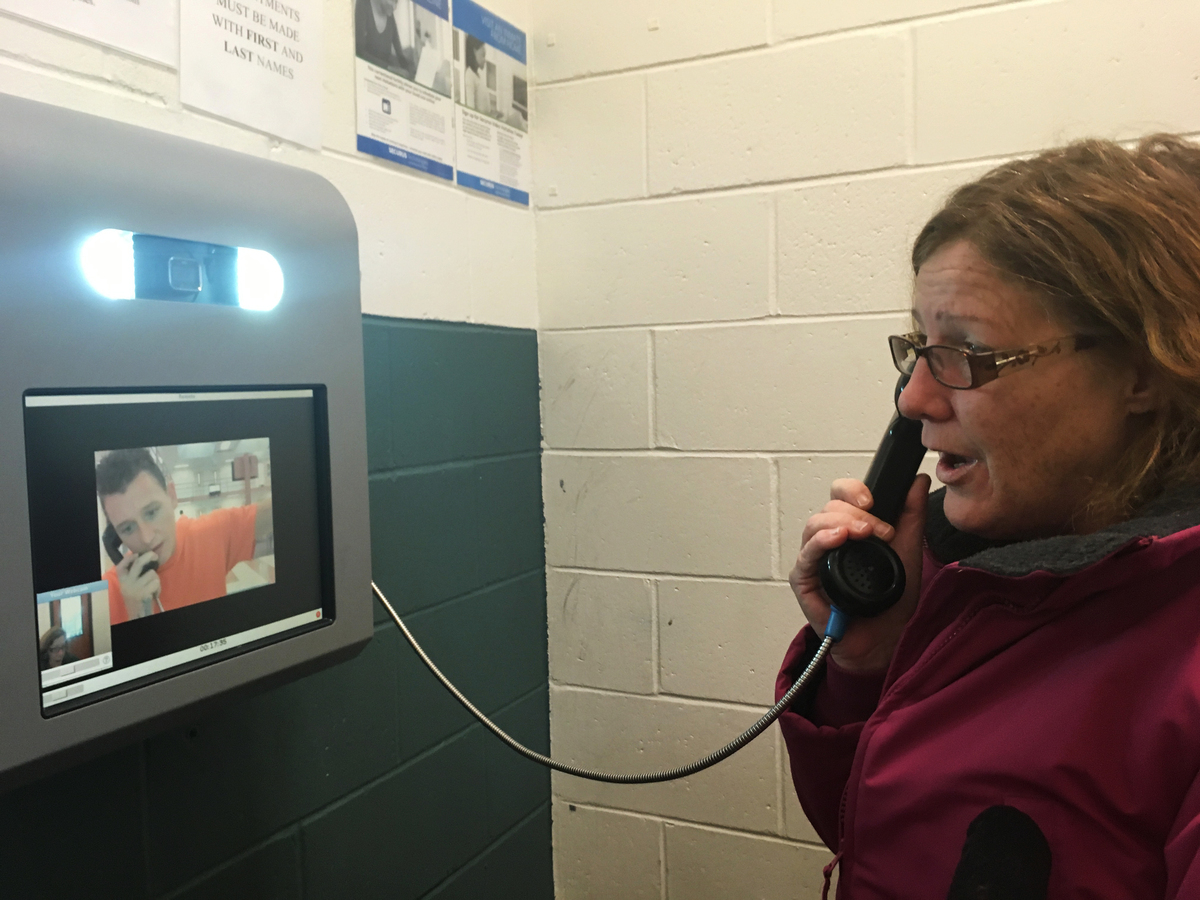 Since her son Tommy went to jail, Dawn Herbert has been trying to see him as much as she can. He's incarcerated less than a 10-minute drive from her house in Keene, N.H. But he might as well be a lot farther.

"He's in that building and I can't get to him," Herbert says.

Dawn's visits probably don't look like what one might picture, where she's sitting across a table, or behind a pane of Plexiglas looking at and talking to her son.

No. When Herbert visits her son, she has to sit in a windowless booth just past the jail's front door, hold a phone to her ear, and wait for him to show up on a little screen.

"It's nice that [it says] you have an appointment, you are connected, which is 'OK, great,' " she says.

On some days Herbert can hear Tommy, but most times she says she can't. The sound cuts out or the screen freezes up. And each time, Tommy is a few hundred feet away in his cellblock, sitting at another little screen.

"I can't stand it, because he's on the screen in front of me, and I can't touch him," Herbert says.

That's what a visit means in the jail Tommy's in. Because when the jail signed its contract with Securus, the company that installed the technology, it agreed to ban all in-person visits between inmates and families.

This type of visitation is on its way to becoming the new normal in jails across the U.S.: Video visits come in; in-person visits disappear. According to the Prison Policy Initiative, more than 500 correctional facilities around the country have some form of video visitation.

Richard Van Wickler, the superintendent of the Cheshire County Jail, where Dawn's son is, signed the jail's contract with Securus.

In Prison And Outside, He Found His 'Iota Of Light': A Mentor Named Fred

"We were actually reluctant; we were like, 'Eh, really?' " Van Wickler says. "Video visitation, I mean, it's like another technological advancement of our society that nobody's really used to. But then we began to see the advantages of it."

One advantage is less worry about contraband coming in, which means fewer inmate strip searches, which means less staff time.

And here's another advantage: Jails stand to make a profit by adopting this type of visitation. If families do a video visit at the jail, it's free, but if they do it from their home computer, it can cost $1 per minute. Securus promised the Cheshire County Jail a 20 percent cut of the thousands of dollars those fees bring in — that cut totaled $2,500 for the jail last year. The county paid $30,000 to install the video system

Van Wickler says he is sympathetic to what's being lost here, but it's part of the social contract of being incarcerated.

"When one violates the law and one has to serve time in a public institution, one of the liberties that one could lose is the opportunity to hug a loved one," he says. "And you know what? That's a difficult sanction. That's hard time."

But anyone looking to argue that banning in-person visits goes a step beyond hard time has to be able to point at a legal definition of what a visit is. And as Bernadette Rabuy of the Prison Policy Initiative points out, those laws passed before video visitation came out.

"They refer to how many visits need to be provided in the jails, but they don't define what a visit might be," she says.

Advocates like Rabuy say video visitation is great for families who are far away, as a supplement to real visits.

Visitation by video is actually far more common in county jails than in state prisons. Rabuy says banning in-person visits in jails, which are typically closer to the families, makes little sense. "We're taking away a family's right to an in-person visit when they're most able to provide that for their incarcerated loved one," she says.

When NPR tried to contact Securus for its take on the issue, an automated voice greeted the caller, and then the call continued to be handed off to customer service representatives who did not provide an answer.

Video visitation is catching on really fast. Seventy-five percent of the jails that use it have ended in-person visits altogether — even when that wasn't required in the contract.

So as long as their sons or daughters are locked up, moms like Dawn Herbert will have to get used to a screen being the closest they can get.