Accessibility links
Trump Touts Military Strength In N.C., Introduces James Mattis On Second Stop Of 'Thank You' Tour The president-elect also formally introduced retired Marine Corps Gen. James Mattis as his pick to lead the Defense Department. Congress is also moving to fast-track a waiver he needs to be confirmed.

Trump Touts Military Strength In N.C. On Second Stop Of 'Thank You' Tour

Trump Touts Military Strength In N.C. On Second Stop Of 'Thank You' Tour 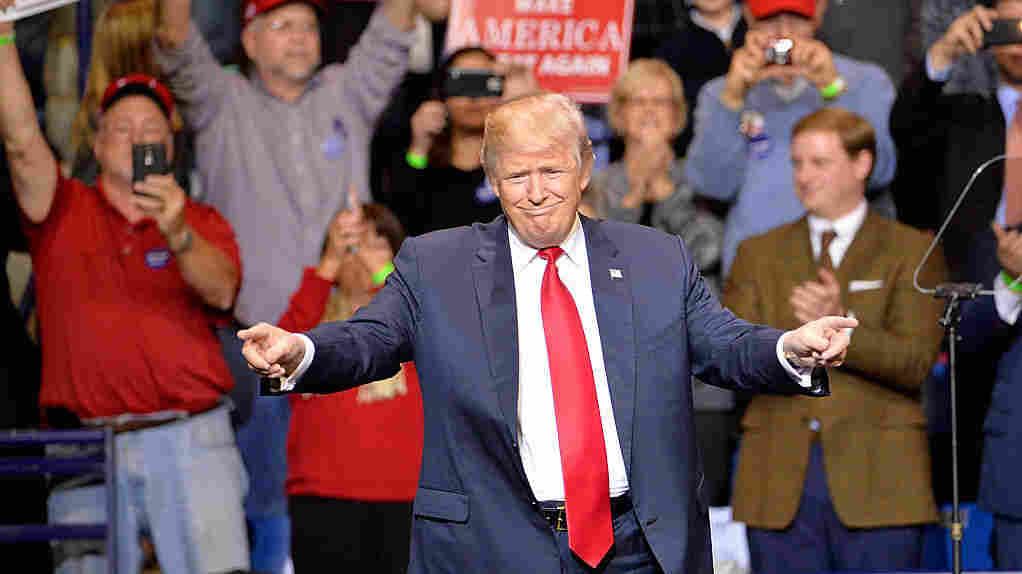 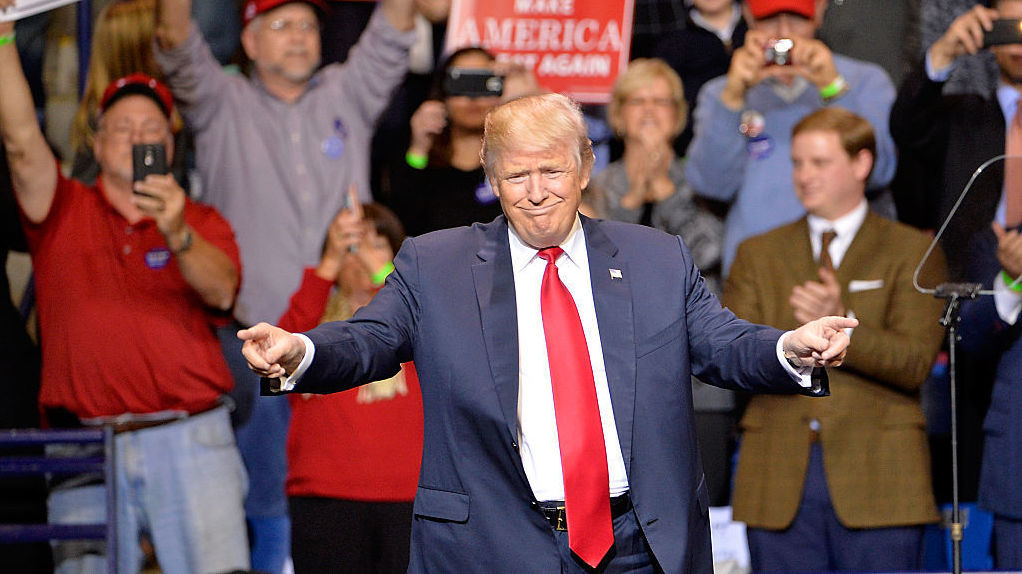 President-elect Donald Trump points to his supporters during his "Thank You" rally in Fayetteville, N.C., on Tuesday night.

"Mad Dog plays no games, right?" Trump asked, invoking the general's nickname, and added that the country was fortunate "that a man of this character and integrity will now be the civilian leader atop the Department of Defense."

To do that though, Mattis will have to get a waiver from Congress to bypass a law that calls for a seven-year "cooling off" period before someone who served in uniform can take the civilian post; Mattis retired from the Marine Corps in 2013. Just before the rally began, GOP lawmakers announced that they would include a provision to fast-track such a waiver as part of the stop-gap funding bill they need to pass by Friday to keep the government open.

According to NPR congressional correspondent Susan Davis, the waiver will still go through the Armed Services Committees and receive a stand-alone vote in the new Congress before Mattis can be confirmed for the post. But Democrats will have fewer procedural tools to slow walk the waiver vote. Democrats objected, but it is unlikely to derail passage of the funding bill this week.

Briefly taking the stage after the president-elect's glowing praise, Mattis alluded to that necessary step, telling the crowd that, "I look forward to being the civilian leader as long as the Congress gives me the waiver and the Senate votes to consent."

"If he didn't get that waiver, there'd be a lot of angry people," Trump warned. "Such a popular choice."

The stop in the Tar Heel State to formally introduce Mattis wasn't by accident — the state is home to a large military population and several military bases, including nearby Fort Bragg, one of the largest military installations in the world.

Trump touted that, as president, he would eliminate the military cutbacks known as sequestration, which he said had led to the depletion of the armed forces. And Trump said there would be a new commitment to "the best" new military equipment that is "new, modern [and] clean."

"All men and women in uniform will have the supplies, support and equipment to get the job done incredibly well and perfectly," the president-elect said.

"We build up our military not as an act of aggression, but as an act of prevention," he continued, vowing to work to fight radical Islamic terrorism, calling it "an ideology of death that slaughters innocent men, women and children." He also reiterated his pledge to suspend immigration from countries with dangerous ideologies, though not specifying which countries would be on such a list.

Trump also promised that he would have a commitment to helping veterans by overhauling the Department of Veterans Affairs, while providing access to private care when lines at VA clinics are too long.

"It will be the duty of my administration to ensure that we protect those who protect us," Trump said, teasing that more announcements about appointments in that policy area were forthcoming soon.

The roughly half-hour speech began about an hour late after Trump's plane was delayed and diverted because of inclement weather. But despite the rally-type atmosphere that was the hallmark of his presidential campaign, Trump remained largely on-prompter and on-message.

He couldn't help but boast of his unlikely victories at times though, including his unexpected win in North Carolina and also in industrial Midwestern states like Michigan and Wisconsin.

"We don't talk about numbers, we bring people together, but boy, were those numbers good," Trump said.

And he brought up flag-burning and possible consequences a few times during his speech, hearkening back to a tweet last month that dredged up the 1980's-era controversy that the Supreme Court has ruled is protected speech.

"We love our flag, and we don't like it when we see people ripping up our flag and burning it, and we'll see what we're going to do about that, ok?" Trump said.

And in a rare move, Trump actually quieted some of the ballooning jeers of the press.

Just ahead of Trump's rally, Vice President-elect Mike Pence was giving his own speech in a very different setting — speaking to top donors of the conservative think tank the Heritage Foundation at Trump's own new D.C. hotel.

He gave a more traditional, subdued policy speech, thanking the group of conservative activists for their support of their ticket. He promised that atop their agenda was repealing and replacing Obamacare and to roll back regulations and "unconstitutional executive orders" signed by President Obama.

The vice president-elect, whose son is an active duty Marine, also said that a focus of the Trump-Pence administration would be a to replenish the country's military arsenal as an important part of fighting terrorism and securing the country.