Accessibility links
The 10 Best Books Of 2016 Faced Tough Topics Head On Book critic Maureen Corrigan says that if there's one word that characterizes her list this year, it's "serious." These books certainly aren't grim or dull, but they take on big, difficult subjects. 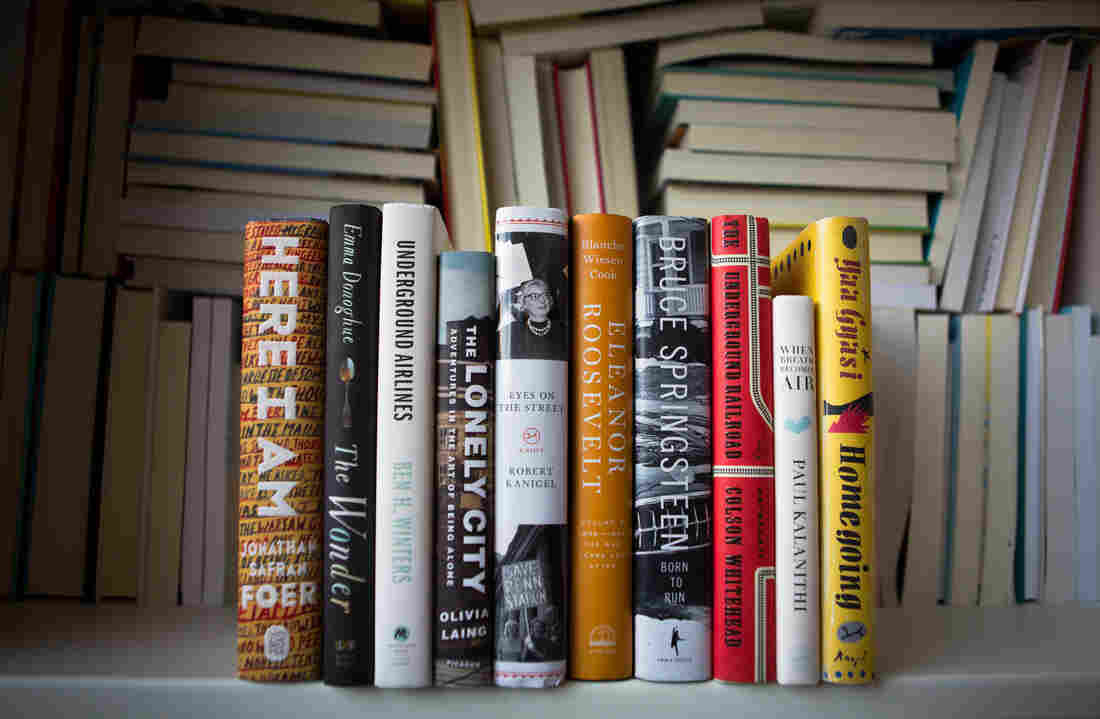 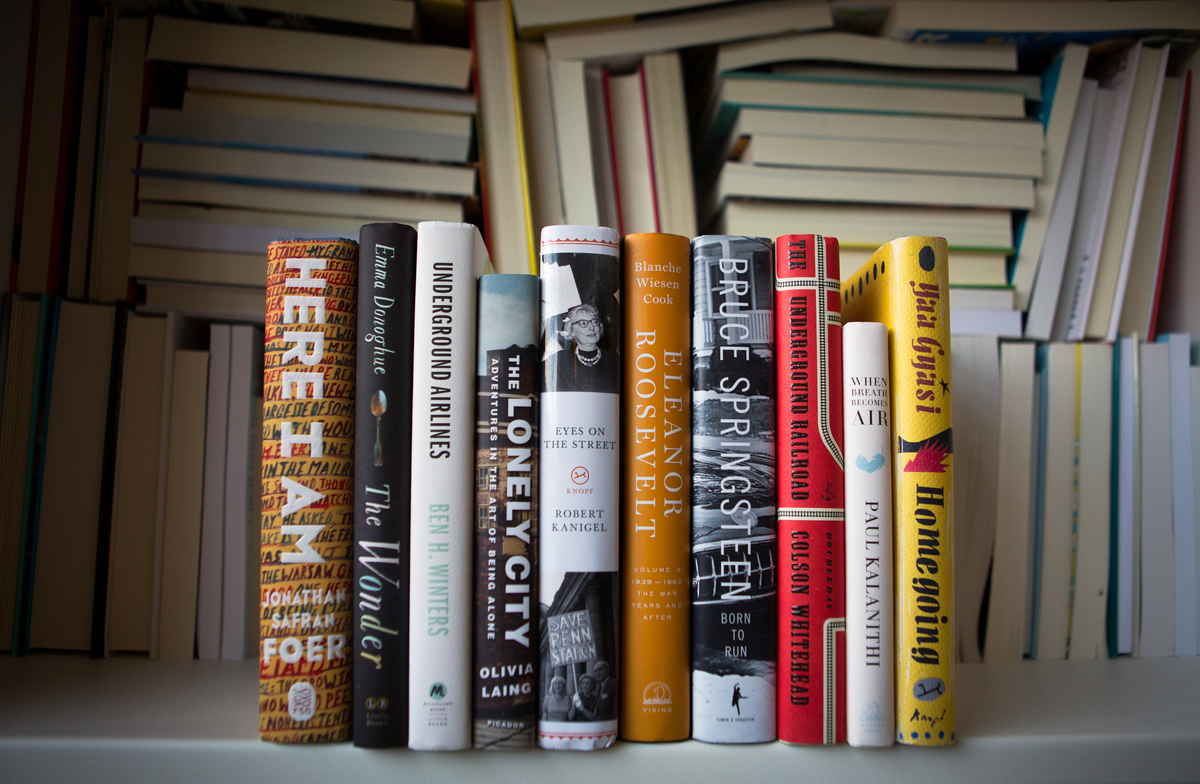 I hesitate to say it, but the one word that characterizes my best books of 2016 list is "serious." These books aren't grim and they're certainly not dull, but collectively they're serious about tackling big, sometimes difficult subjects — and they're also distinguished by seriously good writing. Here are 10 that you shouldn't miss.

The Underground Railroad by Colson Whitehead is my pick for the book of the year. When Whitehead made his debut in 1999 with The Intuitionist, he was praised for his ingenuity: After all, who thinks up a novel about elevator inspectors and race? The Underground Railroad, set in antebellum America, is every bit as imaginative, while its vision of the surreal insanity of racism is even more devastating.

Whitehead's premise is that the Underground Railroad was an actual network of trains running beneath the soil of the American South. His story follows an enslaved woman named Cora in flight from a plantation in Georgia.

Whitehead's novel bows to other great African-American writers — from Harriet Jacobs to Ralph Ellison — who've chronicled a variety of similar journeys. Yet, even in so doing, Whitehead's Underground Railroad is one of a kind.

My pick for best debut novel of the year is Homegoing by Yaa Gyasi. It's a multigenerational family saga that opens in 18th century Ghana with a depiction of the slave trade among Africans.

Two half-sisters named Effia and Esi are born in different tribal villages and grow up in ignorance of each other's existence. Effia is married off to an Englishman who's the acting governor of Cape Coast Castle, one of the sites that feature an infamous "door of no return" through which captives were pushed onto ships to carry them into slavery in the New World. In a section that personalizes the malign capriciousness of the slave trade, Esi is captured in a raid and winds up in the dungeon of Cape Coast Castle, the very dungeon that her half-sister walks over daily.

Gyasi pulls her readers deep into her characters' lives through the force of her empathetic imagination.

Not to be confused with Colson Whitehead's The Underground Railroad, Ben H. Winters' Underground Airlines approaches the topic of slavery through the genres of alternative history and noir suspense.

Winters' novel imagines the Civil War never happened and that slavery still exists on corporate plantations in some Southern states called "The Hard Four." The other states in the union have agreed that any escaped "Person Bound To Labor" must be captured and returned. That's where a bounty hunter named Victor comes in.

Victor is adept at infiltrating abolitionist groups because he's black himself; or, rather, as Victor tells us, he's "moderate charcoal" with "brass highlights," which is one of the "172 varietals of African American skin tone delineated in the US Marshals Service field guide." Victor's voice — melancholy and wry — leads us through the hunt for fugitives, as well as through the puzzle of his own identity and deeper purpose.

Jonathan Safran Foer's Here I Am is a thick, frenetic and deeply moving novel about a marriage and family falling apart — a personal disaster paralleled on a grand scale by a devastating earthquake in the Middle East.

Foer tells his story through an array of voices, memories and pages-long catalogs in which he riffs on everything from the contents of the Blochs' medicine cabinet to the old-fashioned and now unpopular names on the headstones in a Jewish cemetery — names like "Pincus," "Beryl," "Hymie" and "Wolf."

Foer's tone constantly slip-slides from melancholy to comedy, ultimately settling on melancholy as most fitting for the human condition.

The Wonder by Emma Donoghue is just that: "a wonder" of a story about religious delusion and self-denial set in 19th century Ireland. Like her 2010 breakout novel, Room, which was also a film, The Wonder is set in a confined space, but these small rooms of Donoghue's teem with drama and great moral questions.

The story takes place in a farmer's cottage in central Ireland. An otherwise ordinary young girl claims to have been living on manna from heaven for the past four months; the British private-duty nurse who has been hired to watch her suspects a fraud. There are strains in this increasingly sinister situation of both Henry James' The Turn of the Screw and Ron Hansen's brilliant 1991 novel about female martyrdom, Mariette in Ecstasy. Donoghue manages to engage larger mysteries of faith, doubt and evil without sacrificing the lyricism of her language or the suspense of her storyline.

The Lonely City: Adventures In The Art Of Being Alone

In her 2013 book, The Trip to Echo Spring, critic Olivia Laing explored the link between great writers and alcoholism; in her latest book, The Lonely City, she investigates the connection between loneliness and visual art.

Laing says her own experiences of raw loneliness made her curious about isolation and the creativity that can arise out of it. By, as the poet Adrienne Rich put it, "diving into the wreck" of artifacts like Andy Warhol's Time Capsules and scenes from Alfred Hitchcock's ultimate tribute to urban voyeurism, Rear Window, Laing illuminates the strange contours of these works. In doing so, she campaigns against what she calls "the gentrification" of cities and of emotions. By that she means "the homogenizing, whitening, deadening effect" that causes us to deny the existence of the shameful and the unwanted. The Lonely City is a provocative work of memoir, biography and criticism.

In this third and concluding volume of her (there's no other word for it) monumental biography of Eleanor Roosevelt, the eminent feminist historian Blanche Wiesen Cook focuses on the war years.

As Franklin's attention was absorbed by World War II, Roosevelt redoubled her efforts to protect New Deal programs. Roosevelt's homeland concerns (like fair housing laws and the relaxing of quotas on immigration) ensured that she and her so-called "pink pals" would be constant targets of anti-Communists. When America entered the war, Roosevelt traveled to Blitz-ravaged London and flew across the Pacific to visit servicemen in Bora Bora and Guadalcanal. Even there, she continued her campaigns against racism, visiting and shaking hands with "Negro" servicemen.

You get the sense that as Roosevelt grew into the role of "First Lady of the World," she was so busy that even death (when it finally came calling in 1961) had to take a number and wait.

Eyes On The Street: The Life Of Jane Jacobs

Eyes on the Street by Robert Kanigel traces the life of Jane Jacobs, the writer and activist who battled Robert Moses' plan to build an expressway through the heart of Lower Manhattan. Jacobs also wrote The Death and Life of Great American Cities, a staple of urban-studies courses and one of the classic books about New York. "Eyes on the street" is a phrase that Jacobs herself coined about the crucial importance of a vibrant street life to neighborhood safety and community. Kanigel acknowledges Jacobs' shortcomings as a thinker and a human being: He makes room for those critics who fault Jacobs for downplaying the harsher realities of how race and class influence the composition of city neighborhoods. But, in all, Eyes on the Street is a powerful and all-too-rare biography of the making of a female public intellectual.

Bruce Springsteen's Born to Run is a lyrical and self-aware spin on the essential American story of the kid from Nowhere who manages, through talent, aspiration and hard, hard work, to become Somebody ... in this case, not Jay Gatsby but "The Boss." Better than most folks, fictive and real, who've made that improbable journey, Springsteen remembers where he came from (Freehold, N.J.) without tainting his reminiscences about, say, sleeping under the Asbury Park boardwalk as a broke young musician with false humility. (Indeed, according to Bruce, it was fun!) In one of his many reflections here about holding onto his roots, Springsteen says: "I didn't want to erase, escape, forget or reject. I wanted to understand. ... No one you have ever been and no place you have ever gone ever leaves you. The new parts of you simply jump in the car and go along for the rest of the ride."

At the age of 36, neurosurgeon Paul Kalanithi was caught up short by a diagnosis of stage IV lung cancer. His posthumously published memoir, When Breath Becomes Air, is by turns a raw and elegant inquiry into the meaning of it all — education, professional ambition, love, family — in the face of the inevitable ending that awaits us all.

Several times, Kalanithi, who also attained a master's degree in English, quotes the famous Samuel Beckett line: "I can't go on. I'll go on." His charged memoir is, in part, Kalanithi's own way of going on — a qualified miracle that books make possible.

Looking For Great Reads? The Book Concierge Is Here To Help