Accessibility links
Military-Trained Police May Be Less Hasty To Shoot, But That Got This Vet Fired A Marine-turned-cop was fired after he did not shoot a man who had a gun. His Marine training led him to believe there wasn't clear hostile intent; his bosses say he risked other officers' lives. 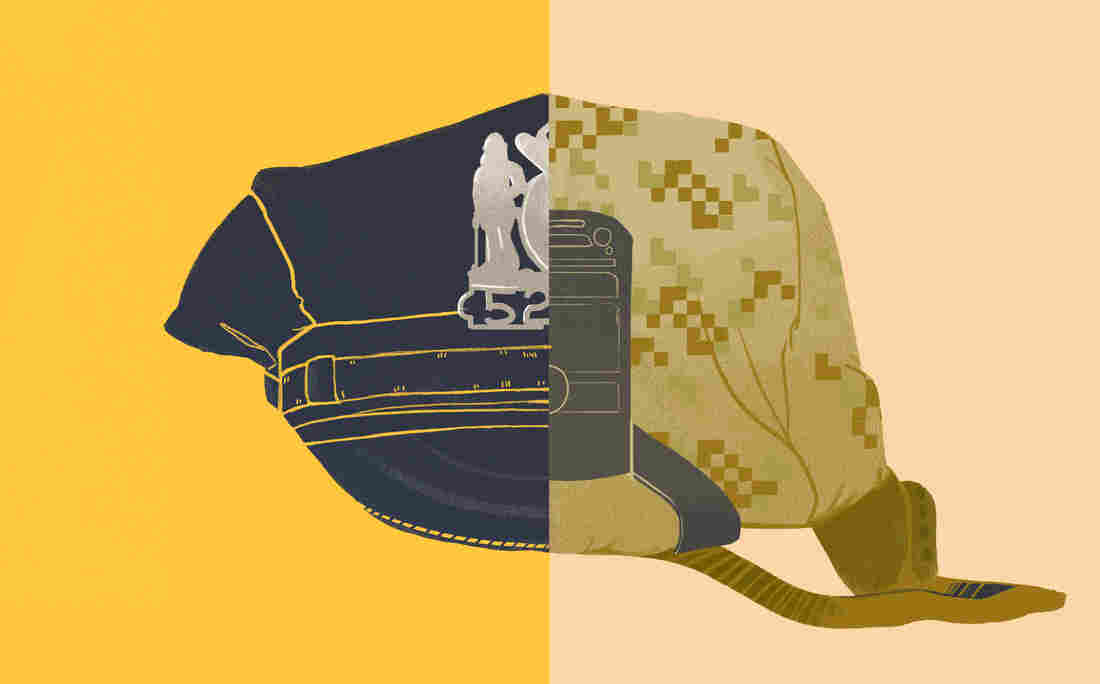 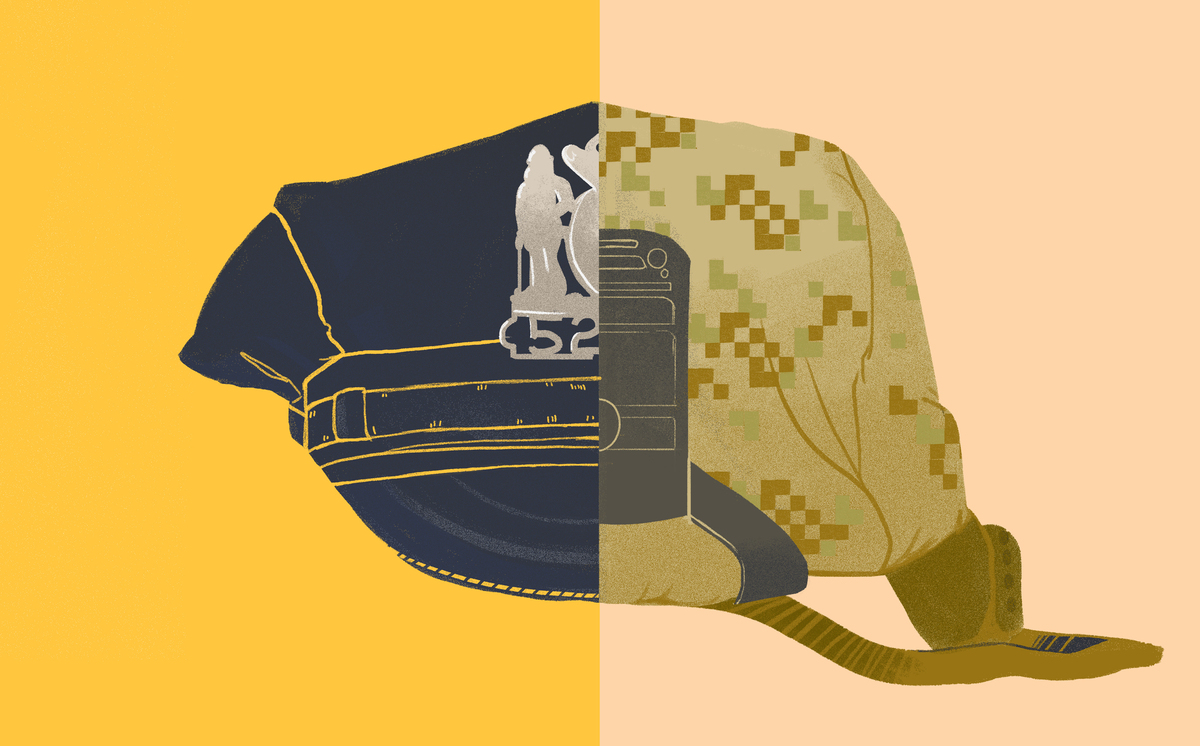 There are plenty of recent stories involving white police officers who have shot and killed black men, including some who are on trial for those shootings. Then there's the case of a white cop who did not shoot a black man holding a gun — and it may have cost him his job.

"Had a female stating they needed someone right now. She sounded hysterical," the dispatcher said. "Hung up the phone, will not answer on call back."

Nearest to the address was Stephen Mader, a 25-year-old Marine Corps veteran and rookie cop who was alone in his squad car. He got to the house and saw Ronald D. Williams, a 23-year-old black man, standing outside with his hands behind his back.

"And I say, 'Show me your hands,' and he's like, 'Naw, I can't do that,' " Mader told NPR. "I said, 'Show me your f'ing hands.' And then he brings his hands from behind his back and puts them down to his side. And that's when I noticed he had a silver pistol in his right hand."

Mader didn't know it, but Williams' girlfriend, who was inside the apartment with their infant son, had called 911 again. She told the dispatcher:

On the 911 tape you hear Officer Mader on the radio saying, "We have a gun here." All the dispatcher said to the cops is this: "Watch out for a weapon."

Mader drew his weapon and told Williams to drop the pistol.

So even though Mader didn't know what Williams' girlfriend told 911 — that the gun was empty and the man was trying to commit "suicide by cop" — Mader didn't shoot.

Police get trained on de-escalation, but in that moment Mader was leaning more on training from the Marine Corps and experience in Afghanistan. That knowledge can be a key difference between police officers with military backgrounds and those without.

"Before you go to Afghanistan, they give you training," Mader said. "You need to be able to kind of read people. Not everybody over there is a bad guy, but they all dress the same. That's kind of what the situation was that night."

"There was an emphasis on winning hearts and minds, and focusing more on stabilizing communities and protecting the civilian population," Gaston said.

In Weirton, Mader still had those wartime rules in mind. The Marines had taught him to wait for clear hostile intent before opening fire, something he didn't see from Williams.

"For me, it wasn't enough to kind of take someone's life because they're holding a gun that's not pointed at me," Mader said.

But then — and this all happened in seconds — Mader's backup arrived. All they knew is that the dispatcher said there was a weapon. Mader remembers that Williams walked toward them as they drove up and got out of their cars.

"Their weapons are drawn, and they're screaming at him to drop the gun," Mader said. "At that point he starts waving the gun, back and forth between us."

Before you go to Afghanistan, they give you training on, you need to be able to kind of read people. Not everybody over there is a bad guy, but they all dress the same. That's kind of what the situation was that night.

Stephen Mader, a Marine Corps veteran who had become a police officer but was fired

One of the officers fired four shots, and a bullet hit Williams in the side of the head, leaving him on the pavement. The dispatcher called an ambulance, but the officers saw there was no hope in giving first aid. Mader went inside to check on the girlfriend and baby.

The gun did turn out to be empty, though Mader said the officers had no way of knowing that for sure.

He said that though he tried to talk to Williams one-on-one while he was there, when the other officers showed up, all they saw was someone waving a gun around.

"The one officer felt that his life was in danger, along with others', and he decided to fire at the subject," Mader said. "And I believe he was justified in what he did."

"A better understanding of rules of engagement"

What Mader thinks was not justified happened a few days later: Police Chief Rob Alexander told Mader that he was being fired for putting his fellow officers' lives in danger.

"When the officers arrived on the scene, they seen these two in a standoff pointing guns at each other, and that officer froze," Alexander said at a press conference in September.

But what Alexander characterizes as hesitation others may see as experience. Around the country, police chiefs who've hired war veterans have commented on their maturity and self-control when facing danger.

Dave Wilson, chief in the Wisconsin town of Shell Lake, an Iraq War veteran himself, said the vets he has hired make for ideal cops.

"If anything else, they have a better understanding of rules of engagement and use of force than others might," Wilson said. "They're used to seeing people holding guns, and they take the time to assess the real danger of the situation."

Researchers are starting to look at this, too. At Washington State University, Stephen James is part of an effort to test law enforcement officers' reactions in simulators, and one of the factors they're tracking is whether the officers are veterans. The data haven't been compiled, yet, but he said other studies of how the brain operates under pressure would suggest that veterans are more "patient."

"Combat vets who've been exposed to extreme violence have a different 'threat threshold,' " James said, "which means that they're in more control of their physiology, and they're not allowing this fight-or-flight response to drive them into action."

But in Weirton, officials said it wasn't just Mader's failure to shoot that got him fired. City Manager Travis Blosser said other reasons included "illegal searches in a vehicle, to the use of profanity with citizens and then also contaminating a crime scene of a potential homicide investigation."

The city manager and police chief would not comment further for this story.

West Virginia State Police Sgt. Jim Gibson, who led an investigation of the shooting, told NPR that he thought Mader believed he was doing the right thing — but that the town of Weirton was justified in deciding that for a variety of reasons, Mader wasn't cut out to be a policeman.

Mader said he still wants to be a cop and wishes things hadn't happened so quickly that night.

"If I had maybe 30 more seconds, maybe it would've went different," Mader said. "Maybe I could have talked him down and just put him in handcuffs that night."

The ACLU has been in touch with Mader, and he's considering legal action. In the meantime, he's supporting his wife and their two kids as a commercial truck driver.