Accessibility links
Not My Job: We Quiz Sen. Bernie Sanders On KFC's Colonel Sanders This week, we welcome the world's foremost Larry David impersonator (and 2016 Democratic presidential candidate) onto the show. 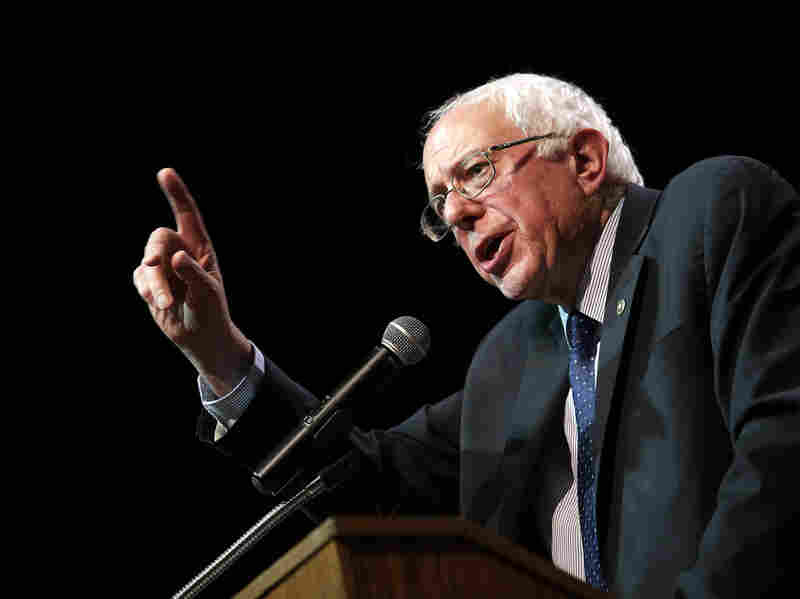 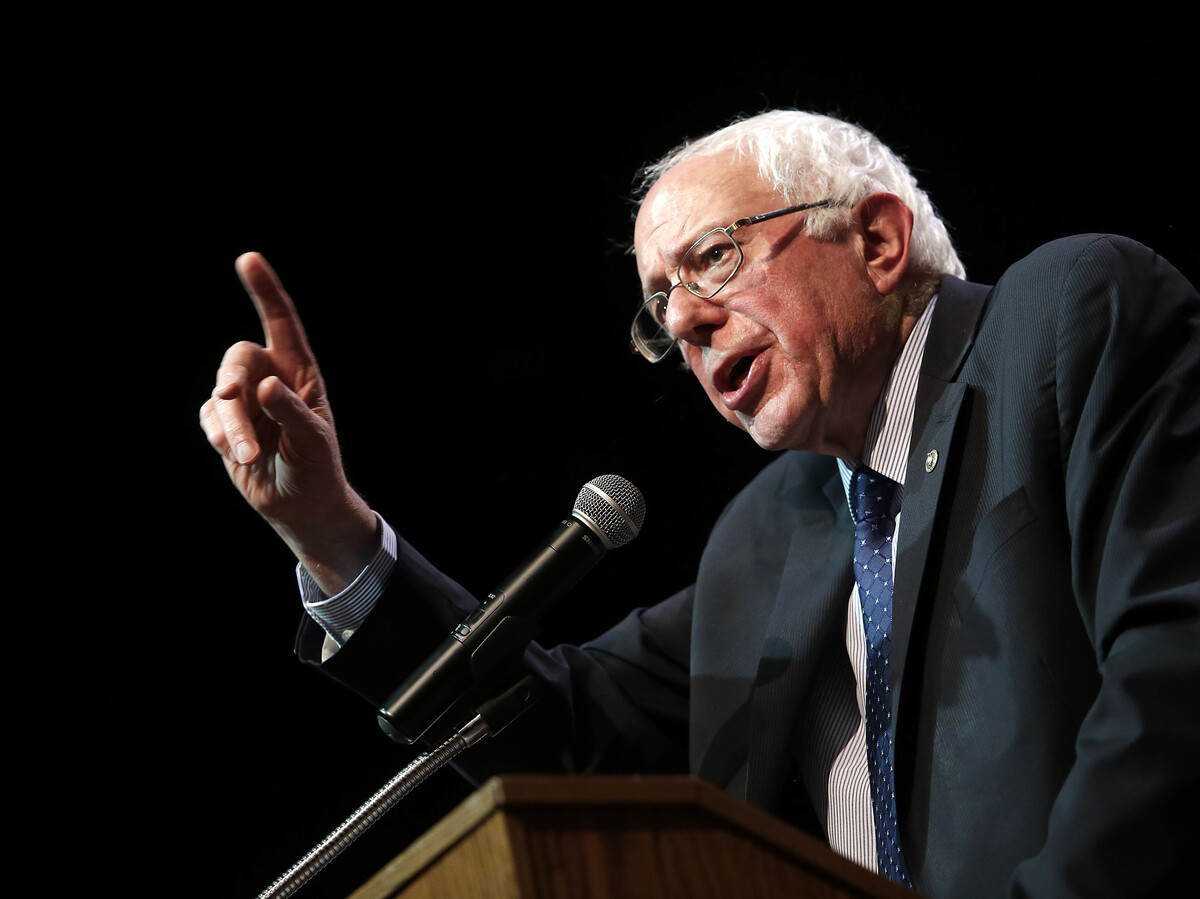 This week, we welcome the world's foremost Larry David impersonator (and 2016 Democratic presidential candidate) onto the show.

Since Not My Job is all about asking important people irrelevant questions, we'll quiz Sen. Bernie Sanders on Colonel Sanders, founder of Kentucky Fried Chicken.

And now the game where we make important people wonder how much more important they have to be in order to have avoided this. It's called Not My Job. So a few years ago, Senator Bernie Sanders of Vermont was approached by an aide about running for president in 2016. His response was more or less, I'd have to be crazy to do that. Well, if he wasn't crazy then, he sure is by now. Senator Bernie Sanders, welcome to WAIT WAIT... DON'T TELL ME.

BERNIE SANDERS: Thank you very much.

SAGAL: So I was reading about that very conversation in your new book. You've written a book about your campaign and your philosophy. This one's going to be a hot property at the Trump rally book burnings, I'm sure.

SAGAL: When it was first suggested to you that you, an independent socialist of Vermont, could run for president, what did you say?

SANDERS: Well, other than the fact that we had no money, no political organization and we were taking on the entire Democratic establishment - other than that, I thought we were in pretty good shape.

SAGAL: Was it fun? Did you actually enjoy yourself through that grueling process?

SANDERS: I enjoyed many aspects of it.

SANDERS: Not all of it, needless to say.

SAGAL: All right. What's the worst thing about running for president?

SANDERS: I think the nature of media coverage was very difficult for me in the sense that the most important issues that we tried to deal with - those were not necessarily the issues that the corporate media were particularly interested in.

SANDERS: That was a major issue, as well. You got it.

SAGAL: I know. But there was a lot of coverage of your hair. Did you actually ever get self-conscious about it and go, maybe I should comb it.

SAGAL: We are told by our friend from Vermont, Tom Bodett, that you are the thing that unifies all Vermonters no matter - whether politics - no matter if they're farmers or tech guys. They all love Bernie. So what's the secret for making everybody in Vermont love you?

SANDERS: Well, I don't think everybody in Vermont loves me.

SAGAL: The first part of your book, where you talk about your background in Vermont, is interesting. You were on a farm for a while, which must've been interesting for a guy from Brooklyn. You - did you, in fact, record a folk album?

SANDERS: Well, a guy I knew said, why don't you come on down? We're going to record something. There were some really very fine Vermont musicians. And I kind of got into it. So it really is an important CD because it is the worst album in the history of music.

SANDERS: Yeah, it's about the worst.

SAGAL: Would you say it's in the top 1 percent of the worst albums in the history of music?

SANDERS: The top one-tenth of 1 percent.

SAGAL: You also have something in common with the other senator from Vermont, Patrick Leahy, in that you have been in movies.

SANDERS: I have been in several movies. I first met Susan Sarandon. Susan has become a very good friend - in a movie done in Vermont way back when called "Sweet Hearts Dance."

SAGAL: Yeah. And did you - are you in that movie? Do you play a character?

SANDERS: I am, yeah.

SAGAL: Was it a stretch?

SANDERS: No. I opened the door and said hello.

SANDERS: That was my role.

SAGAL: How did you do?

SANDERS: I thought I was great, actually.

SANDERS: What can I say?

FAITH SALIE: Senator Sanders, in 2010, you did this eight and a half hour filibuster...

SALIE: ...Which is kind of amazing and legendary. And I mean, I can talk. But eight and a half hours? Like, did you know what you were going to say? Or did you get to a point where it's just, you know, free association? And did you put in a catheter and stuff? What did you - how did you do that?

SANDERS: Well, the latter point is perhaps the most important.

SANDERS: Many people can talk for a long period of time. But controlling, you know, your urinary tract...

SANDERS: So the answer is, you know, we made it barely. Yes.

SAGAL: You made it barely.

SAGAL: Yeah, those filibusters do get a little harder as you get older. Am I right?

SANDERS: Well, what was interesting about that - I learned something which I did not know. What the doctor apparently told my staff is you should not stand in one place. You should move around. I guess if you don't, then you have circulation problems.

SAGAL: So you're supposed to move around...

SANDERS: So the next time you do a filibuster, keep walking around.

SANDERS: Don't stay in one place for eight or nine hours.

SAGAL: I have a feeling your advice about filibusters might come in handy in the upcoming session. It'll be like, yes, it's 25th hour. And Bernie is still doing laps around the Senate chamber.

SAGAL: Well, Senator Sanders, we are delighted to talk to you. And we've asked you here this time to play a game we're calling...

SAGAL: You are, of course, Senator Sanders. We thought we'd ask you, then, about Colonel Sanders...

SAGAL: ...The real man who was a real person named Harland Sanders. He founded Kentucky Fried Chicken. Answer two out of these three questions about Colonel Sanders correctly - you win our prize for one of our listeners, the voice of Carl Kasell telling them to watch their cholesterol.

SAGAL: So, Bill, who is Senator Bernie Sanders playing for?

SAGAL: So first question - Harland Sanders, the future colonel, tried and failed at a lot of businesses before he stumbled on the fried chicken business. For example, his career as a lawyer ended when what happened? A, he referred to a judge as your royal lardbutt (ph).

SAGAL: B, he got into a fistfight in court with his own client. Or C, one of his clients was not only convicted but was declared extra, extra guilty.

SANDERS: Let's go with B.

SAGAL: You're going to go with B, the fistfight?

SAGAL: You're right. And they approve.

SAGAL: Yeah, the good colonel had a temper.

SANDERS: That gets me an extra vote from Ohio.

SAGAL: Yeah, you are.

SAGAL: By the end of this, you'll have won the state in retrospect. Here we go.

SAGAL: Next question - the colonel's first big break as a restauranteur came when he was running a service station with a restaurant and managed to beat the competition across the street. How did he do it? A, he got into a gunfight with the other owner. B, he moved his entire building half a mile down the road so motorists got to him first. Or C, he simply set fire to the other owner's restaurant.

SAGAL: You're going to go - he moved the building half a mile down the road? That would've been clever. But it wasn't violent enough for the colonel.

SAGAL: He actually got into a gunfight. It's a famous...

SAGAL: ...Famous part of Kentucky Fried Chicken lore. In the gunfight, which - they didn't like each other - he didn't - the colonel didn't kill anybody. But the other owner did, got sent to jail, clearing the market for the colonel.

SANDERS: There you go.

SAGAL: Colonel Sanders sold the Kentucky Fried Chicken, once he started the business, for only $2 million. And he became rather bitter about that. In fact, the company then paid him $1 million more just to stop him from saying things about KFC, like which of these?

A, quote, "might as well call it Kentucky Fried Rat the way it tastes." B, quote, "crispy recipe is nothing in the world but a damn fried dough ball stuck on some chicken." Or C, quote, "better hold on to that bucket, folks, cause your meal's coming back for seconds."

SANDERS: I think I'm going to be consistent and stay with B again.

SAGAL: You're going to go with B? And you are right, Senator Sanders. That's what he said.

SAGAL: Colonel Sanders - not a happy man. Bill, how did Senator Bernie Sanders do on our quiz?

SAGAL: Senator Bernie Sanders of Vermont has a new book. It's called "Our Revolution" - about his history-making run for the White House and the situation he sees in our country. Senator Sanders, thank you so much for joining us.

SANDERS: Thank you very much.

THE CHORDETTES: (Singing) Mr. Sandman, bring me a dream. Make him the cutest that I've ever seen. Give him two lips like roses and clover.

SAGAL: In just a minute, crack open the pistachios. It's our Listener Limerick Challenge. Call 1-888-WAITWAIT to join us on the air. We'll be back in a minute with more of WAIT WAIT... DON'T TELL ME from NPR.