Accessibility links
The Life Of Danny Barker, Who Saw Jazz As 'A Ride On A Royal Camel' Barker played with everyone from Billie Holliday to Cab Calloway to Jelly Roll Morton. Scott Simon speaks with Music Inside Out host Gwen Thompkins about the late banjo player and guitarist's legacy. 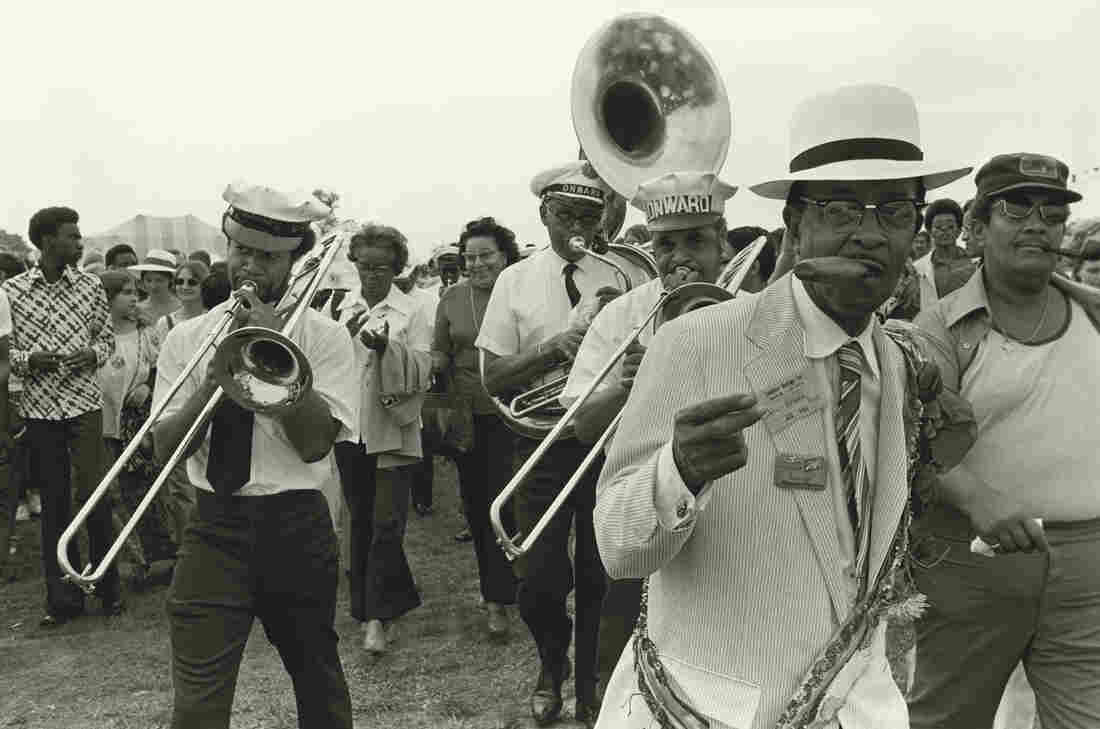 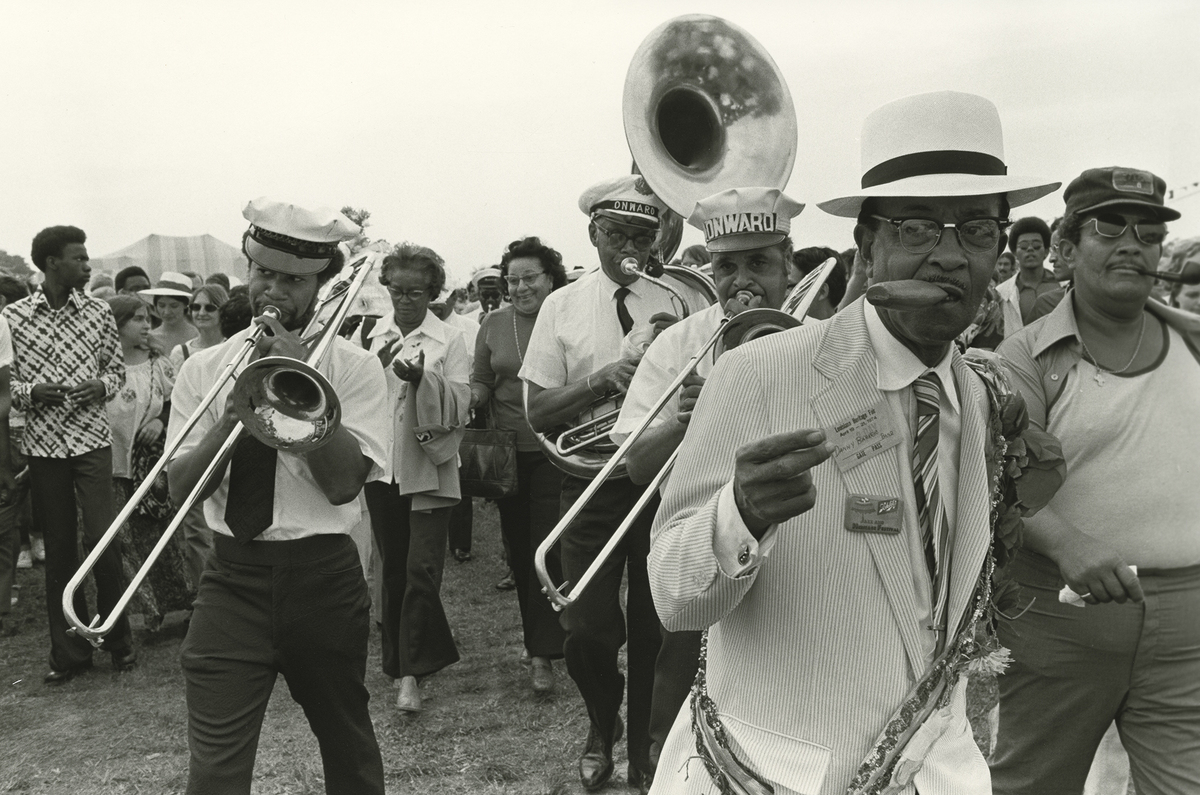 Sporting a plastic cigar in his mouth, Danny Barker leads the Onward Brass Band in a parade at the 1974 New Orleans Jazz and Heritage Festival.

Danny Barker died in 1994, but he's having a bang-up December. The New Yorker is running a story online about the long and eventful life of the New Orleans banjo player and guitarist — and the Historic New Orleans Collection has just re-issued his memoir, A Life in Jazz.

Danny Barker came up in New Orleans at a time when jazz was just getting started. Over the course of a more than 70-year career, he played with Louis Armstrong, Cab Calloway, Billie Holiday, Wynton Marsalis and Dr. John. In his later years, Barker started a youth band in New Orleans that would help bring the brass band tradition into the 21st century.

Gwen Thompkins hosts the public radio show Music Inside Out. She wrote the New Yorker story, as well as the introduction to the new edition of Barker's memoir. She joined NPR's Scott Simon to talk about the man and his music; hear their conversation at the audio link, and read an edited version below.

Gwen Thompkins: He came from one of the great musical clans of New Orleans, the Barbarin family. His grandfather played in a brass band with some of the early greats of jazz: King Oliver, Louis Armstrong. And then also, Danny Barker's uncle, Paul Barbarin, he played with Armstrong as well as Henry "Red" Allen.

So, Danny Barker tells this really terrific story: His family went up to see Paul Barbarin in Chicago when Danny Barker was about 10 years old — that's around 1919, right? He and his little relative, a 12-year-old, they're walking around one morning on the South Side of Chicago. They're peering into clubs, and they see a bunch of men and women kissing and canoodling on the dance floor of this club. And so once this 10-year-old Danny sees this sight — lovers on the dance floor — and he sees this band, he's like, "I want to be a musician. I want to do this full time." [laughs]

Barker brought his banjo up from New Orleans, and then within just a few weeks that banjo was stolen. And that was kind of the best thing that ever happened to Danny Barker, because at that time, at the beginning of the 1930s, banjo was out in the big bands. And so guitar came in. He learned to play the guitar lickety split. And then he was able to compete with some of the great rhythm guitarists of that era.

Danny Barker was also a songwriter. Tell me about the song "Save the Bones for Henry Jones."

"Save the Bones for Henry Jones" was probably his best known, because it was recorded by Nat King Cole and Johnny Mercer. But you know, Danny Barker was the king of the double entendre, if not the triple entendre, in music. And he wrote a lot of novelty songs, particularly for his wife, who was a blues singer called Blue Lu Barker. She wasn't big star, but she was very good at what she did, which were sort of very naughty blues songs.

Why did it take so long for Danny Barker's memoir, A Life in Jazz, to get published?

When he began peddling this memoir — this is back in the '40s — there weren't an awful lot of African-American jazz musicians who were getting book deals. Even though Barker had more than just his life to talk about — he had done all kinds of research on the early days of jazz, looking up and interviewing older musicians, people who predated Louis Armstrong, for instance. As far as Barker was concerned, jazz was sort of a noble calling. And he wanted people to understand that. He wanted people in New Orleans to understand that this was our birthright; he wanted people around the world to understand that this is a marvelous gift of music from the United States.

One of the fellas I interviewed is a trumpet player called Greg Stafford. And he told me that Barker once told him, "Playing this music is like taking a ride on a royal camel. That's a great ride, to be riding on a royal camel with the kings and queens. That's what it's like when you learn this music."