Accessibility links
For Mavis Staples, The Music Of The Civil Rights Era Couldn't Be More Relevant Today The gospel legend is now a Kennedy Center honoree. She discusses developing an iconic voice at a young age, her family's confrontations with racism and why she's a big fan of Chance The Rapper. 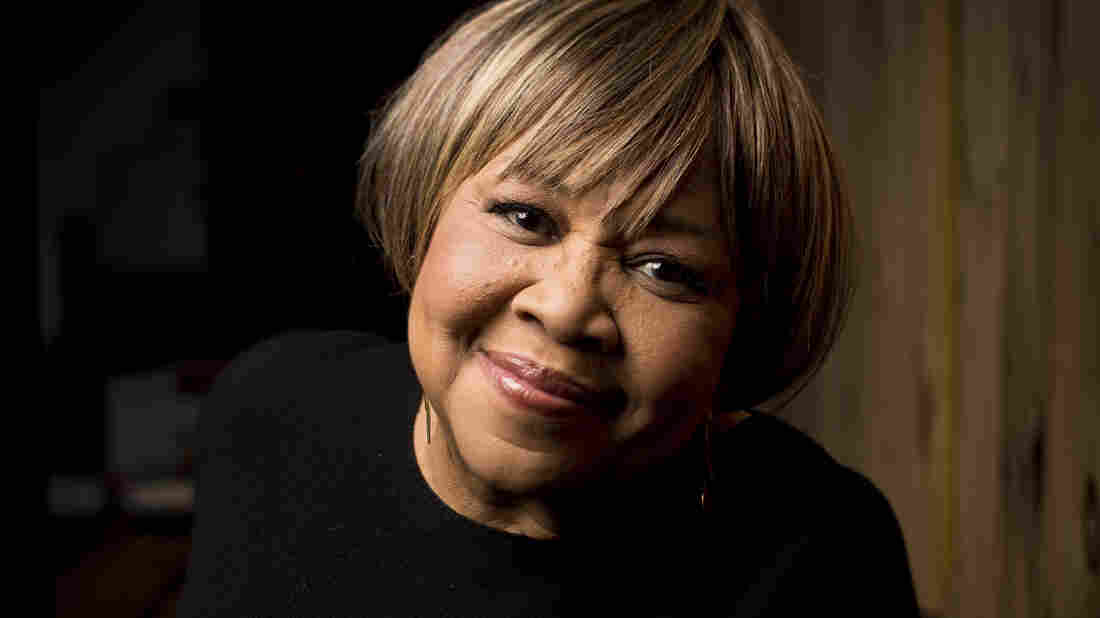 "I tell you," Mavis Staples says, "I watch the news sometimes and I think I'm back in the '60s." The gospel legend was recently recognized at the Kennedy Center Honors. Chris Strong/Courtesy of the artist hide caption 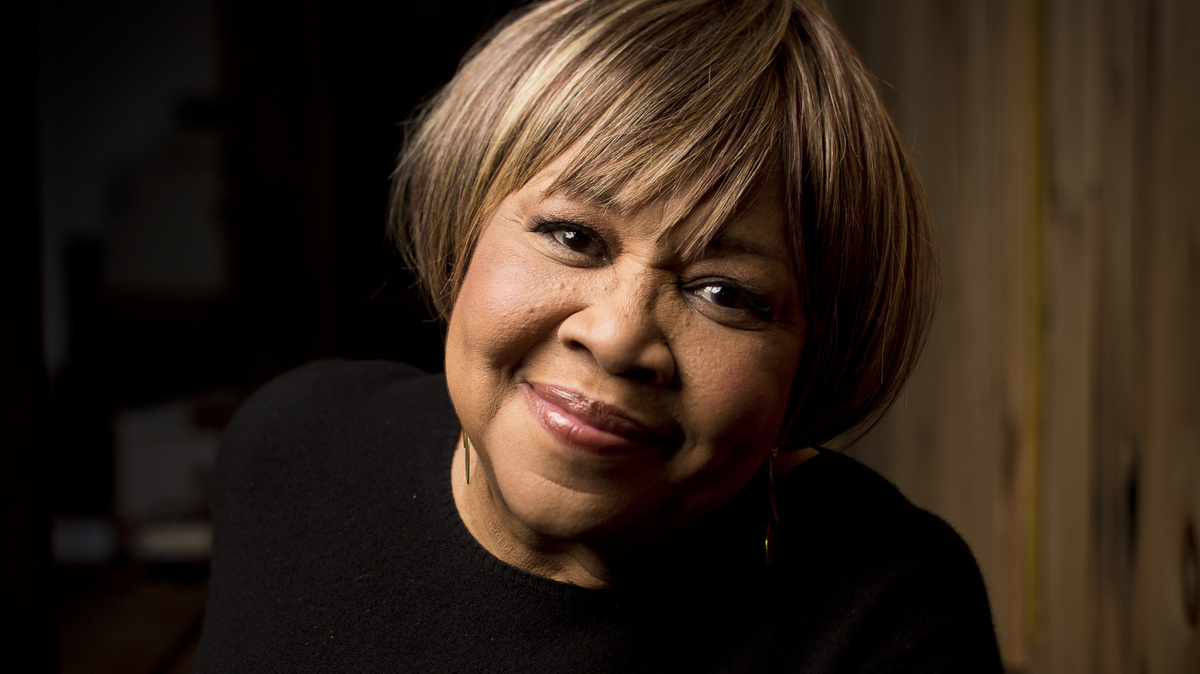 "I tell you," Mavis Staples says, "I watch the news sometimes and I think I'm back in the '60s." The gospel legend was recently recognized at the Kennedy Center Honors.

Chris Strong/Courtesy of the artist

Born in Chicago, Mavis Staples was barely a teenager when she began a career in gospel, singing with her father Roebuck "Pops" Staples and her sisters and brother as The Staple Singers. With Mavis' powerful vocals and her father's Mississippi-inspired blues guitar, the Staple Singers moved beyond the church and into folk, pop and R&B stardom. But the group was also prominent in the civil rights movement, performing at marches and rallies, and was close to Dr. Martin Luther King Jr.

The past few years have afforded Mavis Staples a lot of recognition from the wider world. She won a Grammy for the album You Are Not Alone in 2011, and just last week she was celebrated by President Obama and her fellow artists when she received her Kennedy Center Honor; you can see the ceremony on CBS later this month. On top of all that, she released a new album this year, Livin' on a High Note, with songs written by an all-star group of younger artists.

Mavis Staples joined NPR's Michel Martin to talk about developing an iconic voice at a young age, dealing with racism on the road and why she's a big fan of Chance The Rapper. Hear their conversation at the audio link, and read an edited version below.

I read someplace that when your family first got on the radio, when you first started making records, people didn't believe that you were a little girl. You were, like, 13 at that time.

Yes I was! Our first record, I was singing a ladies' bass. The disc jockeys would say, "This is little Mavis Staples singing this part on 'Uncloudy Day.' " And people would actually bet that I was not a little girl: I had to be a man or a big fat lady. And I was just a little skinny knock-kneed girl. Even at live shows, they would bet when it came to that part. One man was really mad at me — he told me, "Little girl, I bet on my paycheck!" And Pops told, him, "Well, see, you shouldn't bet. 'Cause there she is."

You grew up in Chicago, but your dad was from Mississippi, and there was a point at which — just to be on the circuit — you would have had to start touring in the South. Do you remember what that was like? What did your dad say to prepare you for all this?

He let us know. "Now, you're going to the South, and everybody don't like you. You're gonna see signs on the water fountains and on doors. Just know who you are; know that you're a beautiful people. Don't get discouraged." But I tell ya, certain things we couldn't get over. We had several run-ins.

I heard there was a time that you all were arrested in Memphis.

Well, my father — we beat up a white man. Now, I was the night driver, and I stopped to get gas. Everybody had been sleeping. The guy came to service the car; when he finished, he came to the window to get his money. I asked him to wash the windshield, because the bugs were all in it, of course. And he looked at me a long time, then he finally took the rag and he squashed around, and he came for his money again. So I asked him for a cash receipt. That made him angry.

He told me, "If you want a cash receipt, N-word, you come over to the office." Pops heard, and Pops said, "Mavis, pull over there." Pops got out and went in, and he spoke to the guy. I'm sure he was asking him, "Why would you call my daughter that word? And I saw this young man shaking his finger in Daddy's face, and just as he did that, Pops clocked him.

He came after Pops and they fought over into the part where they fix cars. Pops slipped out, and this guy grabbed a crowbar. My sister ran in, and she's beating him in his back. He got away from her, and he's heading to his office. That's when I woke up my brother — I said, "Purvis, Purvis, they're fighting!" And Purvis came from under the coach like Superman coming out of that phone booth.

How did you all get out of there?

Well, they all got back in the car, huffing and puffing, and Pops said, "Mavis, drive." And as I got a little ways, I saw these lights behind me. I was on that bridge that divided Memphis and West Memphis, Ark. And when I got across the bridge I saw these three cars pulled around. Dogs were barking, and they put shotguns on us and had us standing on the highway with our hands over our heads.

Then they went in our trunk, and this was the killer: [We kept our money from touring] in a cigar box. And they said, "Well, this is what we're looking for." The guy at the service station had told them that we didn't pay for our gas and we robbed him. That was my most frightening time.

Kind of explains why the song "Why? (Am I Treated So Bad)" got to be a hit.

That came to be Dr. King's favorite. We would have to sing it at ever meeting; Dr. King would tell pops, "Now, you gone sing my song tonight, right?"

I understand that in planning your latest album, Livin' on a High Note, you wanted it to be upbeat.

You know, I had done two albums with my friend Jeff Tweedy from Wilco. I'd been pretty mellow with Tweedy, but it was time for Mavis to break loose again, and come on out and let the world see that I could sing with the kids. We chose different songwriters for every song — Valerie June and Neko Case and Bon Iver. All of these people, they really came through for me. They wrote me some beautiful songs.

So before we let you go, I wonder if you have any thoughts for some of the artists coming up today who are singing about a lot of the same concerns that you had. I mean, "Why? (Am I Treated So Bad)" — somebody could have written that today.

Yes, that's true. And I tell you, I watch the news sometimes and I think I'm back in the '60s. It's all happening all over again. This kid Chance The Rapper, he's very good at explaining what's happening in the world today. There are very few; I wish there were more who would sing songs like "Respect Yourself," and "Reach out, touch a hand / make a friend, if you can."

Pops used to tell songwriters, "If you want to write for the Staple Singers, read the headlines. We want to sing about what's happening in the world today, and if it's something bad, we want to sing a song to try to fix it."