Barbara J. King, a professor emerita of anthropology at William and Mary, discusses whether Neanderthals had "religious capacity."

And now it's time for a new segment. About once a month, we plan to visit with one of the scientists who contribute to NPR's science and culture blog. The blog is called 13.7. It's named for the age of the universe, 13.7 billion years. Since December is a big month for religious celebrations in the United States, we're going to ask if a related species, the Neanderthals, also practiced religion. Barbara J. King has been thinking and writing about this. She is a retired professor of anthropology at the College of William and Mary, and she's with us now from member station WHRO's studios in Williamsburg, Va. Professor King, thanks so much for speaking with us for the very first of our chats.

MARTIN: So first of all, can you give us a short refresher on the Neanderthals? They are extinct. They are understood to be relatives of the human species. But isn't there some debate about just how closely related they are to modern humans?

KING: Yes. Well, paleoanthropologists have been clarifying these questions for us. We now know that Neanderthals are a separate species. So they are not primitive examples of Homo sapiens, but their own species. And it's true that populations of Neanderthals went extinct at about 40,000 years ago. At the same time, genes of Neanderthals live on in many modern human bodies now today.

MARTIN: So why are we asking this question about whether Neanderthals practiced religion? What gave rise to this question?

KING: Quite recently, a group of archaeologists found in a fascinating site some examples of what they think might represent a human funerary ritual by Neanderthals.

MARTIN: Tell me more about that. Where was it, and what exactly did they find? I understand it was actually rather dramatic.

KING: Yes. This was in a cave in Spain. And the archaeologists uncovered a grave of a toddler. And around the bones of this young child were many examples of animal horns, a rhinoceros skull. So the archaeologists began to wonder - what kind of ceremony might have gone on at such a location? Plus, we have many other examples from sites across Europe and Asia with similarly marked graves that show both intentional burial of Neanderthal bodies and some kind of symbolism surrounding that burial.

MARTIN: What are some of the theories that you're considering around what was found?

KING: One is that the Neanderthals, who we know were very cognitively advanced with big brains, were the first to figure out that if you bury bodies, both predators and disease are more likely to be avoided. Secondly, perhaps these graves are marked and even lovingly cared for because Neanderthals felt emotions and they wanted to respect and give tribute to companions and loved ones. So their ancestors could perhaps be venerated, but not in a religious context. The most fascinating hypothesis is that the Neanderthals had some notion of an afterlife and wanted to send off their dead companions in some kind of ceremony.

MARTIN: Does this discovery amplify our understanding of either the Neanderthals or when the habit of religious practice came into being?

KING: So it's not entirely the new discovery that is at the heart of my query. It's looking at the cross-cultural information taken together from sites in France, in Uzbekistan, in Spain. And altogether, they do raise this very interesting question of whether there's a deep evolution or at least evolutionary roots to religiosity. It's very much time to jettison that old stereotype of Neanderthals as stupid, brutish and shambling, you know, quote unquote, "cavemen."

We know that they hunted very intelligently, that they pursued raptors so they could use feathers to decorate their own bodies. And we know they buried their dead. So whether or not they had religion, we know that there was a lot of cognition and emotion and sociality going on at this time in our evolutionary history. And that tells us something about our own place in the world that I think is a great thing to know and to contemplate.

MARTIN: That's Barbara J. King. She's a contributor to NPR's science and culture blog called 13.7, which is the age of the universe. She's a retired professor of anthropology at the College of William and Mary, and she joined us from Williamsburg, Va. 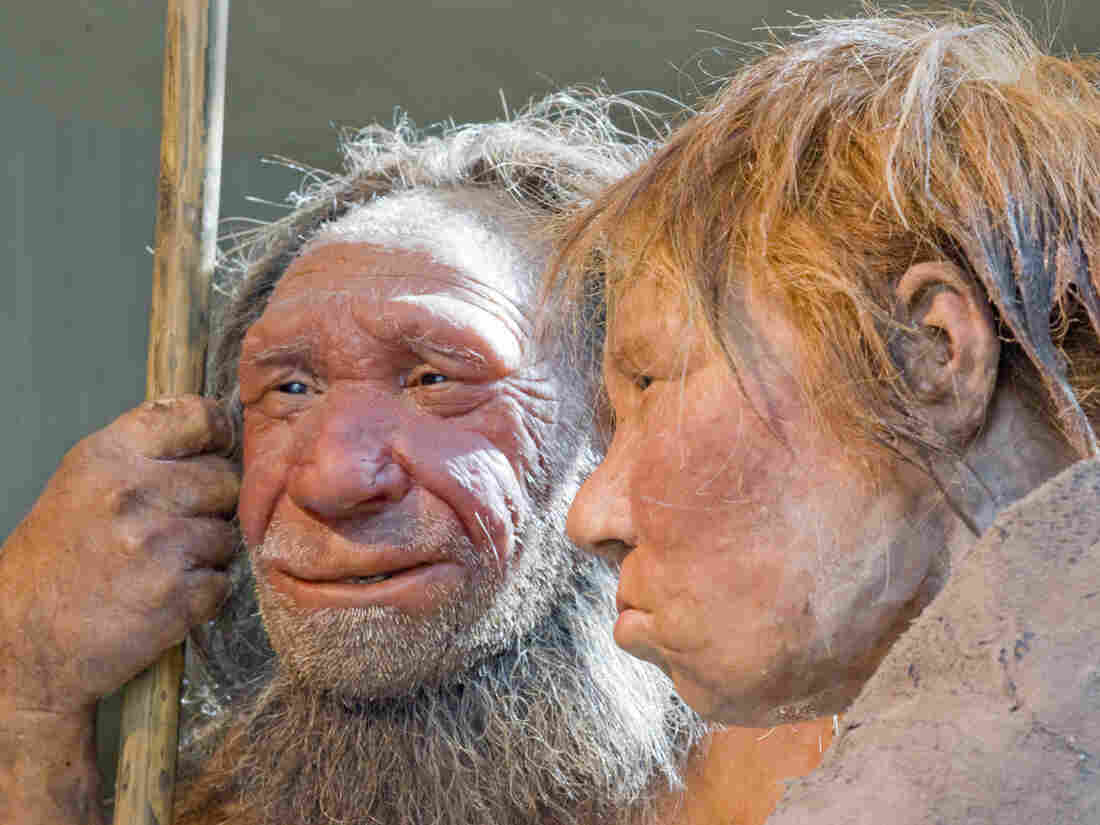 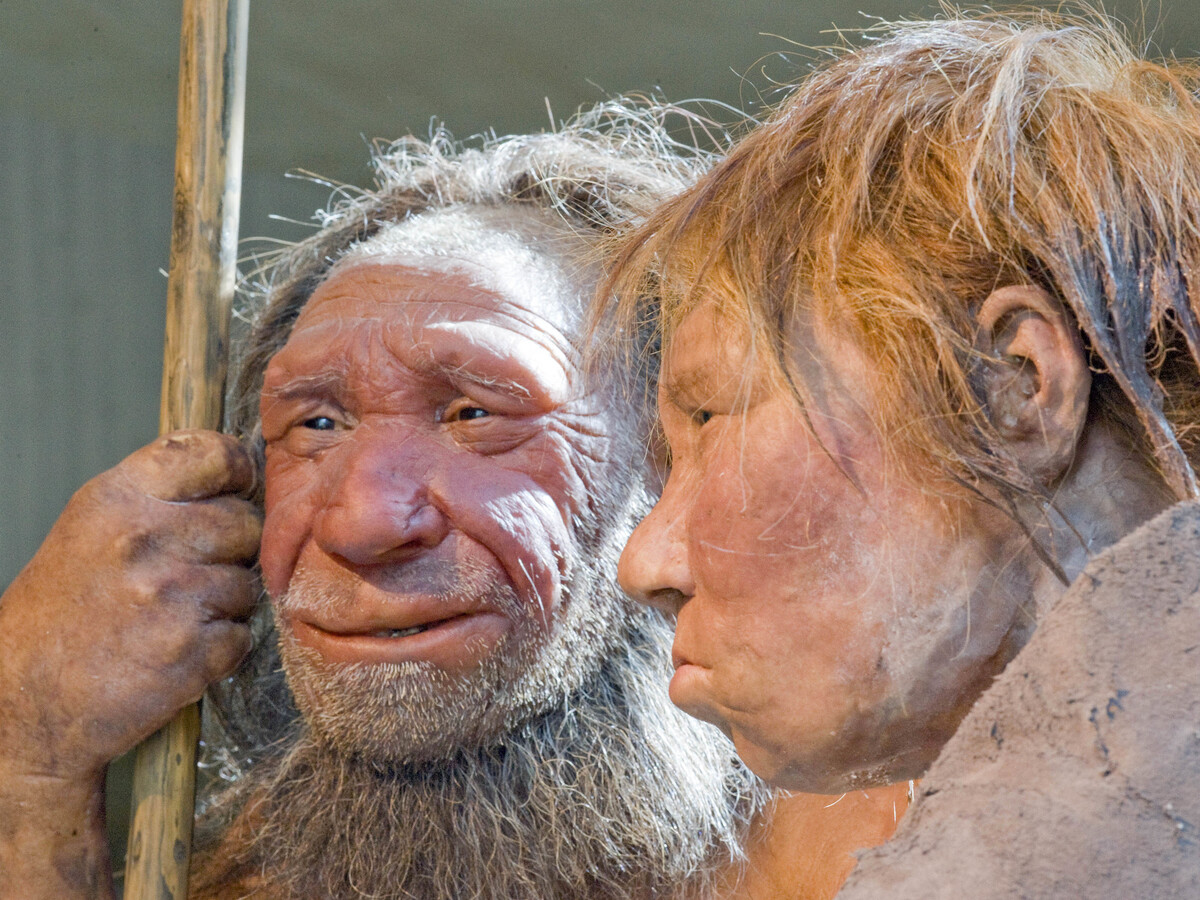 Imagine this scene: Inside a cave in Spain, a group of people gather around the grave of a toddler. Hearths with lit fires, marked by 30 horns of animals including bison and red deer, surround the grave. A rhinoceros skull is nearby.

At a conference this fall, archaeologist Enrique Baquedano and his colleagues described this scene as a probable funeral ritual held 40,000 years ago by Neanderthals.

That announcement contains a mix of both hard data — the child's bones and the animal horns and skull — and informed speculation suggesting that these data point to a community funeral ritual.

The archaeologists' scenario relates closely to questions I have been thinking about: Did the Neanderthals practice religion? How would we know it, if they did?

Let's approach these questions by placing Neanderthals in evolutionary context. It's now clear that Neanderthals are our cousins, not our direct ancestors or early members of our own species Homo sapiens. Known formally as Homo neandertalensis, Neanderthals lived in Europe and Asia, overlapping in certain places at certain time periods with Homo sapiens — and almost certainly interbreeding with them (with us!) on occasion.

For much of the time since their initial discovery in the 19th century, Neanderthals have been cast as enduring symbols of dumb, brutish cave people. We know better now, though.

Neanderthals built complex structures, captured birds to ornament themselves with feathers, and successfully hunted mammoth and other formidable megafauna with tools.

What Smart Aliens Could Teach Us About Survival

But does any of the evidence suggest that they were religious? It's notably tricky to infer religious behavior from material culture, as I've written about here before regarding Gobekli Tepe, a possible 11,000-year-old modern-human temple.

We do see hints of ceremonial responses to the dead at Neanderthal sites other than the Spanish cave. At Teshik-Tash in Uzbekistan, a Neanderthal child was buried and encircled by goat horns. At Regourdou in France, bear bones, plus a slab of rock topped by tools and another bear bone, were placed at a Neanderthal body positioned at the bottom of a depression. Bear bones in an adjacent room at Regourdou suggest to some archaeologists that bear meat might have been consumed there as a funeral rite.

Skeptics like archaeologist Rob Gargett point out both formally and informally that natural (or taphonomic) explanations may suffice to explain some of these occurrences: In other words, it may not be Neanderthal agency that we're seeing at all.

Looking at the evidence collectively, though, I think at least this conservative conclusion is warranted: Some Neanderthals buried their dead with purpose and care.

Next comes our central question: Did Neanderthals engage in some way with the supernatural or the sacred?

Caution is required here. The bones and artifacts, after all, don't clue us in to the meaning-making that went on in Neanderthal groups, and we can't just overlay present customs onto the past.

Perhaps the Neanderthals simply wanted to bury their companions' bodies in order to protect themselves from predators, or disease, or both.

But, then, why mark the burials as elaborately as the Neanderthals have done in some places?

Maybe the symbolic marking was the Neanderthals' way of showing respect and care for people they had known and loved in their lives.

Either or both of these explanations may be wholly adequate to explain the evidence.

Given their intelligence, it seems to me likely that the Neanderthals contemplated, in some way, the mysteries of life. Wouldn't they have wondered not only about unexpected and surprising weather events and sky events but also what happens when our lives comes to an end? If they thought about these questions, did they do so with awe, dread or reverence?

More relevantly for a scientific analysis is this question: Did they come together in groups to evoke gods, spirits or ancestors to help themselves make sense of the world?

I emailed anthropologist and Neanderthal expert John Hawks at the University of Wisconsin to ask for his thoughts about Neanderthals and religion.

His response, in part, was this:

"Religion, as many people recognize it, is built from highly detailed symbolic narratives. If we separate that out, though, and look only at the material manifestations that an archaeologist might find, there is really very little in most religious traditions that is different from what Neanderthals do.

"So I don't think it is at all improbable that the Neanderthals had a humanlike religious capacity. But to be honest, I think this is not what many Americans or Europeans would recognize as religion."

Hawks' basic idea fits with my own: Religion is best understood across cultures and time periods as practice rather than only belief. Some religions, of course, feature sacred texts in which a set of beliefs is set forth. In these cases, what you believe about a god or other sacred forces may really matter. In many human societies past and present, though, no text exists, just everyday life — appeasing gods or spirits, honoring the ancestors — that is shot through with a sense of the sacred or the supernatural.

It's within this context that the case for Neanderthal religion — for ritual practices steeped in connecting to the sacred world — is most convincingly made.

It's no accident that I'm writing about this topic in December. It's a month that, for many people, includes sacred holiday celebrations. Even for those of us who aren't religious, it's a time of the year packed with meaning-making through social gatherings and rituals.

How fascinating it is to take seriously the idea that the deep roots of human meaning-making ritual, and even of religiosity, may go as far back as the time of the Neanderthals.