Accessibility links
Billy Eichner Makes A Career Out Of Love/Hating Celebrity Culture In his Billy on the Street series, Eichner roams the sidewalks of Manhattan, asking strangers open-ended questions about the entertainment industry. If he likes their answers, he gives them a dollar. 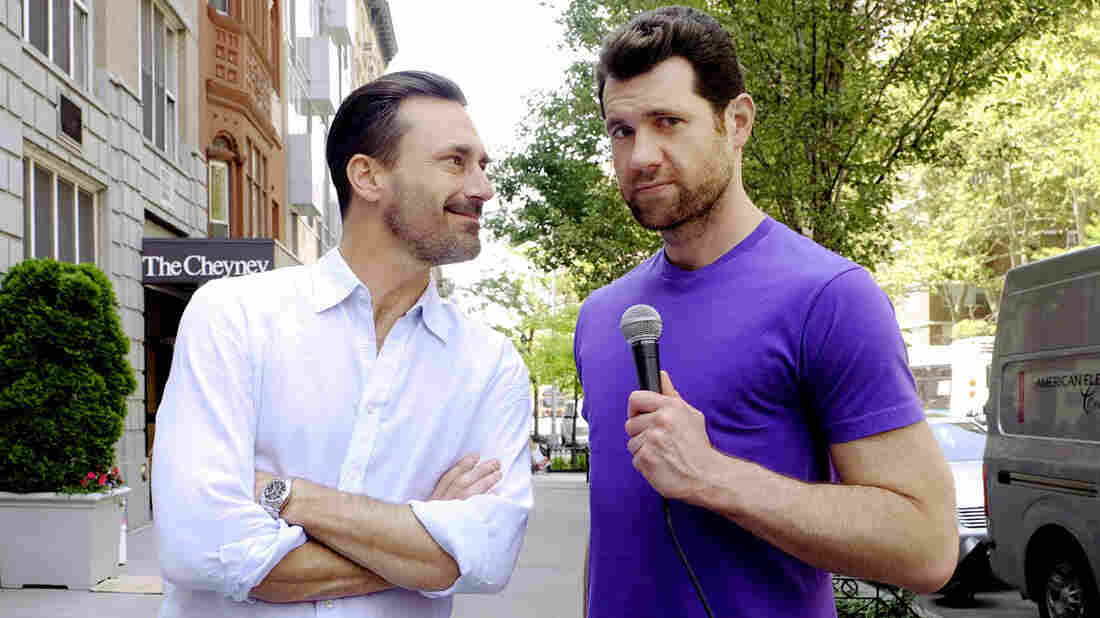 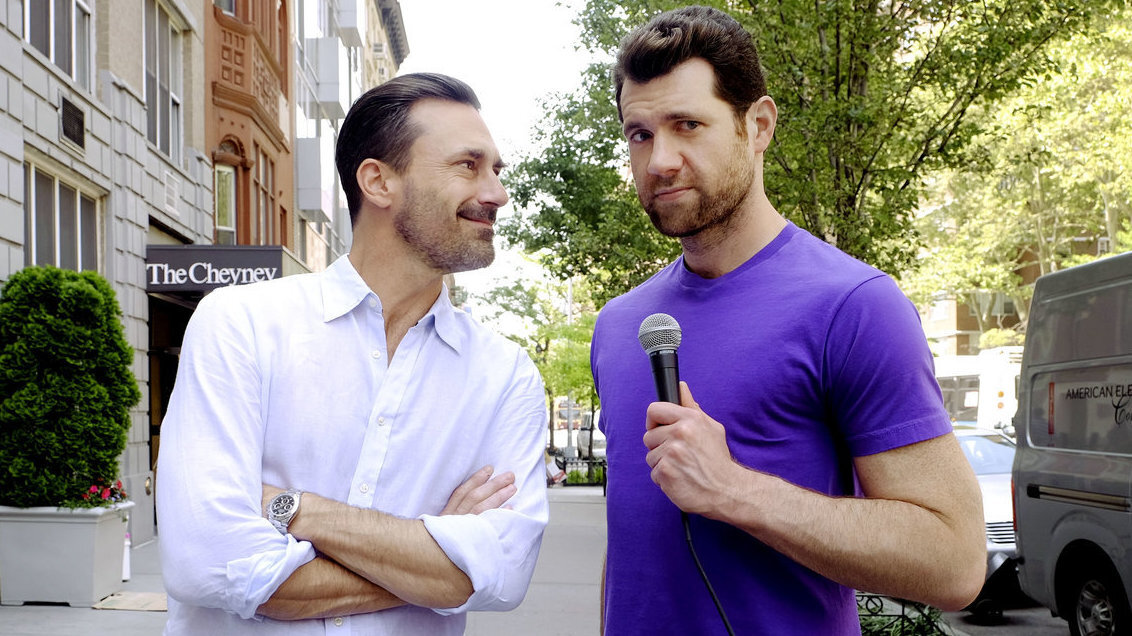 Billy Eichner (right) chats with actor Jon Hamm during a taping of Billy on the Street. Eichner also stars in the Hulu series, Difficult People.

Growing up, Billy Eichner was fascinated with the entertainment industry. He poured over Variety magazine and watched all the award shows with his parents, often making lists beforehand of who would be nominated and who would win.

"Entertainment, Hollywood, award shows — these are the things that really captivated me," he tells Fresh Air's Terry Gross.

Now, Eichner indulges his passion for all things pop culture as host of the truTV series, Billy on the Street. On the show, Eichner roams the sidewalks of Manhattan with a microphone, asking strangers open-ended questions about pop culture, and offering them a dollar if he likes their answers.

"The whole show is about my own personal love/hate relationship with my interest in the entertainment industry," he says. "As I've gotten older I've realized it's ridiculous. Award shows are fun but completely arbitrary and absurd, and yet I will watch every single one of them. Billy on the Street is inspired by that love/hate."

On the concept of Billy on the Street as a game show, in which a dollar is awarded for "correct" answers

When we started out, the idea was to make a game show, but where the questions were subjective. So a person would "win" if we had the same opinion, if they agreed with me, or even if we just get along, if I simply liked you. Their prize would be a dollar. I just thought that was funny. ... You'd be surprised though, people really want that dollar!

On the unusual prizes celebrity contestants can win on the show

We make prizes. We have a whole art department on Billy on the Street. We give away dioramas that we've made. Last year we gave a diorama to Julianne Moore of Claire Danes signing her contract with Latisse [a prescription drug that claims to lengthen eyelashes].

We gave Tina Fey marionettes of the cast of Transparent, which we had created. ... We gave oven mitts featuring quotes from Brokeback Mountain to Tina Fey, so one of them said, "You don't come up here to fish!" and another one said, "I ain't no queer!" Which is lovely on an oven mitt.

On the career advice he got from Joan Rivers

I remember emailing her, maybe this was 2010 or something like that ... and I said, 'Joan, I don't know what to do. The New York Times wrote about me, people write about me 'Oh he's a genius, blah blah blah ...' and I'm not saying any of that is true, but people were very complimentary of my live show and of the videos, but no one was hiring me.' ...

So I went to see her and she said, 'It took me seven years. It might take you longer.' She was talking about the time between when she started stand-up and when she first, I think, got on The Tonight Show. And she said, 'You gotta stick with it.' And she was very complimentary and very encouraging.

On losing both of his parents before his career gelled

It's been a very strange trajectory, because I struggled for so many years, I mean I was doing these videos, I was doing these live shows, I had a lot of fans in New York, the press would write about me, but I couldn't get a paying job, and so my father and I were really like a team. He was very supportive, he'd come to every single one of my live shows.

My dad passed away on March 30, 2011, and about six weeks later I finally sold Billy on the Street as a TV show, and in December of that year it was on the air on the network it started on, Fuse, and that all happened in one year.

So that obviously was, to say the least, very bittersweet, because my dad just missed seeing it all come to fruition finally and certainly has missed everything that's happened for me since. And a lot of nice things have happened for me. So that is tough, but I also know that they were so great that that really has stayed with me. They would've been so excited.