Accessibility links
13 Times Russian Hacking Came Up In The Presidential Campaign Donald Trump asked Monday morning why Russian hacking wasn't "brought up before the election." It was. Many times. But intelligence agencies hadn't said the hackers aimed to help Trump — until now. 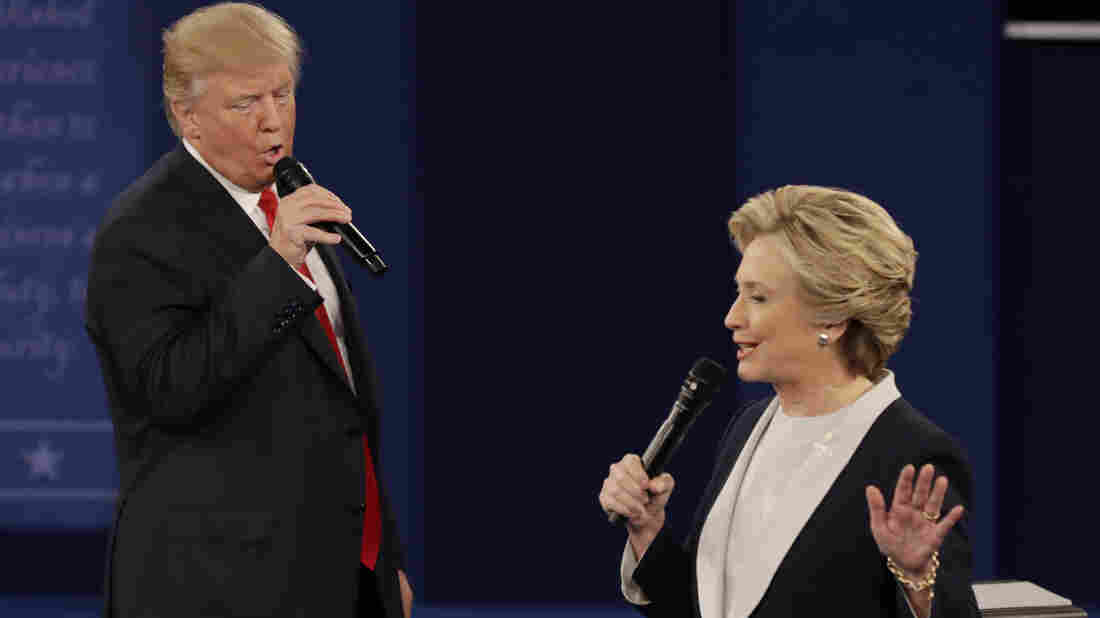 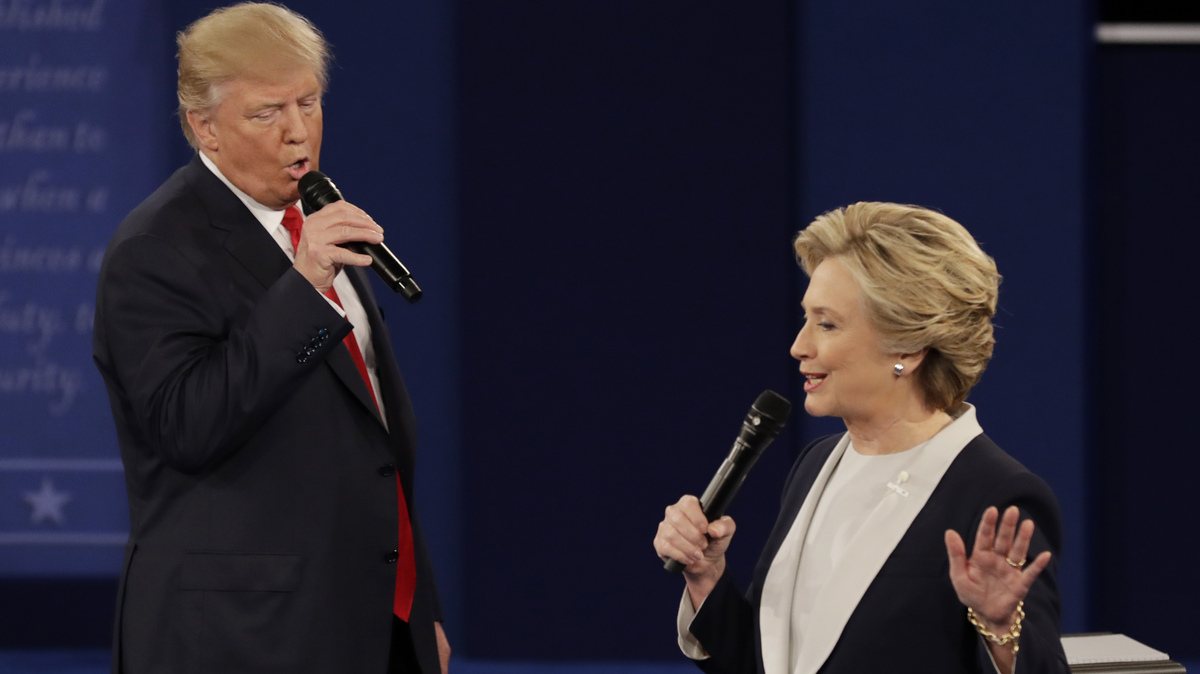 On July 27, Donald Trump created one of the most surreal moments of the presidential campaign, when he encouraged Russians to hack his opponent's email.

"Russia, if you're listening, I hope you'll be able to find the 30,000 emails that are missing," Trump said, speaking about Hillary Clinton's deleted emails from her private email account from her time as secretary of state. "I think you'll probably be rewarded mightily by our press."

So it was a bit of a surprise when on Monday morning, he implied in a tweet that hacking hadn't been a major topic during the election:

Unless you catch "hackers" in the act, it is very hard to determine who was doing the hacking. Why wasn't this brought up before election?

The tweet fits a pattern that Trump has employed before, using Twitter to spread misinformation that fits a narrative he wants to spin. Last month, he insisted that he, in fact, won the popular vote, but that "millions" of people voted illegally and handed that win to Hillary Clinton. Likewise, this tweet plays into a story that the hacks are only in the news now because Democrats want to blame the Russians for their loss in November.

So, to be clear: Many people (including Trump himself) did bring it up. The topic came up in general-election debates, and both he and his opponent addressed it in their answers. Throughout the campaign, there were suspicions and investigations into the possibility that Russians were behind not only a hack of the Democratic National Committee — the one Trump referenced in the above quote — but also a hack of Clinton adviser John Podesta's emails and state voting registration systems.

And while it's true that Trump often shrugged off any indications of hacking, it most definitely was addressed often during the campaign. What's different about the newest CIA assessment is that it concludes the Russians were trying to sway the election in Trump's favor. During the election, intelligence agencies connected Russia to the hacks, but didn't go as far as saying they were intentionally trying to help Trump.

Here are 12 more of the many examples out there:

1. Reports of the DNC's early suspicions

"Nearly two months earlier, in April, the Democrats had noticed that something was wrong in their networks. Then, in early May, the DNC called in CrowdStrike, a security firm that specializes in countering advanced network threats. After deploying their tools on the DNC's machines, and after about two hours of work, CrowdStrike found 'two sophisticated adversaries' on the Committee's network. The two groups were well-known in the security industry as 'APT 28' and 'APT 29.' APT stands for Advanced Persistent Threat—usually jargon for spies. CrowdStrike linked both groups to 'the Russian government's powerful and highly capable intelligence services.' " — Motherboard, July 25, 2016

"American intelligence agencies have told the White House they now have 'high confidence' that the Russian government was behind the theft of emails and documents from the Democratic National Committee, according to federal officials who have been briefed on the evidence." — New York Times, July 26, 2016

"One official tells NBC News that the attacks have been attributed to Russian intelligence agencies. 'This is the closest we've come to tying a recent hack to the Russian government,' the official said." — NBC News, Aug. 30, 2016

"As far as the cyber, I agree to parts of what Secretary Clinton said. We should be better than anybody else, and perhaps we're not. I don't think anybody knows it was Russia that broke into the DNC. She's saying Russia, Russia, Russia, but I don't — maybe it was. I mean, it could be Russia, but it could also be China. It could also be lots of other people. It also could be somebody sitting on their bed that weighs 400 pounds, OK? You don't know who broke in to DNC." — Donald Trump (presidential debate, transcript via CNN), Sept. 26, 2016

"Nearly half of the states in the U.S. have recently had their voter registration systems targeted by foreign hackers, and four of those systems have successfully been breached, sources tell ABC News.

"That amount of targeting and actual infiltration into state election-related systems is significantly larger than the U.S. government has been willing to acknowledge.

"Hackers working on behalf of the Russian government are suspected in the onslaught against more than 20 state election systems, according to sources with knowledge of the matter." — ABC News, Sept. 29, 2016

"But increasingly, we are seeing cyber attacks coming from states, organs of states. The most recent and troubling of these has been Russia. There's no doubt now that Russia has used cyber attacks against all kinds of organizations in our country, and I am deeply concerned about this. I know Donald's very praiseworthy of Vladimir Putin, but Putin is playing a really ... tough, long game here. And one of the things he's done is to let loose cyber attackers to hack into government files, to hack into personal files, hack into the Democratic National Committee." — Hillary Clinton (presidential debate, transcript via CNN), Sept. 26, 2016

"The denunciation, made by the Office of the Director of National Intelligence and the Department of Homeland Security, came as pressure was growing from within the administration and some lawmakers to publicly name Moscow and hold it accountable for actions apparently aimed at sowing discord around the election.

" 'The U.S. Intelligence Community is confident that the Russian Government directed the recent compromises of e-mails from U.S. persons and institutions, including from U.S. political organizations,' said a joint statement from the two agencies. ' ... These thefts and disclosures are intended to interfere with the U.S. election process.' " — Washington Post, Oct. 7, 2016

"But, you know, let's talk about what's really going on here, Martha, because our intelligence community just came out and said in the last few days that the Kremlin, meaning Putin and the Russian government, are directing the attacks, the hacking on American accounts to influence our election. And WikiLeaks is part of that, as are other sites where the Russians hack information, we don't even know if it's accurate information, and then they put it out." — Hillary Clinton (presidential Debate, transcript via New York Times), Oct. 10, 2016

"But I notice, anytime anything wrong happens, they like to say the Russians are — she doesn't know if it's the Russians doing the hacking. Maybe there is no hacking. But they always blame Russia. And the reason they blame Russia because they think they're trying to tarnish me with Russia." — Donald Trump (presidential debate, transcript via New York Times), Oct. 10, 2016

As NBC's Mark Murray pointed out Monday morning, Mike Pence told Meet the Press in October that "there's more and more evidence" that Russia was behind the DNC hacks.

"You are very clearly quoting from WikiLeaks, and what's really important about WikiLeaks is that the Russian government has engaged in espionage against Americans. They have hacked American websites, American accounts of private people, of institutions, then they have given that information to WikiLeaks for the purpose of putting it on the Internet." — Hillary Clinton, to moderator Chris Wallace (presidential debate, transcript via CNN), Oct. 19, 2016

12. Chris Wallace presses Trump on the subject of Russian hacks

"WALLACE: And I would like to ask you this direct question. The top national security officials of this country do believe that Russia has been behind these hacks. Even if you don't know for sure whether they are, do you condemn any interference by Russia in the American election?

"TRUMP: By Russia or anybody else.

"WALLACE: You condemn their interference?

"TRUMP: Of course I condemn. Of course I — I don't know Putin. I have no idea." — Donald Trump and moderator Chris Wallace (presidential debate, transcript via CNN) Oct. 19, 2016)