Accessibility links
Jeff Sessions' Bid for Attorney General Might Not Go As Smoothly As Supporters Hope Senate Republicans want to speed the confirmation process for their colleague, Alabama's Jeff Sessions, to become attorney general. Democrats and civil rights groups are trying to pump the brakes. 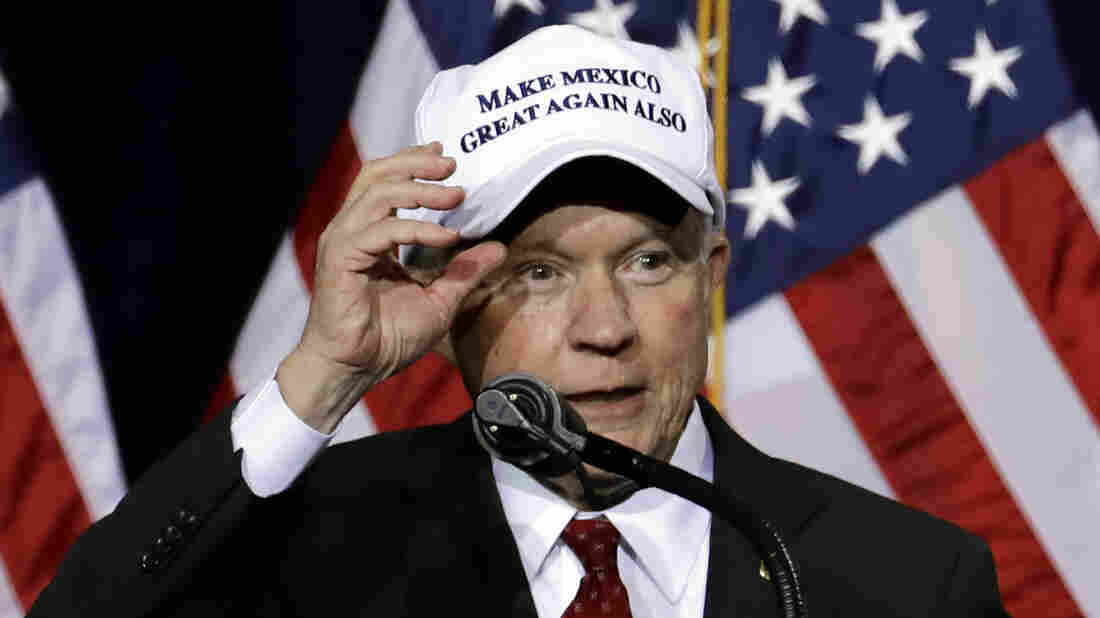 Democrats are warning that Sen. Jeff Sessions, R-Ala., Trump's pick for attorney general, is trying to "rebrand" after failing to be confirmed as a federal judge in 1986 because of racism allegations. Ross D. Franklin/AP hide caption 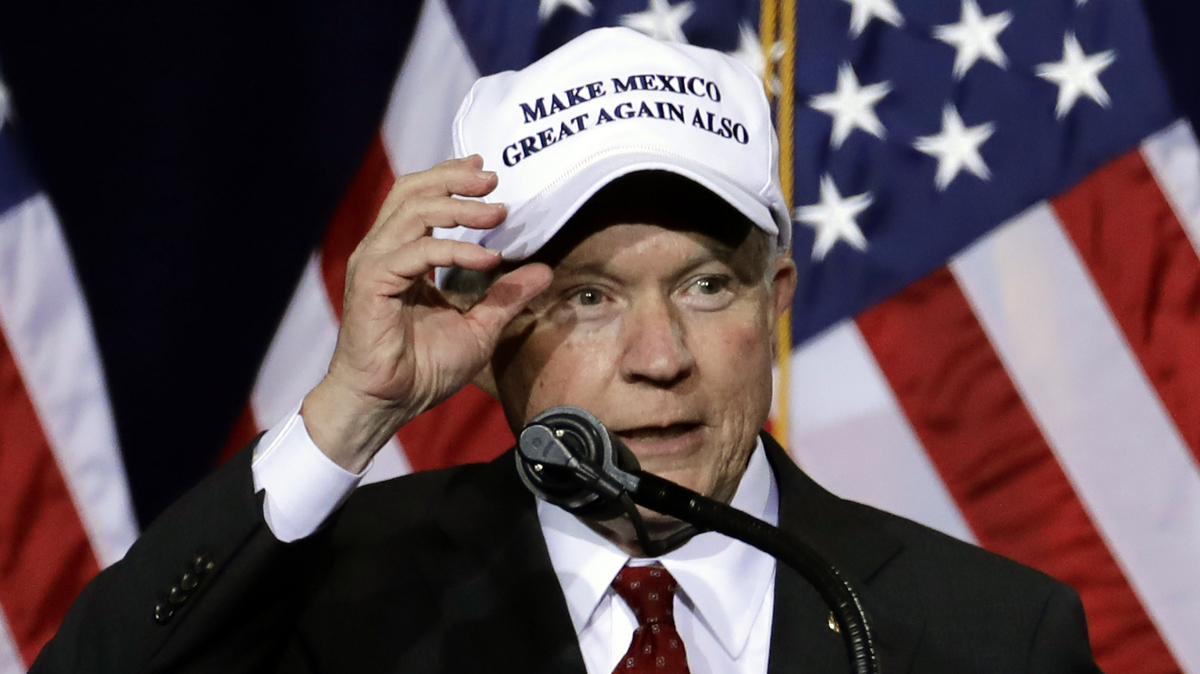 Democrats are warning that Sen. Jeff Sessions, R-Ala., Trump's pick for attorney general, is trying to "rebrand" after failing to be confirmed as a federal judge in 1986 because of racism allegations.

His Republican colleagues on Capitol Hill are hoping to advance Alabama Sen. Jeff Sessions' nomination to serve as U.S. attorney general at warp speed. Leaders at the Senate Judiciary Committee have already announced that confirmation hearings for the nation's next top law enforcement officer will begin Jan. 10, well before Donald Trump's inauguration.

But Democrats and civil rights advocates are signaling that the path for Sessions may not be as rapid, or as smooth, as Republicans would like.

Sessions, 69, returned his questionnaire to the committee amid little fanfare late last Friday evening. The former U.S. attorney and attorney general for the state of Alabama dutifully listed his employment record. But under a section asking for "any unsuccessful candidacies you have had for elective office or unsuccessful nominations for appointed offices," Sessions didn't mention his failed bid for a federal judge post.

Back in 1986, the Republican-led Judiciary Committee, the same panel that will consider his nomination next year, rejected him for a lifetime-tenured judgeship after lawyers testified he had a record of making racially insensitive statements. Sessions denied he was a racist, but he acknowledged he made a joke about thinking members of the KKK were all right — until he learned they smoked marijuana.

At the time of his nomination last month, Trump described Sessions in a written statement as "a world-class legal mind." The transition team has pointed to Sessions' support for a congressional award for civil rights hero Rosa Parks; his vote for Eric Holder Jr., the first black man to serve as attorney general; and his assistance in helping the Southern Poverty Law Center to sue the Ku Klux Klan into bankruptcy in 1981.

The Leadership Conference on Civil and Human Rights isn't so certain Sessions will enforce the civil rights laws on the books. The coalition of more than 200 human rights groups wrote lawmakers earlier this month to condemn the nominee as the wrong man for the job.

"Senator Sessions has a 30-year record of racial insensitivity, bias against immigrants, disregard for the rule of law, and hostility to the protection of civil rights that makes him unfit to serve as the Attorney General of the United States," they wrote.

Ten years after the Senate turned him away for a judgeship, Sessions was elected a U.S. senator — and he won re-election three more times. He went on to serve on the Judiciary Committee, where he vetted the records of two of President Obama's Supreme Court nominees, Sonia Sotomayor and Elena Kagan.

California Sen. Dianne Feinstein, who will become the panel's lead Democrat in January, sought to pump the brakes on the Sessions nomination Tuesday. She said lawmakers need more time to consider his record, which spans more than 150,000 pages. And she has yet to agree to limit the attorney general confirmation hearing to just two days.

Feinstein pointed out that Sessions still hasn't turned over complete information on which Republican candidates he has endorsed over the years. Nor, she wrote, has he turned over several speeches he gave on behalf of Trump on the campaign trail.

Is Hillary Clinton Trying To Question The Legitimacy Of Donald Trump Winning?

"These events, which happened only very recently, obviously are highly relevant to Senator Sessions' ability and intent to serve as an independent Attorney General," Feinstein wrote. "It also appears there are other missing speeches, such as a speech at an event called 'Restoration Weekend' from 2003 and a speech at a Federation for American Immigration Reform event in 2007."

At some points during the presidential race, Sessions appeared to throw his support behind Trump's proposal to ban Muslims from entering the country. In December 2015, at a Judiciary Committee meeting, Sessions spoke out to oppose an amendment sponsored by Democratic Sen. Patrick Leahy that sought to affirm that the U.S. should not bar immigrants from entering its borders based on their religion.

"With regard to immigration, it is our responsibility to protect the rights and well-being first of American citizens," Sessions said at the time. "Fundamentally, foreign nationals living in foreign countries do not have a constitutional right to enter the United States. ... The goal is to select immigrants for admission based on the benefits they provide to the society, based on skills, ages, values, philosophy, income, etc."

That resolution later passed with bipartisan support, 16 to 4.

And, one more thing about that questionnaire: Sessions was asked to provide the 10 most significant cases he "personally handled" as a lawyer. His list includes eight cases that were not listed in his 1986 judgeship materials, including four civil rights cases. But those newly listed cases date to the mid-1980s, something Democratic aides are casting as an effort by Sessions to belatedly "rebrand" himself as a civil rights advocate. They also question whether Sessions did much more than attach his name to legal filings, a somewhat pro forma step for U.S. attorneys.

Lawmakers have already collected several letters of support for Sessions, from former Republican Justice Department leaders who described him as a "person of unwavering dedication to the mission of the department — to assure that our country is governed by the fair and even-handed rule of law."

The Major City Chiefs Association, which represents police officials in big metropolitan areas, praised his "storied record of service to our nation and our justice system."

"I trust the other side will resist what some liberal interest groups are clearly hoping for — an attack on his character," Grassley said after Trump announced the choice. "The confirmation process of John Ashcroft to be attorney general turned into a reckless campaign that snowballed into an avalanche of innuendo, rumor and spin. That will not happen here."