Accessibility links
Poll shows sharp partisan divide on Obama's historical legacy. Nearly half of all Americans think Obama will go down in history as an "outstanding" or "above-average" president. But Democrats are much more likely to say so than Republicans.

President Obama's legacy will take some time to determine, but on his way out, it's clear judgments about him have been split along party lines. Chip Somodevilla/Getty Images hide caption

President Obama's legacy will take some time to determine, but on his way out, it's clear judgments about him have been split along party lines.

As President Obama prepares to leave office, 45 percent of Americans think he'll be remembered as an outstanding or above-average president, according to a new survey by the Pew Research Center.

That's the highest average for an outgoing president since Ronald Reagan. But pollsters found a deep partisan divide, with Republicans expressing much less support for Obama's historical record than Democrats. 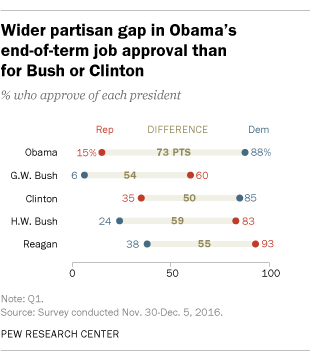 Obama's job approval rating has climbed to its highest level since just after his re-election, with 58 percent of Americans saying they approve of his performance. An even larger share — 64 percent — say they have a favorable impression of Obama personally. But the president still falls short of the first lady. Michelle Obama is viewed favorably by 72 percent.

The president's place in history is anchored by passage of the Affordable Care Act, which 35 percent of survey respondents cite as his most memorable accomplishment. That's a tenuous legacy, though, as President-elect Donald Trump and the Republican Congress have vowed to repeal the law, which extends health insurance to more than 20 million Americans.

Historical assessments of a president's record often change with the passage of time. But at this point, Obama is viewed as outstanding or above-average by more Americans (45 percent) than Bill Clinton (42 percent), George H.W. Bush (36 percent) and George W. Bush (11 percent) were at the end of their time in office. Reagan had the highest rating among modern presidents — he was viewed as outstanding or above-average by 59 percent. 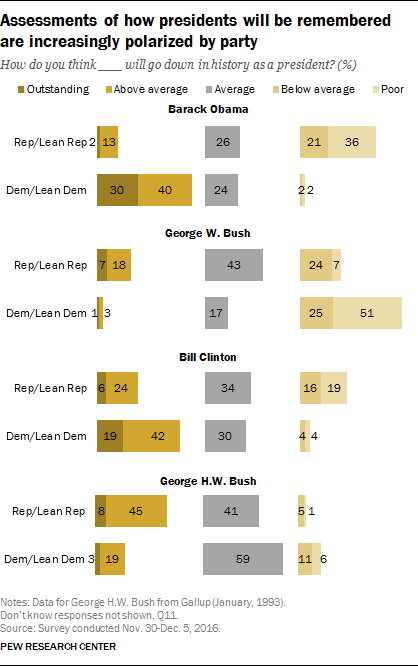 In a sign of growing polarization, there's a much wider gulf today between the way Democrats and Republicans rate Obama than there was for past presidents — 71 percent of Democrats or Democratic-leaners say Obama will be remembered as outstanding or above-average. Only 15 percent of Republicans agree.

Bill Clinton's overall rating when he left office was similar, but the partisan gap was less pronounced. Republicans were somewhat more generous in their assessment of Clinton's place in history than they are of Obama's, while Democrats were slightly less so.