Accessibility links
7 Questions We Would Have Asked Donald Trump At His Press Conference On His Businesses The president-elect promised a news conference on how he'd try to avoid potential conflicts of interest with his businesses (and more) as president. He canceled. Here's what we'd like answered. 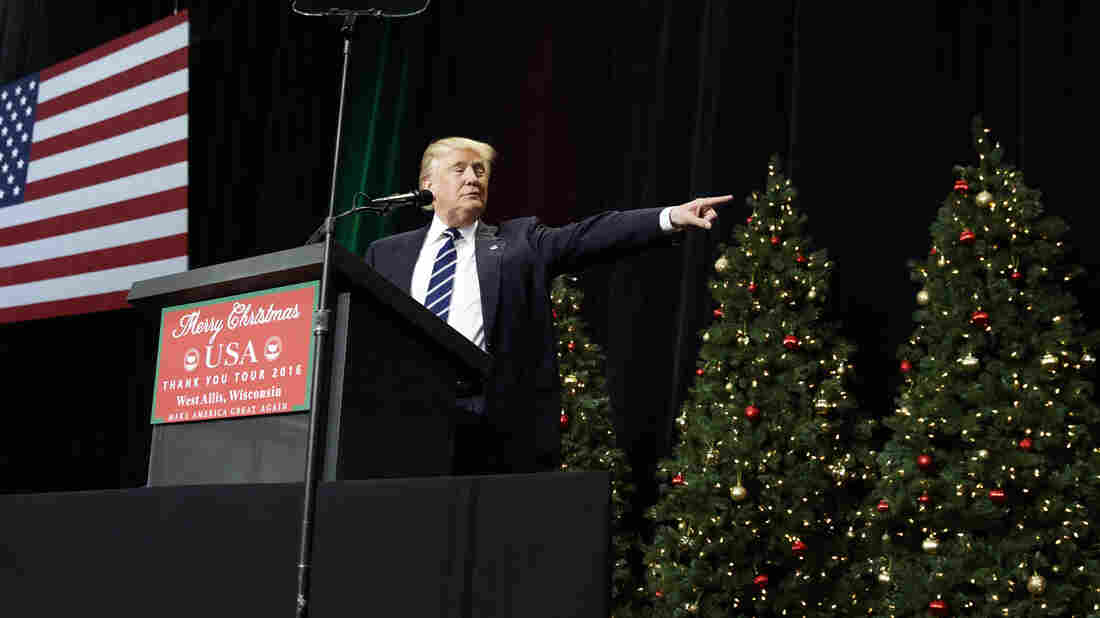 President-elect Trump at a rally in Wisconsin Tuesday. Trump is doing four rallies in five days, and he canceled a press conference originally scheduled to talk about his potential business conflict. Evan Vucci/AP hide caption 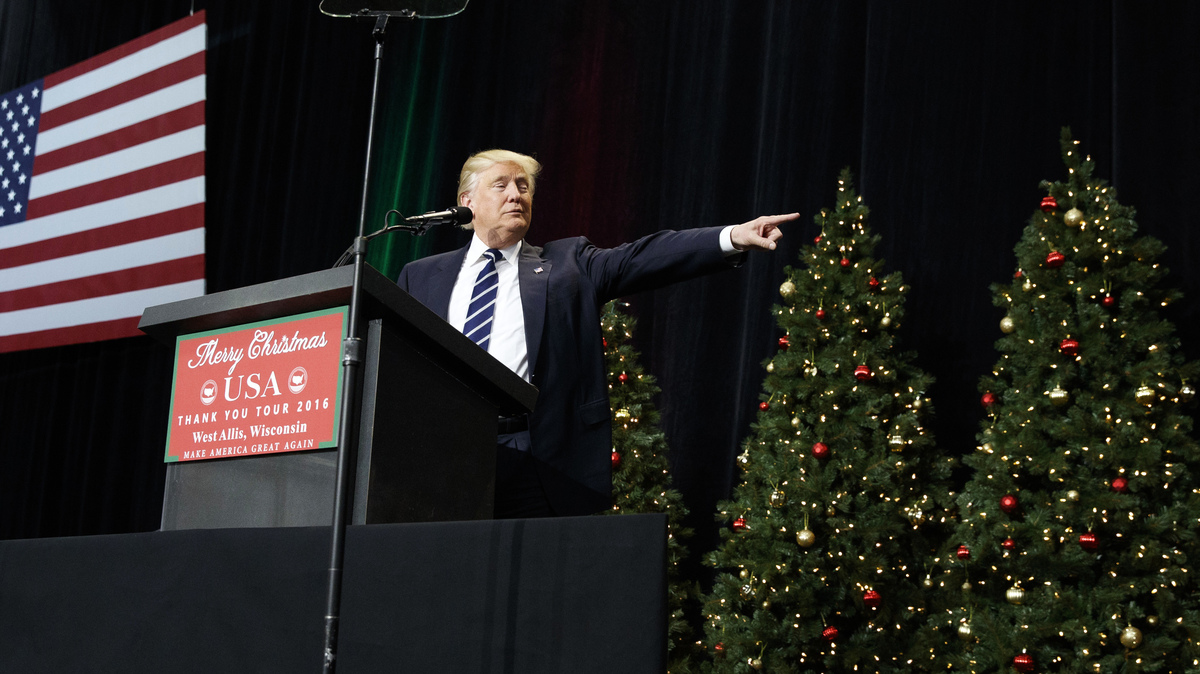 President-elect Trump at a rally in Wisconsin Tuesday. Trump is doing four rallies in five days, and he canceled a press conference originally scheduled to talk about his potential business conflict.

President-elect Donald Trump promised a press conference Thursday to clarify the role he would have with his international business entanglements after he becomes president.

The transition team said Monday that Trump is delaying his "announcement" until January. Later that night, Trump took to his favorite medium to go around the filter — Twitter — and made some news about his plans:

Even though I am not mandated by law to do so, I will be leaving my busineses before January 20th so that I can focus full time on the......

Presidency. Two of my children, Don and Eric, plus executives, will manage them. No new deals will be done during my term(s) in office.

But we have questions related to his businesses — and otherwise. Here's what six of our top reporters and correspondents, who cover business, politics and the White House, would have asked — and would welcome answers to.

1. Why did your daughter sit in on a meeting with the Japanese prime minister, and did she discuss any business during the meeting?

Context: This happened at a time when Ivanka Trump was closing a deal with a Japanese clothing company that has the Japanese government as a shareholder. The Trump transition team didn't release any pictures of the meeting, but they appeared later on social media in Japan.

2. Last month you had a phone call with the Argentine president. Is there any truth to the report that you spoke about stalled permits for a construction project you're building in Buenos Aires? What is the status of the project now?

Context: There was a report a few days after the call that the project, which was stalled for a while, had restarted. There was also the initial report from a respected Argentine journalist that Trump discussed the project with Argentine President Mauricio Macri, whose office denied the report.

Context: All three children have been involved in running the Trump Organization, and all three have played a role in the Trump transition. In fact, all three were photographed in a meeting of tech leaders Wednesday. While ethics watchdogs say nothing short of liquidation would resolve the potential for conflicts of interest, I'm trying to understand what kind of firewall Trump envisions erecting within his family.

4. Why are you skeptical of the consensus of all 17 U.S. intelligence agencies, that Russia interfered with the 2016 election process? You have repeatedly said that U.S. intelligence "has no idea" who hacked U.S. institutions. You have access to the classified evidence that supports the intelligence assessment. Do you possess evidence to the contrary?

Context: In a joint statement, released Oct. 7, the 17 agencies said (boldface is ours):

"The U.S. Intelligence Community (USIC) is confident that the Russian Government directed the recent compromises of e-mails from US persons and institutions, including from US political organizations. The recent disclosures of alleged hacked e-mails on sites like DCLeaks.com and WikiLeaks and by the Guccifer 2.0 online persona are consistent with the methods and motivations of Russian-directed efforts. These thefts and disclosures are intended to interfere with the US election process. Such activity is not new to Moscow—the Russians have used similar tactics and techniques across Europe and Eurasia, for example, to influence public opinion there. We believe, based on the scope and sensitivity of these efforts, that only Russia's senior-most officials could have authorized these activities."

A leaked CIA analysis concluded that it was done in an effort to hurt Hillary Clinton and try to get Donald Trump elected. An NBC News report went further, saying the CIA had "high confidence" that Russian President Vladimir Putin "became personally involved in the covert Russian campaign to interfere in the U.S. presidential election," stemming from a "vendetta" against Clinton because of comments she made in 2011 questioning the legitimacy of the Russian elections.

5. The Carrier company is using the $16.5 million investment in the Indiana plant to automate it, which will lead to more layoffs in the future. Do you have a plan to stop the job-killing effects of automation?

"We're going to make a $16 million investment in that factory in Indianapolis to automate to drive the cost down so that we can continue to be competitive. Now, is it as cheap as moving to Mexico with lower cost of labor? No. But we will make that plant competitive just because we'll make the capital investments there. What that ultimately means is there will be fewer jobs."

"Trump's deal will keep 730 union, production line jobs as well as 70 salaried positions in Indianapolis in exchange for $7 million in tax incentives over the next 10 years."

6. Your former campaign manager, Corey Lewandowski, said recently the problem with the media is that they took the things you said too literally. Do you want the American people to take what you say and tweet literally? How can the American people judge whether you are being truthful if your own aides say you shouldn't necessarily be taken literally?

Context: Earlier this month, during a panel discussion at the Harvard Institute of Politics, the former Trump campaign manager said, "This is the problem with the media — you guys took everything Donald Trump said so literally. And the problem with that is the American people didn't. They understood that sometimes when you have a conversation with people, you're going to say something, and maybe you don't have all the facts to back that up, but that's how the American people live."

Trump has repeatedly said and tweeted things that are simply not true. He also made promises on the campaign trail that he has backed away from, like saying Hillary Clinton would be locked up if he were president or that he would call for a temporary ban of Muslims coming into the United States. Lewandowski, who has been seen coming and going from Trump Tower during the transition, implied it was a mistake for journalists to focus on these things. The president-elect's view on this could be revealing.

7. Mr. President-elect, you have said repeatedly in speeches during your thank-you tour that you will bring the U.S. together — that we're one country, and we need to be united. But at those same speeches, talk of unity is combined with statements that criticize, even mock those who opposed you. How does that serve the unity you say needs to come about? And can you please list some specific examples of things you will do to help that unity take place?

Context: I'd ask this question for several reasons. His call for unity is absolutely at odds with much of his post-election rhetoric so far. While it's true that, at times, Trump seems to lack ideology — many voters told me this year that they see him as neither a Republican nor a Democrat — he, so far, has done very little to reassure or reach out to voters and elected officials who opposed him.

He has boasted of his victory at rallies, while reliving his margins state by state. He has claimed falsely to have won one of the biggest Electoral College landslides ever. And he has said he only lost the popular vote because of millions of people voting illegally for his opponent. He has also named a very conservative Cabinet with an unprecedented number of billionaires and millionaires.

The closest he has come to reaching out would be some of the meetings he has held at Trump Tower, including with Mitt Romney, who was eventually rejected as a secretary of state nominee, and former Vice President Al Gore, who told reporters he had an "extremely interesting" discussion with Trump on climate change. Just days after the Gore meeting, Trump, who has called climate change a "hoax," named Oklahoma Attorney General Scott Pruitt to head the Environmental Protection Agency. Pruitt is a climate-change skeptic who has, in the past, sued the EPA over its efforts to reduce greenhouse gas emissions from power plants.