Accessibility links
President Obama Promises Response To Russian Hacking In NPR Interview President Obama tells NPR in a new interview that the U.S. response to Russia's attempted interference in the 2016 election may be both "explicit" and not.

President Obama says the United States will respond to Russian cyberattacks that the intelligence community has concluded were part of an effort to influence the 2016 presidential election.

In an interview with NPR's Steve Inskeep that is airing Friday on Morning Edition, Obama said, "I think there is no doubt that when any foreign government tries to impact the integrity of our elections ... we need to take action. And we will — at a time and place of our own choosing. Some of it may be explicit and publicized; some of it may not be."

Obama tells NPR "we will" respond to Russian hacking

U.S. intelligence officials have concluded that hackers working for Russia hacked into the Democratic National Committee's computer network, as well as the private email of John Podesta, a top adviser to Democratic presidential nominee Hillary Clinton.

Russia responded Friday morning. Dmitri S. Peskov, the Kremlin's spokesman, said the U.S. needs to show some proof or quit talking. "It is necessary to either stop talking about it, or finally produce some evidence," he told Interfax, per the New York Times. "Otherwise, it all begins to look quite unseemly."

The Russian Hacking Controversy: What We Do And Don't Know

With the question of Russia's ultimate motivation for the hack becoming increasingly divisive, Obama was careful to not endorse a CIA assessment, reported by NPR and other news outlets, that asserts that Russia's goal was to elect Trump.

"There are still a whole range of assessments taking place among the agencies," Obama told NPR, referring to an order he has given the U.S. intelligence community to conduct a full review of the cyberattacks before Inauguration Day. "And so when I receive a final report, you know, we'll be able to, I think, give us a comprehensive and best guess as to those motivations. But that does not in any way, I think, detract from the basic point that everyone during the election perceived accurately — that in fact what the Russian hack had done was create more problems for the Clinton campaign than it had for the Trump campaign.

"There's no doubt that it contributed to an atmosphere in which the only focus for weeks at a time, months at a time were Hillary's emails, the Clinton Foundation, political gossip surrounding the DNC."

In fact, email had been a major focus since before Clinton formally entered the presidential race, owing to revelations first reported by the New York Times that she used a private email server during her tenure leading the State Department. Updates about the FBI's investigation of the server dripped out at intervals throughout the entire campaign.

The State Department also released Clinton emails at semi-regular intervals throughout the campaign, as did the conservative group Judicial Watch, which obtained them through a Freedom of Information Act lawsuit. 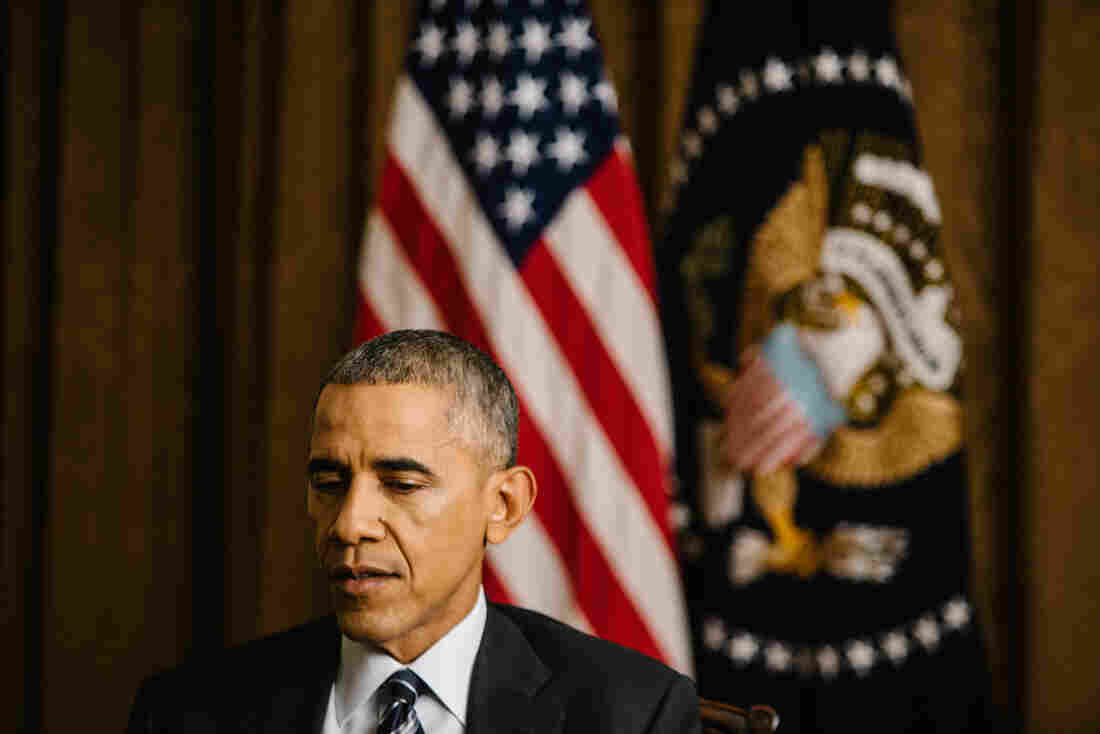 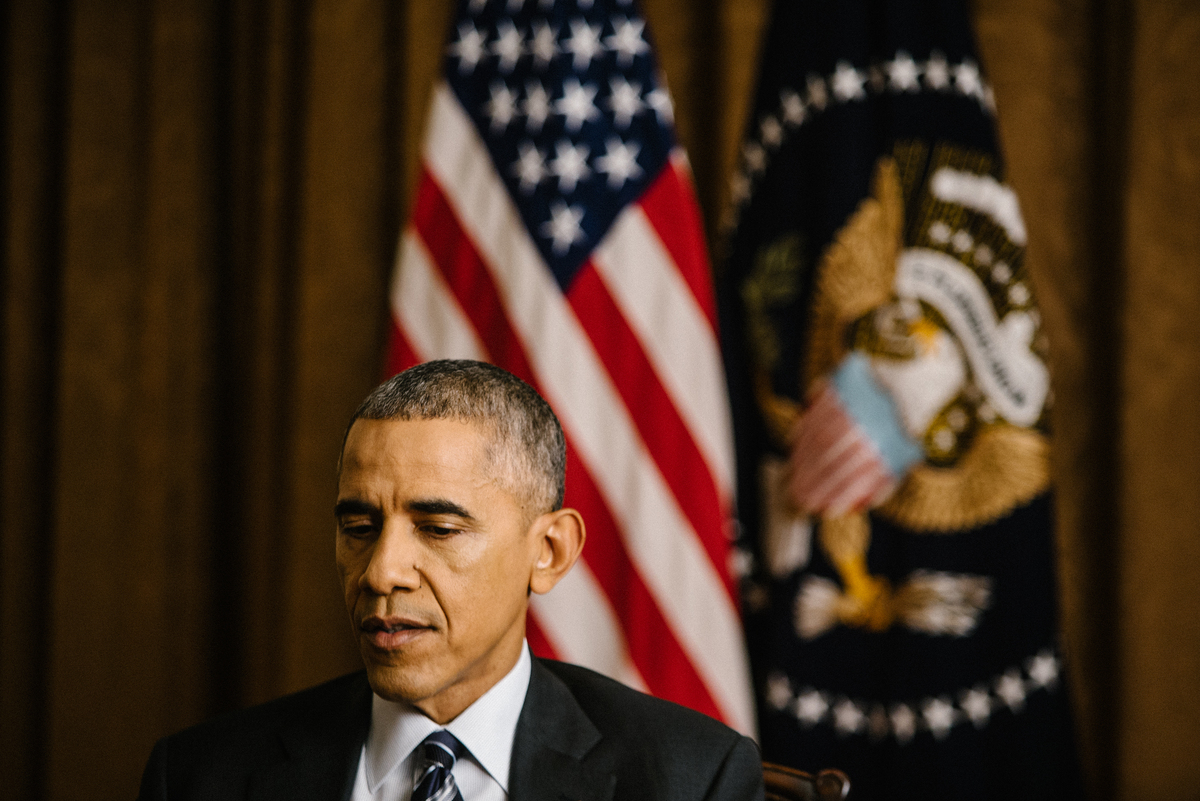 NPR's Steve Inskeep interviews President Obama in the Cabinet Room of the White House on Thursday.

Obama didn't pin the blame for Clinton's loss on the leaked information, saying, "Elections can always turn out differently. You never know which factors are going to make a difference. But I have no doubt that it had some impact, just based on the coverage."

Obama said his goal is for a definitive White House report on the matter to be issued before President-elect Donald Trump takes office on Jan. 20. He was also careful to say that while the Russian hacks benefited Trump, he is not suggesting Trump's campaign helped coordinate the attacks or played any role in them, other than to exploit them for political advantage. "They understood what everybody else understood, which was that this was not good for Hillary Clinton's campaign," the president said.

Obama acknowledged that every "big power" spies and collects intelligence on each other, but, he said, "There's a difference between that and the kind of malicious cyberattacks that steal trade secrets or engage in industrial espionage, something that we've seen the Chinese do. And there is a difference between that and activating intelligence in a way that's designed to influence elections."

Obama discussed cybersecurity with Vladimir Putin during a 90-minute meeting on the sidelines of the G-20 summit held in China in early September. The president characterized the meeting at the time as "candid, blunt, businesslike."

While Obama is threatening to retaliate against Russia, he has only about five weeks left in the Oval Office. Trump has dismissed — in fact, mocked — intelligence assessments tying the DNC and Podesta hacks to Russia, and he campaigned on improving the U.S. relationship with the country.

In his interview with NPR, Obama appeared mystified by that stance.

"The irony of all this, of course, is that for most of my presidency, there's been a pretty sizable wing of the Republican Party that has consistently criticized me for not being tough enough on Russia," he said. "Some of those folks during the campaign endorsed Donald Trump, despite the fact that a central tenet of his foreign policy was we shouldn't be so tough on Russia. And that kind of inconsistency I think makes it appear, at least, that their particular position on Russia on any given day depends on what's politically expedient."

The president cited a recent Economist-YouGov poll that found Republican voters view Putin much more favorably now than they did before the 2016 presidential election.

"This is somebody, the former head of the KGB, who is responsible for crushing democracy in Russia, muzzling the press, throwing political dissidents in jail, countering American efforts to expand freedom at every turn; is currently making decisions that's leading to a slaughter in Syria. And a big chunk of the Republican Party, which prided itself during the Reagan era and for decades that followed as being the bulwark against Russian influence, now suddenly is embracing him."

NPR reached out to the Trump transition team for comment but has not received a response.