Accessibility links
At TubaChristmas, An Underdog Instrument Shines The event now gathers musicians across the U.S. and in several countries abroad. It all started in December 1974, when a tuba enthusiast organized a concert of about 300 tubas in Rockefeller Plaza. 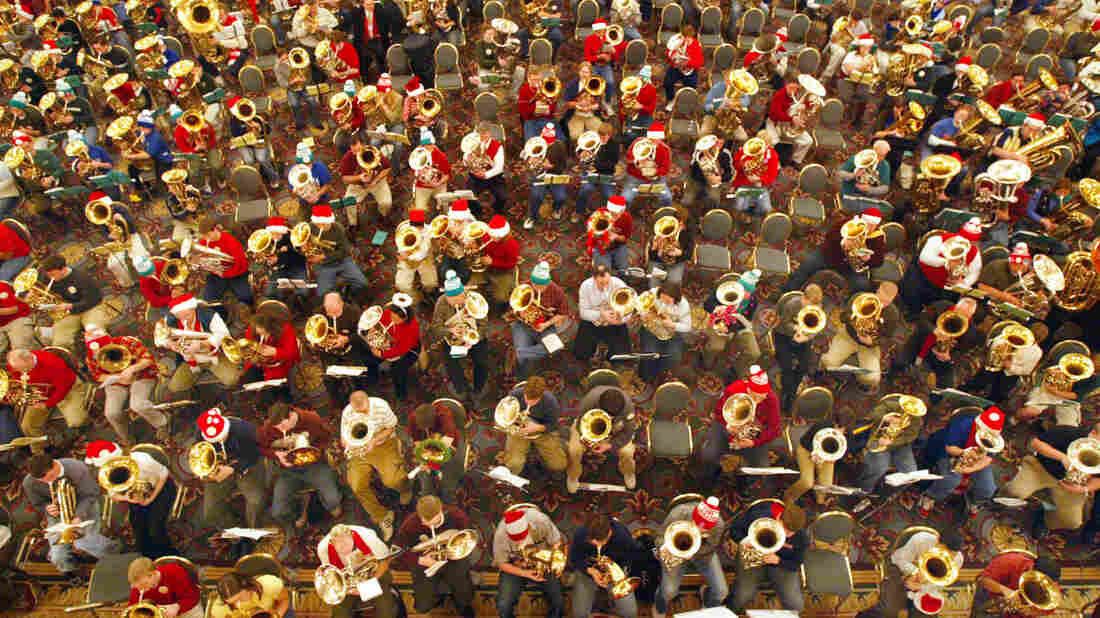 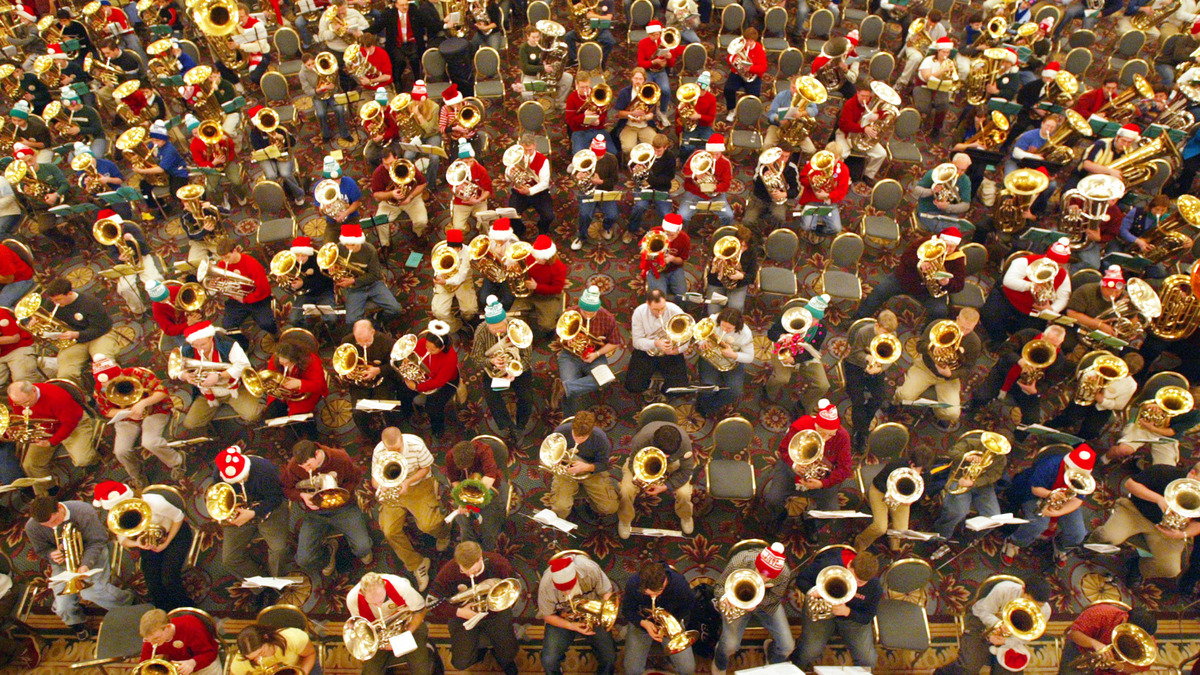 Over 400 musicians participated in this 2003 TubaChristmas event in Chicago.

In hundreds of cities across the U.S. –- and a few abroad, too –- tuba and euphonium players are gathering for an annual tradition: TubaChristmas. The mandate of the event is simple: Gather a group of tuba and euphonium players and play holiday songs. Its scope, however, is large: These gatherings can include hundreds of tuba players, and this weekend alone, there are more than 60 TubaChristmas events from Hattiesburg, Miss, to Las Cruces, N.M. to San Ramón, Costa Rica.

Chris Quade organized the TubaChristmas event at the John F. Kennedy Center for the Performing Arts in Washington, D.C. this week. He is a tubist (yes, tubist) with the United States Air Force Band. He was also a student of the late Harvey Phillips, the founder of TubaChristmas. Quade says the Tuba celebration's proximity to Christmas is actually just mere coincidence — Phillips came up with the event to honor his teacher, whose birthday happened to be on Christmas Day.

The first TubaChristmas took place at a highly coveted venue — New York City's Rockefeller Plaza. Quade says Phillips called the Rockefeller Center and asked to rent their stage. When they asked what kind of ensemble he was planning to bring, he told them he didn't have an ensemble, per se --just a group of about 300 tuba players. "There was a pregnant silence on the other end of the phone," Quade says.

But Phillips, who had amassed a formidable collection of contacts as a freelance player in New York City, told the Rockefeller Center folks that if they felt hesitant, they could feel free to contact some of his friends: Leonard Bernstein, Morton Gould, Igor Stravinsky and Leopold Stokowski. His technique worked. "Half an hour later, they called him and said, "Mr. Phillips, you can have anything you want," Quade says.

Quade says the tuba really needed an ambassador like Phillips. First, it's a relatively young instrument: The brass tuba was invented in the 1830s. And second, some folks think the only use of the tuba is to be loud. Phillips, Quade says, was personally offended by those who underestimated his instrument.

"He rightly knew that it was a beautiful instrument capable of the most melodic playing you'd ever want," he says. Plus, Quade adds, Phillips could really play. "He's the best player we've ever had," he says.

Quade recalls a decree from his beloved teacher: "Do not let a single composer get through his or her career without being asked, 'Write something for the tuba.'"

It's too bad no one ever got to ask Mozart, though. "The old joke," Quade says, "is that Mozart only wrote four horn concertos because the tuba hadn't been invented at the time."