Accessibility links
They Told Us So: Fantagraphics Turns 40 Fantagraphics is the publisher that brought literary respectability to comics. Their mammoth 40th anniversary volume, We Told You So, tends towards self-congratulation — but deservedly so. 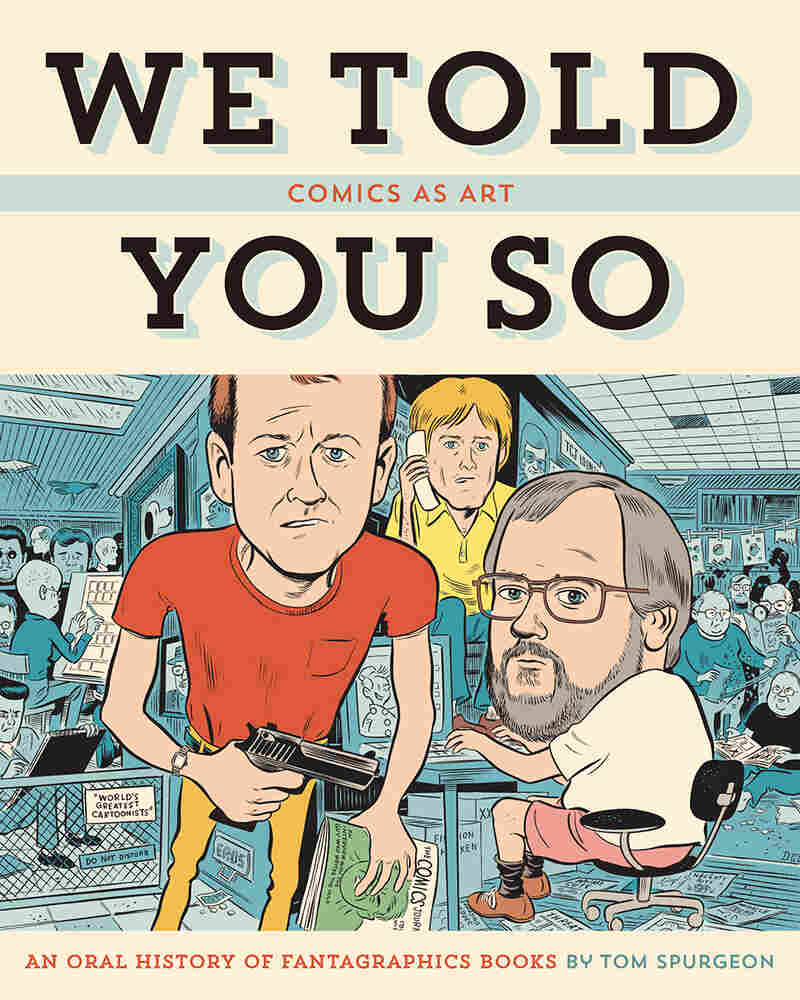 We Told You So

by Tom Spurgeon and Michael Dean

Arrogance — embattled, victorious and punch-drunk on its own steamy brew — positively billows around Fantagraphics' 40th anniversary tome. There is, of course, the title. You can't get much more self-congratulatory than We Told You So, unless maybe you subtitle it Neener Neener.

But the actual subtitle, Comics as Art, effectively points out that this company's self-congratulation is well earned. It's hard to overstate the revolutionary transformation Fantagraphics has helped bring to comics over its four decades. When Gary Groth, Mike Catron and Kim Thompson started the company in the '70s (Groth and Catron were the co-founders, with Thompson signing on shortly after), the comics world was defined by mass-produced superhero books, puerile newspaper strips and the bawdy fringe of the post-'60s underground. Such notions as creating comics that shunned the lowest common denominator, selling comics in book form, or producing a comics magazine that would emulate Esquire and The Village Voice all seemed far-fetched at best.

Today, all these ideas seem perfectly reasonable and, yes, the genre wins respect as art. Adult readers who delved into Ta-Nehisi Coates' Between the World and Me last year also read his take on Black Panther with artist Brian Stelfreeze. When the producers of the PBS show Art21 were choosing four figures to represent the Chicago scene, they included onetime Fantagraphics artist Chris Ware. Many other past and current Fantagraphics names have seen their work purchased by art collectors and libraries. The company's vast roster includes or has included Peter Bagge, Ivan Brunetti, Charles Burns, Dan Clowes, R. Crumb, Jaime and Gilbert Hernandez, Tony Millionaire, Johnny Ryan, Joe Sacco, Richard Sala and Art Spiegelman. Then there are the excellent collections of work for posterity — from Young Romance to The Complete Wimmen's Comix — and the Esquire-emulating Comics Journal.

... this is a well-earned victory lap of a book. And yet that sense of self-satisfaction, while inspiring, does get in the way sometimes.

So yes, this is a well-earned victory lap of a book. And yet that sense of self-satisfaction, while inspiring, does get in the way sometimes. A comparison with a similar volume put out last year by Montreal-based Drawn & Quarterly, Fantagraphics' main competitor, is instructive: D&Q's book mixes interviews, essays by and about its artists, and excerpts of the work it's published over the years. Not so in We Told You So. Its 696 pages are devoted almost exclusively to a series of interviews relating a minutely — very minutely — detailed history. We learn who dumped beer on Groth's head one time and how many hours art director Dale Crain worked. We learn who came to all the parties and who nerved themselves to jump from the roof into the pool. A huge number of the company's creators share stories, but their reminiscences aren't as varied as, for instance, the artist essays in D&Q's book. A section of clips from The Comics Journal could have been a lot longer. And though there's a lot of work on display, it's mostly cover images. When full comics do appear, they're ... about Fantagraphics.

Along the way, though, are crucial chunks of history: Michael Fleisher's 1980 lawsuit against the company, Groth and Harlan Ellison; Jack Kirby's fight with Marvel over the rights to his art; Fantagraphics' desperate pleas to readers to help keep it afloat in 2003. And above all, we learn what it was like to identify, package and sell a genre that was still scrounging for an audience. Groth describes trying to explain the new comics to literary critic John Simon in 1976:

"The problem was, I couldn't point him to any single comic or body of work that reflected the kind of literary values we were championing," he says. "To a literary type at that time, the underground comics ... were rarified. If John Updike looked at S. Clay Wilson, I don't think he'd necessarily see the literary potential of comics."

Today, not only Wilson but his chaotic heirs are appreciated as creators who go beyond the bounds of what's "literary." It took a certain kind of attitude to win that recognition from the culture watchdogs. This book isn't just a description of that attitude, it's the embodiment of it. And that's a very necessary kind of arrogance.