Accessibility links
California Gets Ready To Defy Trump's Washington In the Obama administration, Republican-dominated states such as Texas often sought to block the president's agenda. In the Trump era, California may play that same role. 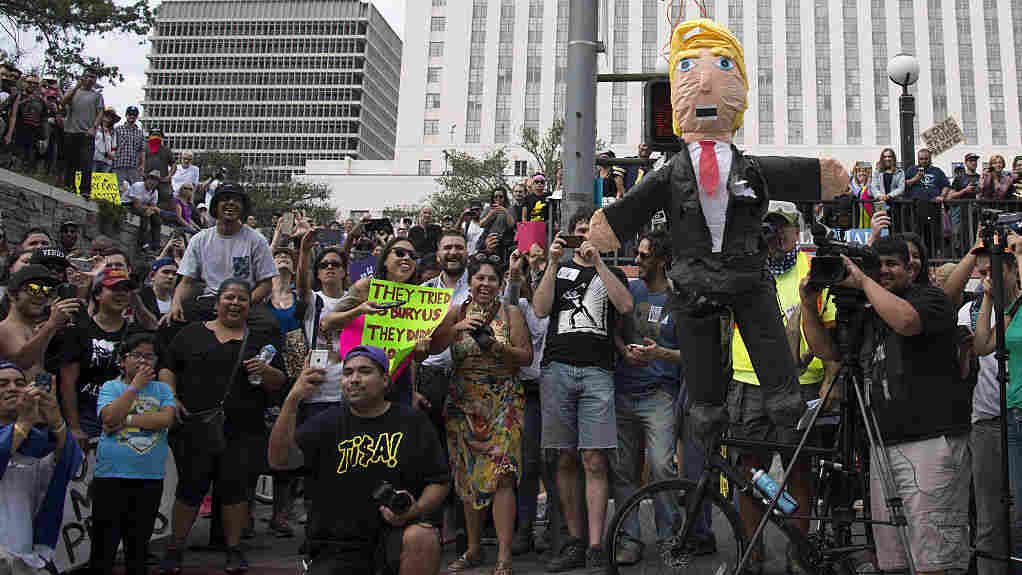 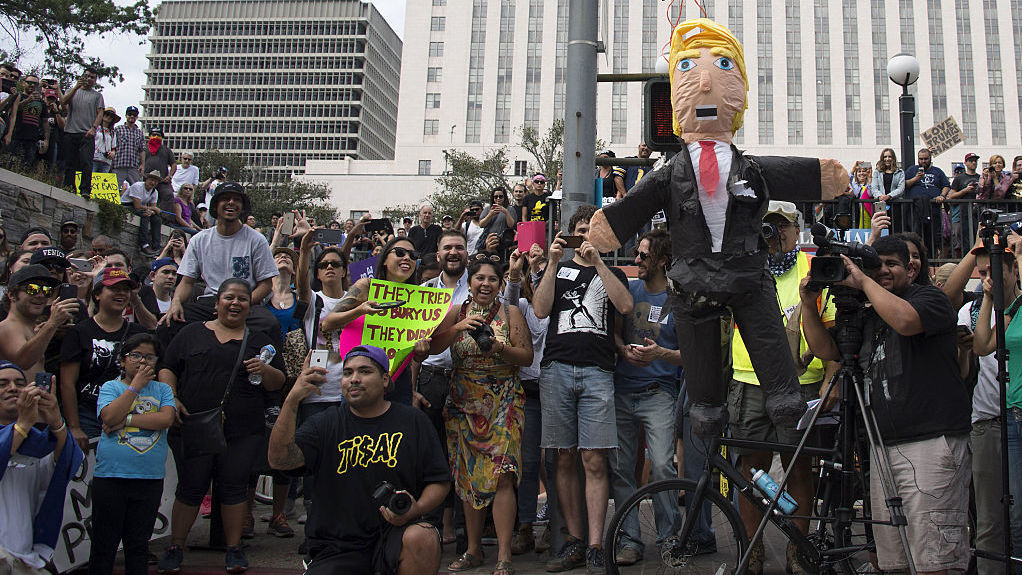 A protest against President-elect Donald Trump in Los Angeles last month. Democrat Hillary Clinton drew 61 percent of the vote versus Trump's 31 percent in the country's most populous state.

With Donald Trump set to become president next month and Republicans in control of both chambers of Congress, California's Democrats believe their state should take the lead in opposing the new administration's priorities.

And they have no interest in calls for national unity.

"We must be defiant whenever justice, fairness, and righteousness require," State Assembly Speaker Anthony Rendon recently told lawmakers. "Californians do not need healing. We need to fight."

Rendon's message was greeted with rousing applause from Democrats, who command super-majorities in both chambers of the legislature.

In the Obama administration, Republican-dominated states such as Texas often sought to block the president's agenda. In the Trump era, California may play that same role.

Californians voted overwhelming for Hillary Clinton last month and Democrats believe many of their policies, such as the state's lenient stance toward immigrants in the country illegally, its strict anti-guns laws and its recent legalization of recreational marijuana, could be threatened by the Trump administration.

Trump has called climate change, one the issues most important to Gov. Jerry Brown, a "hoax."

"The science is clear and the consequences are dire," Brown recently told reporters. "So, based on those two facts, I think Washington will come around. But to the extent that they don't, we're going to be pushing as hard as we can from California."

Still, Brown intends to take a more wait-and-see approach on other issues compared to the hard-charging Democrats in the legislature.

There are several ways the state may challenge Trump and congressional Republicans. It may simply choose not to not enforce some federal laws it disagrees with and enact stronger state laws around environmental and consumer regulations. The state is also likely to aggressively file lawsuits against the federal government.

To that end, Brown's pick to be California's next attorney general, Congressman Xavier Becerra will play a high-profile role. Becerra said the state isn't looking to pick fights but won't be afraid to go to court either.

"My obligation is to protect my state, to promote the interests of my state," said Becerra.

It may sound unusual for a liberal state like California to resort to an appeal to states' rights. For the past eight years, conservative states have argued for their autonomy with respect to the federal government.

But states are opportunistic about their use of states' rights arguments and tend to employ them when their party doesn't control Washington, says Carlton Larson, a law professor at the University of California, Davis. Still, Larson says California may want to be careful about how much it uses that argument.

"If we were to push back very, very heavily against federal law, there's a real danger," that environmental and civil rights laws that depend on a broad reading of federal law could be endangered, said Larson.

Democrats have already introduced one bill to better train defense attorneys on immigration law and another to fund legal representation for people facing deportation. Both are "urgency measures" meaning they would take effect immediately if they muster a two-thirds vote. The programs are expected to cost millions of dollars.

The Trump administration has plenty of tools to try to force California to comply. For instance, the state received nearly $96 billion in federal funds this year, according to the California Department of Finance.

That sum didn't faze Governor Brown when he recently vowed to continue the state's aggressive approach to combating climate change.

"We have the laws, we have the tools of enforcement, and we have the political will," Brown said. "And we will set the stage, we'll set the example and whatever Washington thinks they're doing, California is the future."

That's a sentiment most California Democrats believe as they get ready for the next four years.