Accessibility links
Women's March On Washington Aims To Be More Than Protest "If you're just protesting, and it just stops there," Georgetown history professor Michael Kazin noted, "you're not going to get anything done." 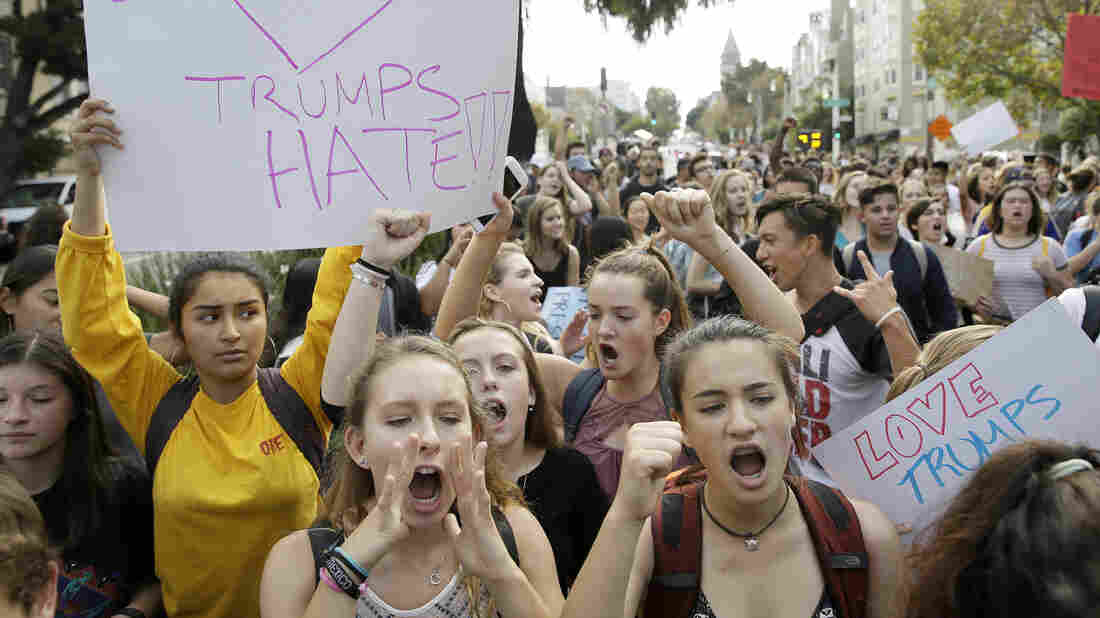 San Francisco high school students protest in opposition to Donald Trump's presidential victory. Protests like it have been springing up all over the country, and a women's protest is planned for Jan. 21. Eric Risberg/AP hide caption 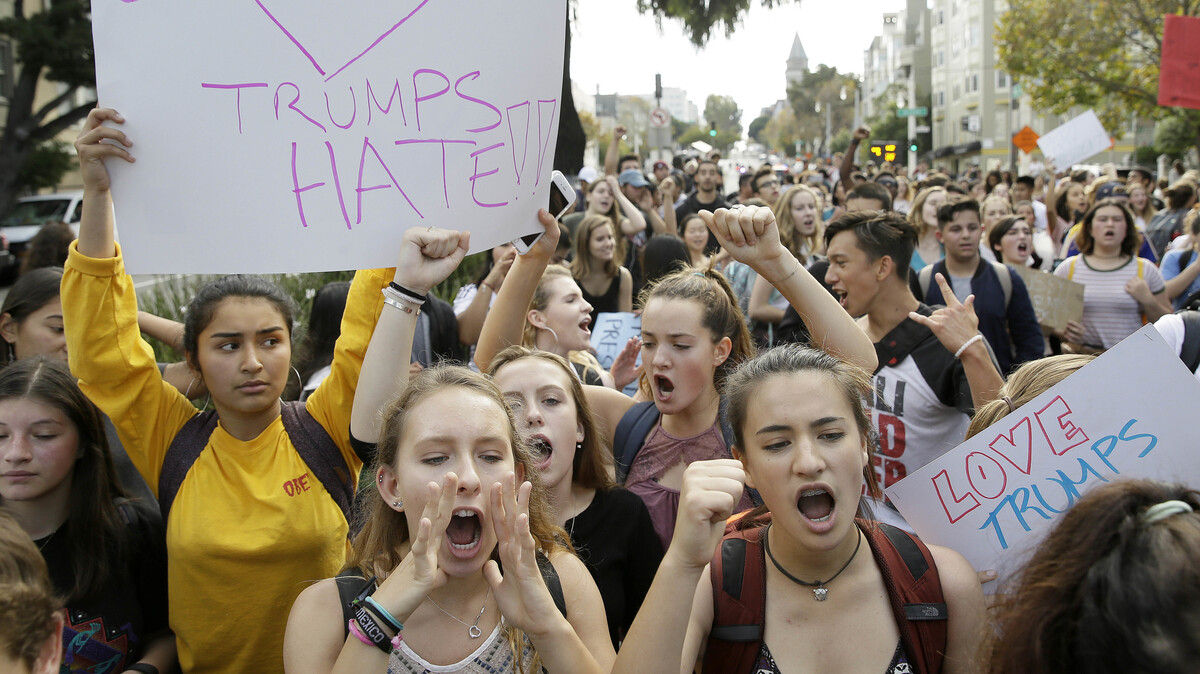 San Francisco high school students protest in opposition to Donald Trump's presidential victory. Protests like it have been springing up all over the country, and a women's protest is planned for Jan. 21.

The day after President-elect Donald Trump's inauguration, Jan. 20, 2017, a march is slated to take place on the National Mall.

It's being called the Women's March on Washington. (It was being referred to, somewhat controversially, as the "Million Women March" before it was re-branded.) At this point, thousands of women and allies plan to rally here for the Women's March on Washington. The march aims to "send a bold message to our new administration on their first day in office, and to the world that women's rights are human rights," according to the event's official website.

"We want to ensure that this country knows women are not happy," co-founder Tamika Mallory said. "And when we get angry, change happens. We make things happen."

Catalyzed by a polarizing presidential race, the march aims to be a message to the new administration that there's a coalition planning to press the issue of women's rights in potentially high-profile ways over the next four years.

"This effort is not anti-Trump," Mallory said. "This is pro-women. This is a continuation of a struggle women have been dealing with for a very long time. In this moment, we are connecting and being as loud as possible."

Trump created firestorms when it came to women's issues during the campaign. Upset with Fox News anchor Megyn Kelly bringing up in a debate his past crude remarks about women (calling some "pigs," for example), he responded that she had "blood coming out of her — wherever." Trump was also caught on tape bragging about grabbing women by the genitals. "[W]hen you're a star, they let you do it. You can do anything," Trump said in the leaked 2005 video. Trump has a long history of making sexist or offensive remarks, and his candidacy happened to take place while running against a candidate who would have been the first female president.

What started as a cross-country collaboration among seven women in the aftermath of Election Day gained traction online and is now a network of 50-plus events in multiple countries.

Historical significance is embedded in the event's name: To march in Washington evokes the legacies of powerful public demonstrations in American history, such as Martin Luther King Jr.'s March on Washington for Jobs and Freedom, the Moratorium March to End the War in Vietnam, the Million Man March to highlight the collective power of the African-American community, and the 2004 March for Women's Lives as a demonstration for reproductive and women's rights.

Organizers are hoping to create a social movement, but Marcia Chatelain, a faculty fellow at Georgetown University's Center for Social Justice, said doing that depends on whether the Women's March's momentum can be sustained long after the march itself.

"One of the goals of any type of march or any type of visible sign of solidarity is to get inspired, to inspire people to do more," Chatelain said. "And the question is, at the march, what kind of organizational structures or movements will also be present to help people know how to channel their energy for the next day and for the long haul?"

The Richest Administration In History Just Got Richer

Organizers and activists can use the march to proffer alternative ways to create change in their communities and contribute to a greater movement from a local, everyday standpoint.

"Movements are not just the dramatic moments," Chatelain said. "It's about the everyday acts of resistance that the marches are also trying to represent. Everyone has the capacity in their communities to resist."

A single event, while important to rally on a grass-roots level, is often politically ineffective in its immediate aftermath — it can take years to figure out how a demonstration like the Women's March will inform public policy, if at all.

Georgetown history professor Michael Kazin noted that when it comes to effectively altering legislation, public demonstrations alone have a "checkered history of success." To affect policy, Kazin said, a march needs to be part of a greater social movement with clear and consistent objectives, constant pressure on the Legislature, dedicated support from its base and continued momentum. Perhaps most importantly, creating systemic change has historically called for one last critical element: help from people in government.

"All successful movements in American history have both inside and outside strategy," Kazin said. "If you're just protesting, and it just stops there, you're not going to get anything done."