Accessibility links
'Elena Of Avalor' Takes The Throne As Disney's First Latina Princess Elena Castillo Flores rules the port city of Avalor while learning about life and leadership. Her creators say they want their show to reflect the diversity of Latino cultures and experiences. 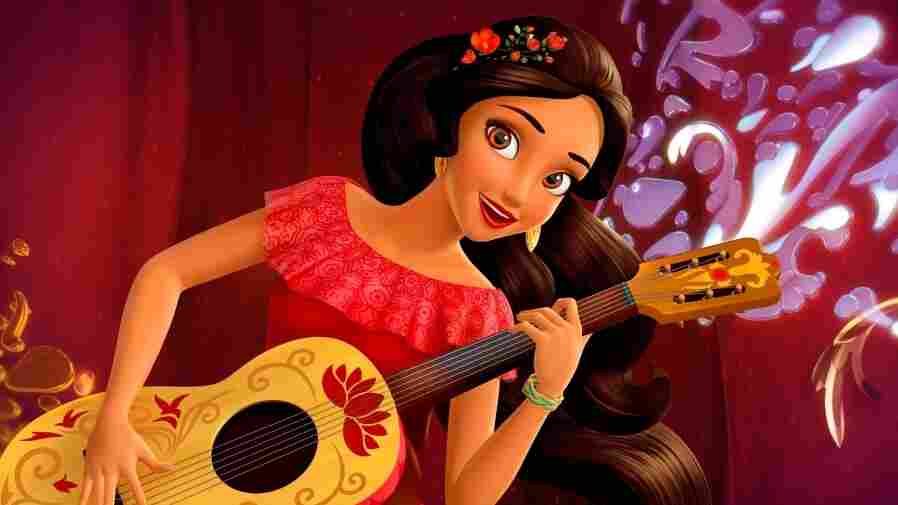 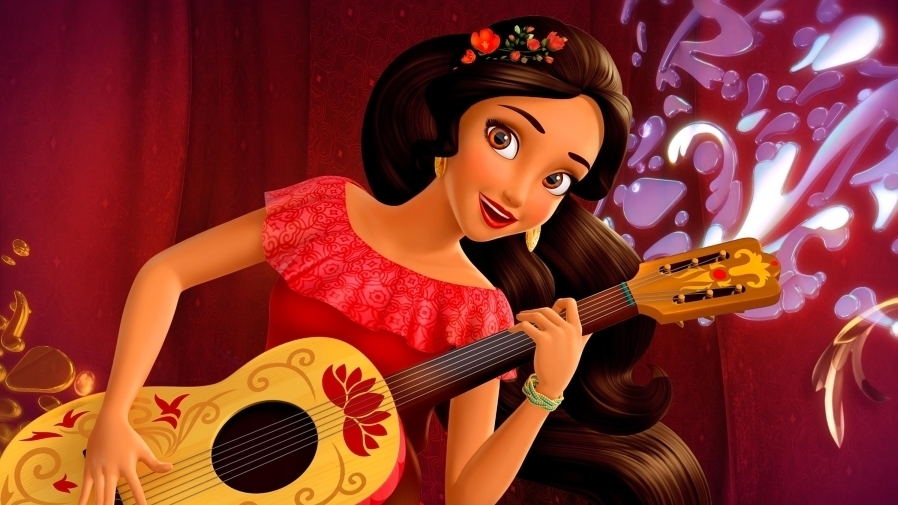 Elena of Avalor is Disney's first Latina princess. Her show features music drawn from all over Central and South America.

This year, Disney premiered its first Latina princess: Elena Castillo Flores, better known as Elena of Avalor. She sings and plays guitar, she goes on adventures, rules her kingdom and has her own highly rated animated TV show.

The 16-year-old crown princess had been trapped in an amulet for 41 years (so technically, she's 57 — which might make her one of Disney's oldest princesses, but that's another story). Her backstory begins when another animated Disney princess, Sofia the First, sets her free. Elena confronts the evil sorceress Shuriki, voiced by Jane Fonda, who killed her parents and took over the kingdom.

I wanted to there to be a princess that looked like me, with dark skin and hair. We're telling Latinas, 'We see you. You matter.'

Elena avenges her parents, drives Shuriki out, and begins her reign over the port city of Avalor. "She is the first princess actively ruling her kingdom, and I think that's new," says Aimee Carrero, the Dominican-Puerto Rican actress who lends her voice to Elena. "So she has a day job. You know, there's no Prince Charming, she's her own hero. She's learning that leadership is about sacrifice, and not about this sort of totalitarian control over the people she rules — and sort of resembles more of a president than princess. There's never been a better time to tell this story."

Since Elena didn't age inside the amulet, she's still a teenager who tries to convince her grandfather she's responsible enough to rule. Both grandparents are on her grand council. Her little sister, Isabel, is an inventor. Elena has an animal spirit guide, and rides around on flying creatures that are half jaguar, half macaw.

"I've been waiting for a Disney Latina princess since I was a little girl," says Silvia Olivas, a co-producer and head writer of Elena of Avalor. "I ask the same question: Why did it take so long? But I'm happy that we're here now. I think about when I was a little girl, what I wanted to see. Now that I'm a mom, it's so important to me to make sure we get Elena right. I wanted to there to be a princess that looked like me, with dark skin and hair. We're telling Latinas, 'We see you. You matter.'"

Elena leads her people in a Puerto Rican-style parranda.

There are also characters of many hues, to reflect the diversity of Latinos. Some of the villagers are drawn to resemble indigenous Peruvians. And the locations borrow from colonial churches, Aztec and Mayan pyramids, and the ruins of Machu Picchu.

The show was also inspired by Latin American traditions and myths. "She'll travel into jungle to save her sister who's been kidnapped by these shape-shifting creatures. Or she'll try to deal with this volcano monster, and every time he gets angry, the volcano erupts," says executive producer Craig Gerber, who created Elena. He calls today's princesses "superheroes with tiaras."

"She's going to eventually travel to the magical realm that the jaquins come from — these are the flying jaguars," he says. "And the sport they play in Avalor is based on the ancient Meso-American ballgame."

One episode celebrates Brazilian-style Carnival; another Mexican-style Day of the Dead. The latest episode about Navidad — Christmas — includes a Puerto Rican-style parranda, or caroling.

The story's telling that girls can do anything.

"Indirectly you are sort of teaching everybody about who we are and I think that's a wonderful thing," says Moreno. "I think to have a better understanding of a culture, that creates empathy. And that is so badly needed nowadays."

At Disney's California Adventure, Princess Elena already has her own parade and greets children wearing her long red gown. That's where we find some of her fans. "I like that she's brave and she likes to go on adventures," says Lauren Stenger, 7.

"She's fierce, because she's a great ruler," says 10-year-old Milani Tibayan, with her 11-year-old sister Jay adding, "The story's telling that girls can do anything."

Dora Vilanova says Elena is a great Latina role model for her 4-year-old brunette daughter, Liana. "The other day, she was talking about the princesses with blonde hair. And she said "'Mommy, the villains have darker hair color,'" Vilanova recalls. "And now she says that Elena looks like her and she has the same hair color she does. That was sweet. she looks up to her."