Accessibility links
'Passengers' Has A First-Class Sci-Fi Premise, But The Script Flies Coach The Chris Pratt/Jennifer Lawrence film about two beautiful people alone on a vast spaceship doesn't have the courage of its creepy convictions, and devolves into rote rom-com sentiment.

'Passengers' Has A First-Class Sci-Fi Premise, But The Script Flies Coach

'Passengers' Has A First-Class Sci-Fi Premise, But The Script Flies Coach 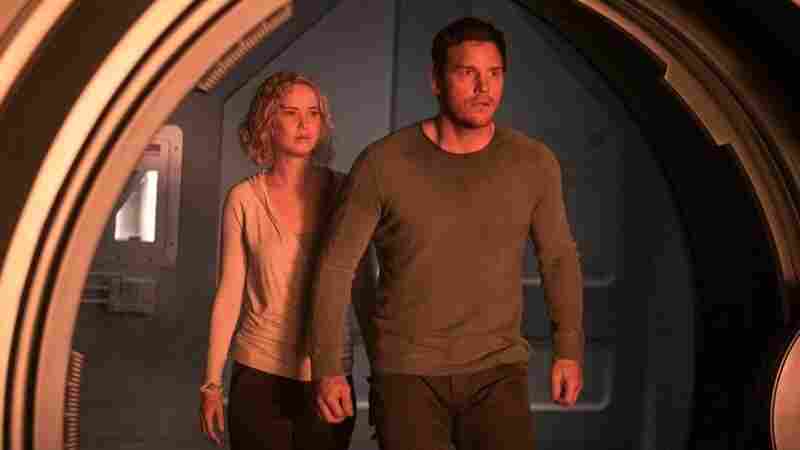 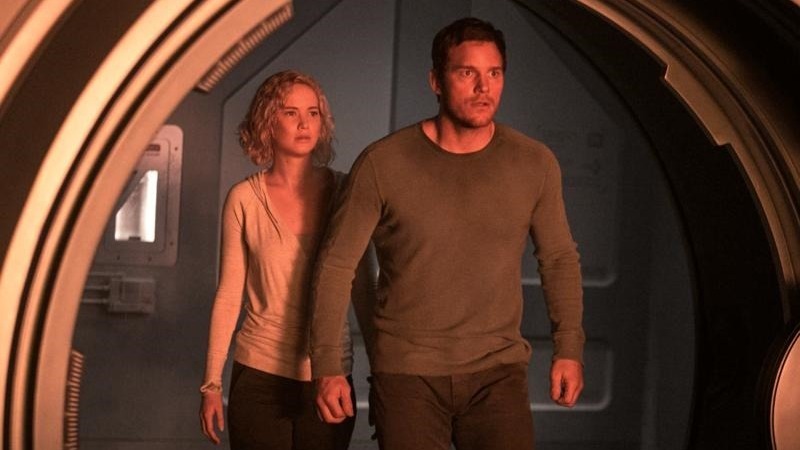 Passengers, a fairy tale set aboard a luxury spaceliner, has billion-dollar ideas and five-cent guts.

The premise is marvelous: Jim, one of 5,000 pilgrims hibernating through the 120-year trip to the corporate settlement planet Homestead II, wakes up 90 years early when his cryo-pod breaks down. Returning to stasis is impossible, so he finds himself in a weird inverse of Matt Damon's dilemma in The Martian: With shelter and sustenance enough to die an old man, but condemned to run out the decades confined to a space Hilton with only a bromide-spouting robot bartender (Michael Sheen, winking his way into the Movie Android Hall of Fame) for company. Because Jim is played by Chris Pratt—who is handsome and charming but cannot convey doubt or fear—his existential pickle registers merely on a comic level.

After exhausting himself trying to break into the ship's bridge (the crew are all asleep, too) and beating back thoughts of suicide, Jim spies a sleeping beauty named Aurora (Jennifer Lawrence) in her pod. He looks her up in the ship's manifest. She's a writer — a crummy one, to judge by a sample she will later pronounce "some of the best work I've ever done." Undeterred, he reads her entire bibliography. Like Bill Murray wooing Andie MacDowell through trial-and-error in Groundhog Day, Jim has all the time he needs to become an Aurora expert (although Andie MacDowell was allegedly conscious in that movie). After spending months trying to talk himself out of it — or however long it takes to grow a caveman beard so phony it wouldn't score you a six-pack from a half-blind 7-Eleven clerk on prom night — Jim jimmies Aurora's capsule and wakes her up. Even though this means condemning her to share his fate: captivity and (near) solitude until death.

All of this? Is sticky and troubling and good.

And then, through the Sirius-level glow of Lawrence's presence, The Imitation Game director Morten Tyldum's diverting sci-fi drifts into more familiar but still pleasing romantic comedy turf as Jim and Aurora's preordained courtship proceeds a-space. Jim tells Aurora that her awakening, like his, was a fluke, but we're all waiting for the scene in which she discovers he stole her future because he couldn't stand to be alone. That is a dramatically rich sin, more than enough for one movie. Unfortunately, this one ladles other, less interesting sources of conflict on top of it.

The further dynamics of the plot are somewhat perishable. One or two are genuinely surprising. Too many of them seem inspired by the marketing department's mandate for an explosion they can put in the trailer. And there's the rub: Every time Tyldum rustles two sticks together long enough to get some sparks going (and these two beautiful actors never seem particularly hot for one another), the movie undermines itself with a howler of a line or, more often, a decision by one of the characters that makes no sense. It doesn't help that the exterior shots, intended to give us scale and grandeur, have a flat, screensaver-y look. Yes, of course Passengers relies on CGI to depict the yawning eternity of space. Gravity and Interstellar made their digital environs seem real; Passengers does not.

The script, by Jon Spaihts, has kicked around Hollywood for nearly a decade. (He also wrote Prometheus, another space-quest that opened grand and finished dumb.) It was nearly made a few years ago, on a substantially lower budget, and the first act is weird and strong enough to make you pine for the thriftier, thinkier iterations that might've continued its sardonic tack. (Danny Boyle's Sunshine and Duncan Jones' Moon were both cheaper, smarter entries in this genre.) Because Jim was riding in steerage, basically, as an indentured servant who will tithe the company a cut of his earnings for the rest his life, the ship's systems keep denying him the perks it's saving for the first class passengers when they wake up in 90 years. So he can have plain coffee but not espresso, and eat what looks like some kind of synthesized protein paste but nothing that looks like real food. There's also a clever bit where he tries to make a mayday call about his janky sleep-pod and is directed to Customer Service.

I wish the film had the integrity to hold its satiric bent, or, once it becomes a romance, to see its fable-logic through to the end. But Pratt and Lawrence are America's sweethearts now, and nothing must be permitted to harm them, and so shmoopy sentiment wills out. But in space, no can hear you scream, "You complete me."