Accessibility links
What Did Election 2016 Teach Us About Latino Voters? There were expectations that Donald Trump would do worse with Latino voters than any candidate in history, but that didn't happen. 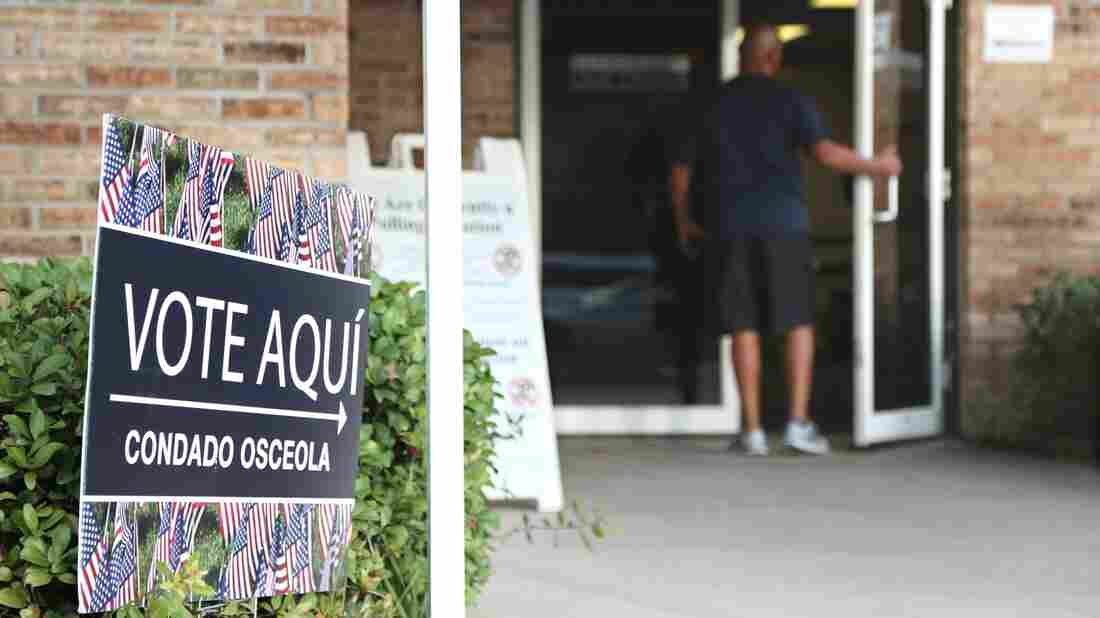 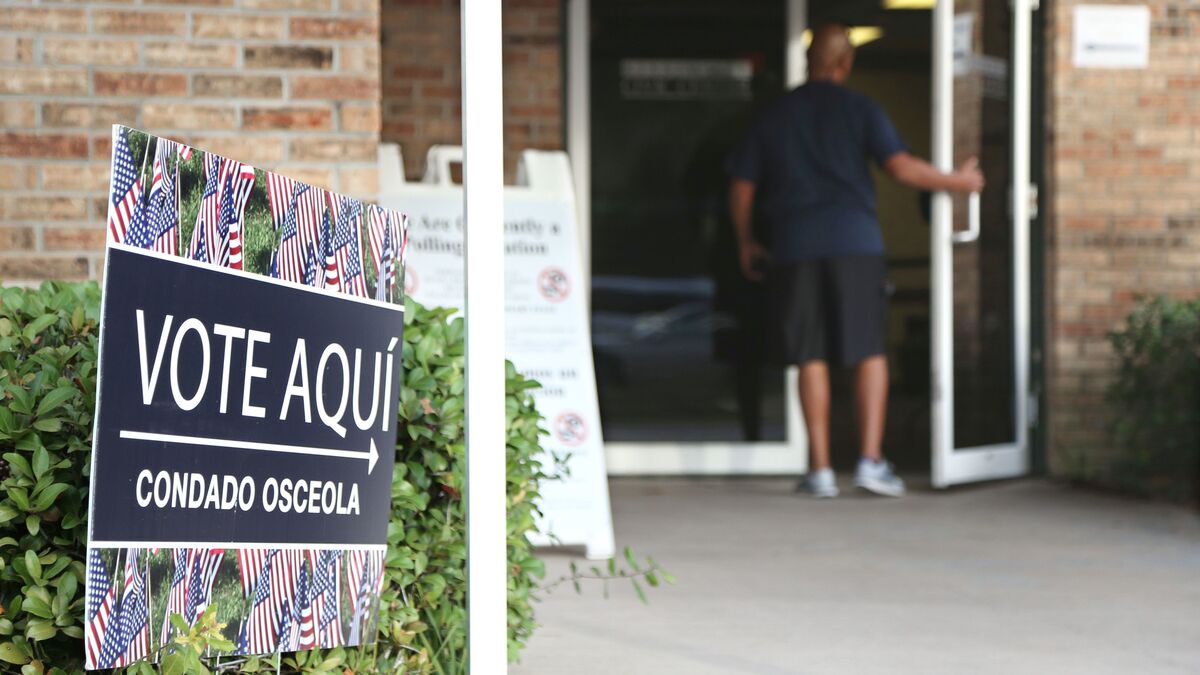 A voter enters an Osceola County polling station during early voting in the federal election in Kissimee, Florida on October 25, 2016.

There were two major assumptions about Latino voters throughout the presidential campaign:

(2) the anti-immigration rhetoric that launched Trump's campaign would push conservative-leaning Hispanics to flee the Republican Party.

Neither of those assumptions entirely panned out as expected.

True. A record number of Latinos did vote this November. But the truth is complicated. The official national exit poll, the one commissioned by the big media organizations, suggests the Latino share of the electorate was higher than ever before — about 11 percent, compared to 10 percent in 2012.

"It's very possible that the Latino vote, while reaching a record, may have been swamped by other groups of voters," said Mark Hugo Lopez, the director of Hispanic Research at the Pew Research Center, pointing to states like Florida which Trump won.

We won't know the percentage of Latinos who participated in the 2016 election until Census data is released in the spring. But for some background, 48 percent of eligible Hispanic voters turned out in the 2012 election, down from 49.9 percent in 2008.

Lopez says it's highly likely Latino turnout saw a small uptick this November, just based on sheer population growth. "Although how much of a slight uptick remains to be seen," he said. "It's unlikely the Hispanic voter turnout rate matched that of whites or matched that of blacks ... It doesn't seem like there was a Trump effect or a surge in Latino voter participation that many analysts were expecting."

For some comparison, in the last three presidential elections, both whites and blacks had voter turnout that was at or above 60 percent. 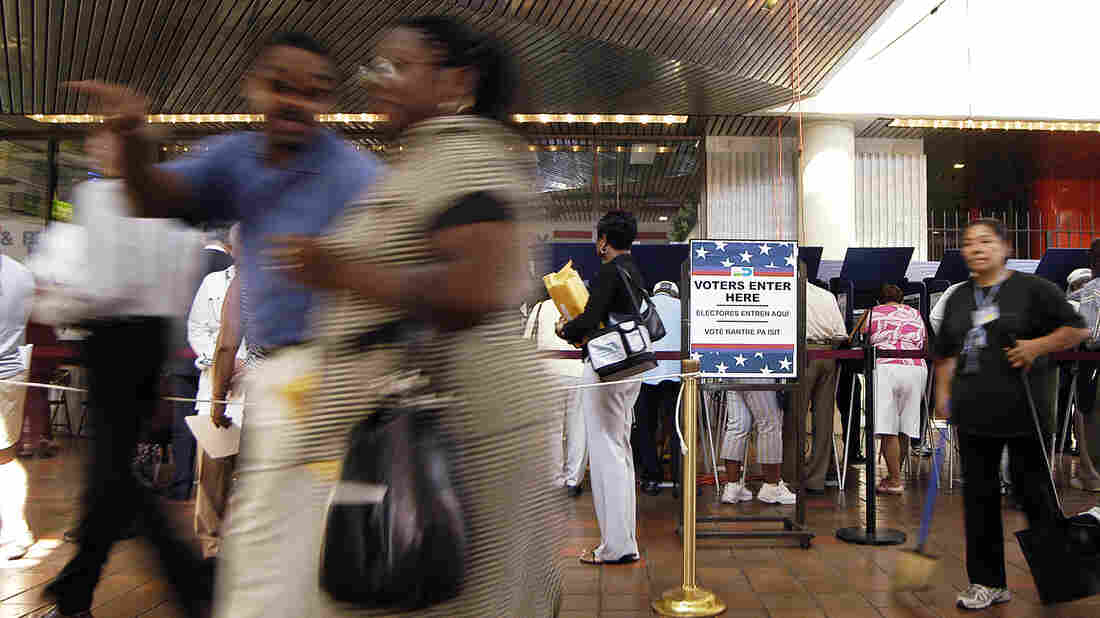 Latino voters go to the polls for early voting at the Miami-Dade Government Center on October 21, 2004 in Miami, Florida. A key constituency in Florida, many wondered how conservative Latinos would vote after now President-elect Trump's remarks on immigration. Gaston De Cardenas/Getty Images hide caption 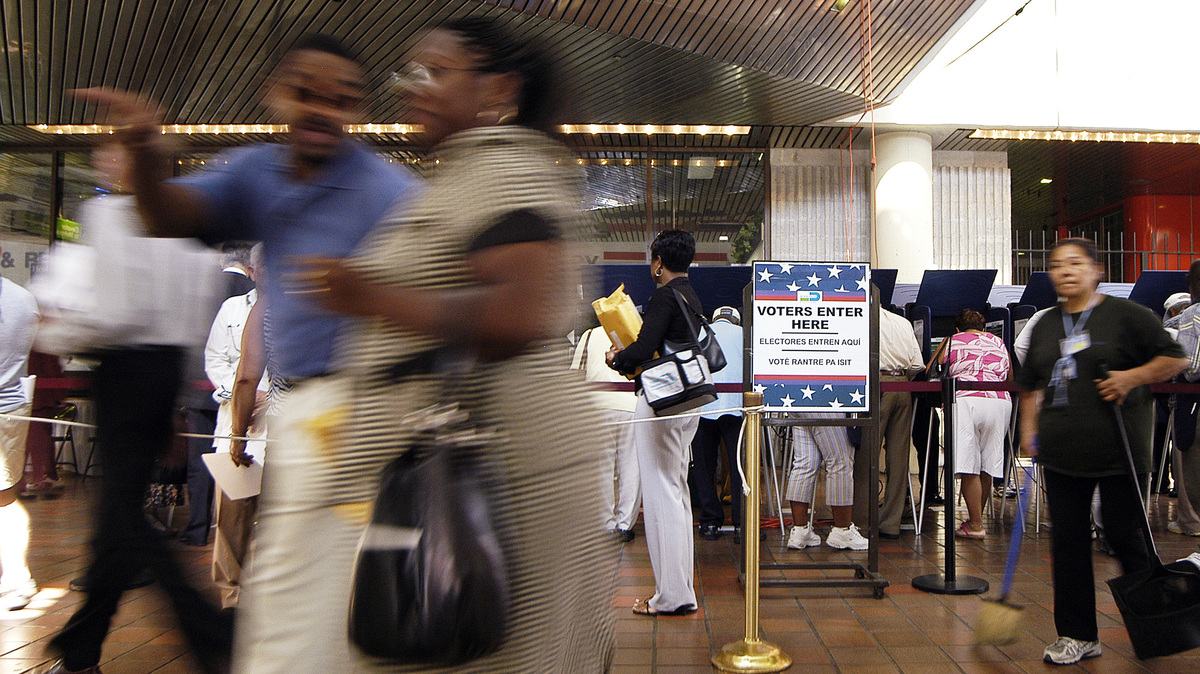 Latino voters go to the polls for early voting at the Miami-Dade Government Center on October 21, 2004 in Miami, Florida. A key constituency in Florida, many wondered how conservative Latinos would vote after now President-elect Trump's remarks on immigration.

Unlike the surge, which is still awaiting Census data confirmation, prediction No. 2 has data — so we'll spend more time on it.

Months ago on a reporting trip to Orlando, I met Anthony Suarez, a Republican lawyer from Florida. He's the president of the Puerto Rican Bar Association. He knows the local Puerto Rican community well, so he was anxious about Trump's candidacy and what it would mean for his fellow Latino Republicans. In fact, he had this bold, ominous prediction:

"I thought that the rhetoric coming out of Donald Trump was so toxic, that it would eventually turn off the Hispanic community as Barry Goldwater turned off the African-American community." 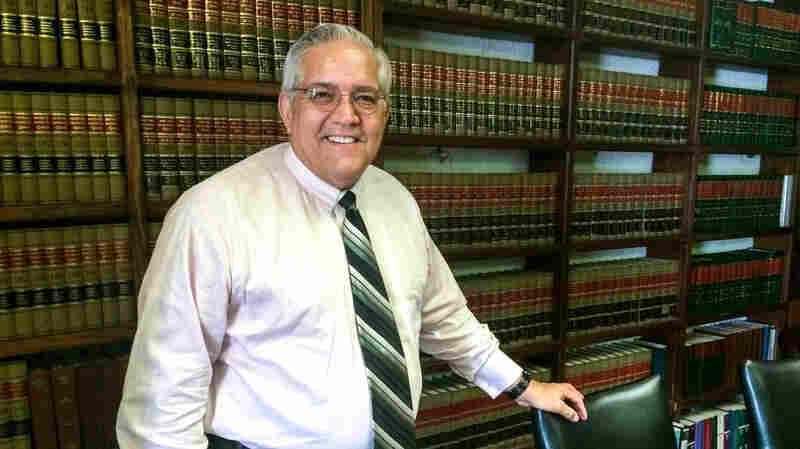 Anthony Suarez was worried his fellow Republican Hispanics would flee the GOP this year because of Donald Trump. He voted for Hillary Clinton Asma Khalid/NPR hide caption 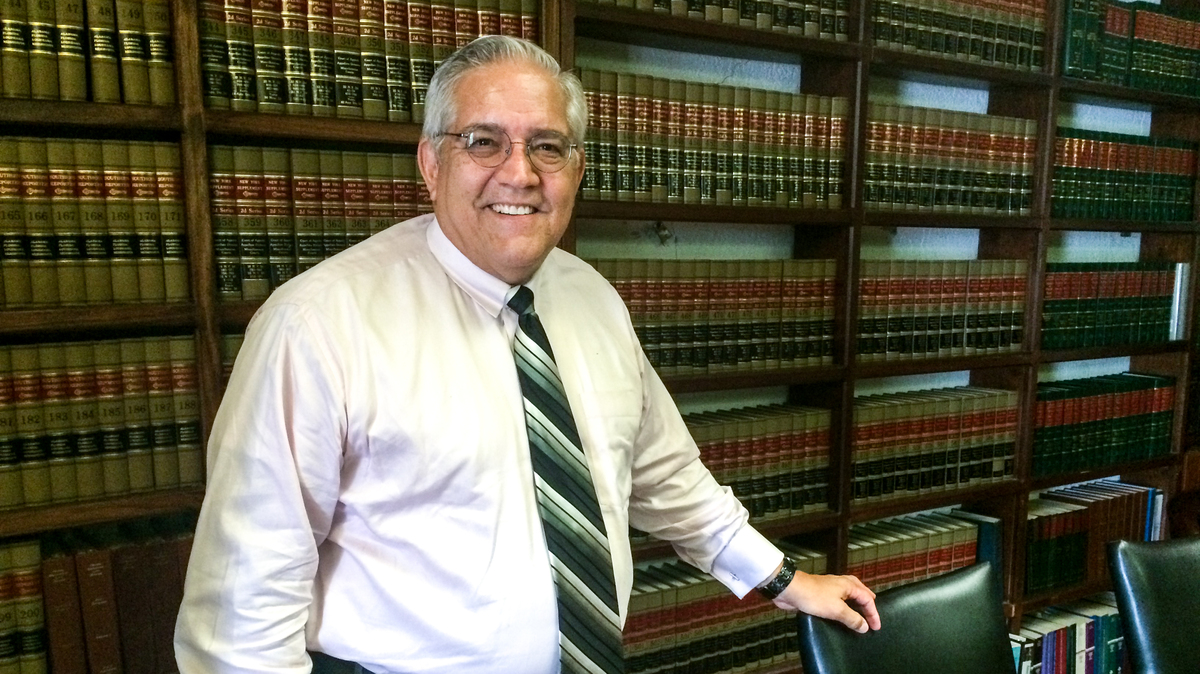 Anthony Suarez was worried his fellow Republican Hispanics would flee the GOP this year because of Donald Trump. He voted for Hillary Clinton

Goldwater's opposition to civil rights in the 1960s is one reason black voters make up the base of the Democratic Party today. (Roughly 90 percent supported Clinton this past November).

But, on election night, Suarez, who voted for Hillary Clinton, never witnessed that Goldwater moment. Instead, he found himself surrounded by people he described as "Trump Hispanics" at a party for a local Republican candidate.

"It certainly was more than I would have thought," Suarez said. "I was surprised to see it."

Suarez miscalculated, but so did a lot of analysts.

Maybe the big lesson from 2016 is that a solid number of Latinos are conservative, and they will consistently vote for Republicans. Roughly 30 percent of Hispanics chose a Republican candidate in each of the last three election cycles.

According to the official exit poll, Trump performed roughly on par with Republican Mitt Romney, capturing 28 percent of the Latino vote, though that number is up for debate. Most notably, the polling firm Latino Decisions conducted an Election Eve poll that showed only 18 percent of Latinos chose Trump. (Two of the primary analysts with Latino Decisions — Matt Barreto and Gary Segura — did polling for the Clinton campaign though they were walled off from the firm's work during the campaign).

Frankly, regardless of which statistic is correct — 28 percent or 18 — the truth is that a substantial number of Hispanics voted for Trump.

And one major reason is religion.

"There was this real skew toward religious liberties in the last eight years of the Obama administration," Bramnick said. "And, Mr. Trump said, 'You guys are losing your right to speak,' and he said, 'If I become president ... you will have your right to speak like everybody else.'"

Trump made a concerted effort to reach out to Latino conservative Christians, creating a Hispanic advisory council and meeting with ministers. Both of his sons visited Latino congregations on the final Sunday before the election.

And, presumably, at least some of this outreach paid off. 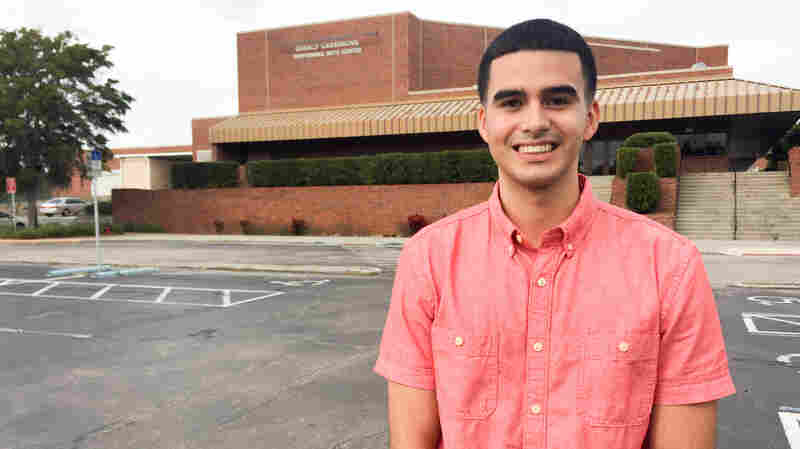 Joseph Adorno voted for Trump but would have preferred a candidate like Marco Rubio or Ben Carson. For Adorno, a vote for Trump was essentially a vote for party loyalty and Christian values. Asma Khalid/NPR hide caption 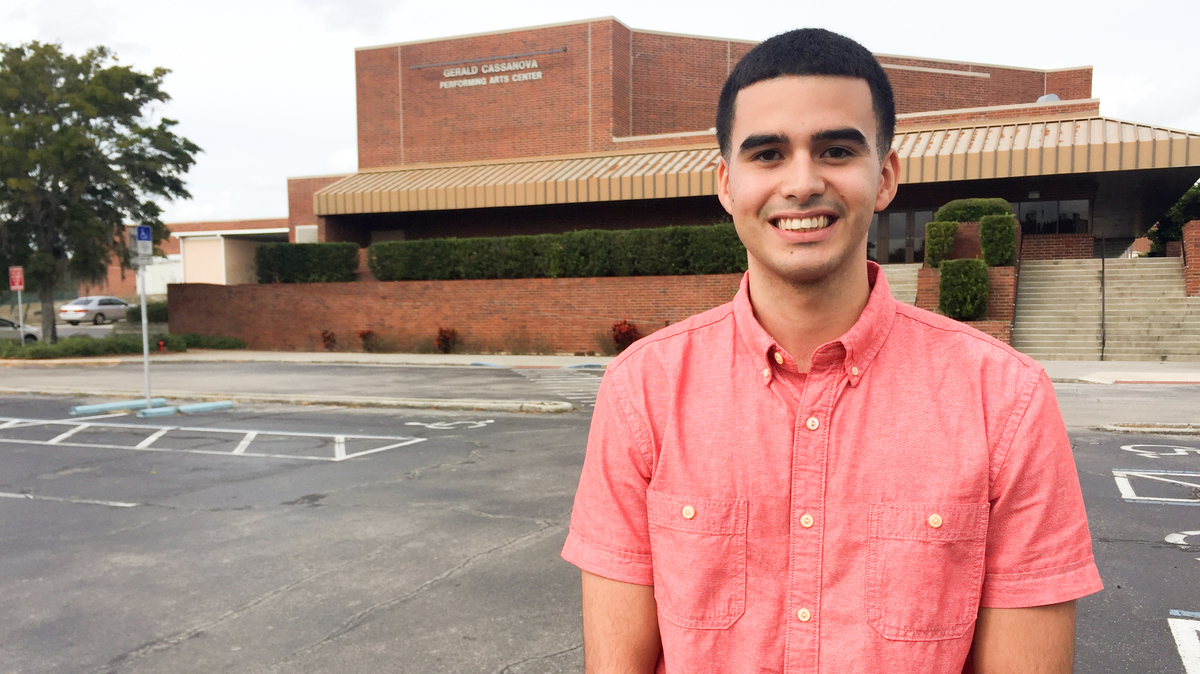 Joseph Adorno voted for Trump but would have preferred a candidate like Marco Rubio or Ben Carson. For Adorno, a vote for Trump was essentially a vote for party loyalty and Christian values.

"So, I ended up voting for Donald Trump 'cause I thought he was closer to the values that I have," said 23-year-old Joseph Adorno with a sigh. And then he added, "I mean, he's obviously not perfect."

Adorno would have much rather preferred a candidate like Marco Rubio or Ben Carson. For Adorno, a vote for Trump was essentially a vote for party loyalty and Christian values.

"I guess it's more about the Republican Party in a way," he said. "You know, the person that was gonna be elected would nominate a lot of people in power, like the judges, and I felt [Trump] would nominate more conservative judges."

But, for other Latinos, like Orlando Diaz, 33, from Maryland, a vote for Trump wasn't about party loyalty; in fact, it was the polar opposite feeling — that Trump defied traditional party affiliation.

"In my eyes, I did see Trump as a different kind of Republican," said Diaz, who up until this election season was a registered Democrat.

Diaz had voted for President Obama, but was no fan of Clinton as the Democratic nominee this year.

"What I saw in Hillary Clinton was just more of the same. And what I saw in Trump was change," Diaz said. "When Bernie wasn't nominated that's pretty much when I knew I was gonna go over to Donald Trump."

Diaz said, in particular, he liked the way Trump spoke about the Department of Defense and veterans. He saw Trump as a man of strength, and he liked that.

"I have 12 years of service in the army," Diaz said. "One of the things that President-elect Trump has mentioned is that he wants to increase the size of the Army, which I think is necessary during the situations that are going on right now in the world."

Immigration wasn't the threshold issue Democrats hoped it would be

Diaz, like other Trump-supporting Latinos, was well-aware of Trump's comments about Mexican immigrants and a border wall, but he didn't take them personally.

Still, he wishes Trump would have worded some of his remarks differently, and he understands why some Latinos were bothered. "I definitely understand how it could alienate people and how people could take it as offensive," he said.

And, it wasn't only Diaz who thought this. Nearly every Trump-supporting Latino I interviewed told me some version of — well, clearly Trump wasn't talking about all Hispanics.

"It didn't trouble me at all because he was talking about people who had come across the U.S. illegally," said Julian Camacho, a Trump voter from California.

Camacho's family has roots in Mexico, but they've lived in the United States for generations.

Even for some new immigrants, like Flaminio Guerrero from Colombia, the immigration issue wasn't a deal-breaker. Guerrero now lives in Georgia, where he recently became a citizen. This November was the first presidential election in which he was eligible to vote.

"I understand Mexicans when they get offended," Guerrero said. "But, at the same time, when I first came to America, every time someone asked me, 'Where are you from?' And, if I would say Colombia, immediately they would think of drugs."

"I was ashamed," he said. "But at the same time, I could not call these people racist, because they're just facing a reality."

Guerrero said the truth is — in the days when he first moved to the United States, Colombia was exporting a lot of drugs. "Most of us, on the minority groups, get offended for things that in reality are actually true," he said. "We have to learn to own our sins."

And, besides, for him, a vote for Trump wasn't really about immigration, it was about the economy. "I liked the fact that he's not an insider; he comes from the outside; he comes from the business world," Guerrero said. "He knows how to negotiate."

A Latino floor for Republicans

Perhaps the lesson is that any generic GOP candidate will always get a guaranteed percentage of the Latino vote.

"It's possible that there is a floor among Latinos for Republicans, and that may be somewhere around 20 to 25 percent," said Mark Hugo Lopez with the Pew Research Center. But, he added, the candidate still matters. "The right candidate can perhaps adjust that floor up or down."

Lopez thinks there's a bigger lesson. He points out that for years, pundits have said that a Republican candidate needs at least 40 percent of the Hispanic vote to win the White House.

But... "A Republican candidate won the White House without 40 percent or more of the Hispanic vote," he noted. "Perhaps this election only goes to show you that the Hispanic vote, while growing in importance, is not the decider of national elections."

If you think about this another way, Clinton was on par with Obama levels of Hispanic support in 2008, capturing two-thirds of the Latino vote, but still lost the election.

So, although the demographics of the country are changing, and every year, Latinos are becoming a larger share of the population, for now, it's possible to win less than a third of the Latino vote, and still win the presidency.

Thanks to the Facebook group "Latinos/Hispanics for Donald Trump" for connecting us with some voters.