Accessibility links
Conservatives Wonder, Will The Real Donald Trump Please Stand Up? Is the president-elect conservative enough for the conservatives who supported him? Evangelical leaders are watching. 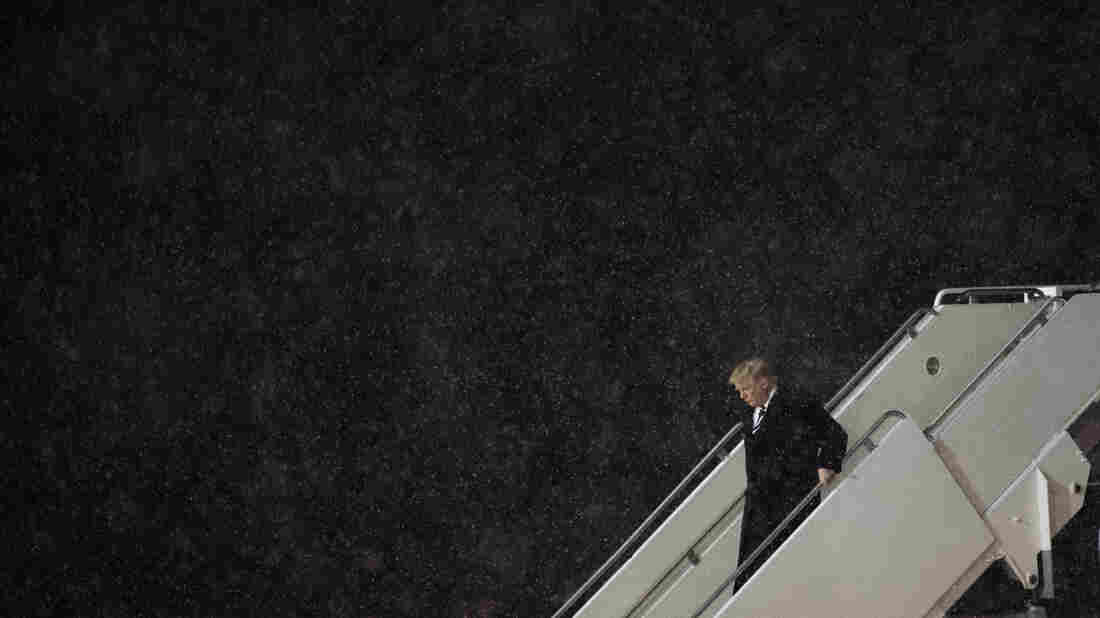 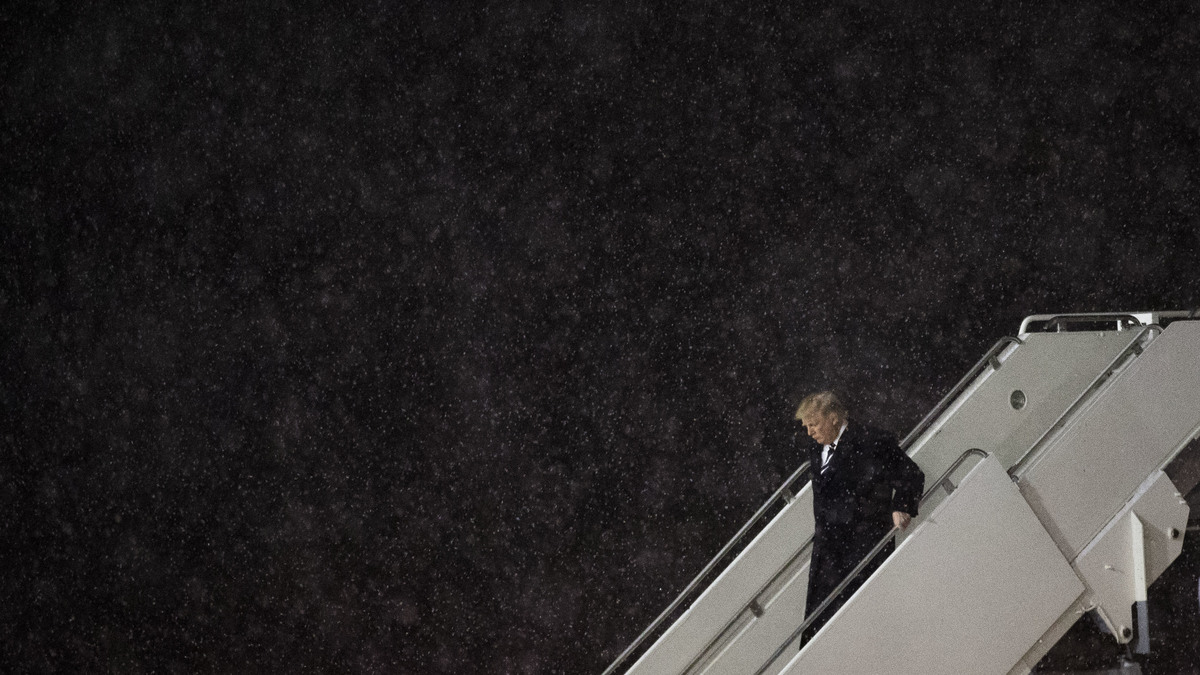 From social media to his victory tour, President-elect Donald Trump has strayed from tradition.

Here are some of the ways Donald Trump has described himself during the 2016 presidential campaign:

"A conservative with a heart."

But talk to conservative activists, and it's not unusual to still hear things like this:

"Well, I remain a skeptic," says activist and GOP campaign veteran Rick Tyler, who adds, "I don't know that Donald Trump is a conservative."

Billionaire businessman, reality TV star and first-time candidate Trump challenged, insulted, befuddled, shocked and, finally, took over the Republican Party on his way to becoming president-elect. He managed that accomplishment without adhering to traditional conservative principles. In fact, at times it was hard to discern any ideology at all besides a loyalty to himself and a determination to completely upend the American political process.

With just weeks until he is sworn in as the 45th president of the United States, conservative activists — like many Americans — will be watching to see just how conservative a president Trump is. 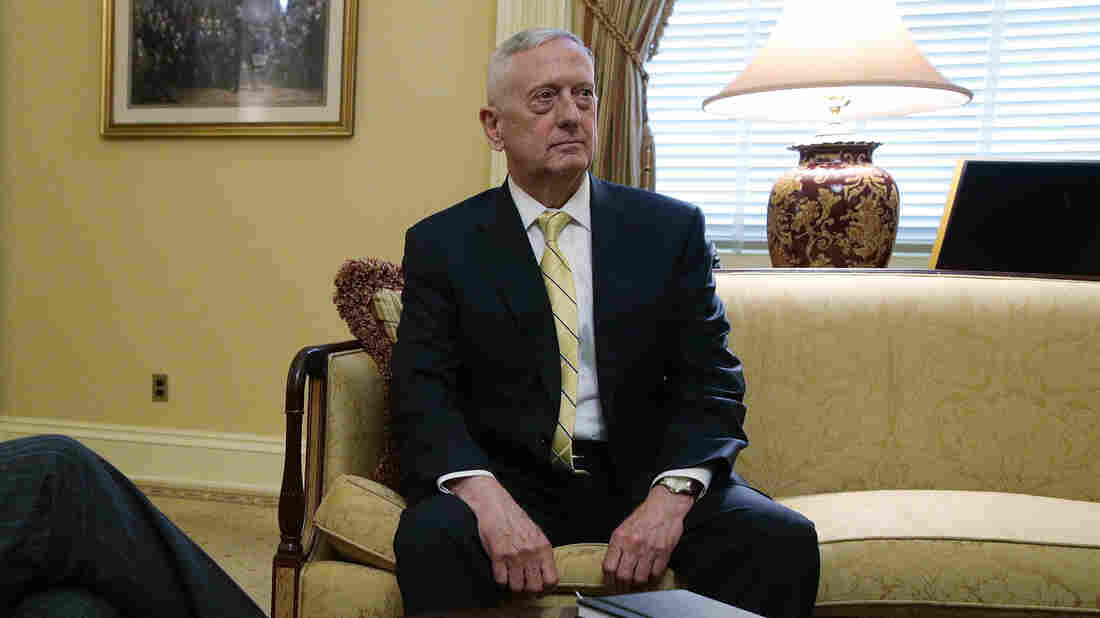 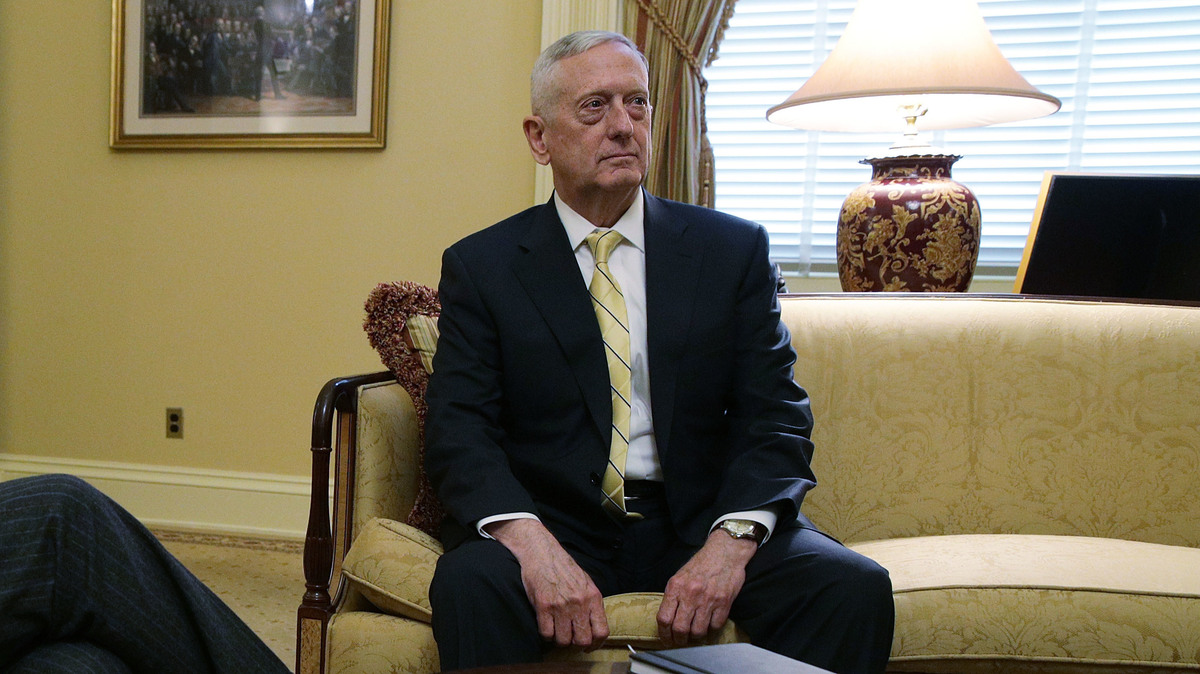 Defense Secretary-nominee James Mattis is one of the Trump Cabinet picks that reassure conservatives.

Tyler was communication director for Texas Sen. Ted Cruz's presidential campaign. Cruz entered the race thinking he would secure the nomination with help from the GOP's most conservative members — especially evangelicals and members of the Tea Party, who viewed him as a hero for his repeated efforts to repeal Obamacare.

Cruz lost, and eventually endorsed Trump in late September, prompting Tyler to say, "It's mourning in America for conservatives. We lost our leader today."

On Election Day, Tyler says, he voted not for Trump, but for independent candidate Evan McMullin.

Still, he says, he's been watching closely as the president-elect assembles his team, and thinks there are at least some indications that Trump will change as president, and actually govern as a conservative.

"If you look at his Cabinet appointments, I can't imagine a more conservative Cabinet than he's picked so far," Tyler says.

Then he adds something he never imagined during the campaign: "Some might say it would be even more conservative than Ted Cruz's Cabinet."

He cautions, though, that Trump's position on free trade and trade deals remains anything but conservative.

Then there's Trump's undisciplined use of Twitter — unprecedented for someone in his position — and a very un-conservative approach to communicating.

"You can say you're joking around, but it confuses a lot of people," Tyler says. It may be OK to say things to confuse our enemies, he adds.

"That's certainly true in war," he says, but "I don't think it's OK to confuse the world in diplomacy and foreign policy." 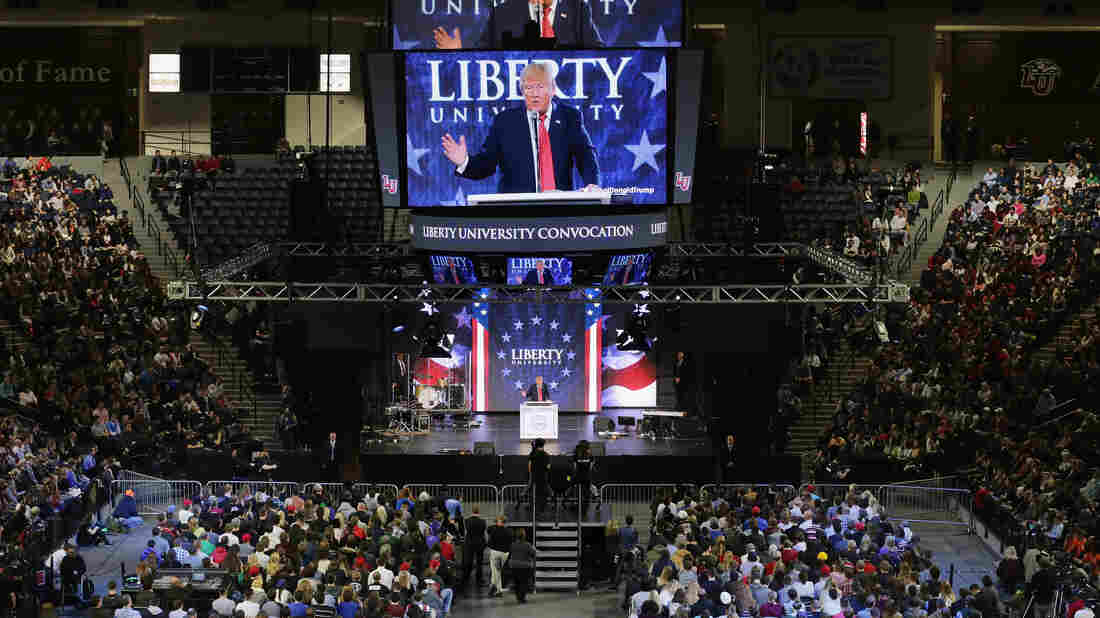 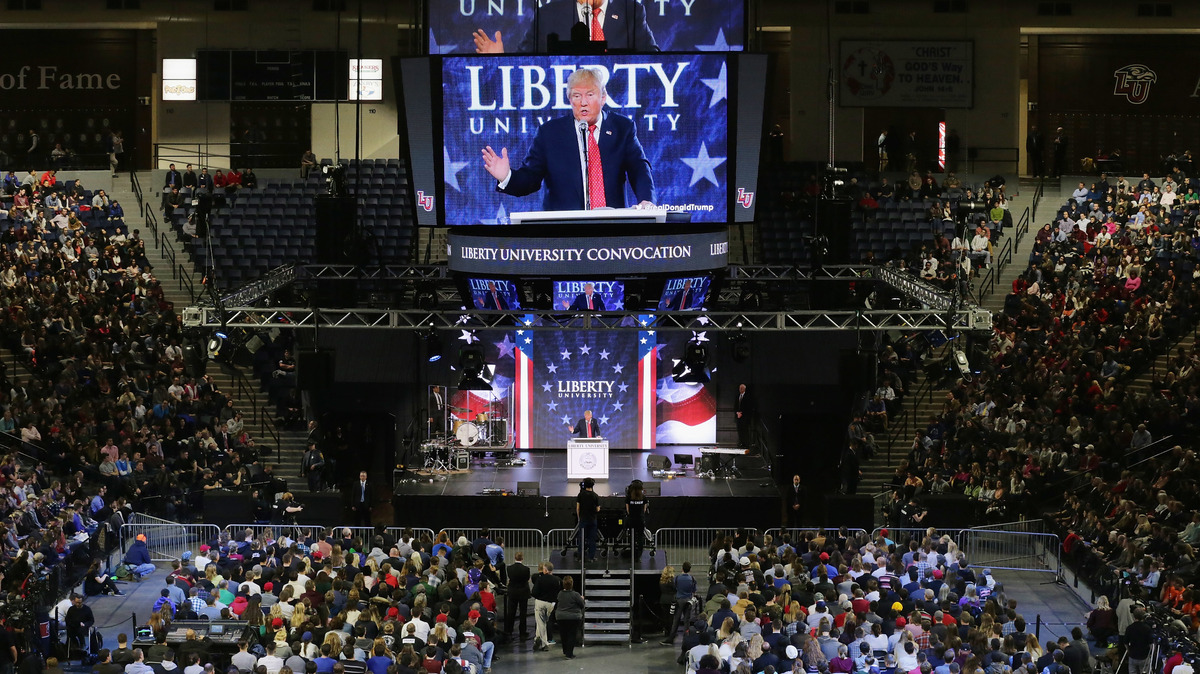 Trump delivered the convocation at Liberty University, a private Christian university in Virginia founded by televangelist Jerry Falwell, in January.

Bob Vander Plaats is one of the country's top evangelical voices. Based in Iowa, Vander Plaats backed Cruz for president, but says he voted for Trump and has been friends with him for years. He recalls a meeting with candidate Trump this summer, after the primaries were over.

What Will Trump's Twitter Strategy Be When He Becomes President?

'Dawn Of A New Unified Republican Government' Coming In 2017

In fact, when the infamous Access Hollywood tape emerged, in which Trump talked about being able to force himself on women because "when you're a star you can do anything, grab 'em by the [expletive]," Vander Plaats called for Trump to quit the race. He says it was just one of many times he thought Trump's campaign was over.

Vander Plaats did vote for Trump, but says his approach going forward with the new president will be the same as he told the candidate at that meeting in the summer.

One thing that Vander Plaats has always been happy about was Trump's selection of Indiana Gov. Mike Pence as his running mate. To evangelical voters, the presence of Pence as vice president is very reassuring.

"Mike Pence is one of us," says Vander Plaats, "He comes from us, not just to us."

Very early on, he says, Trump will face an important test, when he decides on a nominee to replace the late Justice Antonin Scalia.

Vander Plaats puts it succinctly. "The real test: Who does he appoint to the Supreme Court." 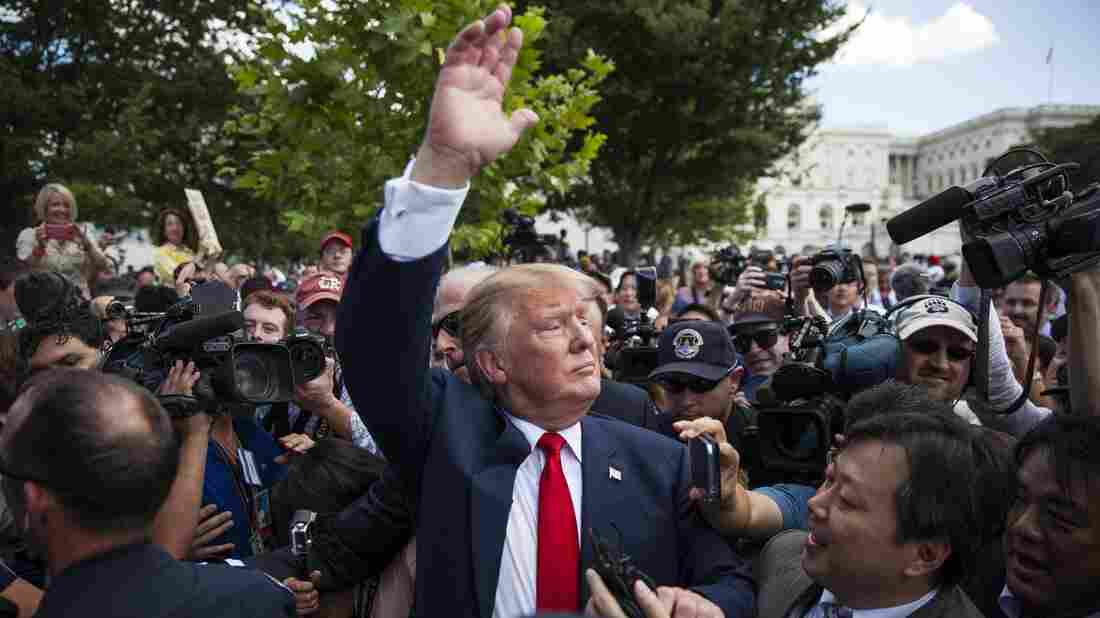 Trump waives to supporters at a Tea Party in Washington in September 2015. "For the first time our people are in the room, you know?" says a Tea Party leader. Anadolu Agency/Getty Images hide caption 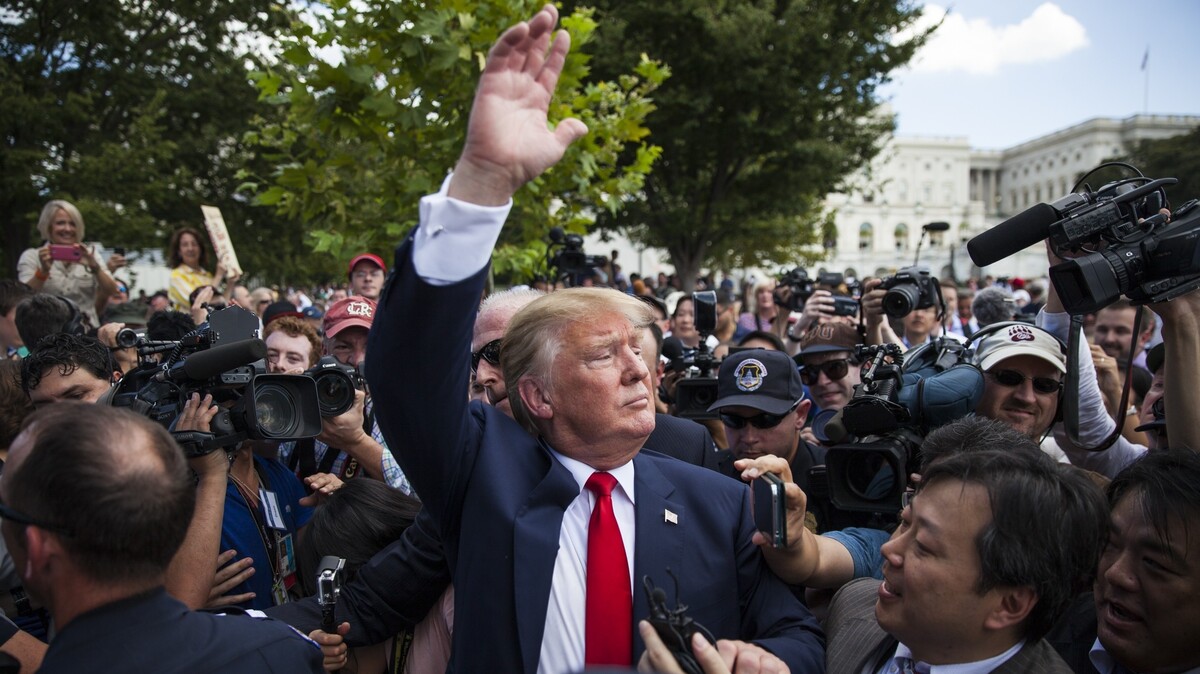 Trump waives to supporters at a Tea Party in Washington in September 2015. "For the first time our people are in the room, you know?" says a Tea Party leader.

For the Tea Party, perhaps a chance to relax?

Finally, to a group that has been an uncompromising attack force against Democrats — and even some Republicans — the Tea Party. Tom Zawistowski leads a Tea Party group in northeast Ohio, where he says they are basking in Trump's victory, and even relaxing a bit. He says it's like they've been at war for almost eight years, and that war is over. Their guys won. That, he says, will allow them to shift the focus from Washington to home.

"It's kind of a takeoff on Trump's 'Make America Great Again,' " he says. "But now it's kind of something like, 'Make our communities great again.' "

Zawistowski says the transition has been everything he has hoped for so far. He applauds Trump's Cabinet choices, including Rep. Mike Mulvaney of South Carolina, picked to be budget director.

"For the first time our people are in the room, you know? At the meeting." So Zawistowski says they now have the luxury of sitting back and watching people you trust go to work. "I think you owe them that. You owe them that respect, because they are where they are because you put 'em there.

But if it's strange to hear a Tea Partly leader say "stand down," Zawistowki says they'll still be watching.

And if Trump goes astray, or if GOP leaders stand in the way, he promises the Tea Party response will be very loud.