Listen · 7:03 7:03
After Half A Century, Inmates Resurrect The Norfolk Prison Debating Society 7:03 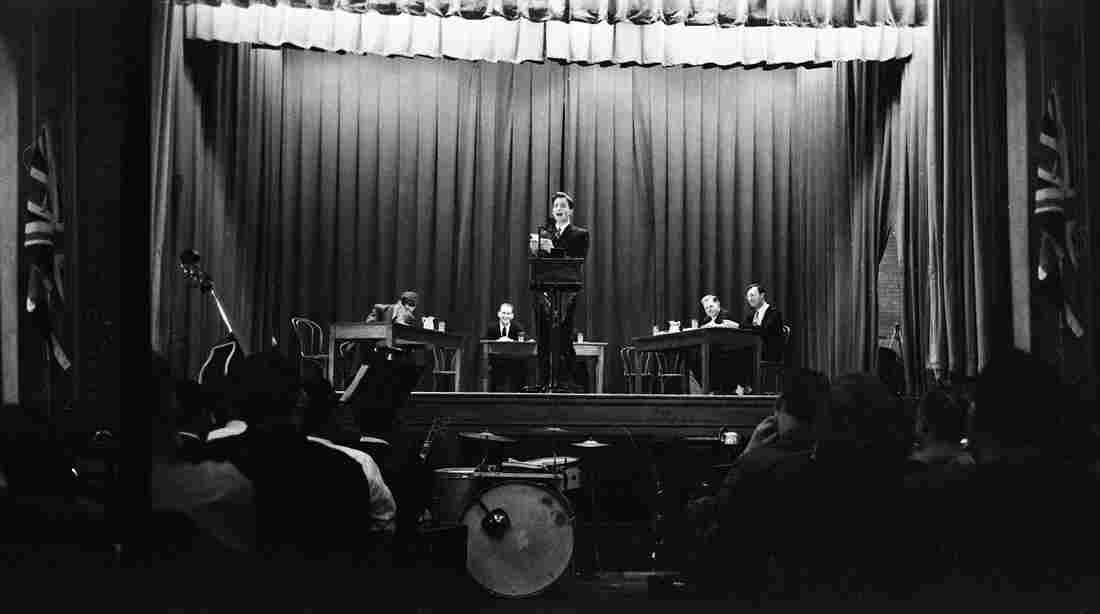 In December 1951, Norfolk Prison hosted its first international debate, against Oxford University. The debater pictured, Dick Taverne, went on to be a member of Parliament. When the prison hosted debates, church groups, local business owners, even judges and politicians would come and sit in the audience alongside inmates. Yale Joel/The LIFE Picture Collection/Getty Images hide caption 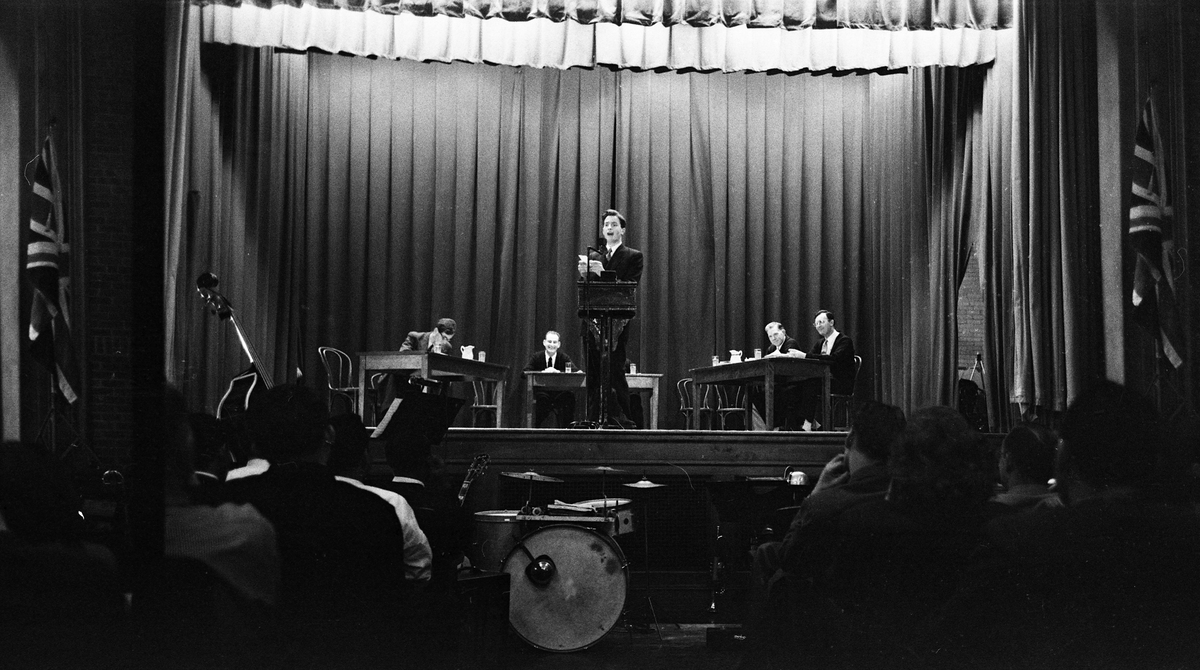 In December 1951, Norfolk Prison hosted its first international debate, against Oxford University. The debater pictured, Dick Taverne, went on to be a member of Parliament. When the prison hosted debates, church groups, local business owners, even judges and politicians would come and sit in the audience alongside inmates.

Half a century ago, a team of inmates in a Massachusetts prison held an outstanding record on the academic debate circuit. By 1966 the Norfolk Prison Debating Society boasted 144 wins and only eight losses. They won and lost against Harvard, MIT, Princeton and the like.

But when a more punitive approach to prisons swept across the U.S., the debate team dissolved. Until now.

For a few moments, the six men in the empty prison auditorium have a chance to take it all in. For Ronald Leftwich and his teammates, everything has been leading up to this day.

"We're gonna bring this back and we're gonna do this," Leftwich says. "This is important. To let people know who we are, what we're about."

Across the prison, their opponents from Boston College — fresh off a victory against Notre Dame — are getting ushered through the metal detectors.

Senior Sean MacDonald has never set foot in a prison, much less debated in one.

"It's gonna be an honor to debate them," MacDonald says. "We know that they've beaten Oxford and plenty other very, very competitive debate teams so it should be fun."

This is the same stage where Oxford University lost their winning streak one snowy evening in 1951. Where Malcolm X — then an inmate named Malcolm Little — got his first taste of public speaking. Where men at the bottom rung of society's ladder went head-to-head with college boys who'd grow up to be the likes of Larry Tribe and Leonard Cohen.

"History in the making"

As the doors open, hundreds of men take their seats — prison superintendent Sean Medeiros among them.

Only a couple of men have been incarcerated at Norfolk long enough to remember the last debate.

"Until today, we have not hosted a college debate in 50 years," the moderator announces to great applause. "So, those of you in attendance are now witnesses to history in the making."

On stage, five Boston College students sit opposite the prison debaters as the moderator introduces the topic: the future of our planet, climate change.

Resolved: that the U.S. should impose a tax on greenhouse gas emissions. Norfolk Prison will argue in favor. James Keown speaks first.

"There's a storm coming," Keown says in his opening statement. "When it first hits the Boston area the ocean will surge into East Boston, the seaport, and parts of the downtown waterfront."

And while the idea of sitting through two hours of environmental policy arguments might sound really boring, every guy in this audience is smiling, head up.

Dan Throop, captain of the prison's debate team, adds some spectacle, coming on stage in a surgical mask.

"After listening to our opponents' first two arguments, we may have to check the carbon dioxide levels in this auditorium today," Throop says to the audience.

But when Boston College's MacDonald comes out, it starts to look like these college students could win over the judges, maybe even the audience.

Inside Lewisburg Prison: A Choice Between A Violent Cellmate Or Shackles

"If you want I can hand you back the surgical mask, because under your plan we're going to have even dirtier air than we have right now," MacDonald says.

"We have a voice"

For the last two years, this group of inmates has been fighting to resurrect the Norfolk Prison Debating Society. Keown says everything comes down to this debate.

"This is a humanizing event to me," Keown says. "I mean, this is about we have a place in this world and we have a voice and we have something to share."

It's meant hours of training. They got one day a week together in a classroom, then back to their cells to rehearse alone.

While their opponents had the Internet, these guys — several of whom didn't finish high school — relied on their sisters and moms to send them articles.

And then, Keown says, there was getting a college to come in and make this all real.

"It's less about the competition, and it's more about those outside the wall willing to come in and say, we'll meet you where you're at," he says.

This idea — of intellectual exchange between inmates and the outside world — was what Norfolk Prison was founded on.

But pulling it off was never easy — someone always cried foul over the thought of violent offenders getting an education and brushing shoulders with the public. Those voices have only gotten louder, says superintendent Medeiros.

"Corrections has changed. That's the only thing I can really say is that we've changed," Medeiros says. "And I guess it's up to debate whether we've changed for the better or not."

Which meant for a debate to happen in Norfolk Prison in 2016, the Massachusetts Department of Correction kept a tight grip on everything — from what topic the men could debate, to who was allowed to speak, to the pair of reporters there to cover the event.

Despite these obstacles, there's always been a core group of inmates at Norfolk committed to making life more meaningful. Most of them are lifers.

Gordon Haas has been at Norfolk almost 40 years, serving a life sentence without the possibility of parole.

"Because we're here. And let's face it. Many of us are gonna die here," Haas says. "Just because someone is serving life it doesn't mean they stop living."

And Haas says in the days leading up to the debate, the prison was abuzz, even the staff.

"If you saw these guys when they probably first started their sentence they're totally different men now," Medeiros says.

George Vicente is up for parole on a second-degree murder charge in a few months.

When the team's captain asked Vicente to come debate some college students, he hesitated.

"I was a bit nervous because these are some smart kids," Vicente says.

But he says he knew the message a victory against those kids could send.

"It shows that there's value. And there's intelligence. And it's not just animals and good-for-nothins and people that know nothin' behind the wall because I know that's the stereotype," Vicente says. "If we lose, that's what the world expects. But if we win, the world's not expecting that."

As sunlight streamed through the auditorium windows, Vicente took the stage.

"Regarding the con team's eloquent and obviously passionate position, the pro team respectfully disagrees," Vicente said to the judges.

He speaks for almost 10 minutes, before the timekeeper lifts up a red card, signaling Vicente has just a few seconds left. If he goes over, he's disqualified — his team loses.

Signed Out Of Prison But Not Signed Up For Health Insurance

Vicente leans in, and slows down.

"Because, the evidence proves, and we agree with The New York Times that, quote, 'A carbon tax is indeed the most sensible tax of all.' Mr. Moderator," Vicente says.

Minutes later the judges announce the winner — Norfolk Prison defeats Boston by a hair, just 0.6 points. Some men held a hand over their heart, the other raised up at the stage.

But the standing ovation came when, on behalf of the entire prison, the moderator thanked their visitors for being willing to brave the journey inside.