Accessibility links
What's Ahead For The Supreme Court In 2017 Republican Senate leader Mitch McConnell took a big gamble in not advancing the nomination of a centrist judge for the Supreme Court, appointed by President Obama. It's about to pay off — big league. 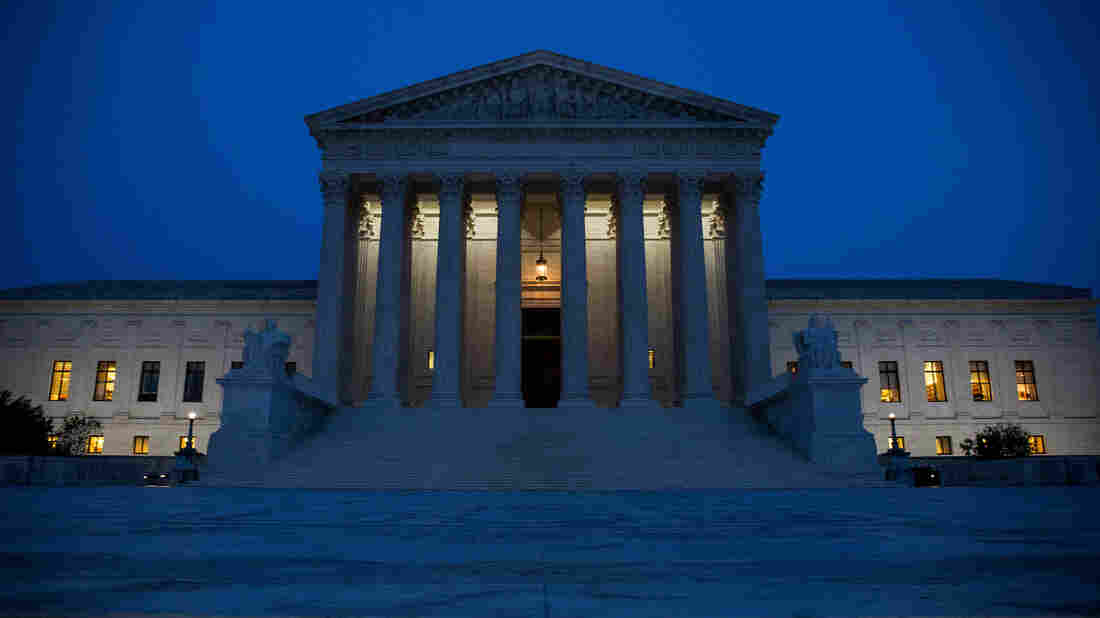 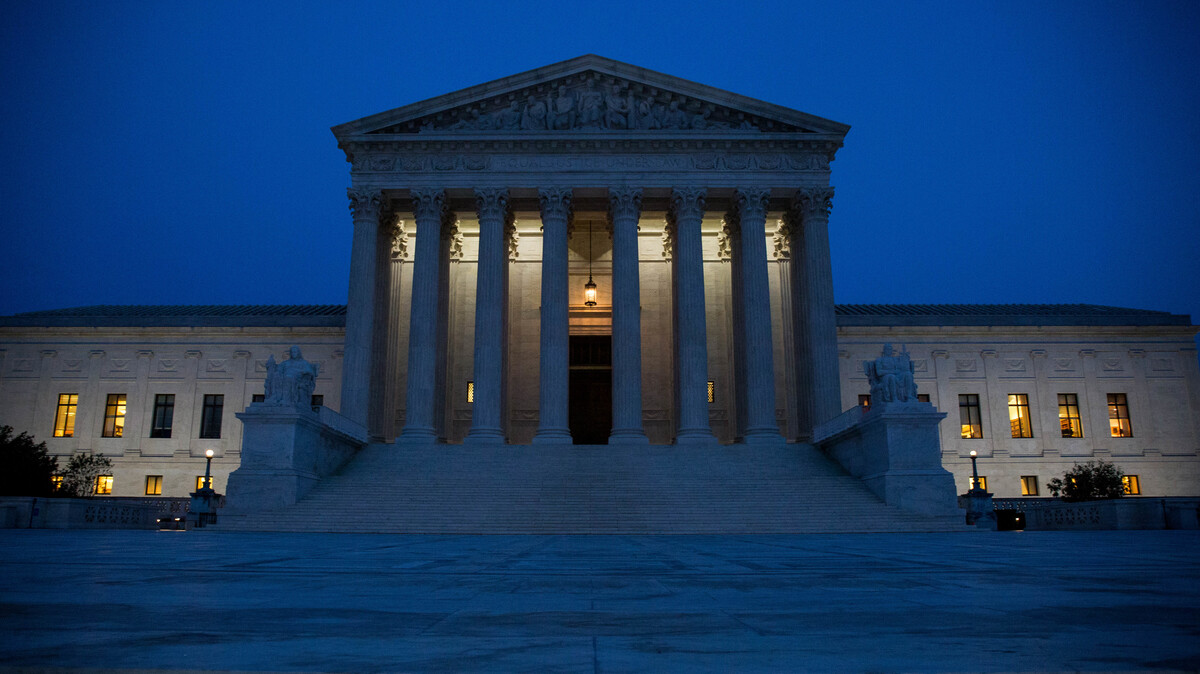 The Supreme Court, pictured on election night. Republican President-elect Donald Trump now stands to reshape the court in his image, potentially for a generation.

On Jan. 20, 2016, exactly a year before a new president would be sworn into office, Supreme Court Justice Antonin Scalia announced the court's 8-to-1 decision reinstating the death penalty for two Kansas brothers.

It was the last time the 79-year-old Scalia would announce an opinion. Three weeks later, on a hunting trip in Texas, the conservative icon died in his sleep.

Since then, the year has been one long roller-coaster ride for the Supreme Court, with the eight remaining justices putting off the most controversial cases while President Obama and the U.S. Senate struggled over filling the vacancy. 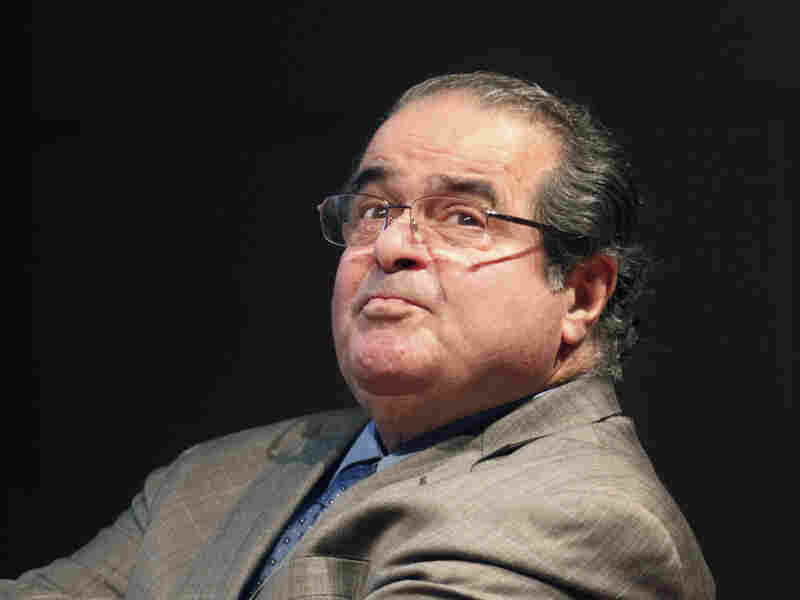 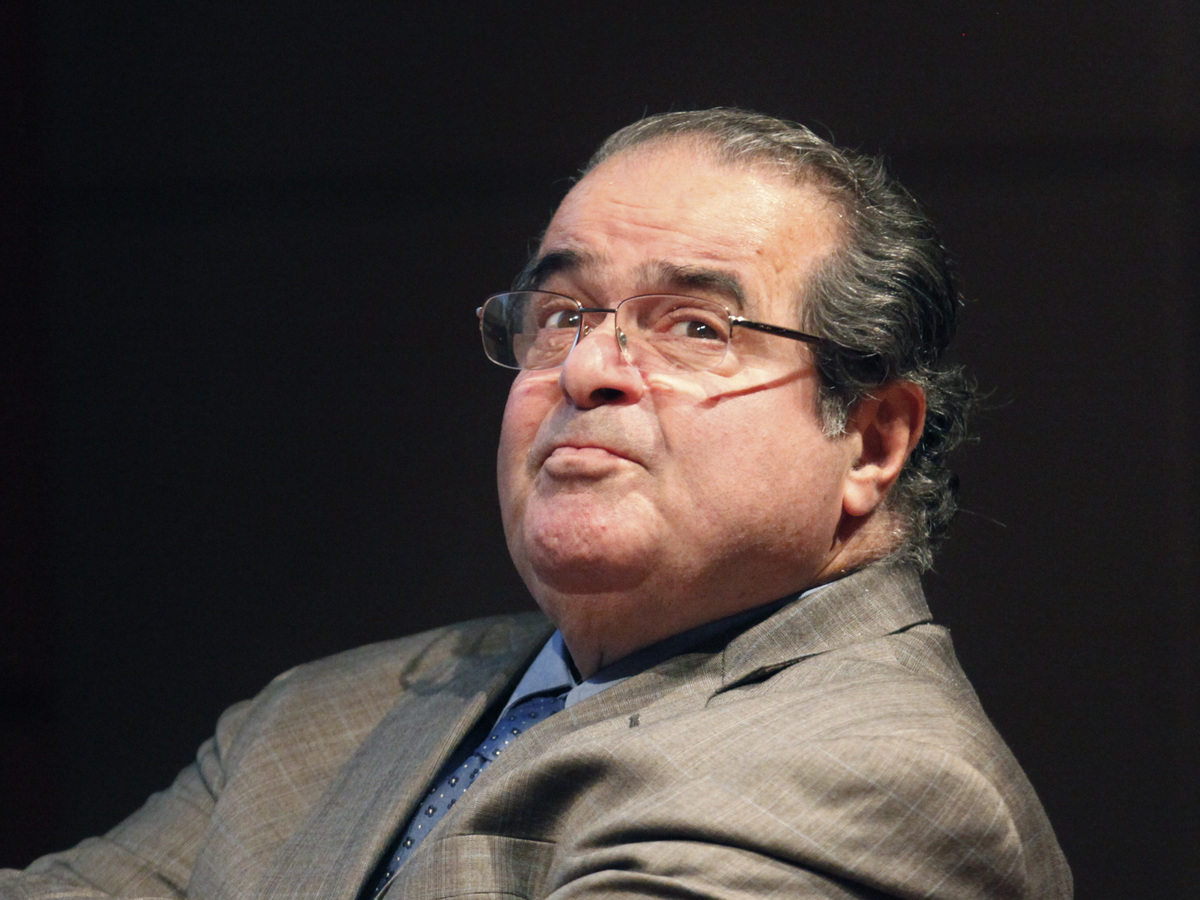 Republicans were shocked and horrified at Scalia's death. Not only was he a revered figure in the conservative community, but he was the fifth conservative vote on a court that was often split along liberal-conservative lines.

What's more, though, it was an election year. There was plenty of time to confirm a replacement, and no precedent for stalling for nearly a year to stave off that possibility. If Obama could fill the slot, it would mean that for the first time in a half-century, a majority of the justices would be Democratic appointees.

Within hours of Scalia's death, however, Senate Republican leader Mitch McConnell vowed to block consideration of anyone Obama would nominate to the court. The choice, McConnell said, should be made by the next president, after the election, to "give the people a voice in filling this vacancy."

Obama tried to finesse an appointment, picking as his nominee a relative centrist, a man Republicans had urged him to appoint when there were earlier vacancies: Merrick Garland, the chief judge of the U.S. Court of Appeals for the District of Columbia, and a man beloved and respected by his colleagues on both the right and the left. 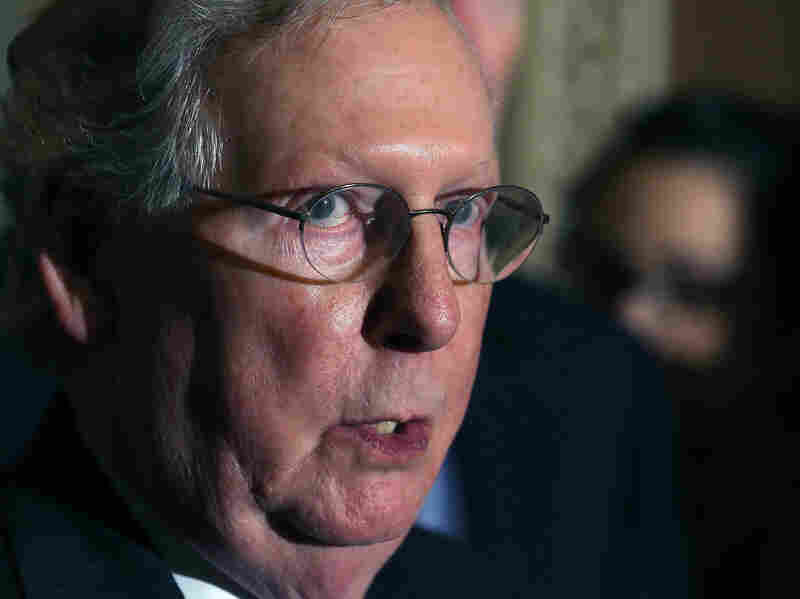 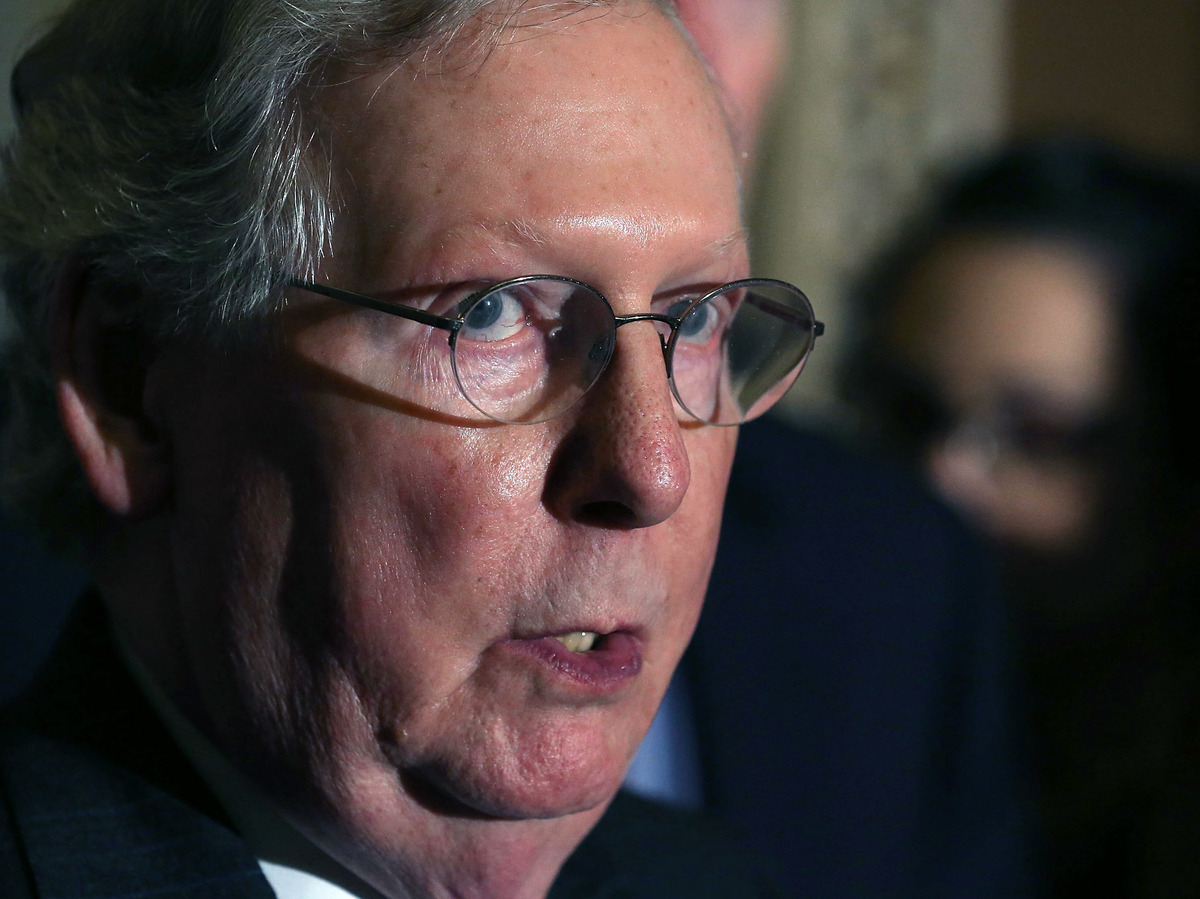 Senate leader Mitch McConnell speaks to the media Feb. 23, 10 days after Justice Scalia's death. He said GOP leadership would deny confirmation hearings for any Obama nominee to fill the vacancy.

But McConnell didn't budge. His position was so unprecedented that many Republicans, in addition to Democrats, thought the GOP would pay a price at the polls for such obstructionism.

The ploy, however, turned out to be ingenious. Twisting arms and making quiet threats, McConnell managed to keep his own Senate troops in line.

Meanwhile, candidate Donald Trump was catering to the socially conservative base of the Republican Party by promising to name a Scalia-like conservative to the court. And while Hillary Clinton rarely mentioned the court on the campaign trail, Trump drove the issue home relentlessly day after day.

"You have no choice," he told conservatives. "You got to go for Trump."

To allay their fears further, Trump released a list of 21 potential Supreme Court nominees, largely compiled by the conservative Heritage Foundation. Moreover, in the aftermath of the election, Trump said what he had not before — he would fill the Scalia vacancy with someone from that list.

Among the 21, the odds-on favorite is federal appeals court Judge William Pryor of Alabama, mainly because Trump's attorney general designate, Jeff Sessions, is also from Alabama and has considerable influence with the president-elect.

Judge Pryor is an outspoken critic of Supreme Court decisions on abortion, gay rights and the so-called Miranda warning. But when he was Alabama's attorney general, he won points among many for his role in removing the state's chief justice for refusing to obey a federal court order to take a Ten Commandments monument out of the courthouse.

Also believed to be at the top of the short list is Judge Diane Sykes, a federal appeals court judge from Wisconsin, with a bedrock conservative record. She authored an opinion expanding the rights of employers to limit their workers' access to contraceptives on religious grounds. She wrote an opinion striking down Chicago's law banning firing ranges within city limits. And she wrote an opinion mandating state subsidies for anti-gay religious groups on college campuses, a position the Supreme Court subsequently reversed.

Also believed to be on the Trump short list are other serious conservative judges from the federal appeals courts. Among them: Raymond Kethledge of Michigan, who ordered the IRS to turn over a list of conservative groups it had targeted for examination; Judge Thomas Hardiman of Pennsylvania, who dissented when his court upheld a New Jersey law that required citizens to show a "demonstrated" need for carrying a gun in public; Judge Raymond Gruender of Missouri, who wrote a decision upholding state-mandated suicide warnings before abortions; and Judge Steven Colloton, who is known for a number of decisions reversing major verdicts that favored whistleblowers and consumers.

Judge Colloton has a particular plus; he is from Iowa, the home state of the chairman of the Senate Judiciary Committee, Republican Charles Grassley.

Many of these potential nominees are said to have sympathetic personal stories. Judge Sykes, for instance, raised two children as a single mother after her divorce. Judge Gruender, the son of a janitor, had a childhood touched by family violence. In 1986, when he was a law student, his father pointed a gun at him, his sister and a younger brother. Gruender and his sister were shot, but Gruender was able to knock his father to the floor, saving his 12-year-old brother, according to local news reports.

There are other names on the Trump list, and as we have seen with other high-profile slots, Trump is more than willing to change his mind.

But with Trump and his team now pushing to name and confirm his Cabinet, settling on a Supreme Court nominee is not immediately on the front burner. It likely will happen after the new president is sworn in.

An announcement is expected in January or early February, with confirmation hearings sometime in March and, unless there are unforeseen difficulties, a vote by the full Senate sometime in April. Even if the Senate is able to meet that schedule, however, the Supreme Court term will almost be over, with just six days of oral arguments left on the schedule in late April.

Just what approach the Democrats will take would seem to depend on who is nominated for the vacant Scalia seat, and what is learned about the nominee and his or her record. The Democrats could filibuster, but anything more than a token talkathon is likely to provoke Republicans into changing the rules and abolishing the filibuster as it applies to Supreme Court confirmations.

Some Republicans would prefer not to do that, but if it proves necessary, GOP leader McConnell will likely make the move, just as Democrats would have done if they had won the presidency and the Senate.