Accessibility links
How The Donald Trump Cabinet Stacks Up, In 3 Charts Trump's Cabinet is less academic, less government-centric, and less diverse than those of his predecessors. 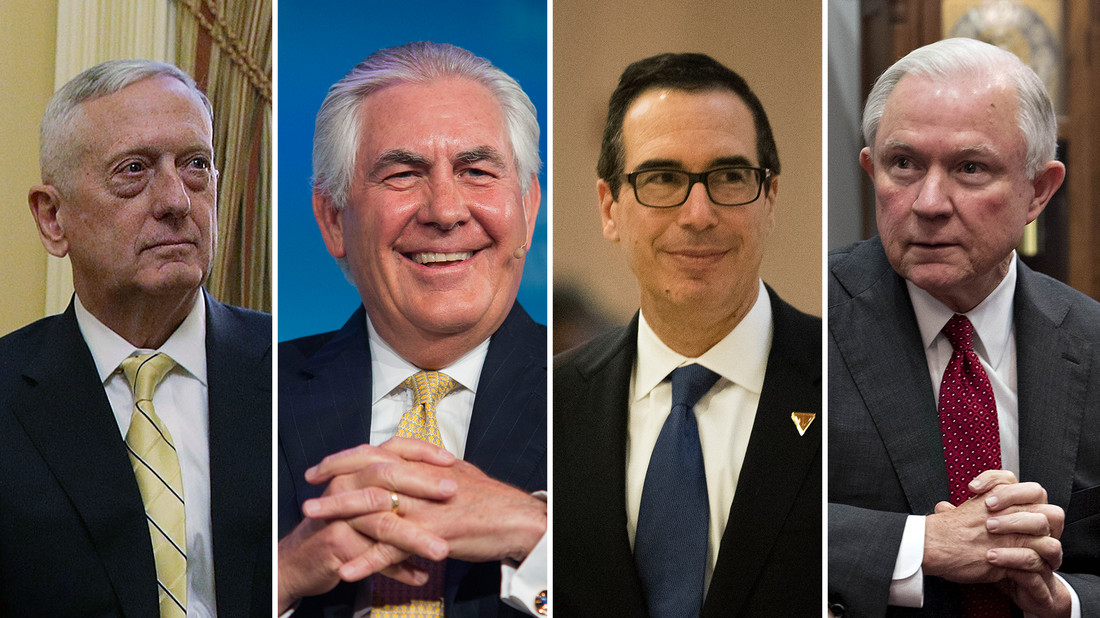 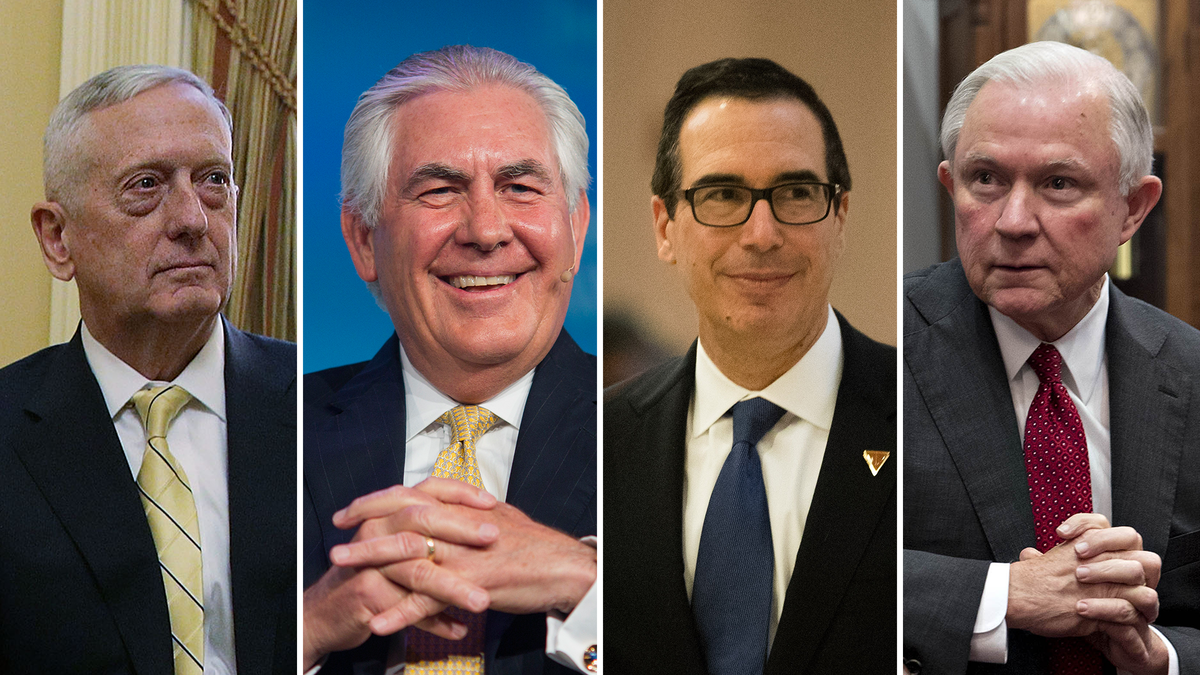 Update: This post was updated on February 16, 2017, and will continue to be updated as other appointments are made.

At a Thursday press conference, Donald Trump named one more person to his list of cabinet nominees: Alexander Acosta, dean of the Florida International University College of Law and former member of the National Labor Relations Board, is now nominated to head the Labor Department. He is taking the place of Andrew Puzder, who dropped out of the process this week in part due to questions about his past employment of person in the country illegally (including taxes paid in that instance) and personal life.

NPR is tracking Trump's Cabinet as it grows, counting up the diversity and experience of his appointees, as well as a few specifics they might have in their resumes.

So here's what Trump's Cabinet looks like by the numbers. Acosta's nomination means that 21 of 22 Cabinet-level positions (not counting the vice president) will have nominees — the CEA still doesn't have a nomination for its chairman. For the sake of apples-to-apples comparisons, we've compared all of those 22 posts across five presidents' initial Cabinets (for Trump we only count everything as a percentage of 21, as he has only chosen 21 people, and for Reagan and Clinton, we only count 21 appointees, as there was no Department of Homeland Security during their presidencies).

Trump's Cabinet breaks with a trend toward diversity

Of the 20 people he has chosen thus far, Trump's Cabinet has 15 white men. That's roughly in line with Ronald Reagan's initial Cabinet. However, it's also a swing away from a trend toward diversity over the last few presidents. President Obama's Cabinet in particular gained notice for its relative lack of white men.

To draw a line between white and nonwhite, we used Census Bureau race and ethnicity categories, though unlike the census, we counted all Hispanics as nonwhite (the Census Bureau counts Hispanic as an ethnicity and not a race, meaning a person can be white and Hispanic). Alexander Acosta is the first Latino appointee to the Trump cabinet.

The Census Bureau's system undersells diversity in some ways, though. For example, Obama Transportation Secretary Ray LaHood, George W. Bush Energy Secretary Spencer Abraham, and Clinton HHS Secretary Donna Shalala are all Arab-American. In the census, that counts as white, though some Arab-Americans disagree (and the Census Bureau itself is considering adding that category).

Furthermore, it's not that the trend toward diversity has been as steady as the above chart seems to show; after all, these are just the presidents' first Cabinets. President Obama took some criticism for a less diverse circle of advisers in his second term.

Diversity can mean bringing different perspectives to the administration. Of course, white men can be empathetic and open-minded, as National Urban League head Marc Morial recently told PBS NewsHour, but many Americans also look to the Cabinet as a sign of whether they are well-represented.

"The question is, do people feel their voices are heard? That's really important, that communities feel someone is at the table with my point of view," he said.

Trump has chosen the outsider Cabinet

Of course, there are other types of diversity — geographic, socioeconomic and experience, for example. And while Trump's team has been criticized for its economic profile (i.e., it includes multiple billionaires), it does break with usual Cabinet norms by being relatively light on established government figures.

We've attempted to quantify this by classifying each Cabinet member by his or her most prominent jobs prior to joining the Cabinet (for example, Colin Powell had spent much of his working life in the military before joining George W. Bush's Cabinet).

This required more than a few judgment calls — Glenn Hubbard (George W. Bush's CEA chair) had spent two years at the Treasury, but we decided he was primarily an academic, as he spent many more years in that field. Some of these are arguable: Was Hillary Clinton's career more prominently in "government" — that is, her time as senator — or as a first lady (which we'd classify as "other," a category that includes people who are in politics but are not officeholders, like Reince Priebus)? We made her one of the few listed as more than one, as she straddles the line between the two worlds.

Here we can see not only whose Cabinets were particularly heavy with people from the public sector (Obama) or the business world (Reagan, Trump), but also where different presidents have broken with tradition.

Trump, like most of the last five presidents, will have someone from the business world heading the Small Business Administration. However, he will be the only president out of these to have a defense secretary (Mattis) with a chiefly military background. True, Donald Rumsfeld had been in the military, but afterward he made a career of working in government, while Mattis remained in the military through retirement.

For a more holistic count of these Cabinet secretaries' careers, here is a breakdown of four different distinctions that Cabinet secretaries commonly hold. We counted up the initial Cabinet members who have had any experience in the military or government (at any level, from city to federal), as well as those who have served as CEOs or have earned Ph.D.'s. (This means these numbers will differ from those in the above table. Someone known best for government service may also have served in the military or have a Ph.D. or have been a CEO, for example — or even all four.)

Once again, there were some judgment calls — does serving as the "CEO" of Chicago Public Schools — as Obama Education Secretary Arne Duncan did — really count as being a CEO? (We decided no; we're trying to count a type of business experience here, and public schools are a government entity. A similar but tougher call went into deciding that Timothy Geithner's time as New York Fed CEO didn't count either.)

One other judgment call: we drew the line at Ph.D.s and excluded professional degrees, meaning that someone like Ben Carson, who of course studied extensively to be a neurosurgeon, would not be counted. There is also some debate about whether someone holding a law degree (a J.D., or juris doctor) should be considered a "doctor." For simplicity's sake, we decided to draw our border at Ph.D.

This is not meant to imply that these are the only four ways someone might be qualified to serve as a Cabinet secretary. Rather, these are four ways of measuring what type of a Cabinet a president has. A Cabinet that's relatively heavy with academics (Obama, Clinton) might work and think differently than does a Cabinet with more CEOs (Trump, George W. Bush).