Accessibility links
Beyond Fake News: 2016's Most Disruptive Media Moments This year was the most chaotic year America's mainstream news media have faced in a long time — and not just because of the presidential election, or the prevalence of fake news stories. 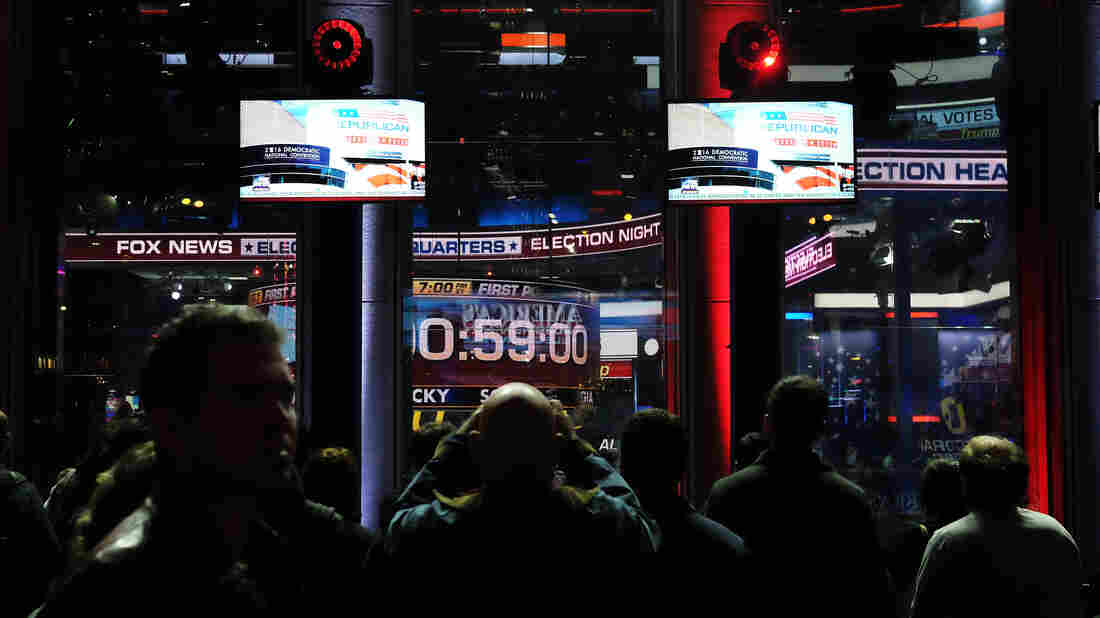 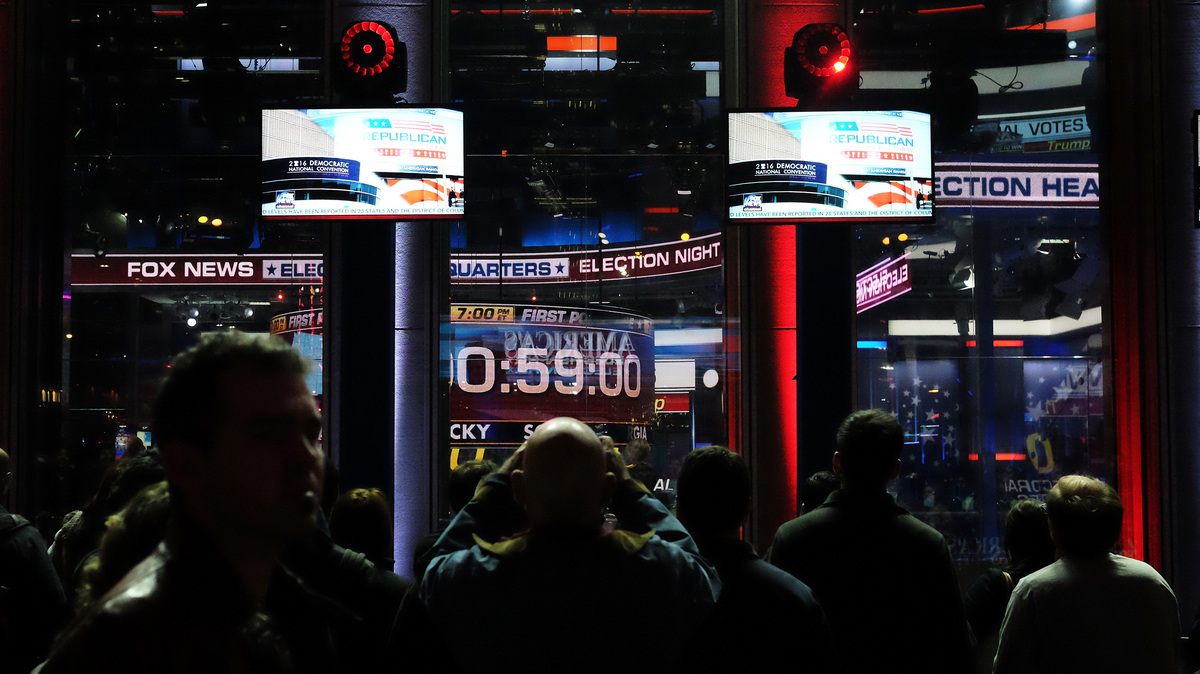 Here's the biggest understatement of the year: 2016 was the most disruptive moment the mainstream American news media have faced in a very long time.

That's not because so many media outlets misread the presidential election, although that is part of it. And it's not just because so-called "fake news" has become a genuine issue, prompting Facebook and other social media outlets to address fraudulent items formatted to look like legitimate news reports — a long-needed change.

It's because a number of disturbing trends eating away at the effectiveness of modern news media came to a head in this year's election. And — in a response that seems strikingly similar to how news outlets struggled with early disruption from the Internet — mainstream news outlets still don't appear to be responding very effectively.

This year, there's a single moment with many implications. The election of Donald Trump as president is my top media moment in 2016, of course.

Each year, I pull together a list of moments that most affected media over the previous 12 months, looking at events like the rise of viral videos capturing police shootings or the staggering fall of NBC News anchor Brian Williams. This year, there's a single moment with many implications.

The election of Donald Trump as president is my top media moment in 2016, of course. And the list of reasons why his campaign and victory matters for media also highlights the challenges at the very core of how journalism operates in America.

Gallup revealed in September that trust in news media had sunk to its lowest levels in their history of polling on this question. Just 32 percent of those polled said they had a great deal or a fair amount of trust in the news media "to report the news accurately and fairly." That's down from 40 percent last year, 50 percent in 2005 and 72 percent in 1976, when investigative journalism was still on a pedestal following the Watergate scandal.

Bad as those numbers are, they are worse among those who identify as Republicans. The September Gallup report found just 14 percent of Republicans polled expressed trust in media, down from 32 percent last year. "This is easily the lowest confidence among Republicans in 20 years," the report said.

This polling ties into an analysis the Pew Research Center presented in 2014, which suggests people who identify as consistent conservatives consume news differently from those who say they're consistent liberals. Consistent conservatives tended to cluster news consumption around one news source they trusted, with 47 percent of those polled citing Fox News Channel as their main source of news for government and politics. Consistent liberals were more likely to get their news from an array of trusted sources, including CNN (15 percent), The New York Times (10 percent) and NPR (13 percent).

Small wonder that political conservatives have built an alternative media structure focused on news and information which speaks more directly to the priorities, values and fears of their group. That structure includes TV outlets like Fox News, online outlets like Breitbart.com, Alex Jones' Infowars and The Daily Caller, radio hosts like Rush Limbaugh and Hugh Hewitt and authors like Ann Coulter. Liberal-friendly media outlets such as MSNBC and The Huffington Post also speak to liberal values, but I believe the news consumption patterns cited by Pew show that those audiences also consume news sources outside that circle regularly.

This means, as mainstream news outlets tried to break tough stories on Trump and Democratic challenger Hillary Clinton, they faced a news audience that included a significant number of people who distrusted their reporting. Some were consuming news on platforms that elevated that mistrust.

I think it's telling that the stories that seemed to hurt Trump the most during the campaign were stories largely based on an unfiltered presentation of what he said.

I think it's telling that the stories that seemed to hurt Trump the most during the campaign were stories largely based on an unfiltered presentation of what he said. In particular, video leaked from an old Access Hollywood tape featuring Trump talking crudely off camera about making sexual advances toward women, made a tremendous impact, in part, because it was his words presented to the audience without much analysis required.

Issue #2: Bias and Credibility. Critics have accused some mainstream media outlets of political bias favoring liberals, but I think the biases which most affect mainstream journalism are different. They include a bias toward being the first to report a story, particularly if it has a big public impact; a bias toward ratings and revenue; a bias toward celebrity, conflict and scandal. Any of these biases can cause big problems if left unchecked.

The attraction to conflict and desire to reach a divided audience brought some head-scratching decisions. CNN's decision to hire Trump's former campaign manager, Corey Lewandowski, even when it wasn't clear if he was still on the candidate's payroll or significantly involved with his campaign, was disappointing. The frequency of political arguments between partisans filling up time which could have been used for reporting on policy issues, particularly on cable TV, was also a mistake. Emails released by Wikileaks showing that Democratic party official Donna Brazile may have funneled advance information about questions from CNN's events to Clinton's campaign, showed the dangers inherent in hiring people who are active players in the election.

What has hurt mainstream media particularly is a mistrust that it can provide honest brokers — people who, even if they are political pundits expressing opinions, can be fair to all sides of an argument. In an environment where so much trust is already gone, moves by mainstream outlets that chip away at their status as honest brokers seem unwise.

But because interest in the election has also fueled a rise in news consumption — cable news channels in particular saw huge double-digit ratings increases from last year — news outlets haven't yet paid a significant price economically for any missteps.

Issue #3: Normalizing racism and sexism. Given that Trump's electoral success has emboldened some white nationalists and racists who endorsed him, news media outlets face the challenging task of reporting on these issues and groups without inadvertently helping them recruit more followers or make their racist views seem more acceptable.

NPR faced that challenge when interviewing Breitbart senior editor-at-large Joel Pollak about questions that the site has been a platform for the racist "alt right" movement. Pollak called the reporting and commentary on race and culture by our Code Switch team "racist" while also pushing back against questions about a Breitbart piece on the Confederate flag that denied the Confederacy was attempting to "enforce slavery."

Host Steve Inskeep did a great job asking fair questions of Pollak, but the issues at hand are so complex, as a listener I was thirsty for a longer, more detailed dialogue that more deeply probed these allegations. NPR media correspondent David Folkenflik delivered a story that offered that level of reporting and probing, which is very difficult to capture in a single interview.

Issue #4: Democratization of news through social media. The wonderful thing about social media outlets like Facebook and Twitter is that they can level the playing field and reduce the power of media gatekeepers. Anyone with an insightful observation or information about a newsworthy issue can reach the world directly.

But that democratization creates an environment that can also allow fake news to spread. Beyond that, this leveled playing field can also reduce the value of the experience and expertise of reporters, make opinions and facts look like the same thing and make ideologically skewed reports look equal to more objective reporting.

Facebook's development of a system to identify fake news is promising. But the fact that mainstream news organizations even have to deal with this remains disturbing.