Accessibility links
The Individualism And Fist-Pumping Of George Michael's 'Freedom '90' In the wake of the death of George Michael, we take a moment to appreciate "Freedom '90," not his biggest hit, but an irresistible mix of independence and vulnerability.

The Individualism And Fist-Pumping Of George Michael's 'Freedom '90' 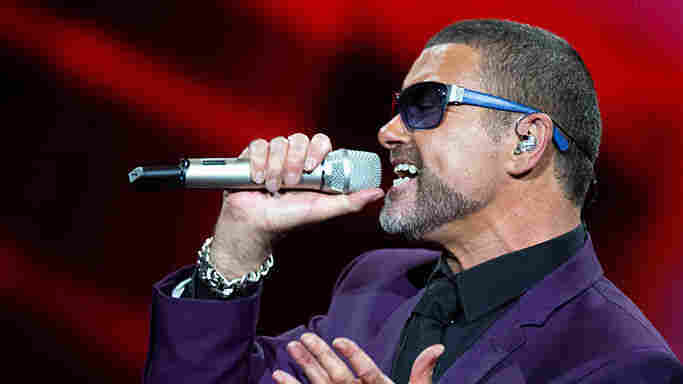 George Michael, seen here performing in September 2012, died this week. Among other things, the man could wear a suit. Samir Hussein/Redferns via Getty Images hide caption 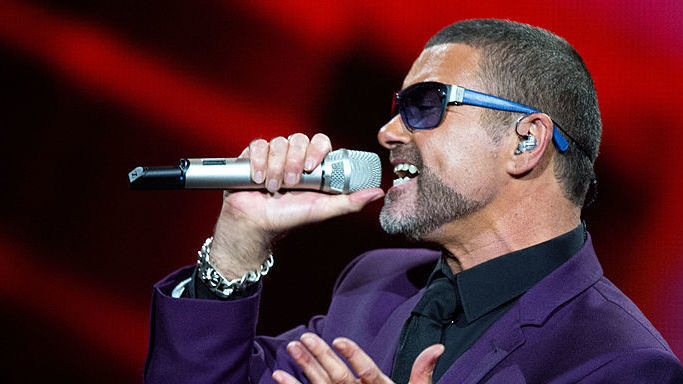 George Michael, seen here performing in September 2012, died this week. Among other things, the man could wear a suit.

If you took the '80s – by which I mean not necessarily the real '80s, but the cultural '80s, the popular idea of the '80s – and you put them over a low flame for many hours until only the essence remained, and then you took that essence and you painted it onto a piece of acetate and you held that acetate up to the light, what you would see is a single still frame of George Michael dancing in Wham!'s "Wake Me Up Before You Go-Go" video. His wavy, dark blond hair, his hoop earring, his white pants and white CHOOSE LIFE t-shirt – and his perfect, prominent, eternally flashing super-white teeth. Or maybe the other outfit: his salmon-colored sweatshirt, half-blue, half-white short shorts, and yellow fingerless gloves. (If you aren't familiar with it, I hear you say, "...Really?" And I say: "Exactly.")

Later, Michael would create other pop iconography – centering his cheekbones in the resolutely sultry "Careless Whisper" video, tapping his foot against a jukebox and shaking his ass in the "Faith" video, writing "MONOGAMY" in lipstick on a woman's back in the "I Want Your Sex" video.

"Faith," which had been a hit three years earlier, was already self-referential: the song begins with a pipe organ playing Wham!'s original "Freedom" before the percussive guitar busts it up, and the video starts with a snippet of "I Want Your Sex" even before that. So by the time George Michael blew up the "Faith" video's jukebox and burned its leather jacket when the chorus swelled in "Freedom '90," he was exploding not only his history but his past nods to it as well. And that, of course, begins with the song title, which borrows and bends the name of one of Wham!'s most '80s-flavored danceable confections. The original "Freedom," though, rejects what the singer calls "freedom" in favor of monogamy: "I don't want your freedom/I don't want to play around."

"Freedom '90" is famous for being the rare video of the time that didn't show its telegenic artist on screen, instead using a series of supermodels (including Christy Turlington, Cindy Crawford, Naomi Campbell, Linda Evangelista, and Tatjana Patitz) and some less-famous men to lip sync the words. The song is about a couple of kinds of freedom; the video – directed by David Fincher – existentially represents them.

People talked in the aftermath of George Michael's death on Sunday about the overt message of "Freedom '90," which chronicles his efforts to shift the direction of his solo career to the kind of music he really wanted to make, and the covert message, which it seems fair to assume was at least in part about remaining publicly closeted, which he did to some degree until an interview in 1998. (I commend to you Ira Madison III's very fine piece at MTV News about George Michael's impact on his thinking about sexuality.) It's not an either/or analysis, of course, given that asking artists to keep in shadow entire parts of their humanity affects both their art and their ability to derive satisfaction from it, so pressure to hide your sexuality and pressure to be a particular variety of pop musician can be braided tightly together. But whatever "Freedom '90"'s authorial intent was, what's sometimes lost in the legend of the fabulous "Freedom '90" video is that the song, in and of itself, is great.

It begins with just the beat, then the bass and keyboards, and the first appearance of a chant that will recur over and over: "I will not let you down/I will not give you up." It's a song of independence, but its first declaration is of mutuality: a promise and a vow, a sort of "I offer" and "I want" rhythm. Then: "Gotta have some faith in the sound/it's the one good thing that I've got." So there's "faith" wordplay, and there's the idea that artists are not just in business, even when they're pop musicians. Again, while it's declaring independence, it's also admitting vulnerability: part of the reason to preserve your artistic and personal sense of self goes well beyond principle – you do it because to do otherwise can make you desperate and lonely. Then a shift: "I will not let you down/so please don't give me up/'cause I would really really love to stick around."

"Please don't give me up." Please. Very often, you find a song of independence – of freedom – steeped in a kind of "I don't need anybody and I don't care what anybody thinks" autonomous flippancy, structured like a kiss-off. This is the opposite.

Meanwhile, that bass line is bonkers funky in places, and that syncopated keyboard part will get one of your shoulders popping almost imperceptibly up toward your ear, even if you think you don't dance. It's not only the lyrics that are speaking to something common in people. In fact, as the song moves through a few different sections, one of the few instrumental elements that stays constant is a tambourine shake, the most populist of pop noises.

The verses are simpler, major-key retellings of his early career, his successes, his confusion, and his remaking for the benefit of MTV. (It's not the only legendary video to include a name-check of MTV that is, at best, ambivalent.) Then George Michael begins to explain in earnest that he's changing direction – "there's something deep inside of me/there's someone else I've got to be" – and finds his way to a killer reference to both the problem of telling your personal truth and the specific story of his blue and white shorts: "I hope you'll understand/sometimes the clothes do not make the man."

When "Freedom '90" rolls into the chorus, it's with the same commitment to mutuality that showed up in the opening: "All we have to do now/is take these lies and make them true somehow." It would have been so easy for this song to be about his freedom, and to just say, "All I have to do now/is take these lies and make them true." But both the use of "we" and the trailing "somehow" – the latter is sung almost on a sigh – make it a song of commonality between a very famous pop star and the people who listen to him. (And, surprisingly, the supermodels who populate the video.) "Somehow" serves the same purpose as "please," which is to implore everyone else to search in the same way he's searching himself. And then: "All we have to see is that I don't belong to you, and you don't belong to me." Mutuality, but autonomy, too. "You got to give for what you take." Remember: "I will not let you down/I will not give you up." Give; take.

The song's debt to church music grows with the rising chorus of "freedom" interspersed with a quiet repeating of the opening lyric: "I will not give you up," and so forth. There's more; the song continues for six and a half propulsive minutes, and he's still introducing new thoughts as it fades out. "Lose the face now/I've got to live" are the last words you can hear.

The lyric salute to throwing off expectations and living your truth, as it were, is hardly new. "My Way" and "Don't Rain On My Parade" and "I Am What I Am" and "Corner Of The Sky" and "The Greatest Love Of All" and ... hell, half of every cabaret act and a good chunk of the Pink catalog come down to your right to be your special self. The lyric salute to fame being really, really difficult is perhaps an even more difficult pig on which to slather fresh lipstick.

Some of the performances that were shared the most after Michael's death were his covers of other artists' most stirring stadium ballads that plead for connection, particularly a performance of Queen's "Somebody To Love" and one of Elton John's "Don't Let The Sun Go Down On Me" — the latter of which he performed at Live Aid all the way back in 1985, when he was a far less self-assured artist. "Freedom '90," in a sense, mixes pleading and defiance — again, give and take.

It's a singalong, really. All we have to do ... all we have to see. And it's full of small good decisions, like the "yeah yeah" in the chorus that will reach inside your nervous system and make your head bob in a sassy manner. Ironically, the song is perhaps my favorite pop expression of the idea of interdependence – that we all cooperate in large and small ways to forgive and understand and therefore enable each other's individuality.

And it's such a jam. I dare you to listen to it in the car fewer than three times in a row.