Accessibility links
'Toni Erdmann': A Practical-Joking Dad And His Too-Practical Daughter Shadow of a Doubtfire: In this "silly yet profoundly moving" German-Austrian comedy, a father uses disguises, a false identity and a whoopie cushion to get his corporate-minded daughter to loosen up. 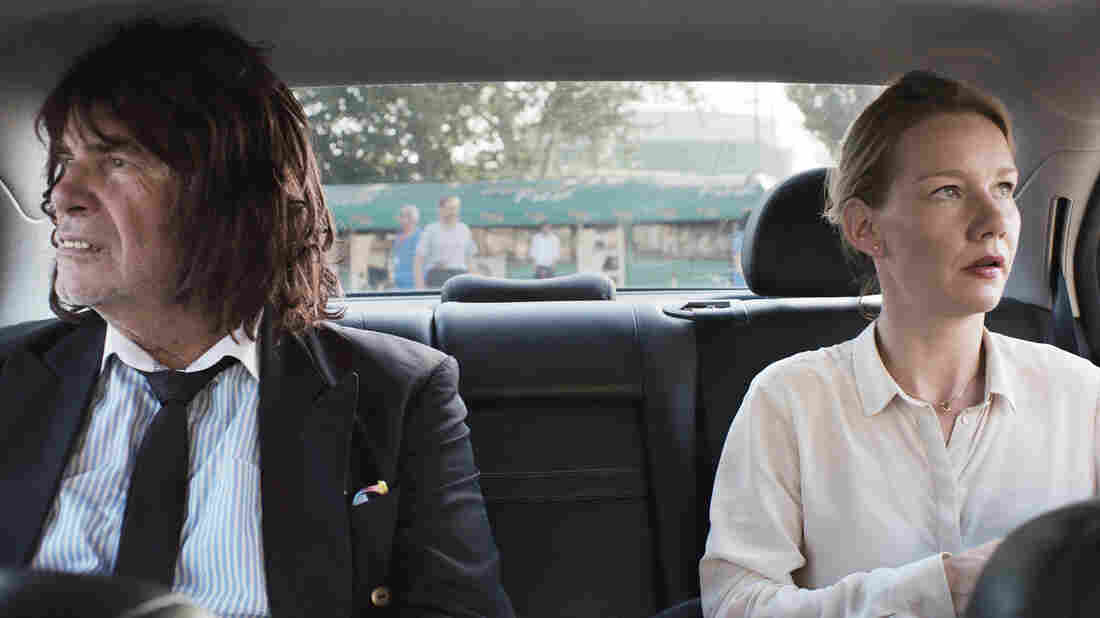 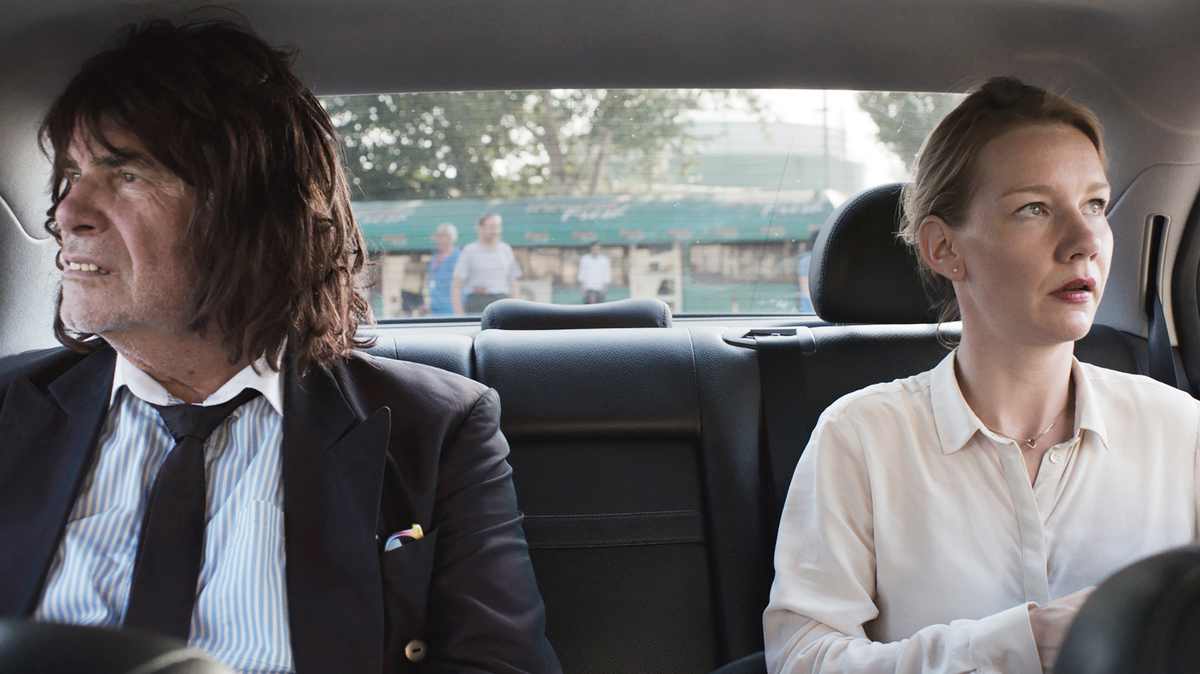 A Dad Joke is a funny thing. Well, not funny, exactly—that's the one thing a Dad Joke never is. Whether a dumb pun, a goofy accent, or a silly riff on a troubling event, this peculiar brand of attempted humor is passed on from a father to his offspring like family silverware. It exists to remind us that dads have a sacred duty to be silly and strange for their children's sake, to create a little shared universe of forced laughter and groans where both generations can retreat from the cold.

The remarkable new German-Austrian comedy Toni Erdmann is the Citizen Kane of Dad Jokes. Writer-director Maren Ade liberates these laffy-taffies into the world of high art. She builds her story around a father who will go to absurd, inscrutable lengths for a laugh, even though he rarely ever gets one. He makes liberal use of props, among them whoopee cushions, cheese graters, handcuffs, shaggy wigs, and one immortal set of giant false teeth, which he keeps in his shirt pocket and pops into his mouth at the slightest moment of tension. He will gladly wait half a day to spring a two-second "gotcha" gag. And over the film's nearly three-hour running time, he does battle with the humorless corporate world that has swallowed his daughter whole and is threatening to come for us all.

At the outset, it certainly seems like corporate is winning. When we first meet Winfried (Peter Simonischek), a retired music teacher, he lives alone with a pacemaker and a sickly dog, crafting elaborate fictions for a package courier just to amuse himself. He once was close with his daughter, Ines (Sandra Hüller), but she's all grown up and distant now, working for a consulting firm whose job is to tell companies they should lay off workers to save money. Ines does well, but she's miserable: constantly undermined by her male superiors, she resorts to drugs and empty sex to amuse herself, and disappears into her work so she doesn't have to think about how far she's drifted from her own soul.

Once his dog dies, Winfried makes a spontaneous visit to Ines's office in Bucharest, prattling on about the importance of fun and happiness in life. The weekend soon turns toxic, overtaken by Ines's work functions and her seeming inability to recall anything that makes her happy. "I know men your age with ambitions," she seethes at him. A saddened poppa takes his leave... but then out comes the wig and false teeth, and voilà, "Toni Erdmann" is showing up at her office and social gatherings with a different kind of ambition: to wreak havoc.

Toni is not here for your empty pleasantries. This "business consultant and life coach" barrels into rooms with the force of an ox, will ramble on for 30 minutes about turtles, and, perhaps because he is a man with absurd confidence, he'll be taken seriously every step of the way. Before Ines can blink, she finds herself playing along with Toni's games, roping him into elaborate business plans and dragging the pair to one-up each other with each new absurdity, be it a spontaneous burst of song or the most scandalous birthday brunch of all time.

The setup plays like a descendent of American comedies — think Mrs. Doubtfire crossed with the anarchic spirit of Andy Kaufman (whom Ade has credited as an influence). But the execution is far more emotionally textured, an example of an offspring learning the right lessons from its parents. The first time you watch Toni Erdmann, you see the film from Ines's eyes: at first befuddled and angered by her dad's bizarre behavior, until she realizes it may be lifting her out of the darkness. (When she's forced to drag Toni to her client's oil field, she uses him as business leverage.) If you're ever fortunate enough to watch the film a second time, you'll see it equally as Winfried's story: a final, desperate act of love, with an undercurrent of selfishness and sabotage. And no matter which way you read it, the whoopee cushion will still be funny, obviously.

If this were merely "uptight young woman learns to loosen up," Toni Erdmann wouldn't feel so revolutionary. But the film takes its corporate setting seriously, and wields a savage critique of modern globalization culture and the way we sacrifice our shared humanity to survive in it. Sly, devastating shots reveal that Romania's business class has built itself on the backs of the poor. Searching for advice on how to get ahead at work, Ines is told to stop listening to other people. She's forced to leverage every social gathering for transactional benefit, while her client — a prosperous American oil CEO looking to "cut costs" — belittles her in public to avoid admitting he has to take her advice. In the face of such direct exposure to how the world really works, Toni's version of reality offers an escape hatch. Wouldn't it be nice, for once, to throw away ambitions and live inside a joke?

In her third film, Ade could not have constructed her story any finer. Every beat is calibrated, not only for the punchlines but also the long, awkward pauses that absorb Toni's extraterrestrial weirdness into the earth. But Ade's work would be for nothing without her two dueling leads. Simonischek is the showier role, always putting on two or three layers of performance: as the blustery Toni he often stumbles while improvising his web of lies, and is quick to backtrack with the constant refrain, "It's just a joke." Hüller, meanwhile, is a portrait of slow-burning tragedy, and her bitterness comes with a specific exhaustion at a lifetime being the butt of other people's jokes. There is one devastating scene in a club where Ines, slumped into a couch riding a line of cocaine, is essentially daring her father to look away from her lifestyle, even as she calls out subconsciously to him for help.

Toni Erdmann is silly yet profoundly moving, a movie that speaks to the human disconnect of our time. We are born into our parents, not our jobs, and yet in adulthood we essentially choose a new set of life lessons over the ones they instilled in us. Can the power of the Dad Joke help us rediscover our old, shared universe in time? "Don't lose the humor," Toni solemnly instructs at one point, to a Romanian stranger who doesn't speak his language. It's one of the only moments when he's completely serious.