Accessibility links
Brooklyn Police And The People They Serve Improvise 'Understanding' On Stage What happens when you put seven cops and seven civilians in a rehearsal room once a week for 10 weeks? The result is a free show called To Protect, Serve, and Understand at the Brooklyn Music School.

Listen · 8:13 8:13
Brooklyn Police And The People They Serve Improvise 'Understanding' On Stage 8:13 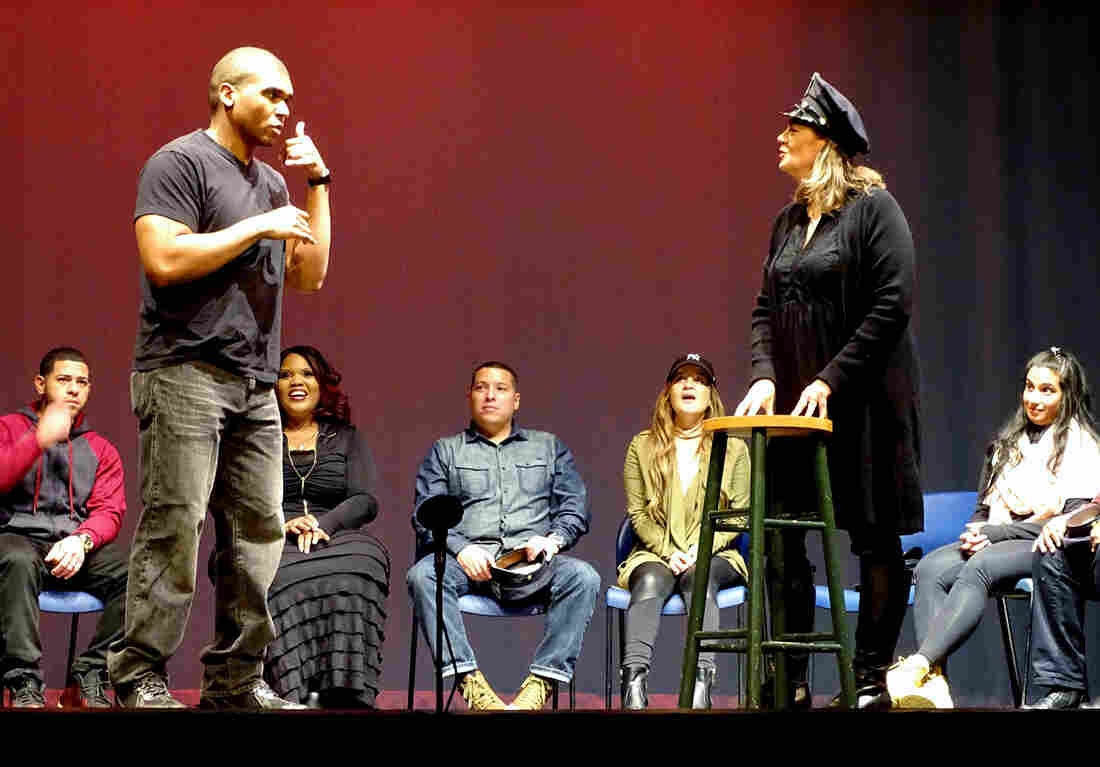 Starting in October, seven police officers and seven civilians got together once a week to get to know one another and do improvisational exercises. At the end of the 10-week journey they starred in To Protect, Serve, and Understand, a free show at the Brooklyn Music School. Above, Officer Desmond John, left, and Kathie Horejsi. Amanda Hinkle hide caption 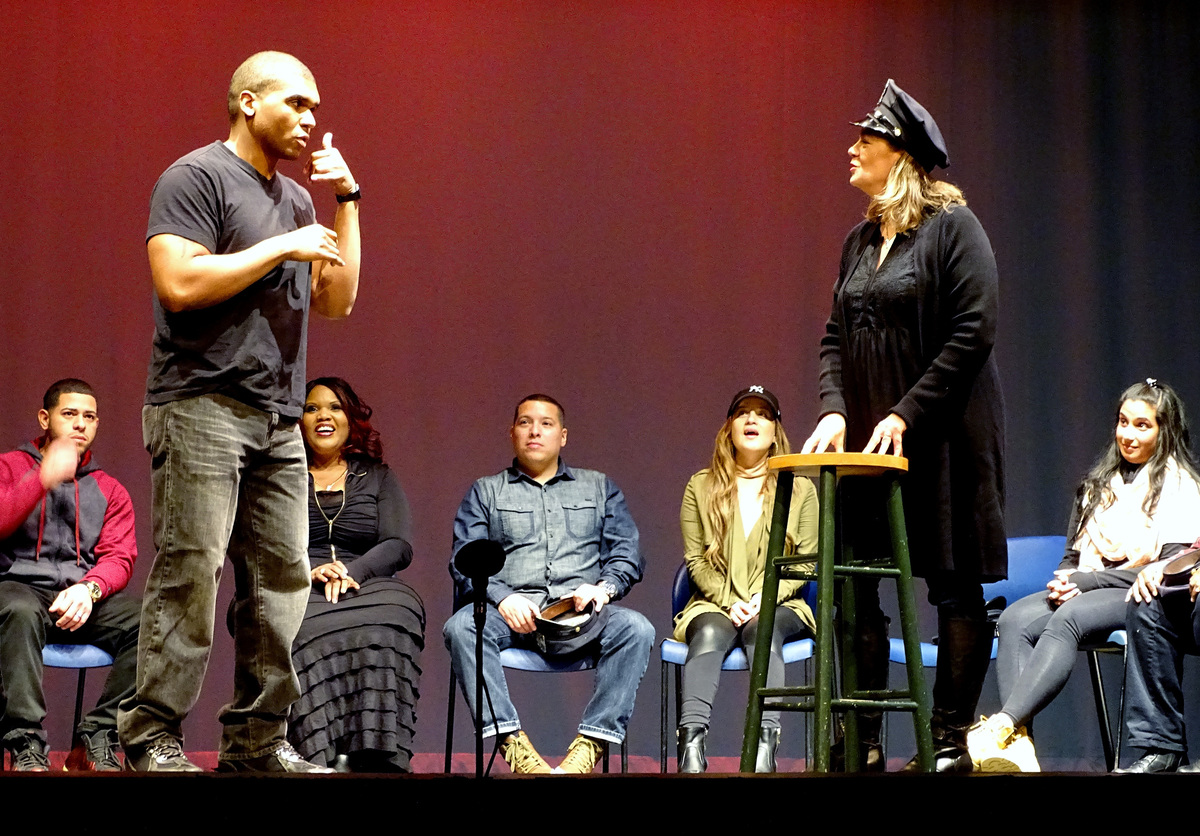 Starting in October, seven police officers and seven civilians got together once a week to get to know one another and do improvisational exercises. At the end of the 10-week journey they starred in To Protect, Serve, and Understand, a free show at the Brooklyn Music School. Above, Officer Desmond John, left, and Kathie Horejsi.

A theater company in Brooklyn, N.Y., recently decided to do a social experiment: Put seven cops and seven civilians in a rehearsal room once a week to really get to know one another. Then, after 10 weeks, ask them to put on a show.

The group first met on a recent fall evening in a rehearsal space at the top of a creaky flight of stairs at the Brooklyn Music School. Gathered around a big dinner table, everyone was in street clothes. After some awkward conversation over corn chowder, Terry Greiss, one of the founders of the Irondale Ensemble theater company, spoke to the group.

"Whatever happens in this room is going to reflect your concerns, your senses of humor, your quirkiness, your talents ..." he said. "This is a safe space."

That was the beginning of To Protect, Serve, and Understand, which grew out of nationwide tensions between police and communities of color. Using theater improv games, the goal is to get people who normally don't speak to one another — except in moments of extreme duress — to listen and understand.

Greiss and his associates led the 14 civilians and cops through improvisational exercises designed to break down defenses and work together.

It was only after two hours that Greiss had the participants sit down and talk about what he called "the elephant in the room" — distrust and anger between cops and the communities they serve.

"We're all human beings," says Wendell Dias of the Brooklyn's 73rd precinct. "We all have feelings, we all have emotions. We all have something we want to share, we want to communicate to someone else."

TS Hawkins, a Black Lives Matter activist and poet, replies: "It's easy, sometimes, I think, to sit and say we're all human beings, we all bleed red. But when you have a badge and I don't, that automatically means that your life is better than mine."

This is the sort of work the Irondale Ensemble does, in schools, prisons and shelters. Greiss came up with the idea for this workshop, after watching the video of Eric Garner's fatal, 2014 encounter with police officers in Staten Island.

"I kept seeing people not talking to each other, not looking at each other and the tragedy that evolved because of that," Greiss says. "So, in my anger about this, I wrote a letter to the police commissioner and I said: This is what we do and I think you need it."

Two days later, he got a call from police headquarters and the program started. Participants are recruited from flyers at precincts, e-mails and word-of-mouth. The group was mostly self-selecting — though some cops admitted their sergeants suggested they audition. Greiss and his colleagues put together a diverse group; black, white, brown, young, old.

"We wanted people who had strong opinions about what was going on in the world today," Greiss says.

For D.C.'s LGBT Community, A Police Liaison Who Can Relate

I showed up several times over the course of the workshop. Each time, I played games with the group and joined them for dinner. When I returned five weeks later, it was right after the election, and two things were clear: The group had bonded in many ways, becoming something of a theater company, and those strong opinions had become the center of the dinner table conversation — issues like institutional racism and patriarchy.

Officer Aliea Persaud patrols in the neighborhood. She says she found this workshop, at times, to be painful.

"I'm not gonna lie: There were, like, two classes back-to-back where we all just kind of looked at each other and we were like, What are we doing here?" says Persaud. "Like, I didn't come here to get attacked. You know? I didn't come here for people to tell me that, you know, I'm a killer, I'm a this, I'm a that. Like, we didn't sign up for that. But, I think as two or three classes go on, I think we're now getting back to the general idea of why we're here; to have fun, to understand, to figure each other out, figure things out. And do it while eating and laughing!" 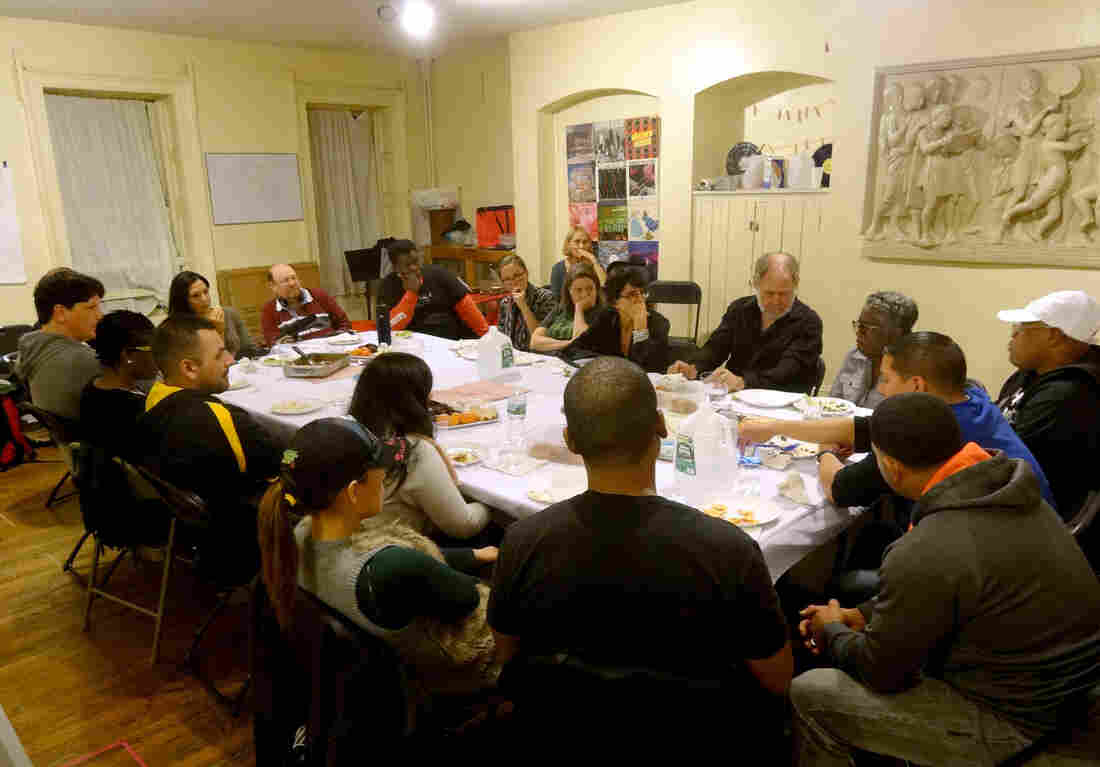 Every rehearsal and performance begins with a dinner. "Sitting down and having a hamburger together or eating macaroni and cheese together goes a long way to developing relationships ... " says Terry Greiss. "I was insistent that we start with a meal — and not with a meal from a restaurant ... it had to be a meal that was cooked by somebody who you could say thank you to at the end." Amanda Hinkle hide caption

That was the dynamic — moments of tension, followed by moments of genuine togetherness. As the December performances approached, the participants were given an assignment, to really walk in each other's shoes. The cops had to do a one-on-one interview with a civilian and the civilians had to interview a cop. And then, they had to create a short monologue, based on it.

Retired principal Cynthia Grayman-Pond interviewed Officer Chris Peguero of Brownsville's 73rd precinct — the precinct where her school was. Grayman-Pond knows many officers — she's even in a relationship with one — but she also has a 28 year-old son.

"That's the other flip side," she says. "He's a young black man, and that's the tension." She says, like many black parents, she's had "the talk" with her son about how to engage with the police.

Still, she can see both sides, so in her interview, she was able to draw Peguero out. He told her a story he hadn't told before, about a painful domestic call he and his partner answered. Two weeks later, Grayman-Pond became Officer Peguero on stage — telling the story of that disturbing call in front of an audience of 150 people, including cops and civilians.

The final show had its moments of humor, but some of the strongest moments came when the participants played themselves. In one scene, the participants respond to the question: "What are you afraid of?"

Serrina Goodman answers: "I'm afraid that a overzealous cop will take out one of my boys."

After the performance, there was lots of hugging and kissing, but activist and poet TS Hawkins insists this is not a Kumbaya moment.

"Yes, we're up here talking the talk and hopefully all the people on the stage too are walking the walk," she says. "But it's also for the people who are watching, that they're also taking the conversations that they've heard here and bringing it to their dinner tables."

Officer Desmond John of the 88th precinct says this workshop has changed the way he walks the walk on his beat.

"It's helping me to just be more cognizant of people and their emotions and their body language and their feelings," he says. "You know, you don't have to agree with everything that someone says or does, but just to understand them on a basic level and to respect them."

The Irondale Ensemble and the NYPD plan to do a new workshop this spring. And they hope to bring To Protect, Serve and Understand to other cities as well.