Accessibility links
'Lost Journalism' Revisits The Golden Age Of Ring Lardner Ron Rapoport, himself the recipient of the Ring Lardner Award for sportswriting, has collected the legendary columnist's work in a new book. Lardner wrote about sport, but also his family and travels. 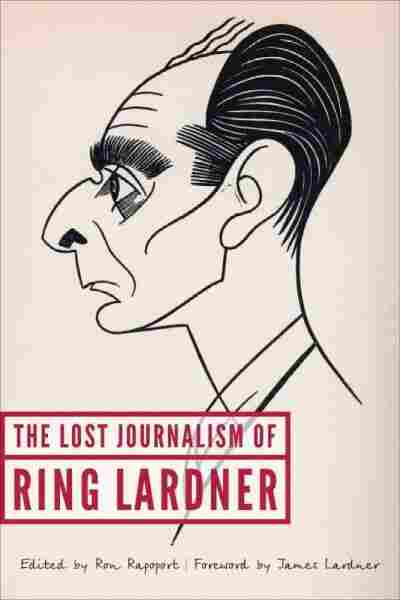 The Lost Journalism of Ring Lardner

How big was the writer Ring Lardner? He helped create what's still called The Golden Age of Sportswriters, the ones who wrote about The Babe, The Ironman, Dempsey, DiMaggio, and Joe Louis. And he went on to write short stories, novels, songs, and plays. He was an inspiration to Ernest Hemingway, who read his columns growing up outside Chicago, and later a favored writer of Maxwell Perkins and confidant of F. Scott Fitzgerald.

But a lot of the early journalism that made Lardner one of the most influential writers of the early 20th century disappeared over the years. His columns appeared in the South Bend Times, then the Chicago Tribune, in an old technology called newspapers.

Columnist Ron Rapoport, who won the Ring Lardner Award for excellence in sports journalism this year, has unearthed and collected some of those columns for a new book: The Lost Journalism Of Ring Lardner. He tells NPR's Scott Simon that, in a way, every sportswriter today can trace their lineage back to Lardner. "I heard the other day somebody say that he invented the column," Rapoport says. "Not necessarily the sports column ... his syndicated column ran in 150 papers, reached 8 million readers, and made him the single best read columnist of any stripe in the country."

What's interesting is that once he ... started writing these weekly columns, he left sports pretty much behind. He wrote about World War I, Prohibition, politics, his travels, his family, the craft of journalism. These were all for newspapers, as you point out, and they're the kind of thing that fascinated readers back then, but you don't see in papers or even online today, I don't think.

He just wrote so much about himself and his family, and his travels — he was always writing poems about his children, he wrote poems about when each of the boys were born. His wife insisted they name Ring Jr. after himself, so he writes, "When you are christened Ringworm, by humorists and wits/When people pun about you, till they drive you into fits/When funny folks say 'Ring, ring off!' until they make you ill/Remember that your poor old dad tried hard to name you Bill."

On F. Scott Fitzgerald's comment that writing about sports wasn't up to Lardner's gifts

Fitzgerald was ten years younger, and he greatly admired Ring. But you're right — he thought he wasn't stretching himself, was too content to stay within the confines of his short stories and his journalism. And Edmund Wilson, the great critic of the era, he agreed — comparing Ring to Mark Twain and wondering when he was going to write his Huckleberry Finn. But here's my view: You can't judge a writer by what he doesn't write. Lardner wrote what he wanted to write. And that's what he stayed with.