Accessibility links
Greenhouse Gas Regulations Of Methane May Be First To Be Repealed Scientists concede that oil and gas production is only partly to blame for the 3 percent surge in the greenhouse gas in the last decade. Obama tightened rules on the industry. Will Trump repeal them? 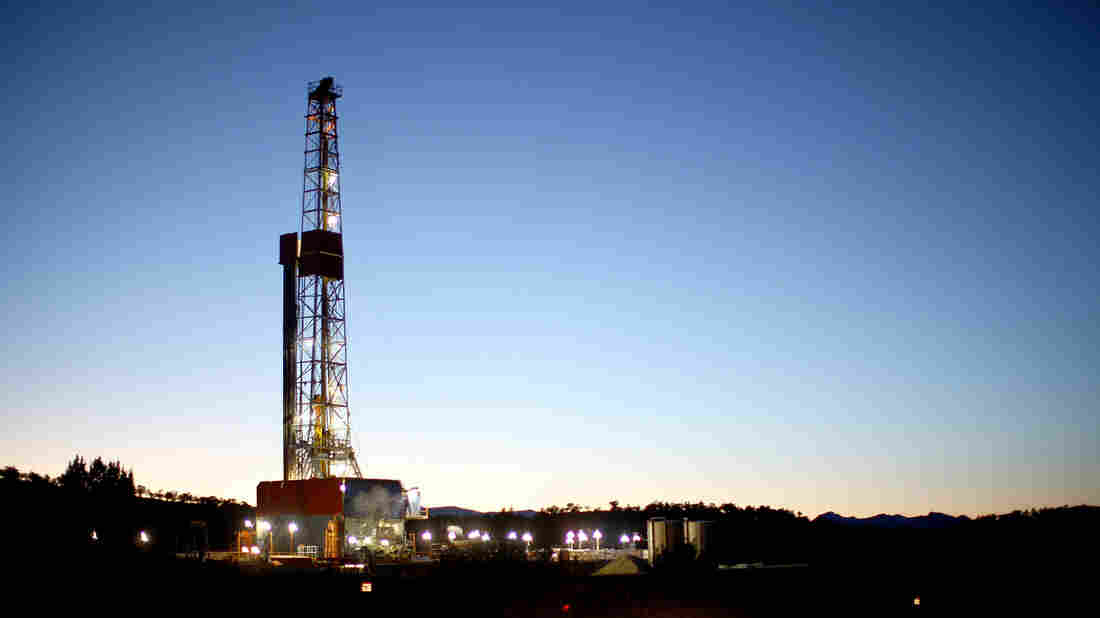 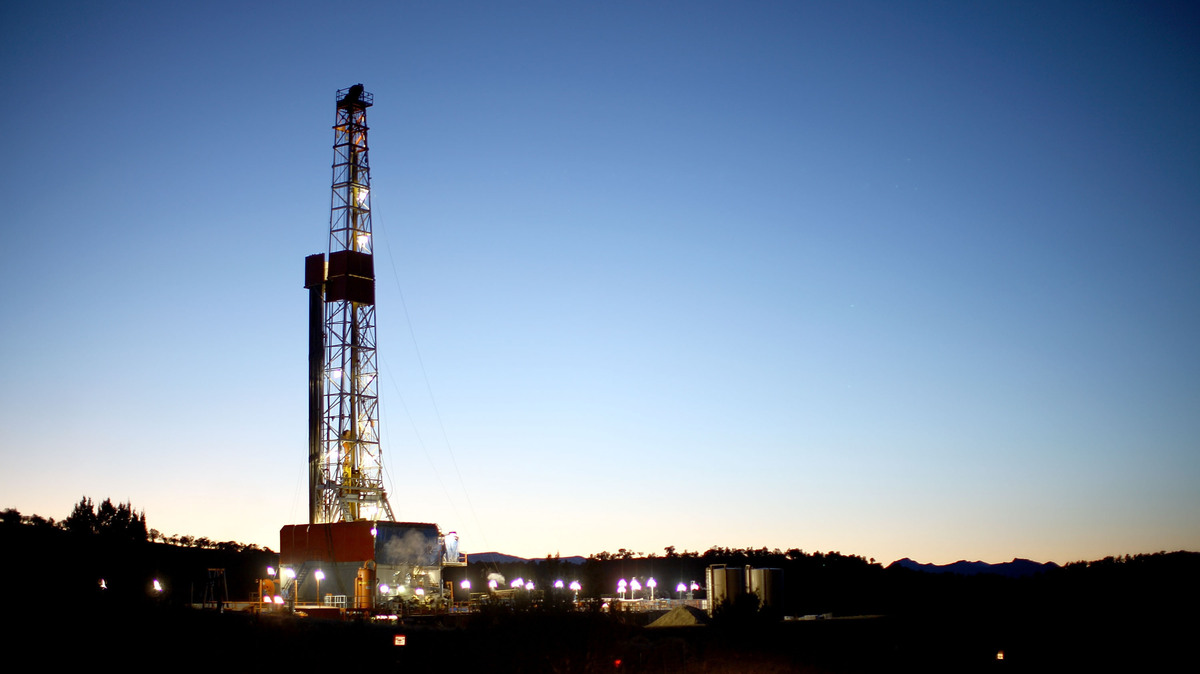 A natural gas drilling rig's lights shimmer in the evening light near Silt, Colo. Methane is the main component of natural gas, and studies show some methane escapes from leaky oil and gas operations.

There's more methane gas in the atmosphere than there used to be, by every scientific measure. The Obama administration has been trying to stem the increase of this powerful greenhouse gas, but the incoming Trump administration appears bent on keeping the government's hands off methane.

The gas comes from agriculture, especially flooded agricultural lands like rice fields, as well as from the digestive tracts of livestock. But it's also the main component of natural gas; some methane escapes from leaky oil and gas operations.

Whatever the source, scientists have found that, after many years of very little change, concentrations of methane in the atmosphere have increased by 3 percent over the past eight years.

"Methane concentrations in the atmosphere are surging faster than any time in the last 20 years," environmental scientist Rob Jackson, of Stanford University, told NPR.

Jackson and his colleagues have long tracked various sources of methane, as it emanates from oil and gas wells, city sewers and manure pits; he recently published scientific papers on global as well as local concentrations of the gas.

Other climate researchers have confirmed Jackson's findings, and point out that methane warms the atmosphere at about 30 times the rate carbon dioxide does. Jackson said the recent increase convinces him that methane deserves as much, if not more, immediate attention as carbon dioxide, the main contributor to greenhouse gas.

Scientists point to agriculture as the likeliest source of the new methane, especially in Asia and Africa. Feeding more people has meant more rice fields, more livestock and more manure — all sources of methane. There also is some evidence that small changes in the chemistry of the atmosphere may be allowing methane to stay aloft longer than usual, giving it more time to warm the air.

But Jackson noted that there are other sources. "We also see evidence for some increase from the fossil fuel sector," he said, meaning drilling, processing and the transporting of natural gas. Recent research shows that leaks from the natural gas supply chain are more widespread than previously thought.

The U.S. government is taking steps to stem that source of methane. The Environmental Protection Agency has written regulations to make companies plug methane leaks at new or modified oil and gas operations, and at the operations on some federal land.

But the oil and gas industry believes the government is overreaching.

That debate is likely to flare up when President-elect Donald Trump takes office. Trump has said that environmental regulations drive up the cost of doing business and kill jobs; his choice to head the EPA, Scott Pruitt, the attorney general of Oklahoma, has made similar claims that the agency has a history of overly regulating oil and gas companies.

Jack Gerard, who leads the American Petroleum Institute, told reporters in November that he wants the incoming Trump administration to dump the regulations.

"Methane (regulation) is a top priority, and we'll be pursuing that aggressively," Gerard said. Some oil and gas companies have already sued to stop the regulations, which aren't yet in effect.

"I think everybody understands that there needs to be methane regulation, and it's really a question of degree," Steve Leifer, an environmental lawyer at Baker Botts, a legal firm that represents oil and gas companies, told NPR. "I know the industry is very concerned. They are taking it very, very seriously."

Oil and gas representatives argue that the recent research shows that the biggest source of methane is agriculture, along with natural sources like wetlands.

That may be true, but Mark Brownstein, a lawyer with the Environmental Defense Fund, said he believes that's a red herring.

"I think the debate over what's caused the near-term rise has served to obscure the fact that emissions are already too high," Brownstein told NPR. You have to start somewhere, he said, and capturing leaked methane from oil and gas operations is easier than changing agriculture practices.

In fact, stopping methane leaks should make economic sense for the oil and gas sector, he said: Methane is a commodity, and leaked methane is money lost. Brownstein's organization, along with university researchers and natural gas companies, has studied how much gas is leaking.

So far, oil and gas interests haven't been convinced. Gerard points out that the industry is voluntarily reducing leaks and doesn't need federal enforcement.

Leifer, the attorney representing oil interests, told NPR the debate will likely end up in court, along with lots of other pending environmental regulations.

"There is no major rule that isn't going to go to court," he said. "You just can't find one." That shouldn't be surprising, he said. Every change of administration in Washington means more business for lawyers.