Accessibility links
Book Review: 'History Of Wolves,' By Emily Fridlund Emily Fridlund's electrifying debut novel History of Wolves is a contemporary coming-of-age story about a young woman — but it avoids the familiar story arc so common to other novels in that genre. 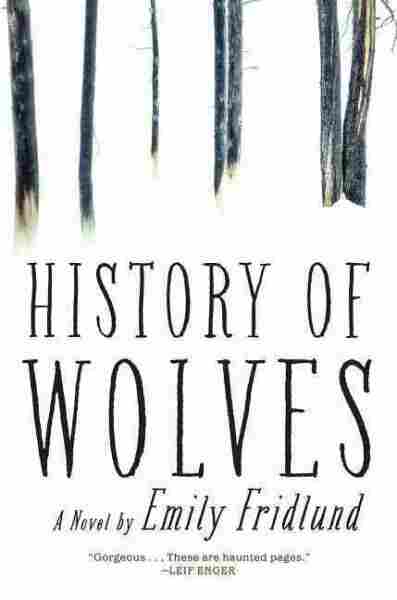 There's a reason that some readers view contemporary coming-of-age novels with suspicion. Too many play out the same way: An odd but winsome young person goes on some kind of journey of discovery, either literal or figurative, and learns something about himself or herself in the process. Often, there's an awkward romance. And the ending, whether happy or otherwise, can usually be described as bittersweet.

There are exceptions, of course, and Emily Fridlund's electrifying debut novel History of Wolves is one of them. The book doesn't follow the now-familiar narrative arc that other novels in the genre do. There's no moment of revelation at the end; if anything, the protagonist ends up more confused than she was at the beginning. Fridlund refuses to obey the conventions that her sometimes hidebound colleagues do, and her novel is so much the better for it.

History of Wolves follows a 14-year-old girl named Madeline, though nobody calls her that: "At school, I was called Linda, or Commie, or Freak." The unkind nicknames are the result of her upbringing on a northern Minnesota commune, long since abandoned by all of its idealistic residents, with the exception of her parents. To them, Linda is something of an enigma, overly serious, lacking the heedless playfulness of other children. "[My mother] wanted very badly for me to cavort and pretend, to prove I was unharmed, happy," Linda muses, but she finds herself unable to participate in the ruse.

Linda's year is changed by the arrival of a new history teacher, Mr. Grierson, the kind of adult desperate to be seen as cool by his adolescent charges. Linda makes a passing attempt to seduce him; later, he's arrested and accused of possessing child pornography and having sex with one of his students.

When a new family moves across the lake from the mostly abandoned commune, Linda sees a chance to distract herself from her unhappy home and school life. She develops a quick affection for Patra, a young woman who works editing her astronomer husband's manuscripts, and their four-year-old boy, Paul. The couple hires Linda to babysit Paul during the summer days.

Linda doesn't know quite what to make of Paul, or of children in general. "By their nature, it came to me, children were freaks," she thinks. "They believed impossible things to suit themselves, thought their fantasies were the center of the world. They were the best kinds of quacks, if that's what you wanted — pretenders who didn't know they were pretending at all."

Patra, Paul and Linda grow close, although Linda harbors misgivings about Leo, the quiet and mysterious father of the boy. It doesn't take long for Linda's doubts to be confirmed, when something terrible happens — it's out of the blue, and it leaves both Linda and the reader in shock.

History of Wolves isn't a typical thriller any more than it's a typical coming-of-age novel; Fridlund does a remarkable job transcending genres without sacrificing the suspense that builds steadily in the book. She's particularly effective using descriptions of nature to provide eerie foreshadowing: "You know how summer goes. You yearn for it and yearn for it, but there's always something wrong. ... The afternoons are so fat and long. You want to see if anything you do matters."

Perhaps the greatest accomplishment in the novel is Fridlund's portrayal of Linda, who the reader encounters not just as a teenager, but, in brief flash-forward scenes, as an adult still psychically wounded from the events of the summer. Sometimes people overcome the traumas they were subjected to as children; sometimes they don't. For most people, and for Linda, it's somewhere in between.

"Maybe there is a way to climb above everything, some special ladder or insight, some optical vantage point that allows a clear, unobstructed view of things," an adult Linda reflects. "But isn't that the crux of the problem? Wouldn't we all act differently if we were someone else?"

Looking in hindsight isn't any more accurate than trying to predict the future, of course; and neither really works out for Linda. But she's such an incredible character — both typical and special, sometimes capable of great love and sometimes spectacularly not — that it's hard to turn away from her sometimes horrifying story. History of Wolves is as beautiful and as icy as the Minnesota woods where it's set, and with her first book, Fridlund has already proven herself to be a singular talent.