Accessibility links
Atheists, Agnostics, Nonreligious Remain Far Underrepresented In Congress Only one member of Congress is religiously unaffiliated, but more than 1 in 5 Americans is. 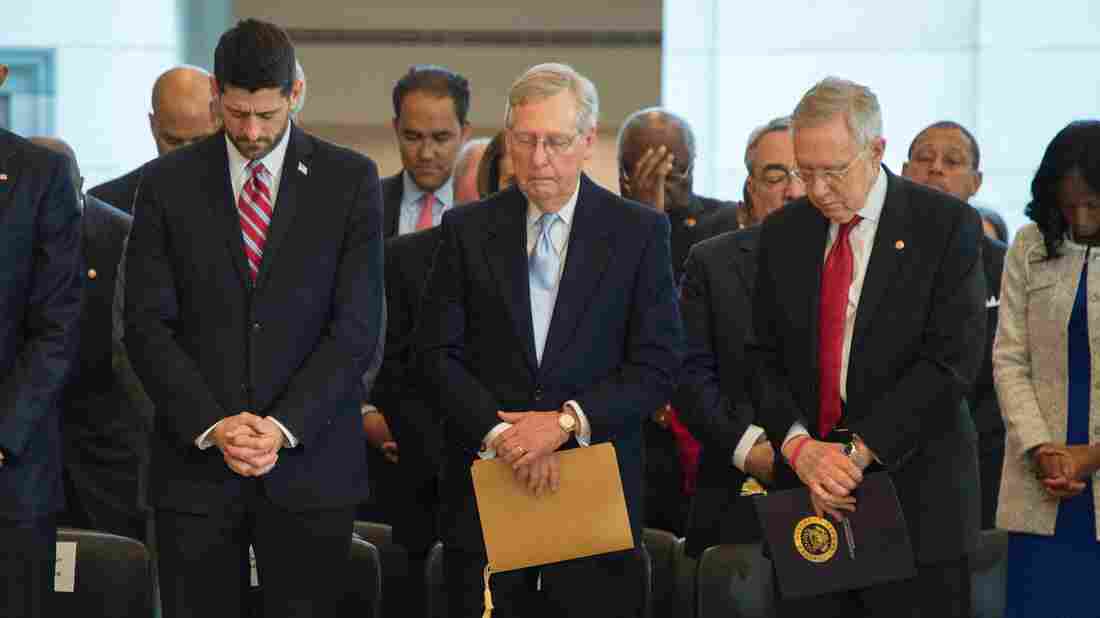 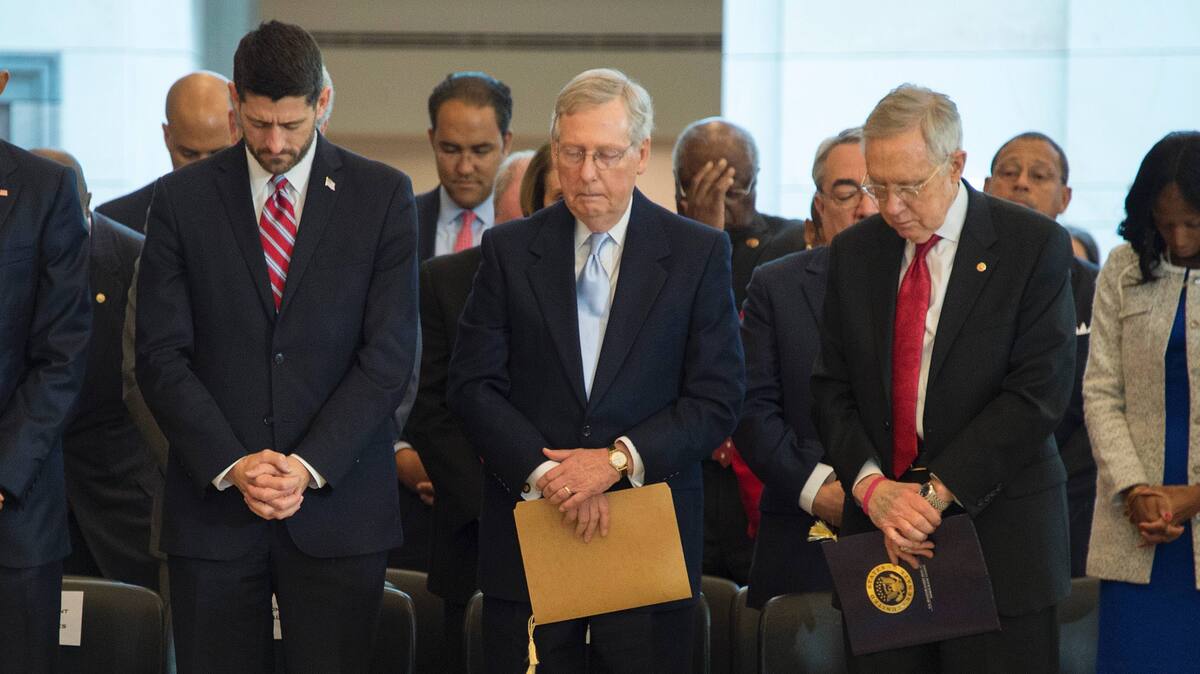 House Speaker Paul Ryan, Senate Majority Leader Mitch McConnell and Senate Minority Leader Harry Reid bow their heads in prayer in this 2015 photo. All three are Christians, as are more than 90 percent of congressional members.

One in five Americans is religiously unaffiliated. Yet just one of 535 members of the new Congress is.

That's what the latest data from the Pew Research Center show on the opening day of the 115th Congress. The nation's top legislative body remains far more male and white than the rest of the U.S. population as well, but religion is one of the more invisible areas where legislators in Washington simply aren't representative of the people they represent.

Only Arizona Democratic Rep. Kyrsten Sinema admits to being "unaffiliated," which Pew defines as people who are atheist, agnostic or who describe their religion as "nothing in particular." That means only 0.2 percent of Congress is unaffiliated, compared with 23 percent of U.S. adults. That group is faster-growing than any religious group in America, as Pew found in 2015.

Meanwhile, nearly 91 percent of congressional members are Christian, compared with 71 percent of U.S. adults. Here's a full breakdown of how Congress' religious affiliations compare with those of the U.S. population:

America's nonreligious are young — and not politically organized

Why the massive gap? For one, religiously unaffiliated people tend to be young, and Congress just isn't that young. In the 114th Congress, the average age for House members was 57 years old and for senators it was 61. (To a modest extent, this is a reflection of age rules: Senators must be 30 or older, and representatives have to be at least 25.)

But groups that identify as "nothing in particular," agnostic and atheist — the three groups that make up the unaffiliated in Pew's definition — are among the youngest "religious" groups in America. So it may be that once Americans start electing more millennials to Congress, there will be a greater share of nonreligious people elected as well.

In addition, younger Americans tend to have much lower voting rates than older people. That may also contribute, though the logic requires a couple of leaps — if this means the (relatively young) religiously unaffiliated population isn't voting as much, and if the religiously unaffiliated are more drawn to likewise unaffiliated politicians — that could also help explain the lack of "nones" in Congress. Likewise, the inverse is true: If older (and more religious) Americans are voting for more religious politicians, it means less room for the nonreligious ones.

(Perhaps unsurprisingly, the unaffiliated Sinema is also relatively young for a congressional member at 40.)

One more potential reason unaffiliated people aren't in power: Not being affiliated often also means not being politically cohesive.

"They may be unaffiliated; they may be atheist; they may be agnostic ... but they're not part of some club," said Margie Omero, a Democratic strategist at Purple Strategies, to NPR in 2015. "You could certainly argue that evangelicals are not monolithic in terms of their policy beliefs, but there's no denying that there's more of an organization around organized religion than there is around disorganized atheism."

Then again, it's very low compared with Jews and Mormons (and Christians in general, who have made up all of the presidents to date), and the numbers altogether suggest that America's nonreligious have a long way to go before they become mainstream as politicians. That 58 percent put atheists next to last on Gallup's list, above socialist (at 47 percent) and on par with Muslim (60 percent).

Not only that, but atheist is still far more of a minus than a plus for voters. According to one 2014 Pew poll, just over half of Americans said that knowing a presidential candidate was atheist would make them less likely to vote for that candidate; only 5 percent said "more likely" (the remaining 41 percent said it "wouldn't matter").

It's not exactly "nones" (atheists are only one subset of unaffiliated Americans), and it's a question about voting for president, but it at least sends a message: Being nonreligious is still not a big selling point for many voters.