Accessibility links
In Toledo, Syrian Refugees Are Welcomed Amid A Difficult Immigration Climate In a return visit to an Ohio community that's seen decades of immigration, NPR finds some refugees acclimating while others are warned they might hear "some scary things" said about them.

Listen · 7:49 7:49
In Toledo, Syrian Refugees Are Welcomed Amid A Difficult Immigration Climate 7:49 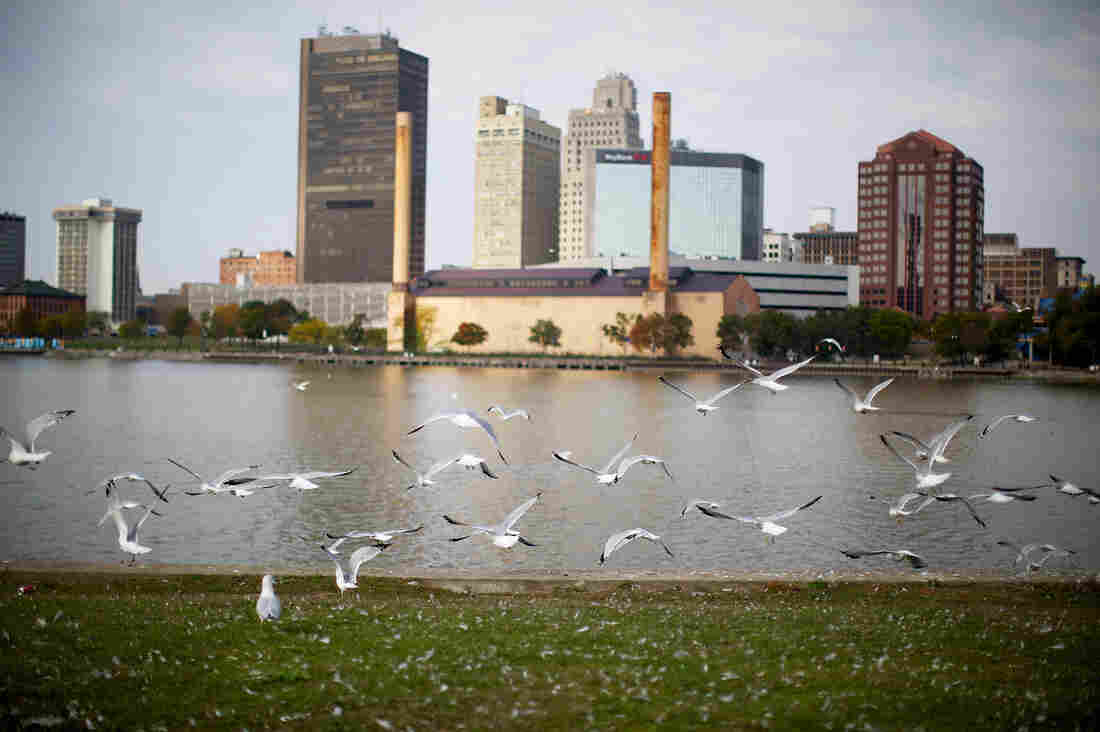 US Together, an organization that works to settle new refugees in Toledo, Ohio, helped 131 Syrian refugees from October 2015 through November 2016. David Gilkey/NPR hide caption 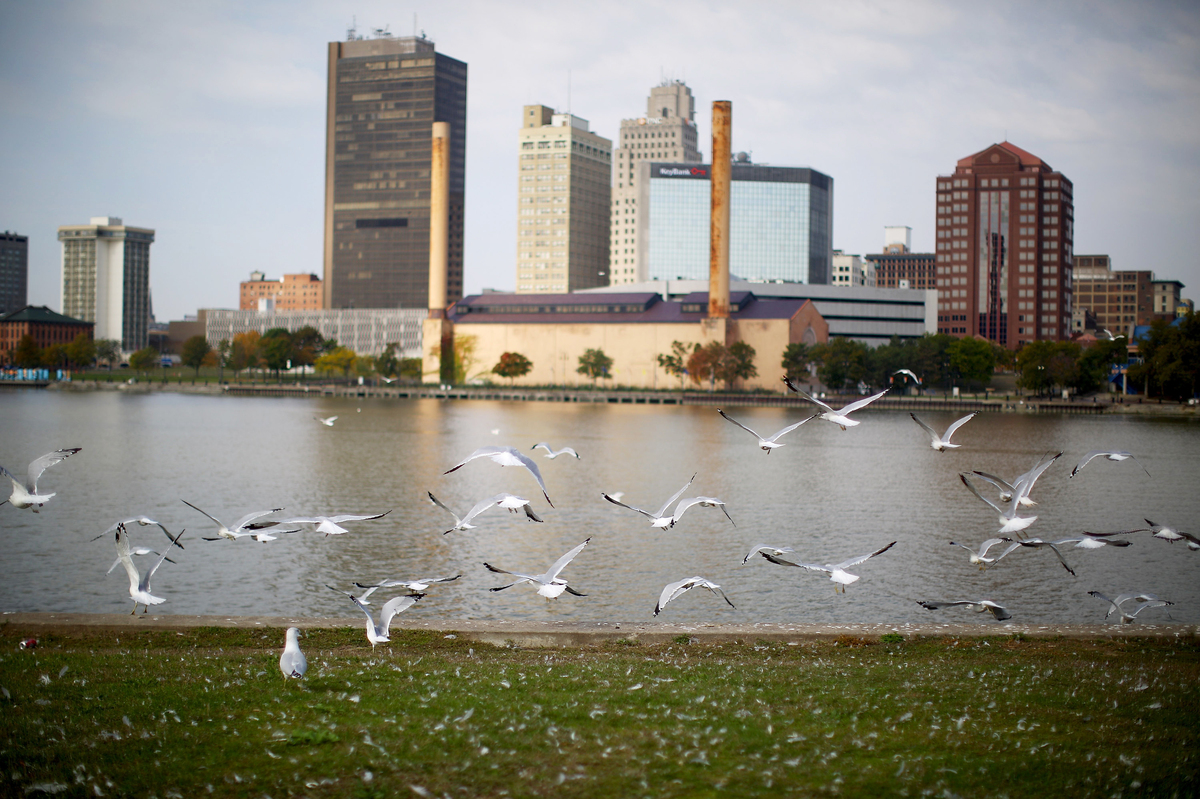 US Together, an organization that works to settle new refugees in Toledo, Ohio, helped 131 Syrian refugees from October 2015 through November 2016.

Last year, NPR's Ari Shapiro visited Toledo, Ohio, to talk to refugees settling there from Syria's civil war. Recently, he returned to Toledo to check in on the community.

When we first met Omar Al-Awad and his family in the fall of 2015, they were among the newest refugee families from Syria settling in to life in Toledo, Ohio.

Among The Lucky Few: Syrian Family Rebuilds In America's Heartland

Back then, Awad was attending his first English class at a local church and couldn't say much more than his name. Today he's able to haltingly conduct a basic conversation in English.

He and his wife, Hiyam, also had a fourth baby — a boy, Salman, who just turned 1 and is a full-fledged American citizen. The other kids — Taiba, 5, Abdul-Jabar, 7, and Hammam, 10 — are now practically fluent in English.

But Hiyam says overall, this first year in the U.S. was tough.

"We came to a country that is not our country, and everything changed on us: the system, the people the area, the city," she says in Arabic. 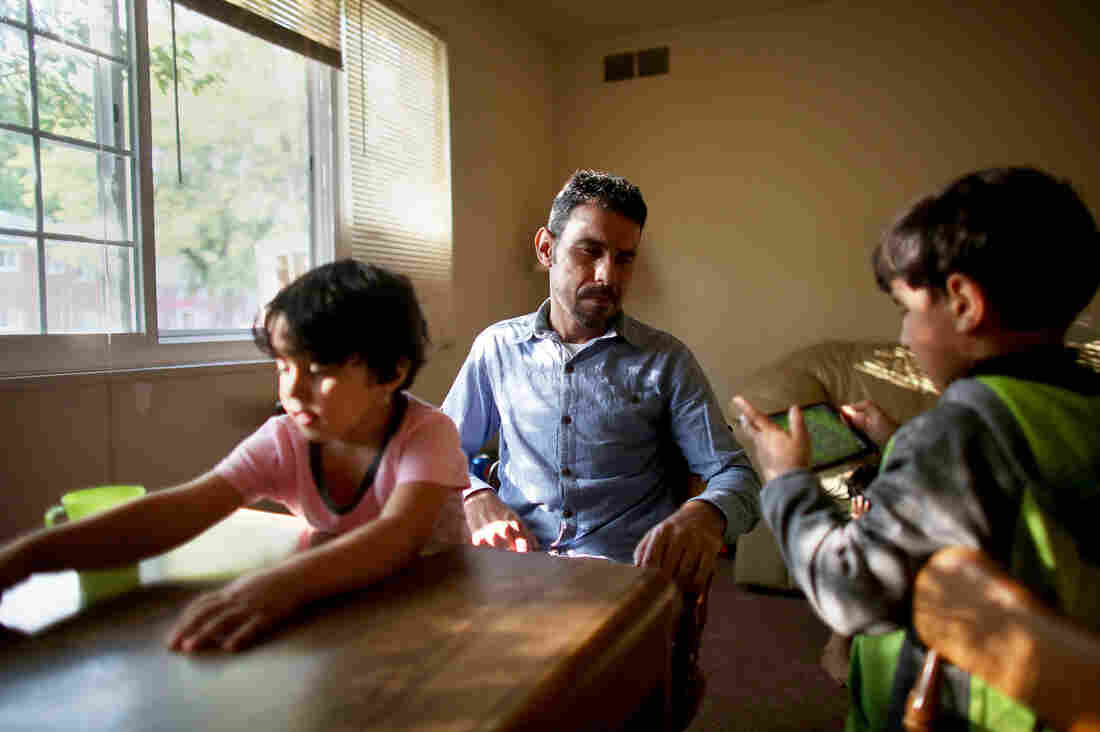 Omar Al-Awad sits with his daughter Taiba (left) and son Abdul-Jabar in their Toledo apartment in 2015. David Gilkey/NPR hide caption

Omar Al-Awad sits with his daughter Taiba (left) and son Abdul-Jabar in their Toledo apartment in 2015.

Though her husband is trained as a carpenter, for now he is working on a hospital cleaning crew. He says he is happy to be working. But what gives him the most pride is watching his kids flourish in school. Two of his children were just named student of the month. He was so proud he went out and bought them new toys.

Awad has come a long way, too. No longer the newest refugee, he now helps the new ones.

"I go with them to pay bills. There are days I take them to the doctor, bring them stuff from the store," he says in Arabic. 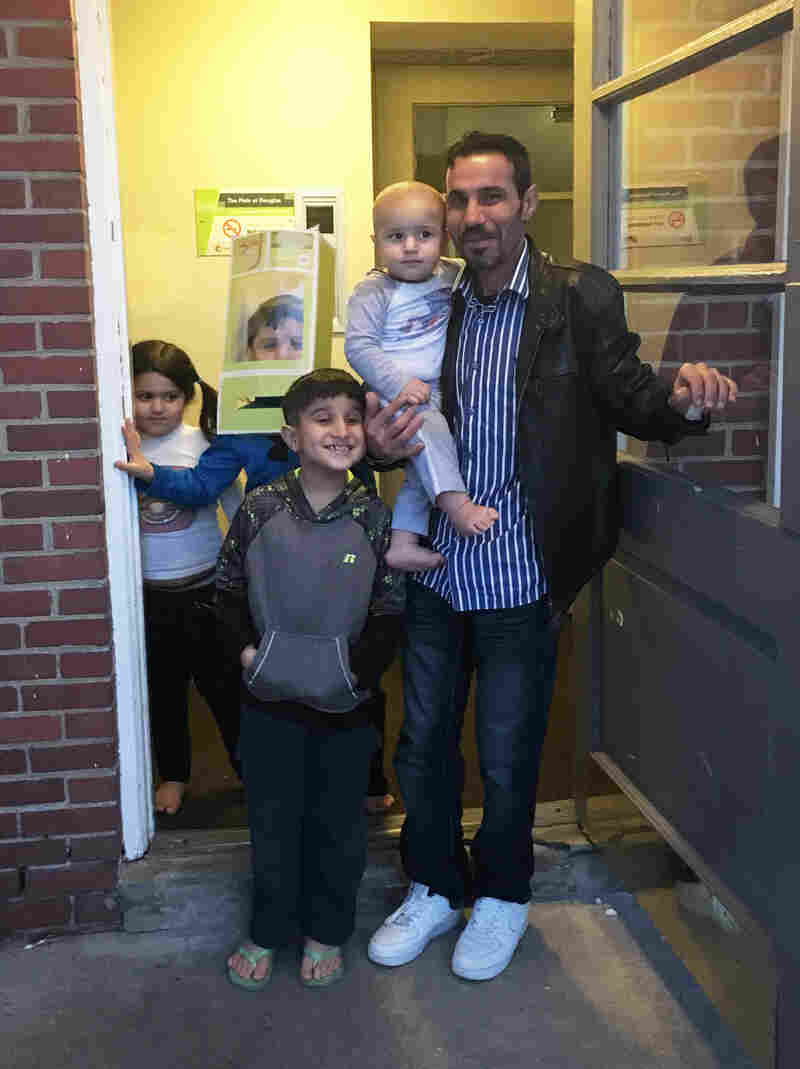 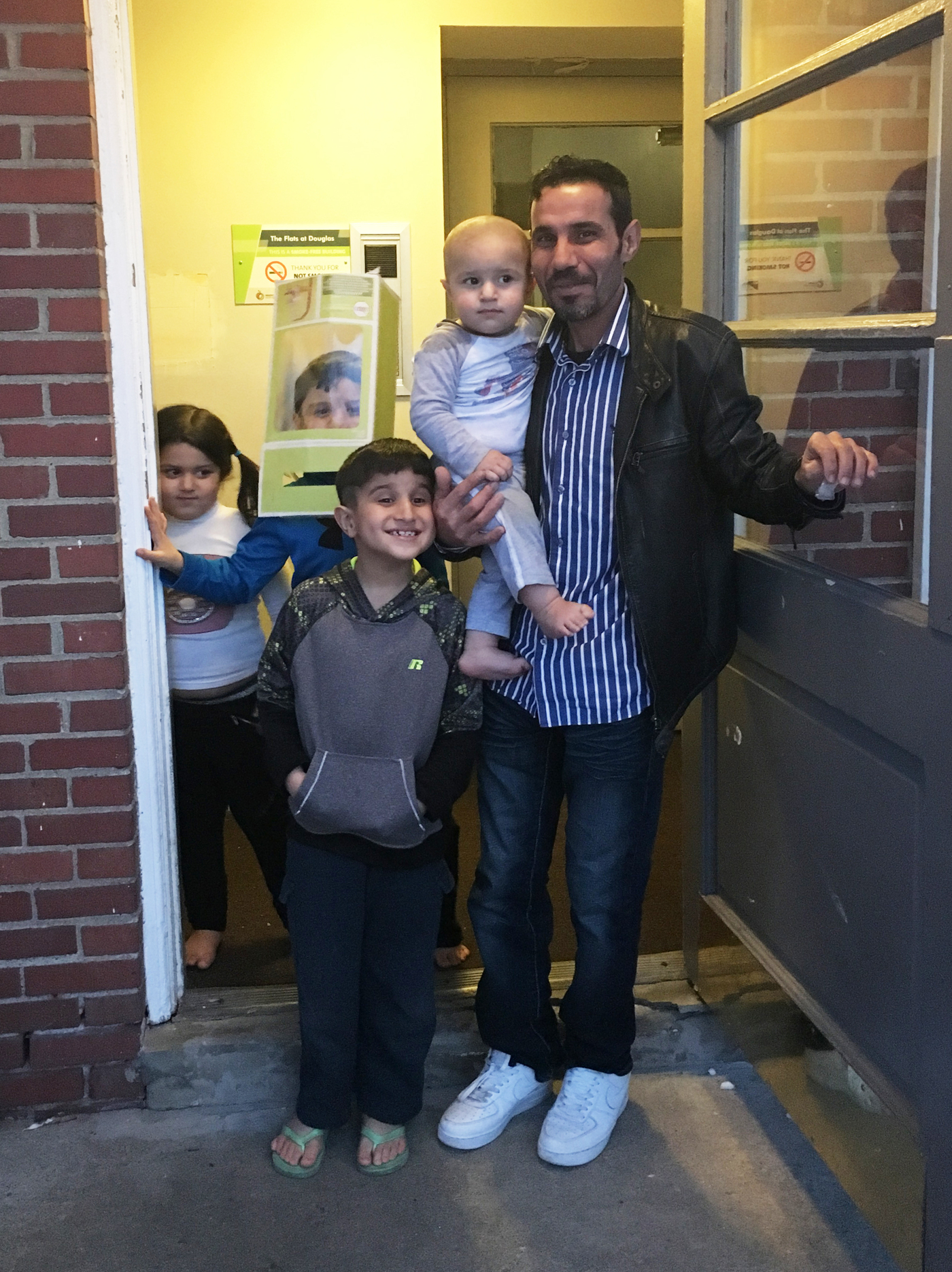 Omar Al-Awad stands with his four children in their apartment complex in Toledo.

The U.S. never took in a lot of refugees from Syria. With millions of people displaced, the U.S. admitted only 12,000 or so over the past five years. Some cities in Europe took in twice that many in a given week.

But President-elect Donald Trump may stop admitting Syrian refugees altogether, fearing that they could be dangerous.

"We are going to stop the tens of thousands of people coming in from Syria. We have no idea who they are, where they come from. There's no documentation. There's no paperwork," Trump said in September.

Actually, there's a lot of documentation and paperwork. The screening process often takes as long as two years. There are medical tests, background checks and round after round of interviews.

Awad feels lucky to have made it to the U.S. while the door was still open a crack.

"Anyone that is able to get out of these countries — whether it's Jordan, Lebanon or Turkey — of course the situation is better here than to be there," he says.

Those are countries where millions of Syrians sit in refugee camps, waiting to see what comes next. Awad's family spent two years at a refugee camp in Jordan before coming to Toledo.

One organization in Toledo works to settle new refugees who arrive here. They help people find housing, furniture and jobs. There's even a new program offering counseling for people who have experienced torture. The group is called US Together.

Recently, at an orientation organized by US Together, a pastor named Luke Lindon from a nearby church spoke to new arrivals from Syria.

"There are some people that you may have heard that may not feel as welcoming. They might be saying some scary things," he says.

Lindon is tall and gentle, with a shaved head. He sprinkles his conversation with "dude" and "blessings." He wants the new refugees not to feel afraid of differences.

Returning To Syria For Love: Why A Refugee Plans To Leave The U.S.

Returning To Syria For Love: Why A Refugee Plans To Leave The U.S.

"It scares our people here and it scares you all coming in," he tells them. "But I'm here to say that nothing defeats fear like a face."

When he finishes talking to the group, we sit down with him in an office.

"My own grandfather is a Slovakian immigrant who worked in the brickyards, and he recalled a time before World War II that he was not considered white," Lindon says. "He wasn't considered part of the populace. He was a problem. And so knowing that, we want to make sure that history doesn't repeat."

He says it's important to be truthful in talking to refugees about the climate surrounding immigration in the U.S.

"It's a reality. We've got to name the reality. We have to be truthful," he says. "But we also need to reach into this small group and welcome them as well as welcome others who were afraid of the conversation."

Toledo has seen generations of immigrants, including decades of Middle Eastern immigration. So when we went from one blue-collar bar to another, the openness to refugees was striking.

One bartender told us as long as the Statue of Liberty is still standing, refugees should be welcome in Toledo. Others had harsh things to say off the record.

One woman who wouldn't speak on tape said, "They've got their own country; they should stay there."

Then we met Jon Johnstone, who was in the Navy.

He's suspicious of people who continue to wear headscarves and speak in Arabic.

Corine Dehabey has heard it all. Her family is Syrian-American, her father was a U.S. fighter pilot, and she runs US Together. She stays focused on the positive. Last year more Syrian refugees arrived than she ever expected. She says the group had budgeted for 75; it ended up helping to settle 131 from October 2015 through November 2016. 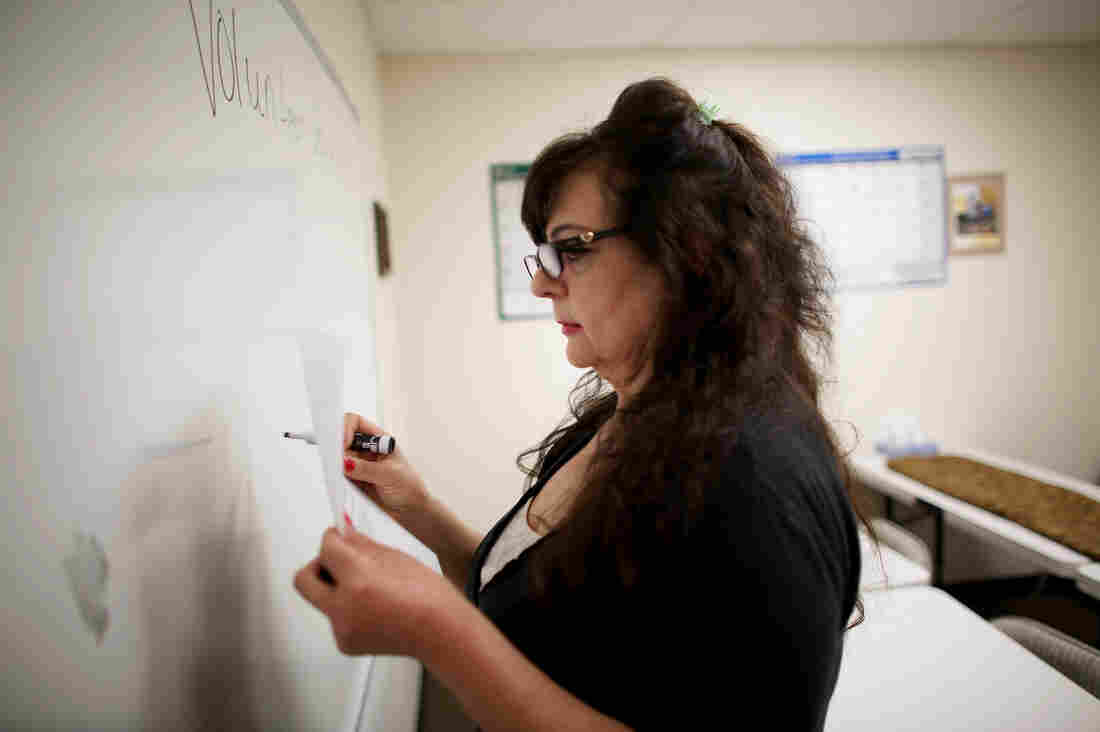 Corine Dehabey, the coordinator of US Together. David Gilkey/NPR hide caption 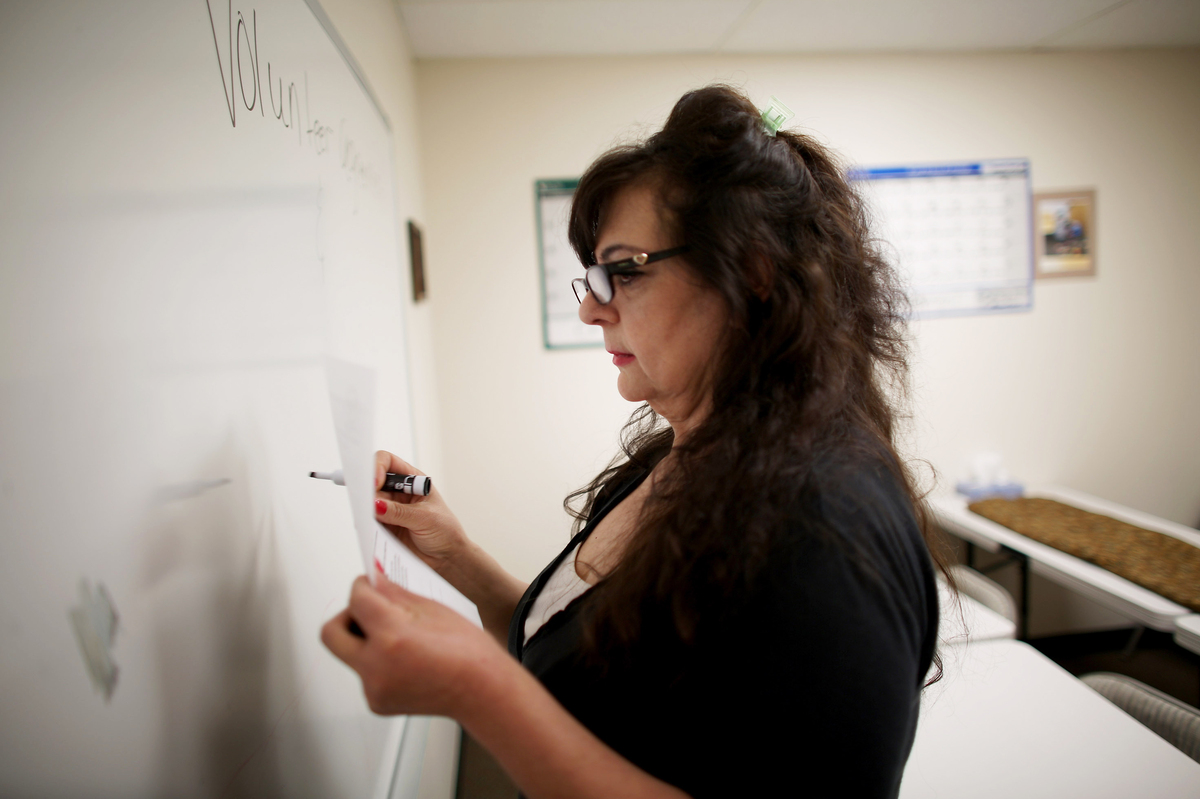 Corine Dehabey, the coordinator of US Together.

She says those families still need help. Their needs keep her busy enough that she doesn't dwell on what will happen after Trump's inauguration.

She says maybe his speeches about cutting off refugees were just political talk, empty promises.

If the refugees do stop coming, then Toledo's long history of integrating generations of people from other countries may have a pause.