Accessibility links
Betwixt And 'Between Us': Hipster Newlyweds Struggle To Stay Cool A couple takes pride in rejecting the trappings of a conventional married life — but the form their rejection takes is so marked by cliché that the film fails to sustain interest.

Betwixt And 'Between Us': Hipster Newlyweds Struggle To Stay Cool

Betwixt And 'Between Us': Hipster Newlyweds Struggle To Stay Cool 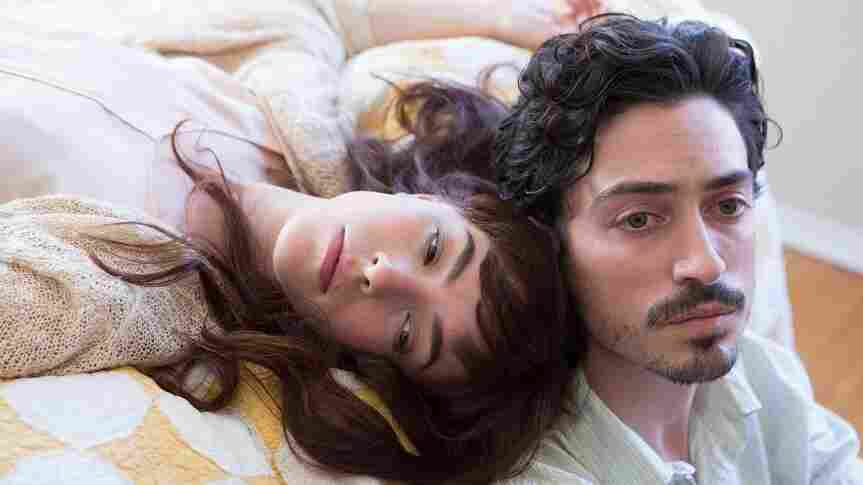 Joined At The Tragically Hip: Dianne (Olivia Thirlby) and Henry (Ben Feldman) in Between Us. IFC Films hide caption

Standing across from each other at City Hall, each wearing an outfit that barely passes for "dress casual," Dianne (Olivia Thirlby) and Henry (Ben Feldman) cannot make it through their wedding vows with giggling and rolling their eyes a little. It's not that they don't care for each other — though they're in a rough stretch — but for two people so allergic to convention, the institution of marriage is like a pollen bomb. Their instinct is to duck-and-cover when it detonates.

With Between Us, writer-director Rafael Palacio Illingsworth settles into that uncomfortable make-or-break period of a relationship when a couple either needs to make a lifelong commitment or cut the line. Yet it's a special torment for Dianne and Henry, who have defined themselves in opposition to the "boring" trappings of marriage, children, and suburbia, but are about to inch into them all the same. Underpinning their anxiety, however, is the realization that they can't go back to their bohemian roots, when love was new and exciting and they were unburdened by time or adult responsibilities. They can never know the feeling of falling in love again.

For Between Us to be special, Illingsworth and his leads would have to animate the familiar with the particular, but Dianne and Henry hew too closely to type. When the film opens, they're poised to buy a sleek modernist apartment at the behest of Henry's parents (Peter Bogdanovich and Lesley Anne Warren), but Henry throws a fit at the last minute. To him, a mortgage feels as binding as a marriage license and he hasn't finished fighting the inevitable. Dianne gets upset with his dithering, but she's equally reluctant to plant her foot on that slippery slope. When children are around, Illingsworth amps up the sound like a horror movie.

After a fight on their wedding day, Dianne and Henry split off into separate dark-nights-of-the-soul encounters, and it's certain how they'll feel about each other in the morning. Henry, a filmmaker, reconnects with an admirer (Analeigh Tipton) and gets drawn into her world of experimental music and polymorphous perversity; Dianne fools around with a moonlighting stage actor (Adam Goldberg) who's been married 15 years, but doesn't seem restricted by his vows. It isn't quite accurate to describe either Dianne or Henry as sowing their wild oats, because they're really deciding whether to keep on sowing indefinitely.

At a Q&A for one of Henry's movies, the moderator describes his work as "raw and honest," primed to make the audience cringe in recognition, which is Illingsworth more or less writing his own review. Much like Henry and Dianne, Between Us resides in an uncomfortable place between the conventional and faux-iconoclastic, like a better-than-average indie relationship drama that occasionally breaks out into an unruly John Cassavetes production. Illingsworth does best when he plays the conflict straight and doesn't indulge in boozy shouting matches or arty flourishes, like having a metaphorical storm cloud hover over the interior of Dianne and Henry's apartment.

Thirlby and Feldman have been doing memorable work on the sidelines of larger productions—Thirlby has been a spark since Juno and Feldman had a terrific run as a slick attorney on HBO's Silicon Valley—and Between Us gives them the opportunity to step out and showcase their range. Illingsworth suppresses their comic instincts more than necessary, but Thirlby and Feldman make Dianne and Henry's relationship feel lived-in and real, a five- or six-year accumulation of experience that clings like tartar on the teeth. That feeling of familiarity is both asset and liability: Between Us is full of common truths about love in crisis, but short on revelations.