Accessibility links
'La La Land' Director Aimed To Make A Film Even Musical Skeptics Would Love "Movies are kind of limited by what you see in front of the camera," says director Damien Chazelle. "Musicals find this wonderful way around that." 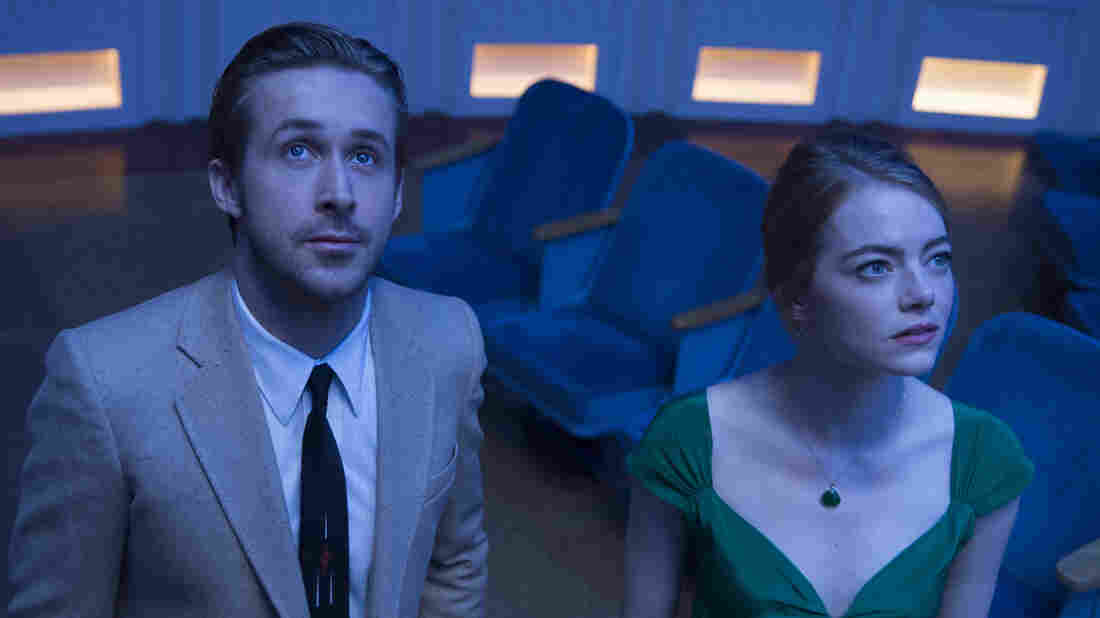 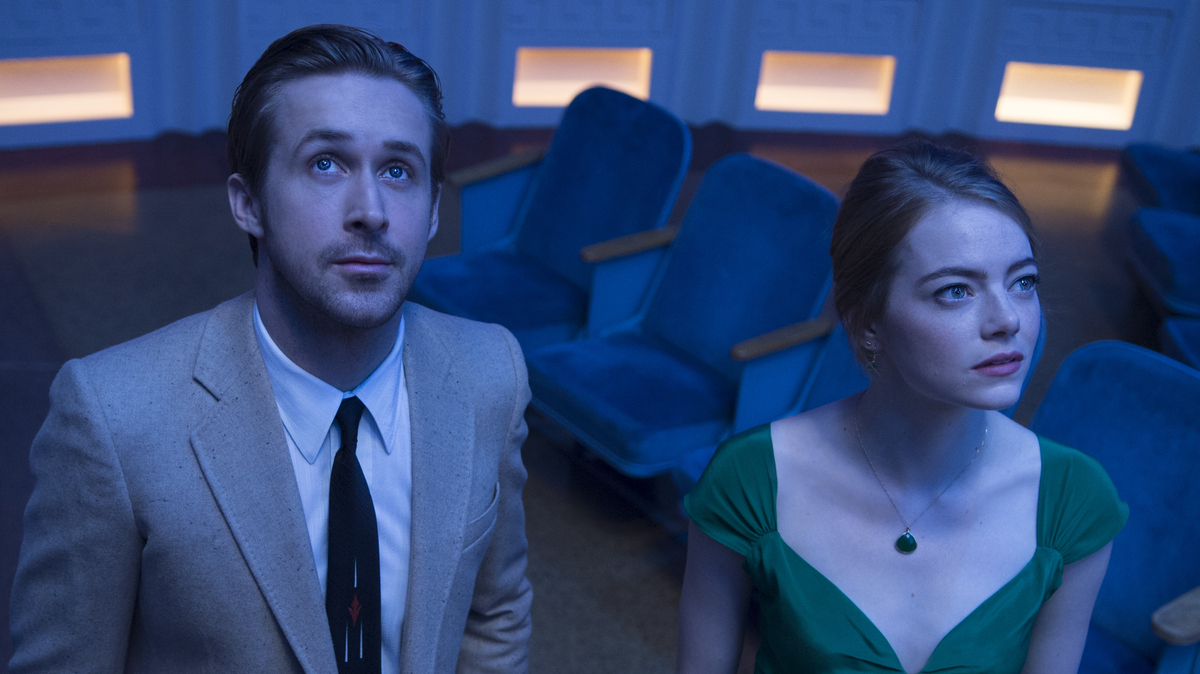 Ryan Gosling and Emma Stone are aspiring artists in the movie musical La La Land. The film has been nominated for seven Golden Globe awards.

Director Damien Chazelle's La La Land is an unapologetic musical that hearkens back to Hollywood's glory days of song and dance. The passion and grandeur of the musical numbers might make you believe that Chazelle had always imagined himself working in the genre, but he tells Fresh Air's Terry Gross that's not the case.

"It wasn't until I actually started making experimental films and, ironically, documentaries in college that I think my eyes got re-awakened, or awakened, to ... old classic Hollywood musicals," Chazelle says. "There was something about them that felt like, 'Oh my God, here is an experimental movie in mainstream packaging.' " 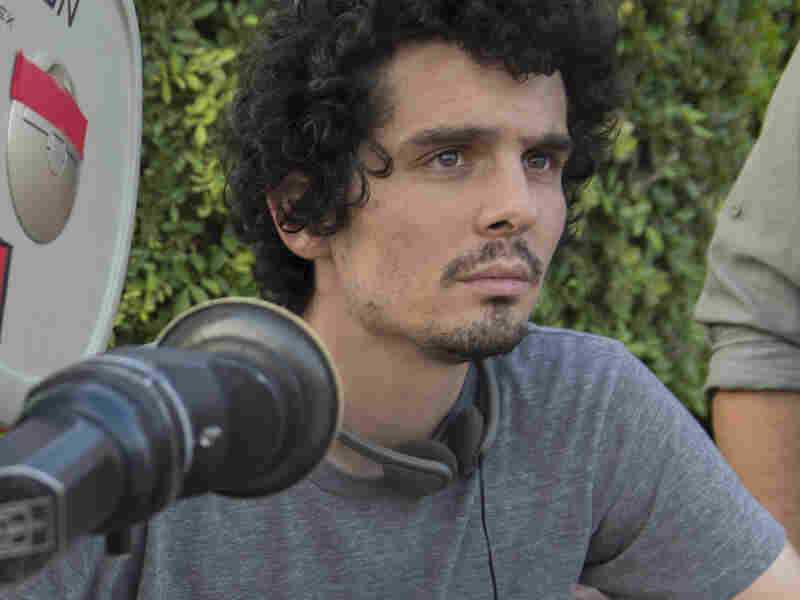 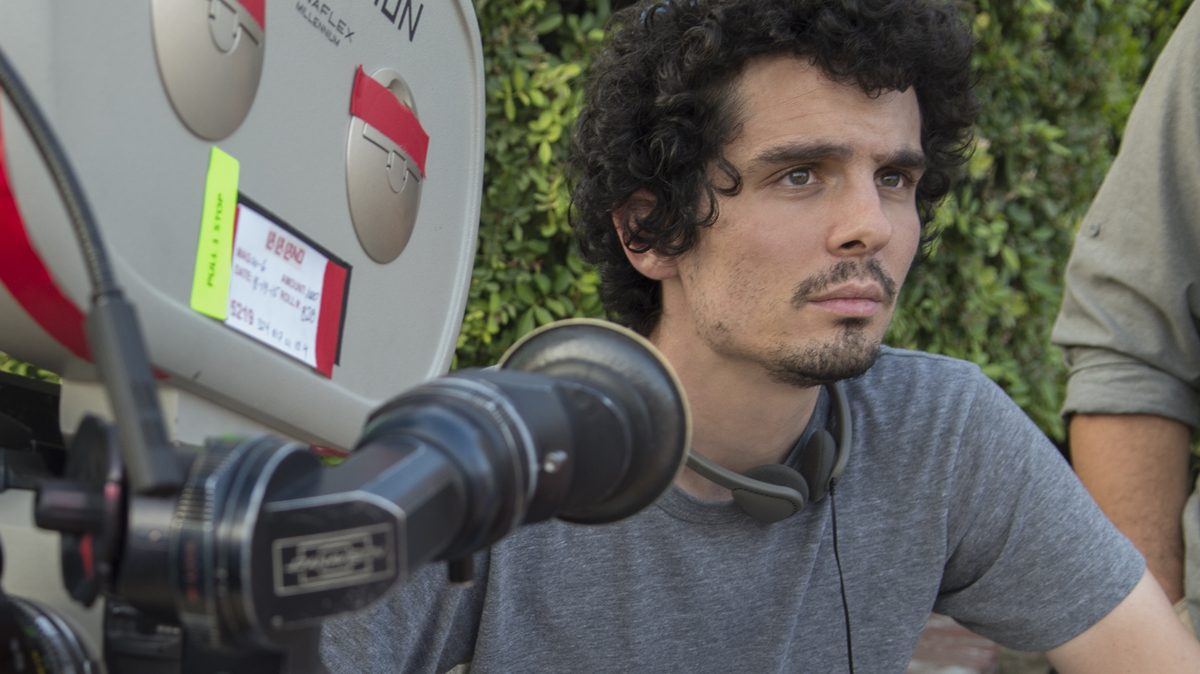 La La Land is a love story set in the present day, but the influence of old Hollywood and musicals of the past is all around. The film features Emma Stone as an aspiring actress and Ryan Gosling as a jazz pianist, both of whom are struggling to reconcile their showbiz dreams with reality.

Chazelle says that the film's song and dance numbers provide the audience with an insight into the characters that is often missing in film. "In a weird way, movies are kind of limited by what you see in front of the camera," he says. "Musicals find this wonderful way around that, because the songs are ... an expression of inner feelings that can't be articulated any other way."

On what musicals do that non-muscials can't

There's something so brash and defiant and almost avant-garde about the idea of just breaking the normal rules of normal reality. Movies have kind of been engineered over the century to somewhat reflect reality usually, even if it's a fantasy or something. There's some kind of an assumption that things are going to follow a certain order, and musicals just break that. They break it in the name of emotion. That, I think, was a really powerful, beautiful idea to me, that if you feel enough you break into song.

On the film's opening number, which is set in a freeway traffic jam

We're on this kind of elevated freeway ramp that's in utter gridlock and ... one by one characters start to kind of join in this collective number. The idea was to go from [an] individual car radio ... and all these individual sounds build in and sort of layer into this one collective song that eventually explodes into full-out joyful unison singing and dancing before all the drivers return to their cars. The idea was to sort of introduce the world and, I think even more importantly, begin the musical with as musical-esque a scene as we could possibly imagine — really try to announce our intentions right off the bat with a bang.

One thing that I think that has kind of been lost a little bit is the idea of choreographing dance for the camera. That to me was the beautiful thing about old Hollywood musicals from Fred [Astaire] and Ginger [Rogers], through the Gene Kelly/Stanley Donen pictures, to something like Seven Brides for Seven Brothers. ... There's a wonderful barn dance set piece in the middle of that movie, which was a big reference for this. ... It's all about how the dance looks in relation to a single camera, not "let's do the dance like a live event and just film it with 15 cameras and then we'll find it in the editing room."

So that long take aesthetic was there right from the beginning. And my choreographer, Mandy Moore, had to choreograph with that in mind, and the DP [director of photography], Linus Sandgren, had to kind of be involved in that choreography. So it was really the three of us and this troupe of dancers that Mandy and I brought together rehearsing, rehearsing, rehearsing for months. And often very theoretically, because the other problem with shooting on a freeway ramp is that you can't really rehearse onsite very easily. And so we were able to find this elevated ramp that the city would let us shut down for a Saturday and a Sunday to shoot. 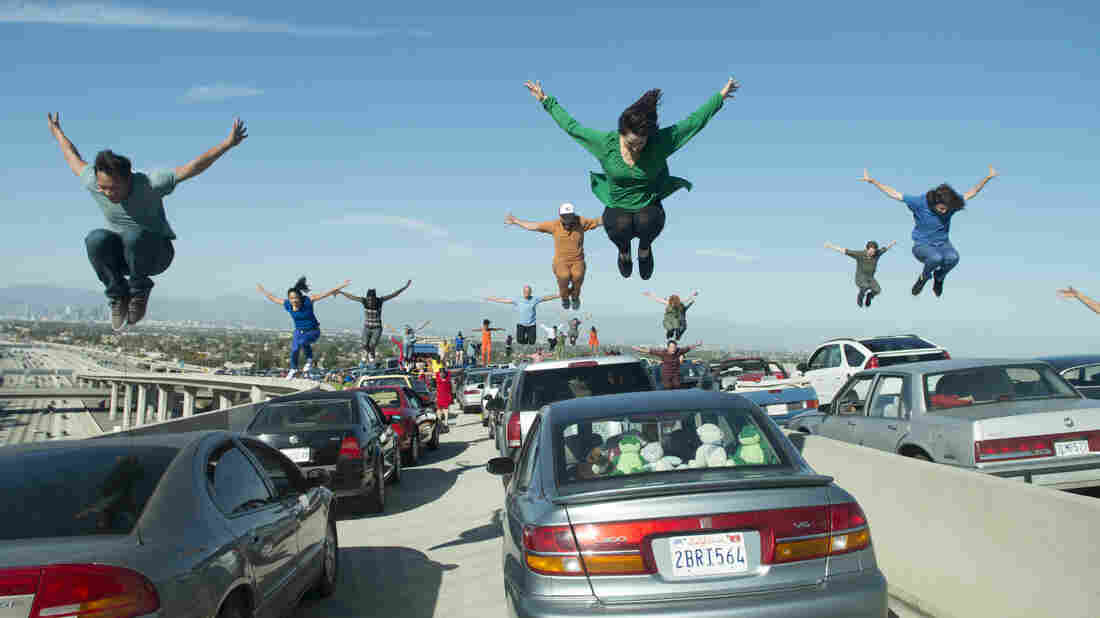 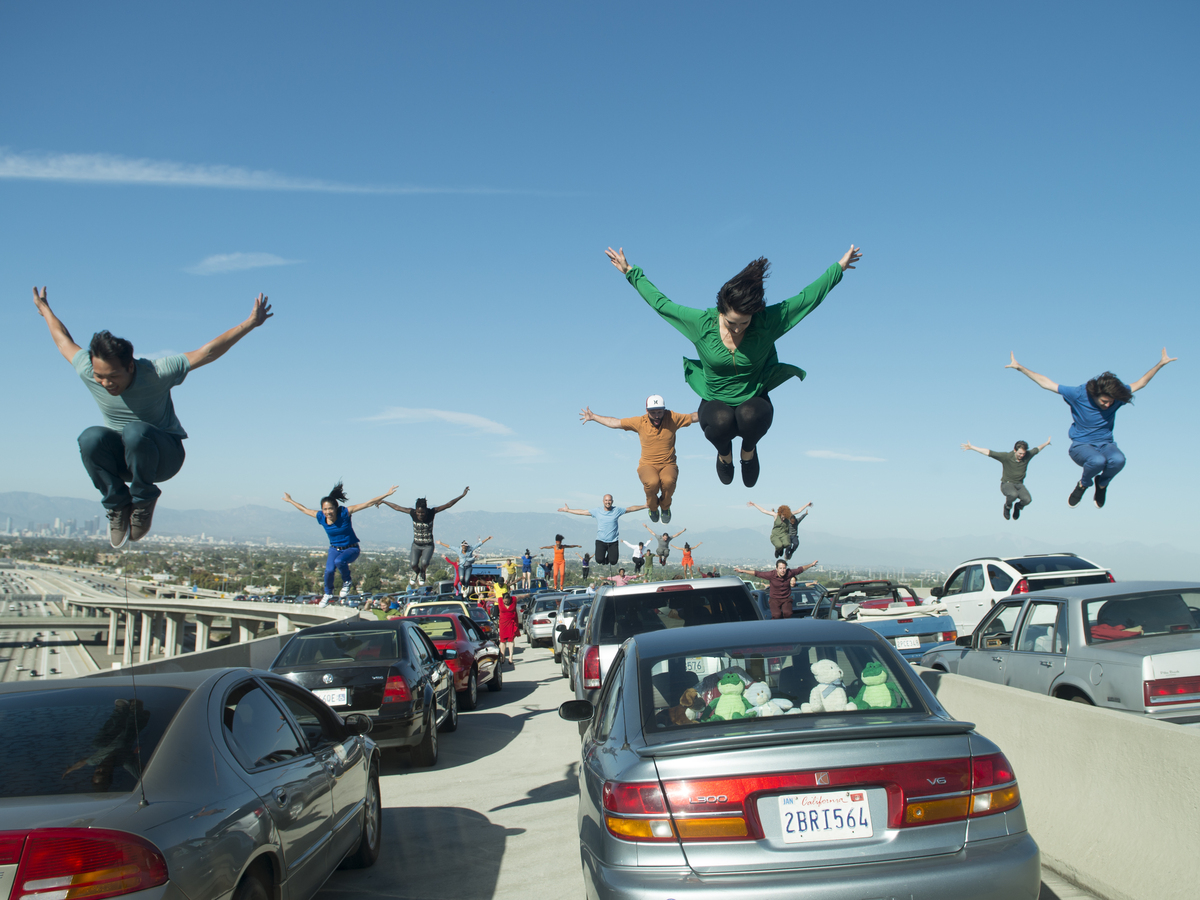 The opening musical number of La La Land takes place on the freeway during a massive traffic jam.

On wanting to appeal to musical skeptics

You hear a lot, especially when you're making a musical today, how much distaste for musicals exists in the world and how many skeptics there are, so ... it was important to me to reach out to the skeptics, to have this movie not just play for a little coterie of musical die-hards, of which I would include myself. ...

There is that kind of needle scratch sometimes — you can even feel it in a theater when a song begins and it hasn't been quite properly set up. So I always thought of the analogy of the frog in boiling water and the idea that if you drop the frog right away in boiling water it feels it and jumps out, but if you put a frog in room temperature water and then slowly boil it over the course of however long, it won't realize that it's boiling and it'll just sit there and die.

So I kind of wanted to put the audience through — this will sound morbid — but through the same sort of process where they kind of don't even necessarily realize as it's happening that they're being sucked into a musical.

At the point that I wrote Whiplash I had been paying the bills in L.A. mainly by writing genre pictures and sort of doing rewrites on horror movies and sequels and stuff that was very not personal to me. I was just trying to make a living. ...

Whiplash in some ways was the most autobiographical thing that I had written up to that point. ... There was a phase in my life, it was mainly high school into college, where music and specifically jazz drumming, as you see in Whiplash, was everything for me. It had a lot to do with a very intensive jazz program at my high school that I was a part of, and a very demanding teacher, and certain emotions I felt as a young player where the kind of enjoyment and appreciation of the art of music was inextricably wrapped up in fear and dread and anxiety about getting something wrong. ...

On what Whiplash and La La Land have in common

When I think about when I was writing Whiplash, a lot of what I was grappling with as well is how do you become whatever you're supposed to become? I guess that's there in La La Land, too. ... You don't know for sure whether you actually "have what it takes," and also you don't know if that whole idea of having what it takes — is that actually its own kind of nonsense? Is talent even really a thing? Is it actually just the best musicians are the musicians that work the hardest? Or the musicians who listened the most? Or the musicians who are lucky enough to be at a certain place at a certain time and what we think of as a meritocracy is actually not? ...

I think all those questions were swirling around my head and are still, I think, to a certain extent.