Accessibility links
The Job Market Under President Obama, In 8 Charts President Obama inherited an economy that was cratering, the worst recession since the Great Depression. Slowly, but surely, things have turned around. The job market is strong, but quickly shifting. 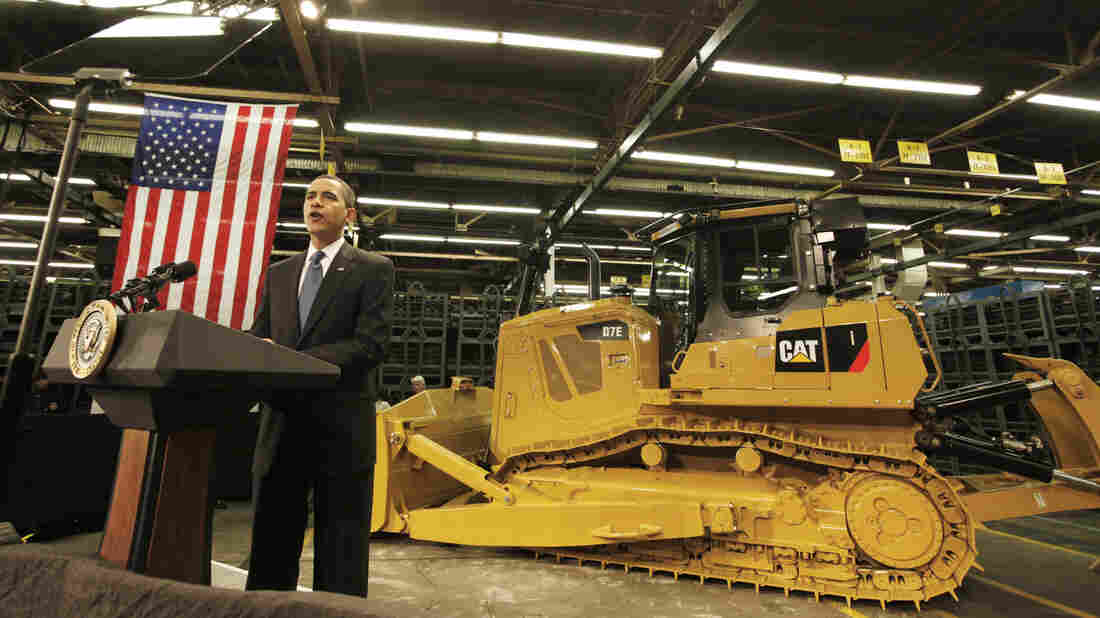 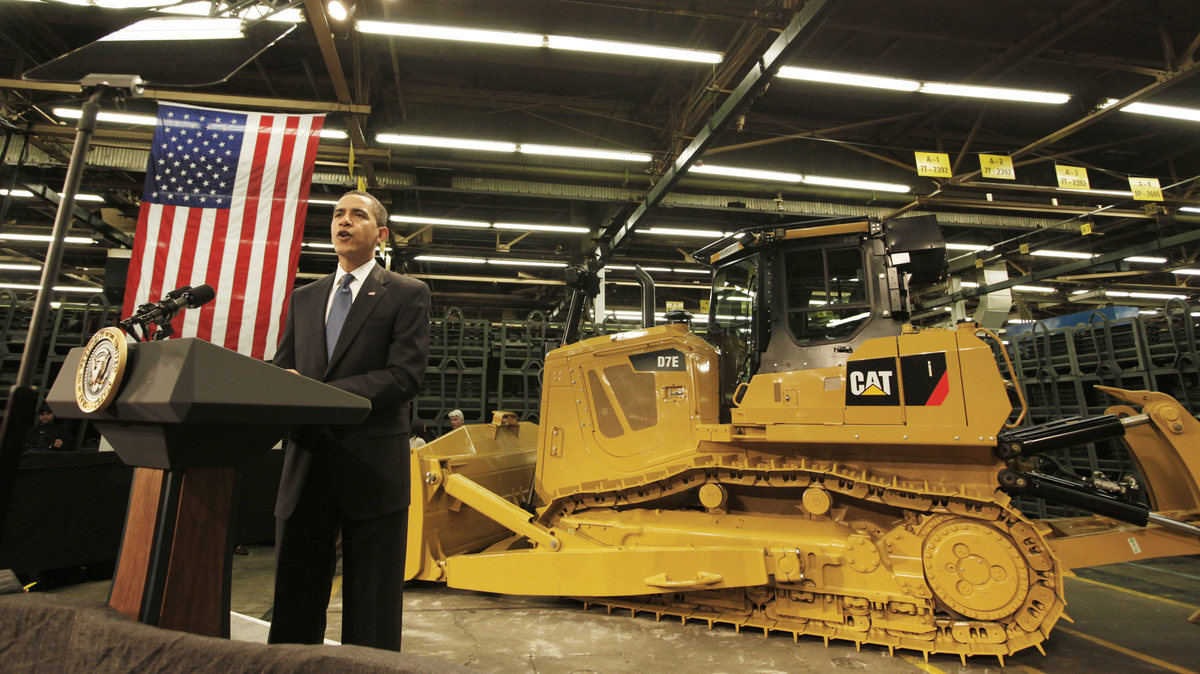 President Obama speaks to Caterpillar employees in East Peoria, Ill., in February 2009 about the then-struggling economy.

The final chapter of the Obama economy drew that much closer to its end on Friday, with the final jobs report of the 44th president's time in office. That report showed the 75th straight month of job growth, with employers adding 156,000 jobs.

Solid, but nothing flashy.

In that way, it was emblematic of how the job market has generally fared since the worst of the Great Recession's aftermath: chugging along, slowly but surely recovering.

With the final Obama administration jobs day in the books, it's a good time to look at how American workers have fared. Donald Trump will inherit a job market that is vastly rehabilitated from devastating lows just a few years ago. However, it has also undergone profound changes that have scarred many American workers.

Unemployment: How low can it go?

As Obama prepares to leave office, the unemployment rate is at 4.7 percent, less than half of the peak it reached in October 2009.

That decline is the result of a prolonged period of job growth. The administration has grown fond of showing off its prolonged run of job growth every month.

For some perspective, here's how big that job growth was: Obama averaged 109,000 jobs per month. That's far better than either President Bush experienced, but it's well below the 242,000 that Bill Clinton presided over in the roaring 1990s. For Reagan, it was 166,000. 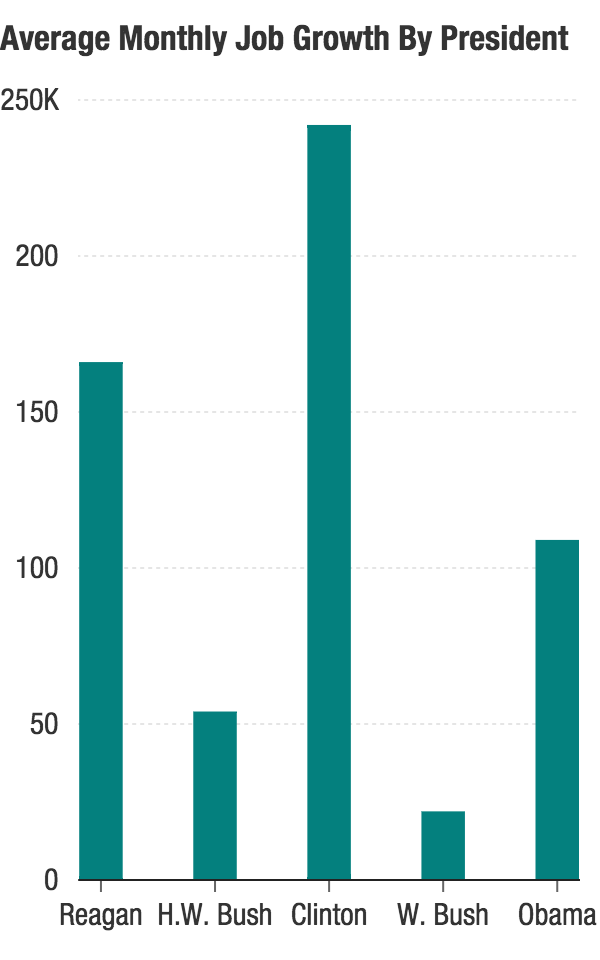 Of course, President Obama came into office as the economy was plunging into a recession (a plunge that also drags down George W. Bush's number). But even if you average out Obama's 75 straight months of job growth, you get 199,000 jobs per month, still shy of Clinton's economy.

In other words, the Obama recovery has been moderate, but remarkably steady. The question is how long that steady climb can continue uninterrupted. The unemployment rate is already near a nine-year low, as Steven Russolillo at the Wall Street Journal pointed out this week, and there is some question among economists how low it can go.

Having a job is one thing. Having a job that pays well is another. And slowly through Obama's tenure, those wages have inched upward. In fact, wages were one bright spot of Friday's jobs report. Average hourly wages were up by 2.9 percent in December. After several years of hovering around 2 percent, that's welcome growth.

Aside from meaning more money in workers' pockets, wage growth serves as yet another sign of a tightening labor market, signaling that employers are willing to pay more to attract workers.

Rising wages may inspire the Federal Reserve to take its foot further off the gas pedal in the coming months (that is, allow interest rates to rise) — a reminder that the economy isn't exactly under the president's control. (More on this later.)

Labor force participation is low, but what does it mean?

This one became a flashpoint in the presidential election, with Trump at times pointing out how much the labor force shrank under Obama. The main measure of this is the labor force participation rate — that is, the percentage of people who are either working or looking for work (that is, who are in the labor force).

But it's not clear how bad or how benign that change is. Many Americans are out of the labor force and entirely happy about it. Quitting work to retire, for example, is a totally nonalarming reason to leave the labor force. But then, there may be many people who, facing a tough job market, have given up looking for work. That's not good, and it also happened for many Americans both during and after the recession.

In the aftermath of the recession, economists have tried to figure out exactly how many people are voluntarily versus involuntarily out of the labor force. As of 2014, the nonpartisan Congressional Budget Office estimated that half the decline in the participation rate at that time had come from "long-term trends" like aging — as baby boomers age, that means a large chunk of the population will naturally retire. But that left half of the decline a result of economic weakness and a slow recovery, in the CBO's estimation.

Should the participation rate hold steady or creep upward during a Trump presidency, that could keep the unemployment rate from dropping, as only Americans who are looking for work are counted as "unemployed." That would be one of those cases where a slightly higher unemployment rate could be a good thing.

Full-time job growth over the course of the Obama presidency has far outstripped part-time job growth, as FiveThirtyEight's Ben Casselman has pointed out.

Part-time jobs ticked up in November, but overall, employment growth in recovery has been almost all full-time. pic.twitter.com/m1MrB1ZA3e

An economy more about doing than making

Politicians of both parties love to talk about manufacturing. Obama pushed manufacturing initiatives throughout his presidency, and Trump built much of his economic message during the campaign around singing the praises of America's manufacturers.

But when it comes to employment, the goods-producing share of the economy has continued to fall. Throughout the past few decades, the share of Americans who make things — people in manufacturing, mining, logging and construction — has fallen off, and that trend continued during the recent recession, finally flattening out toward the end.

We present this chart over a longer time frame, which makes it a little bit of a cheat — this isn't exactly a measure of Obama's "record on jobs." Nor is it necessarily a measure of economic weakness; in fact, manufacturing has, thanks to technological advances, maintained strong output while shedding workers.

It's a reminder that all the usual macroeconomic indicators (unemployment, wages, labor force participation, GDP) can quantify a lot of things in the economy, but you have to dig in to learn about the quality of that economy — what exactly is going on behind those numbers. This decline in goods-producing jobs doesn't signal that the economy is getting worse or better — it's just changing, in this case to become more focused on providing services, instead of goods.

All of this is to say that Trump inherits a job market that is humming along comfortably, given how poor of shape it was in only recently. But it's also an economy that has sharply moved away from manufacturing and other goods-producing industries — the very ones he pushed the most in the election. That change has hurt plenty of Americans, despite the job market's improvement.

Trump has tried to claim credit for several hundred goods-producing jobs here and there (credit that he doesn't always deserve, as the Washington Post's Philip Bump has reported), but bringing manufacturing employment back in a sizable way seems like a tall order for any president. Furthermore, alternative work — like driving an Uber or Lyft — continues to grow quickly as a share of the economy. That change could eventually require policy attention, as more workers take jobs that don't come with benefits.

But there's another big caveat here. Presidents get lots of credit and blame for the economy's performance, despite the fact that they don't really have firm control over that performance. (If they did, why would recessions ever happen?)

Yes, a president can push an economic agenda and in some cases push particular policies that end up having a sizable impact on the economy (see: the 2009 stimulus package, which undeniably had a positive impact).

But they also need Congress to enact those policies. Not only that, but the Federal Reserve has its own set of controls — a set to which the president does not have access, despite some conspiracies of politically motivated Fed scale-tipping.

So, like Obama, whatever happens to the economy under Trump, he may not deserve whatever credit he may claim (and the same goes for whatever blame is thrown his way).