Accessibility links
Some Rockettes At Odds With Management Over Inauguration Performance The Rockettes are as American as apple pie, but some dancers in the famous troupe don't want to perform at Donald Trump's inauguration.

Listen · 3:49 3:49
Some Rockettes At Odds With Management Over Inauguration Performance 3:49

The Rockettes are as American as apple pie, but some dancers in the famous troupe don't want to perform at Donald Trump's inauguration.

The inauguration of President Trump is a couple weeks away, and his team has been scrambling to find performers. One group that signed on is the famous precision dancing troupe The Rockettes. And while they are known for synchronization onstage, cracks have begun to show in their ranks. Jeff Lunden sent this report.

JEFF LUNDEN, BYLINE: When you see The Rockettes in person - thirty-six dancers of the same shape and height, all tapping and kicking in unison - it's thrilling.

LUNDEN: Rosemary Novellino-Mearns danced at Radio City, and she wrote a book about it.

NOVELLINO-MEARNS: You may like them. You may not like them. That's not the point. They are what they are.

LUNDEN: And dancing at presidential inaugurations has traditionally been part of the job, but this time is different. Some of The Rockettes don't want to perform for Donald Trump, whose comments about women have made them uncomfortable. That puts them in conflict with their employer, Madison Square Garden Entertainment, which agreed to the appearance without consulting the dancers. The conflict has been playing out in public, kind of.

AUTUMN WITHERS: You don't want your face and your image and your talent up there on that stage in celebration of someone like that.

LUNDEN: That's former Rockette Autumn Withers, who's still good friends with many members of the troupe. She says according to their contract...

WITHERS: When you're an active Rockette, any interview with the media must be orchestrated through their PR department.

LUNDEN: So most of the communication has been on the down-low. One Rockette, Phoebe Pearl, criticized the decision on Instagram. Later, she made her account private. Another spoke to Marie Claire magazine under a pseudonym. No current dancers would speak to NPR for this story, which didn't surprise former Rockette Lora Anderson.

LORA ANDERSON: And now you know why. I got spoke out once, and I couldn't dance for two weeks. I went to the building, and they took my ID and did not let me in. It's hard for one person to speak out against a multibillion-dollar company.

LUNDEN: We still don't know who that pseudonymous Rockette is, but we do know that she secretly recorded a meeting between the dancers and Madison Square Gardens chairman James Dolan. MSG has said that participation is voluntary, but in the meeting Dolan also stressed that participation was good for the brand. When a dancer asked if this was tolerating intolerance, Dolan reportedly replied quote, "yeah, in a way, I guess we are doing that." Former Rockette Autumn Withers...

WITHERS: Yeah. I mean, that just cuts right to my heart, telling these women to tolerate intolerance.

LUNDEN: MSG issued a statement saying, quote, "while Mr. Dolan stands behind everything he said during the meeting, no one in that room believed they were speaking publicly." Autumn Withers says to be fair, there are several Trump supporters among the ranks. And MSG says they've gotten more volunteers than slots to fill. Still, Withers thinks the dancers are between a rock and a hard place, and she says several of her friends have already declined.

LUNDEN: And there's also been some pressure on social media - people writing shut up and dance, says Rosemary Novellino-Mearns.

NOVELLINO-MEARNS: I think they're afraid. I get that it is their job. And probably, if I was there, and they said, this is your job - you have to do it - I probably would do it, but I certainly wouldn't do it quietly.

LUNDEN: And in quiet resistance, some Rockettes are speaking loudly. For NPR News, I'm Jeff Lunden in New York.

Following Negotiations, No Rockettes Will Be Required To Perform At Inauguration 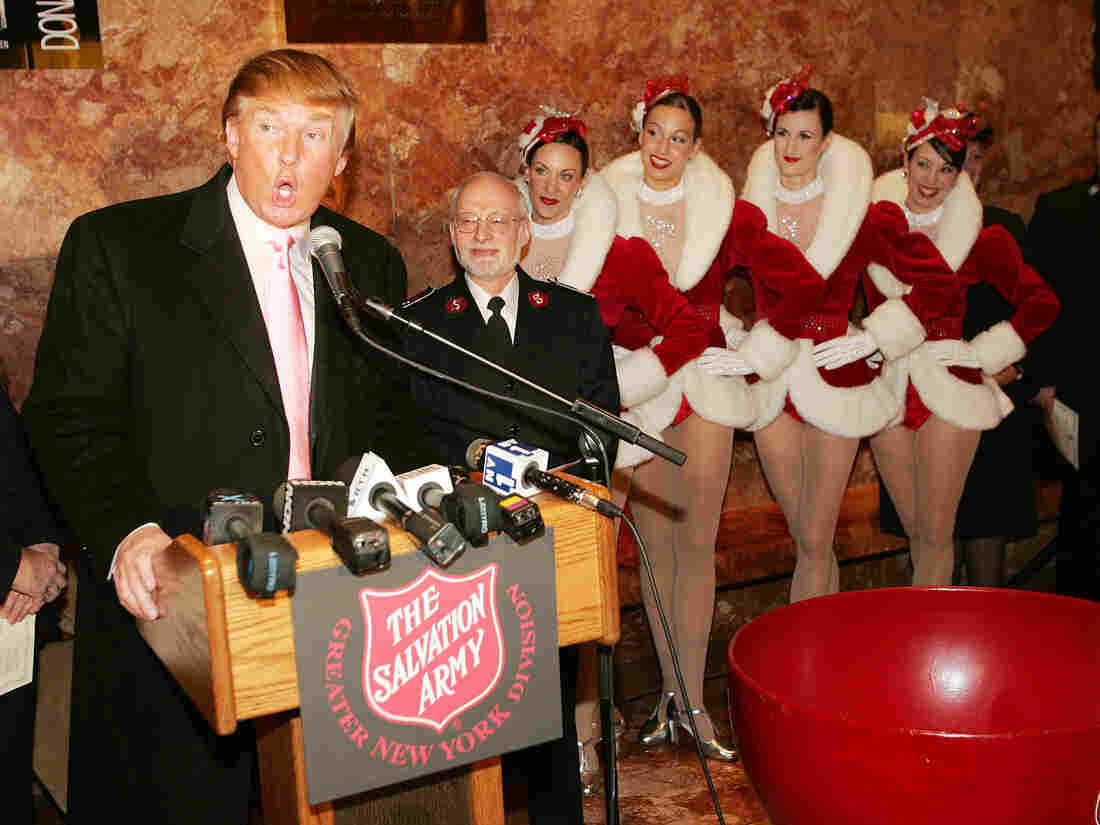 The Radio City Rockettes with Donald Trump in 2004. The Rockettes' union announced late Friday that no dancer would be obligated to perform at the president-elect's inauguration last month. Scott Gries/Getty Images hide caption

The Radio City Rockettes deal in precision, but the story of the group agreeing to perform at Donald Trump's inauguration ceremony next month is a bit of a mess.

At least some of the dance group didn't want to perform for the incoming president's celebration, but a string of messages between dancers, their union and the troupe's ownership group over the latter part of the week caused confusion for many. Ultimately, dancers will now be able to individually choose whether or not to perform on Inauguration Day.

Let's break it down:

Late Friday, following negotiations with the Rockettes owner, the Madison Square Garden Co., and the performers' union, The American Guild of Variety Artists (AGVA), announced on Facebook that no Rockettes would be obligated to perform.

"Fortunately, the Company has agreed that ALL participation in this particular event will be voluntary. We are greatly relieved and hope to work with our Members to inform them and alleviate the anxiety and fears that this has caused."

How we got here:

Donald Trump's transition-team and the Madison Square Garden Co. confirmed that the Rockettes would perform at the president-elect's inauguration next month.

Almost immediately, the Rockettes were coming under criticism on social media — including from one Rockette herself.

In a since deleted post on Instagram, dancer Phoebe Pearl said she was "embarrassed and disappointed" to learn of the decision.

"The women I work with are intelligent and are full of love," Pearl wrote. "The decision of performing for a man that stands for everything we're against is appalling." She added, "We have been performing with tears in our eyes and heavy hearts," with the hashtag #notmypresident.

Any talk of boycotting the performance seemed to be quashed by the Rockettes' union — the American Guild of Variety Artists (AGVA). In an email obtained and published by Broadwayworld.com, a union representative wrote that "Everyone is entitled to her own political beliefs, but there is no room for this in the workplace." The letter noted that dancers who are not full time did not have to sign up to perform, but "if you are fulltime, you are obligated."

The story was widely circulated by news outlets, including CNBC, Rolling Stone, the BBC, and NPR.

The Madison Square Garden Co. released a statement stating that all performances were voluntary:

"The Radio City Rockettes are proud to participate in the 58th Presidential Inaugural. For a Rockette to be considered for an event, they must voluntarily sign up and are never told they have to perform at a particular event, including the inaugural. It is always their choice. In fact, for the coming inauguration, we had more Rockettes request to participate than we have slots available. We eagerly await the inaugural celebrations."

In a post on the AGVA's Facebook page, the union stated that following a meeting, the Madison Square Garden Co. had agreed that all participation would be voluntary (though the MSG Co. seems to be saying that was the case all along.) The AGVA also clarified the language of their Thursday email, stating:

The Union never "demanded" that the Rockettes perform at the inauguration. A message was sent to the Rockettes last evening that stated the terms of their contract. There is a small group of year round Rockettes who are contractually obligated to perform at scheduled events throughout the year. We are pleased that Radio City has agreed that for those Rockettes with year-round employment, participation in this event will be voluntary as well.

So, it seems that Rockettes who don't want to participate are off the hook. But the dance troupe is not the only group coming under fire for being involved in the inauguration celebrations.

The Austin American-Statesman reported Thursday that Texas State University's dance team, The Strutters, had shut down its Twitter account following harsh criticism for agreeing to participate. It remained deleted as of midday Saturday.

Thoughts were mixed on the group's announcement on Facebook.

Several major acts, including Elton John, Garth Brooks, Celine Dion and Idina Menzel, have reportedly refused to participate in the inauguration celebrations. In response to a question from Vanity Fair about Trump's difficulty locking down performers, Menzel said, "It's karma, baby."