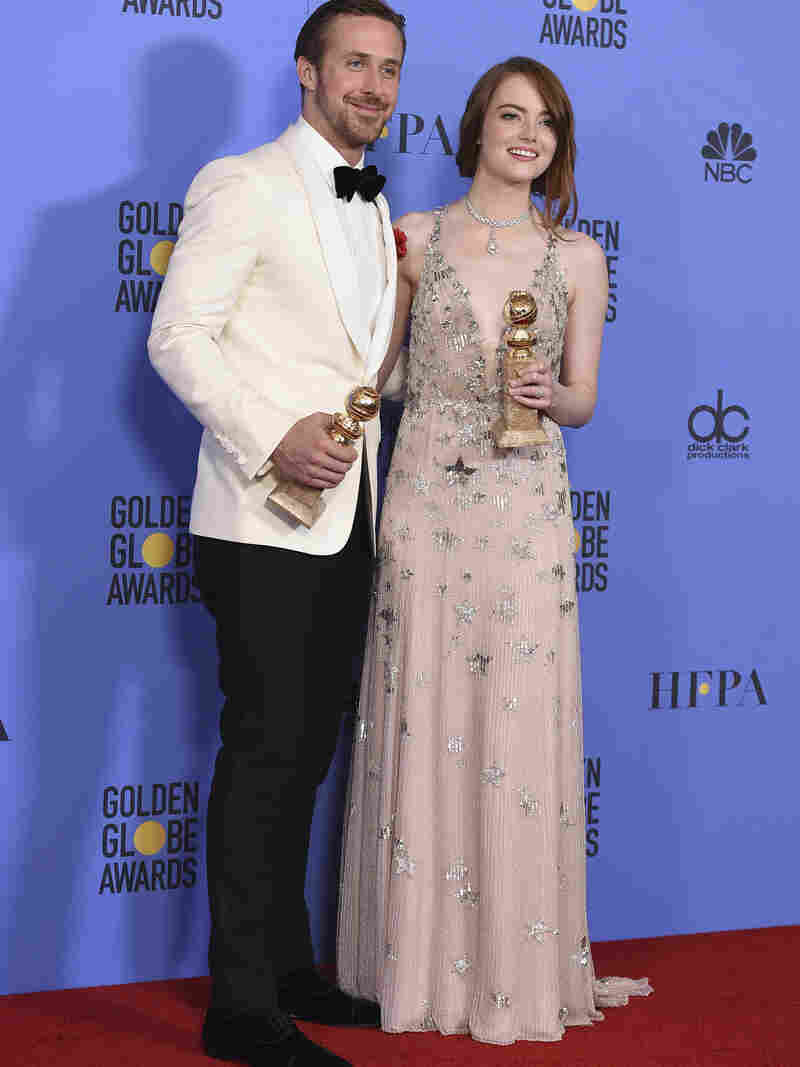 Ryan Gosling and Emma Stone pose with the award for best performance by an actor and actress in a motion picture - musical or comedy for La La Land at the 74th annual Golden Globe Awards at the Beverly Hilton Hotel on Sunday in Beverly Hills, Calif. Jordan Strauss/Jordan Strauss/Invision/AP hide caption 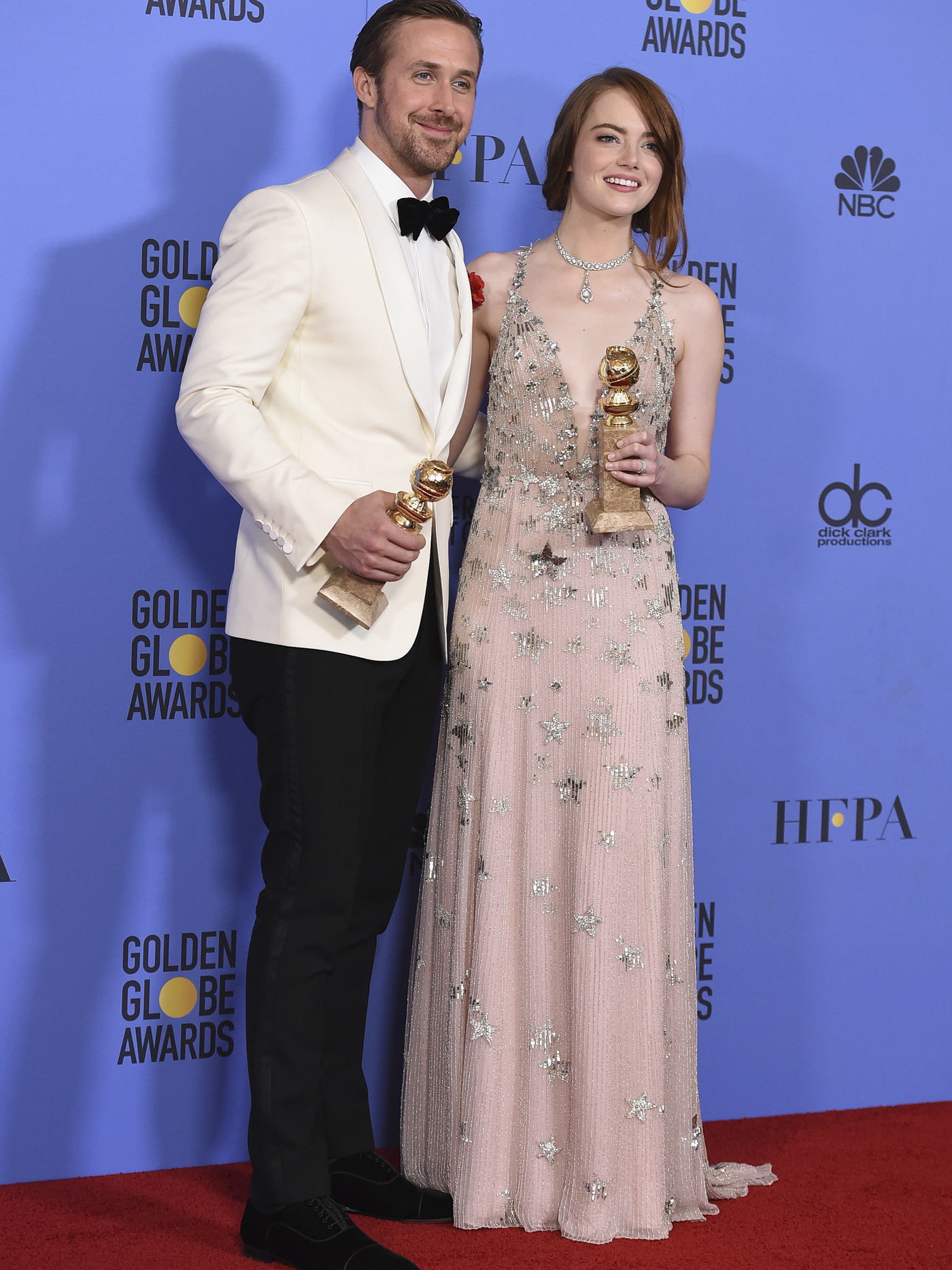 Ryan Gosling and Emma Stone pose with the award for best performance by an actor and actress in a motion picture - musical or comedy for La La Land at the 74th annual Golden Globe Awards at the Beverly Hilton Hotel on Sunday in Beverly Hills, Calif. 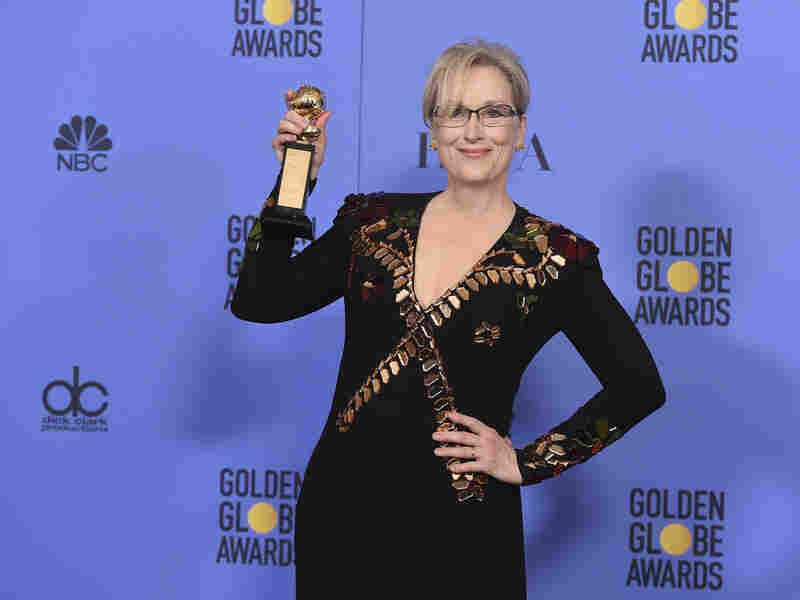 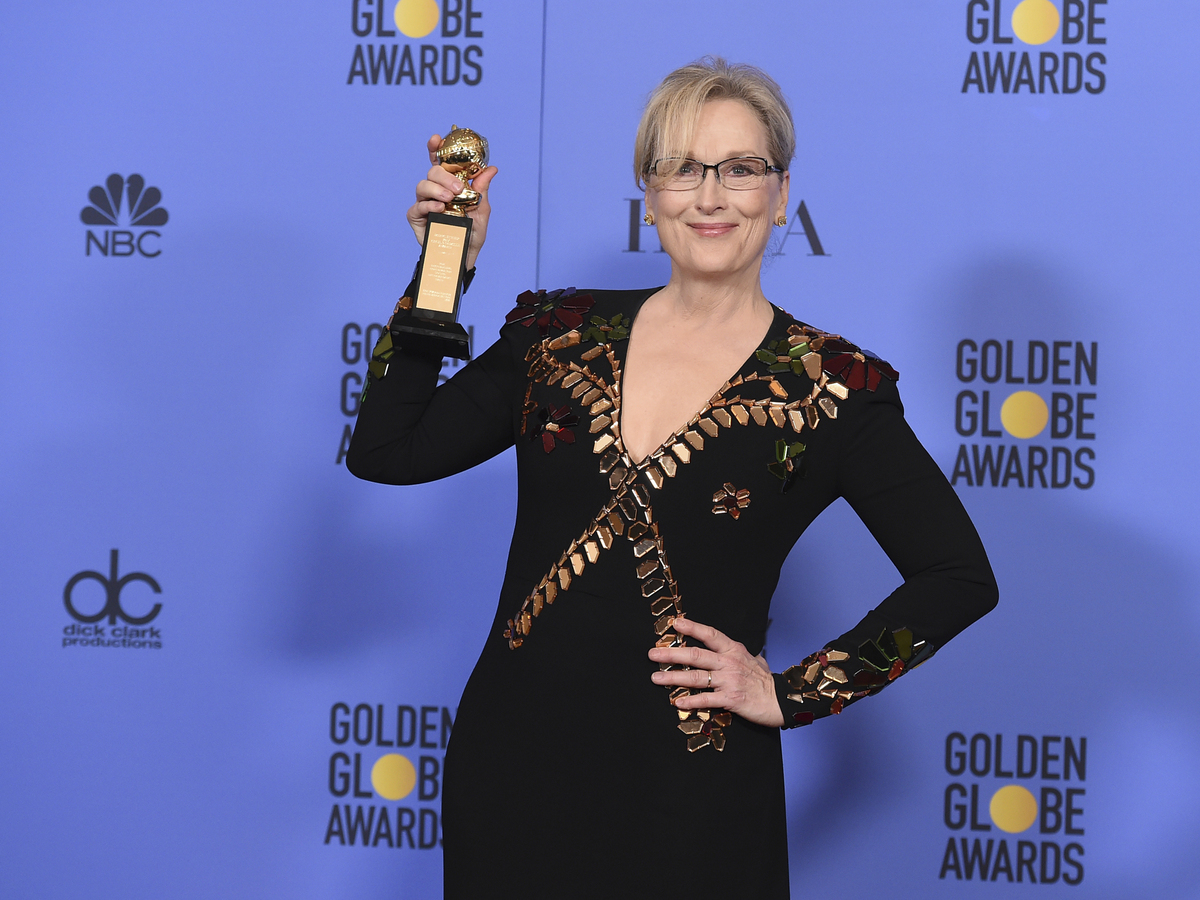 Meryl Streep poses with the Cecil B. DeMille award at the 74th annual Golden Globe Awards at the Beverly Hilton Hotel on Sunday in Beverly Hills, Calif.

But Meryl Streep, the Cecil B. DeMille Award honoree, supplied Sunday evening's most striking moment: a rebuke to Trump that stirred the Beverly Hilton Hotel crowd. Streep, who spoke at the Democratic National Convention, called the president-elect's mocking of a disabled reporter the year's performance that most "stunned her."

Arguing for the multinational makeup of Hollywood, Streep listed off the far-flung homes of stars from Dev Patel to Ryan Gosling.

"Hollywood is crawling with outsiders and foreigners and if you kick them all out, you'll have nothing to watch but football and mixed martial arts, which are not the arts," Streep said to loud applause.

Damien Chazelle's Los Angeles musical La La Land came in with a leading seven nominations, and won everything it was nominated for, including best film, musical or comedy. Chazelle won both best director and best screenplay. Gosling won best actor in a comedy or musical, as did Emma Stone for best actress. It also took best score (Justin Hurwitz) and best song for "City of Stars."

"I'm in in daze now, officially," said Chazelle accepting his award for directing.

On one of the evening's more emotional acceptance speeches, Gosling dedicated his award to the late brother of his partner, Eva Mendes.

"While I was singing and dancing and playing piano and having one of the best experiences I've ever had on a film, my lady was raising our daughter, pregnant with our second and trying to help her brother fight his battle with cancer," said Gosling, referring to Juan Carlos Mendes.

The Beverly Hills, California, ceremony got off to a rocky start, with a broken teleprompter initially froze Fallon. "Cut to Justin Timberlake, please," implored a desperately improvising Fallon. It was the second fiasco for Globes producer Dick Clark Productions, which presented the infamous Mariah Carey flub on New Year's Eve.

The Tonight Show host started the show with a cold open ode to La La Land in a lavish sketch more typical of the Academy Awards than the Globes. Fallon did a version of the film's opening dance scene, with starry cameos from Timberlake, previous Globes host Tina Fey, Amy Adams and the white Ford Bronco of The People v. O.J. Simpson.

In a more truncated monologue, Fallon's sharpest barbs weren't directed at the stars in the room (as was the style of frequent host Ricky Gervais) but president-elect Trump. He compared Trump to the belligerent teenage king Joffrey of Games of Thrones. His first line (at least once the teleprompter was up) was introducing the Globes as "one of the few places left where America still honors the popular vote."

That, though, isn't quite true. The Hollywood Foreign Press Association, a collection of 85 members, has its own methods of selecting winners. Best supporting actress winner Viola Davis, the co-star of Denzel Washington's August Wilson adaptation Fences, alluded to the group's reputation for being wined and dined.

"I took all the pictures, went to luncheon," said Davis, to knowing chuckles through the ballroom, as she clutched her award. "But it's right on time."

Davis continued what appears to be a certain path to the Oscar. Another favorite, Casey Affleck, also padded his favorite status. The Manchester by the Sea star took best actor.

Coming a year after a second-straight of OscarsSoWhite protests, the night was notable for the widespread diversity of its winners, in film and TV. Donald Glover's Atlanta won best comedy series over heavyweights like Veep and Transparent, and Glover later added best actor in a comedy. Glover looked visibly surprised.

"I really want to thank Atlanta and all the black folks in Atlanta," said Glover. "I couldn't be here without Atlanta."

Tracee Ellis Ross, accepting the award for best actress in a TV comedy for Black-ish, dedicated her award to "all of the women of color and colorful people whose stories, ideas, thoughts are not always considered worthy and valid and important."

And a true Oscar showdown was never in the offing at the Globes. Since the show separates drama from comedy and musical, La La Land didn't go face-to-face with its top competition, Moonlight and Manchester by the Sea, in top categories.

The British actor Aaron Taylor-Johnson took best supporting actor for his performance in Tom Ford's Nocturnal Animals. It was a surprise that Taylor-Johnson was even nominated, so his win over favorites Mahershala Ali from Moonlight and Jeff Bridges from Hell or High Water was a shock.

The People v. O.J. Simpson taking best miniseries, as well as an award for Sarah Paulson. But other winners were less prepared.

Hugh Laurie, star of The Night Manager, looked even more surprised when he won best supporting actor in a limited series or TV film over the likes of John Travolta (The People v. O.J. Simpson) and John Lithgow (The Crown).

Laurie was one of the few early winners to pepper his acceptance speech with comments about Trump. "I accept this award on behalf of psychopathic billionaires everywhere," he said. The Night Manager won two more awards, including best actor for Tom Hiddleston.