Accessibility links
DNC Candidate Tom Perez: 'We've Gotten Away From The Basics As A Party' The candidate for chairman of the Democratic National Committee — and Obama's labor secretary — was critical of Democrats' organizational efforts in an interview with NPR. 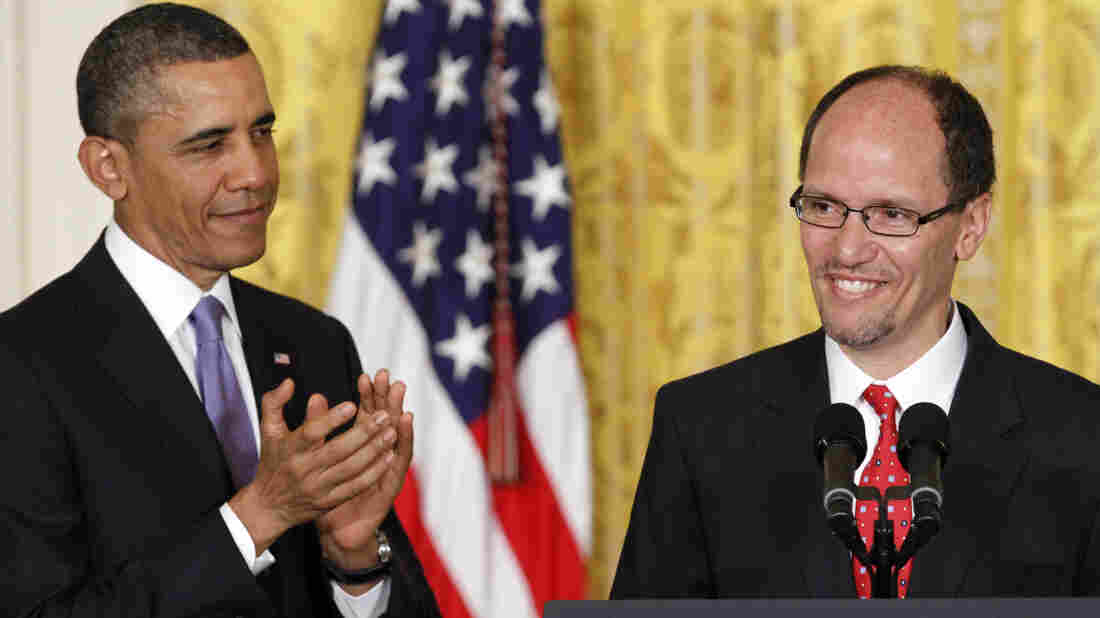 President Obama applauds Tom Perez in 2013, whom he nominated as labor secretary. Now, as the Obama presidency winds down, Perez is running for head of the Democratic National Committee. Jacquelyn Martin/AP hide caption 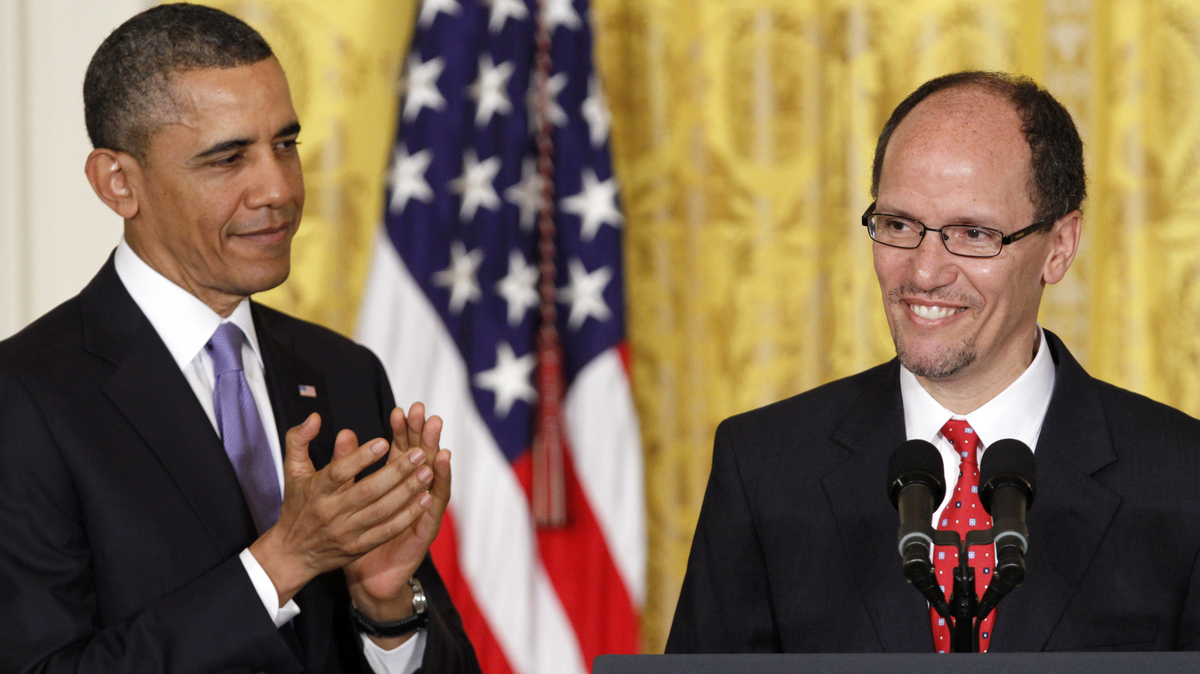 President Obama applauds Tom Perez in 2013, whom he nominated as labor secretary. Now, as the Obama presidency winds down, Perez is running for head of the Democratic National Committee.

After big losses in state Houses, Congress, and the White House, the Democratic Party is looking for a new leader.

NPR has been talking to several candidates for chair of the Democratic National Committee. On Friday, All Things Considered host Audie Cornish chatted with one who is closely tied to the Obama administration, Tom Perez.

The Maryland resident is the president's labor secretary but spoke in his personal capacity. He vowed to fight Donald Trump's agenda when it goes against Democratic principles, said he wants to lead the DNC by focusing on party infrastructure and grass-roots organizing, and argued that Democrats have "gotten away from the basics as a party," but he sidestepped when asked if he thought the DNC put a finger on the scale for Hillary Clinton in the Democratic primary.

On the DNC's failures in organizing

Organizing has to be a 12-month endeavor. You can't show up at a church every fourth October and say, "Vote for me," and call that persuasion. And that's what we've done. We've gotten away from the basics as a party.

And what I want to do, if I have the good fortune of being elected chair, is do exactly that. Build a party infrastructure in partnership with our state partners so that we have organizers in place in urban, suburban and rural communities across America, so that we are a force on important issues — whether it's voting rights, as I've discussed, whether it's cybersecurity, and we need to have a director of cybersecurity at the DNC, which we currently don't have.

On hacking during the election, and what is revealed about the DNC favoring Clinton over Sanders

Well, we have to have transparency. We have to have inclusion. And we have to have a leader, who will listen. So, for instance, one of the things that I would want to do, if I have the privilege of being elected, is to set up a structure so that we will have a debate calendar in place prior to when we know who the candidates are, so that we can eliminate any sort of perception that — or reality — that the thumb was being placed on the scale of justice to help one candidate or another.

Audie Cornish: After that episode and what we know now, do you essentially believe that the DNC tipped the scales in one way or another during the primary?

Cornish: But there may be some Sanders fans who want the next DNC chair to say, "Yes, this happened. We made a mistake and we're moving forward."

On Democrats' strategy for dealing with Trump

But you know what? If they are going to try to have a deportation task force, and they're gonna try to continue to deny climate change, you're damn right we need to fight. And we will continue that fight. Because this is the battle for the heart and soul of who we are as Americans.

A previous version of this story incorrectly called Tom Perez a native of Maryland. He's actually a native of Buffalo, N.Y., and resides in Maryland.