Accessibility links
Book Review: 'I Was Trying To Describe What It Feels Like,' By Noy Holland Noy Holland's new collection brings together several decades worth of difficult-to-describe stories — some only a few paragraphs long, and all of them hallucinatory and maddening in the best way.

'I Was Trying' Is Sneaky, Enigmatic, Obscure — And That's A Good Thing

'I Was Trying' Is Sneaky, Enigmatic, Obscure — And That's A Good Thing 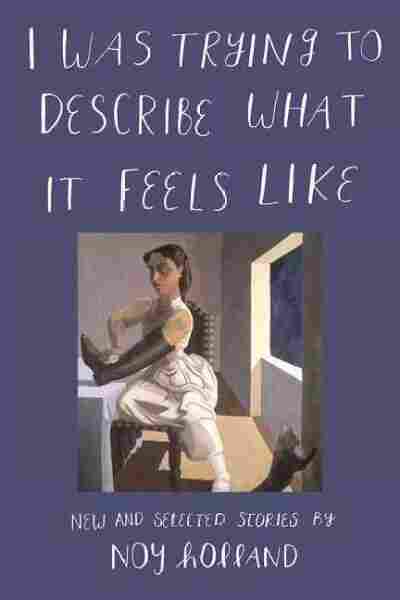 I Was Trying to Describe What It Feels Like

For a lot of writers, crafting fiction can feel like an exercise in trying to describe something — a concept, a sensation, an emotion — that really doesn't want to be described. It's a problem that can be solved by sticking to obvious themes and well-worn story arcs, but the best writers would rather put down their pens forever before surrendering to cliché.

Noy Holland, author of I Was Trying to Describe What It Feels Like: New and Selected Stories, is one of those writers. None of the stories in the collection are formulaic, and none of them are easy. Rather, they're sneaky, enigmatic, revealing themselves to the reader at unexpected times, sometimes long after the last word has been read.

The book begins with "Orbit," a standout story from Holland's 1994 collection The Spectacle of the Body. It's as straightforward as Holland's writing gets, which is to say, not very — and that's by no means a bad thing. The story centers around a young brother and sister, their mother ailing, their father missing. The children narrate by turns; their words are musical, almost inscrutable but not quite: "I am no weak sister gone to kneeling through the house at night to harvest lint from carpets, to polish and to clean. I am not afraid to sit darkly among our things and in the room where Mother sleeps, or is not sleeping, to sing, or am not singing."

There's not much light in "Orbit," or in many of Holland's other stories, including "Absolution," which follows a young woman with a troubled mother and an abusive boyfriend. Holland treats her narrator with sympathy, but it's written in a plainspoken, almost brutal style that doesn't spare her characters. "Jimmy's got a mean streak an acre wide that puts up a fence around me, puts a little shiver in me like I just better be ready, like expect the worst, because here it's coming," the narrator says. "But I like it. I don't know. I do."

It's difficult to describe exactly what's going on in a lot of Holland's stories; most of them don't have plots in the conventional sense. And she's also fond of short short stories, many only a few paragraphs long.

Holland's writing is by turns hallucinatory, bizarre, and maddening in the best possible way.

For the most part, she uses the microfiction technique to great effect, blurring the line between short story and poem. In "Music of the Old," Holland needs just 16 sentences to craft a moving tale about a boy on the roof of a parking garage, listening to the music playing from an Elks Club he's too young to enter. And she uses fewer than 100 words in "Blue Angels" to evoke the aftermath of an air show crash, but makes every one of them count; the result is both terrifying and powerful: "Glass blown to dust. Bodies torn rags across the sagebrush."

Not every story succeeds on its own terms. In stories like "Cuernavaca" and "Instructions for Xu Yuan Flying, or, The Lifting Force Let Go" (the latter one is not much longer than its title), Holland comes across as a little too coy, a little too clever.

But that's a minor complaint when the collection features stories like "Once I Wrote a Story," which can be read as a kind of key to the other tales in the book: "Once I wrote a story about you," she writes. "You said, What's it about? I said, You." Holland is at her best when she drops her guard, not all the way but just a bit, and invites the reader in, if only for a second.

I Was Trying to Describe What It Feels Like is a strong collection, and Holland's writing is by turns hallucinatory, bizarre, and maddening in the best possible way. She sees life as complicated, almost indescribable, moving so fast in so many directions that it's impossible, or nearly so, to pin down: "Nothing lasts, but nothing is finished, either. The brain boils and cools, same as many things, heals with the slickness of scars. Nothing's lost; no grief, unspoken, forgotten."