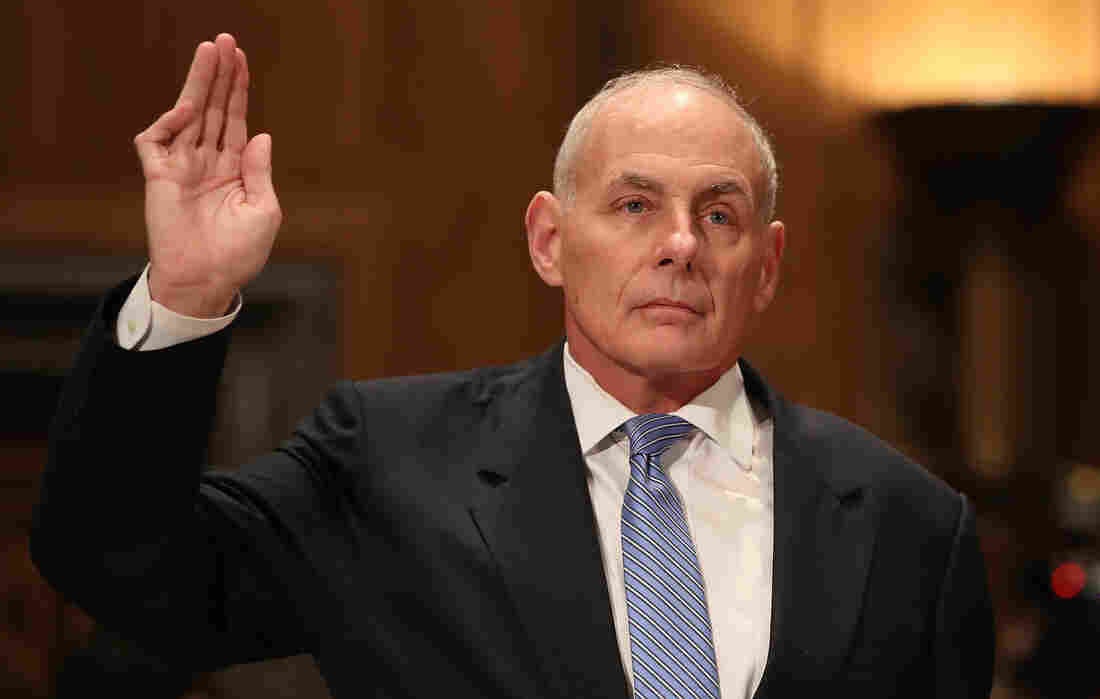 Retired Marine Gen. John Kelly is sworn in before his confirmation hearing in front of the Senate Homeland Security and Governmental Affairs Committee to run the Department of Homeland Security on Tuesday. Joe Raedle/Getty Images hide caption 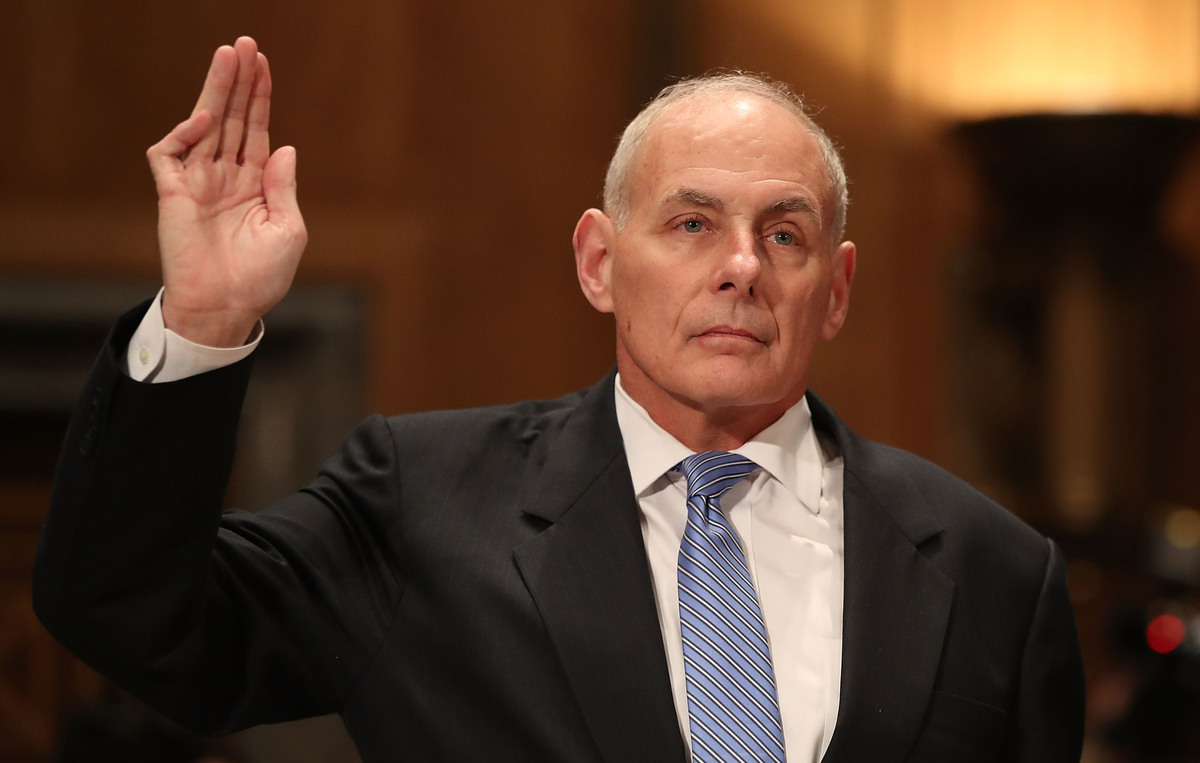 Donald Trump's nominee to lead the Department of Homeland Security, retired Marine Corps Gen. John Kelly, broke with the president-elect on many of his key campaign promises on immigration during his confirmation hearing on Tuesday, including a border wall, Muslims coming into the U.S. and torture techniques.

The former head of the U.S. Southern Command, Kelly agreed with a question from Sen. John McCain, R-Ariz., over the strategy to defend the country's southern border, both from immigrants crossing into the U.S. illegally and from drug traffickers, saying that a border wall would not be enough.

"A physical barrier in and of itself will not do the job. It has to be a layered defense," Kelly said, calling for more human patrols and assistance from drones and other sensors.

Kelly also stressed the need to work with other Latin American countries to forge better relationships to stop drug trafficking.

Kelly agreed with McCain that waterboarding should continue to be prohibited and that the Geneva Conventions should be followed.

"I don't think we should ever come close to crossing a line that is beyond what we as Americans would expect to follow in terms of interrogation techniques," Kelly said.

During the campaign, Trump pledged that he would bring back the controversial form of torture in order to fight terrorism.

Kelly also said he had "high confidence" in U.S. intelligence reports that found that Russia had engaged in cyberattacks in order to influence the U.S. elections. Trump has cast doubt on those findings.

Pressed by Sen. Gary Peters, D-Mich., on whether it was lawful to conduct surveillance on mosques or create a database of Muslims in the U.S., Kelly agreed that would violate the Constitution.

"I don't think it's ever appropriate to focus on something like religion as the only factor," Kelly said.

The Department of Homeland Security is a sprawling enterprise, with a budget of some $40 billion and a quarter-million employees. Its responsibilities encompass everything from natural disasters (FEMA), to airport security (TSA), presidential security (U.S. Secret Service), the Coast Guard and cybersecurity.

DHS agencies are also responsible for defending the nation's borders and overseeing the immigration system. It's those areas that are most in the sights of the incoming president, who has called for measures including a wall along the U.S. border with Mexico, the deportation of millions of undocumented immigrants currently in the U.S. and "extreme vetting" of immigrants wishing to enter the country.

Trump said on the campaign trail that screening should be focused on those coming from "some of the most dangerous and volatile regions of the world that have a history of exporting terrorism." Those comments were an adaptation of the ban on Muslims entering the U.S. that Trump had proposed at the end of 2015.

Asked by Sen. Kamala Harris, D-Calif., about deportation priorities, Kelly suggested that undocumented children who are part of the Deferred Action for Childhood Arrivals (DACA) program would "probably not be at the top of the list" and that he would "keep an open mind."

Kelly said that the incoming administration's immigration policy is still "ongoing," but that he has "not been involved in those discussions."

Overall, Kelly was well-received by both Republicans and Democrats during his testimony before the Senate Committee on Homeland Security and Governmental Affairs. Ranking member Claire McCaskill, D-Mo., praised him during her opening statement and later tweeted that he was a "good choice" to lead DHS.

Kelly was introduced by McCain, Democratic Sen. Tom Carper of Delaware, and former Defense Secretary Robert Gates, who served in both the Bush and Obama administrations. Kelly was an adviser to Gates at the Pentagon.

Gates praised Kelly, calling him "one of the finest people I have ever known," also saying, "I would trust him with my life."

The 66-year-old Kelly had appeared before lawmakers before, in his role as head of the U.S. Southern Command, which is responsible for military matters in the Caribbean, Central and South America.

Kelly's nomination is unlikely to be met with much opposition, and the questions on the committee bore that out. He has built up relationships with lawmakers who respect his service and his sacrifice. (Kelly lost a son to combat in Afghanistan.)