Accessibility links
Ferguson Painting By Student Sparks Tensions On Capitol Hill The painting is one of hundreds on display in a U.S. Capitol hallway as part of the annual Congressional Art Competition. The artist is from the Missouri district that includes Ferguson.

This painting by David Pulphus, Untitled #1, was chosen to hang in the Capitol as part of the Congressional Arts Competition. Zach Gibson/AP hide caption 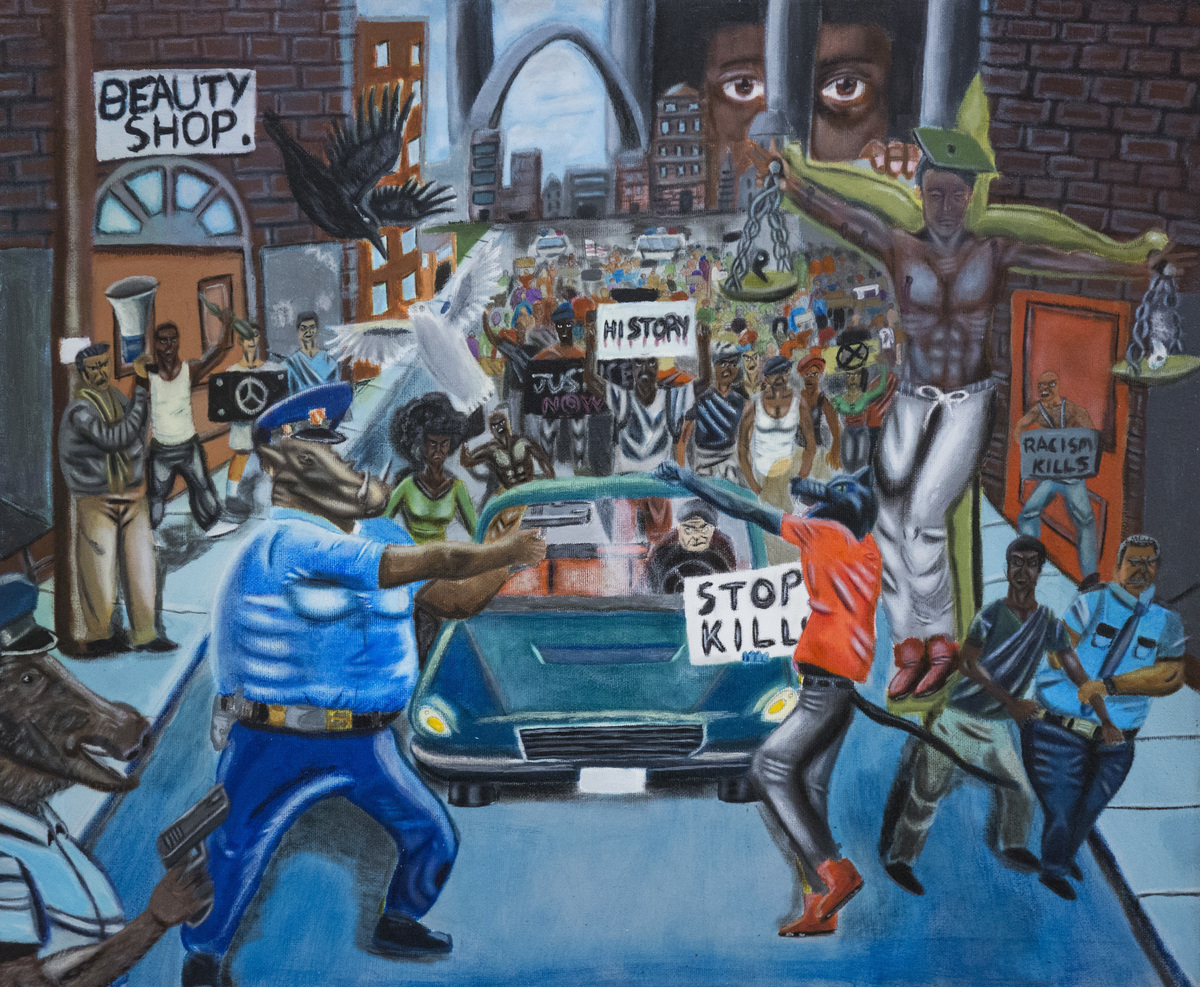 This painting by David Pulphus, Untitled #1, was chosen to hang in the Capitol as part of the Congressional Arts Competition.

A group of Republican lawmakers, backed by law enforcement advocates, are engaged in an increasingly aggressive public clash with members of the Congressional Black Caucus over a high school work of art depicting police officers with animal heads.

The latest chapter unfolded on Tuesday when Rep. William Lacy Clay, D-Mo., held a rehanging ceremony for a painting that had been taken down last Friday by his GOP colleague, Rep. Duncan Hunter of California.

"This is really not about a student art competition anymore. It's about defending the Constitution," Clay said, flanked by members of the Congressional Black Caucus.

By Tuesday afternoon, a duo of GOP lawmakers, Reps. Dana Rohrabacher of California and Brian Babin of Texas, had removed it from the wall again and carried it back to Clay's congressional office.

The painting, Untitled #1, by former Missouri high school student David Pulphus, has been on display in a well-trafficked Capitol hallway since June 2016.

Pulphus is a resident of Clay's congressional district which includes Ferguson, Mo., a town marked by civil unrest after the 2014 shooting of Michael Brown, a black 18-year-old, by a white police officer, Darren Wilson.

Investigators concluded the shooting was lawful, that Wilson had committed no civil rights violations, and that he acted in self-defense. But what happened in Ferguson has been part of an ongoing national debate about race relations with law enforcement and the criminal justice system.

Clay said Pulphus' painting offers a glimpse into how a young man views the world. "It's a collage of different scenes that this kid has experienced over the last five years," he said.

Pulphus' work was one of hundreds of winners in the annual Congressional Arts Competition. Since 1982, more than 650,000 high school students have taken part in the nationwide contest. In each congressional district, students submit artwork for a panel of local judges. The winners are put on display, above their local congressman's name, in the Capitol for one year.

It is one of the more wholesome — and staid — traditions of Congress, rarely drawing any media attention beyond glowing local coverage of area students.

But Pulphus' painting caught the attention in recent weeks of number of conservative media outlets, which prompted criticism from some law enforcement groups, which then sparked outrage from a growing number of Republican lawmakers.

One of those lawmakers was Rep. Duncan Hunter Jr., R-Calif., a former Marine, who took it upon himself last week to remove the painting from the hallway and deliver it back to Clay's office. Hunter, who is white, argued the painting is disrespectful to law enforcement, and violates rules that govern what is acceptable art to hang in the Capitol complex.

A resolute Hunter offered no apologies on Tuesday. "It was something that had to be done," he said, "So I just did it."

The unusually public display of antagonism among lawmakers is disappointing to Rep. Dave Reichert, R-Wash., a retired King County sheriff. "I was cop for 33 years, and that's not how you solve problems," said Reichert.

Reichert shares Hunter's objections to the painting being on display in the Capitol. But he had been working, quietly, to open up a dialogue with Clay about his concerns.

As a lawmaker, Reichert has been working to improve relations between police and the communities they serve. He is one of a bipartisan group of lawmakers that have traveled to cities like Detroit and Atlanta to meet with community leaders, and he has held hearings on these issues. He's also worked with civil rights icon Rep. John Lewis, D-Ga., to try and set an example of how to talk about an issue that often differs sharply along racial lines. He worries that the Hunter-Clay clash isn't helping his cause. "It's going to create further division," he said.

Whether or not the painting will remain on display is an open question.

With support from party leadership, Reichert is asking the Architect of the Capitol, the steward of the Capitol grounds, to review and make a decision on whether the painting meets standards outlined by the House Office Building Commission. Those rules prohibit displaying artwork that depicts "subjects of contemporary political controversy or a sensationalistic or gruesome nature."

Clay countered that the paintings have already been approved for display.

"Know that the Building Commission already approved all of this artwork on this wall," he said. Clay also argued that while the street scene was a reflection of modern tensions, there was a deeper context: "The African-American community has had a painful, tortured history with law enforcement in this country. So let's not ignore the fact, that that's not contemporary. That's historic."

No matter what, Pulphus' painting will come down this year. The next round of high school art contest winners will be announced this spring, and the winning entries will go on display this summer.

An NPR search found only one other incident of controversy in the art competition's nearly 35-year history.

The Orlando Sentinel reported in 1997 that a high school senior's painting won a first round of competition in the district, but it was ultimately rejected for submission, and never made it to the Capitol hallway. The painting was deemed "too racy" because it depicted a woman with an open blouse.