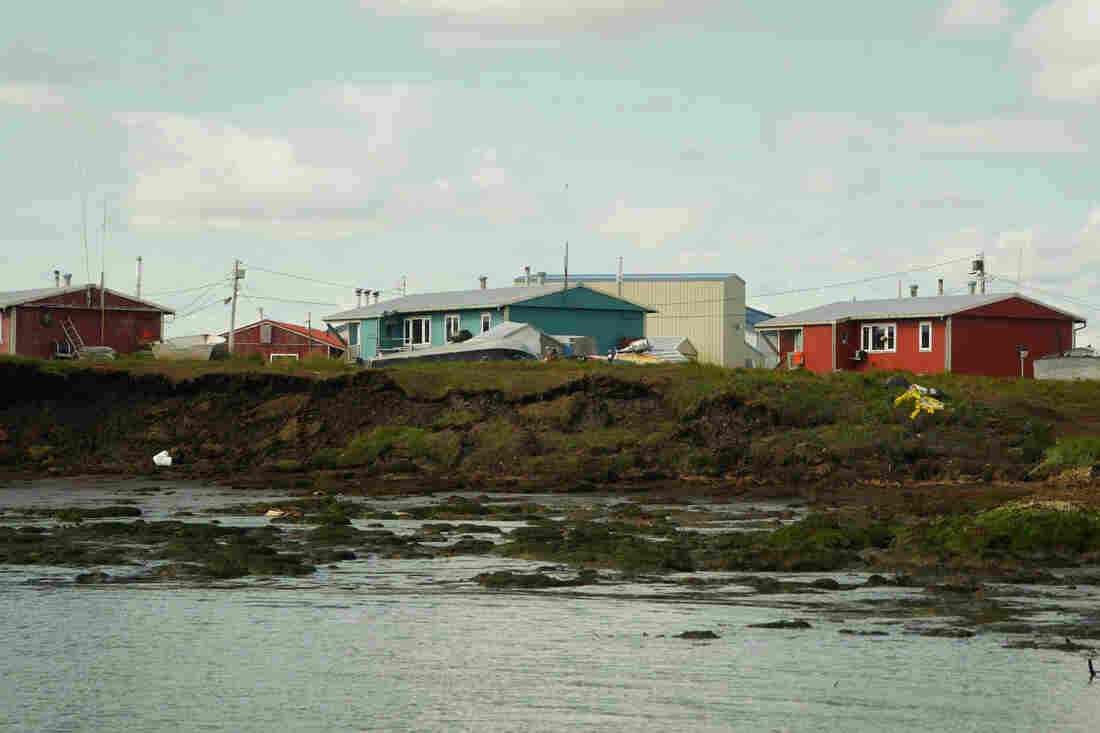 The Ninglick River is eating away at the shoreline in Newtok, Alaska, shown here in August 2016. Engineers estimate the village is losing 70 feet of land per year. Eric Keto/Alaska's Energy Desk hide caption 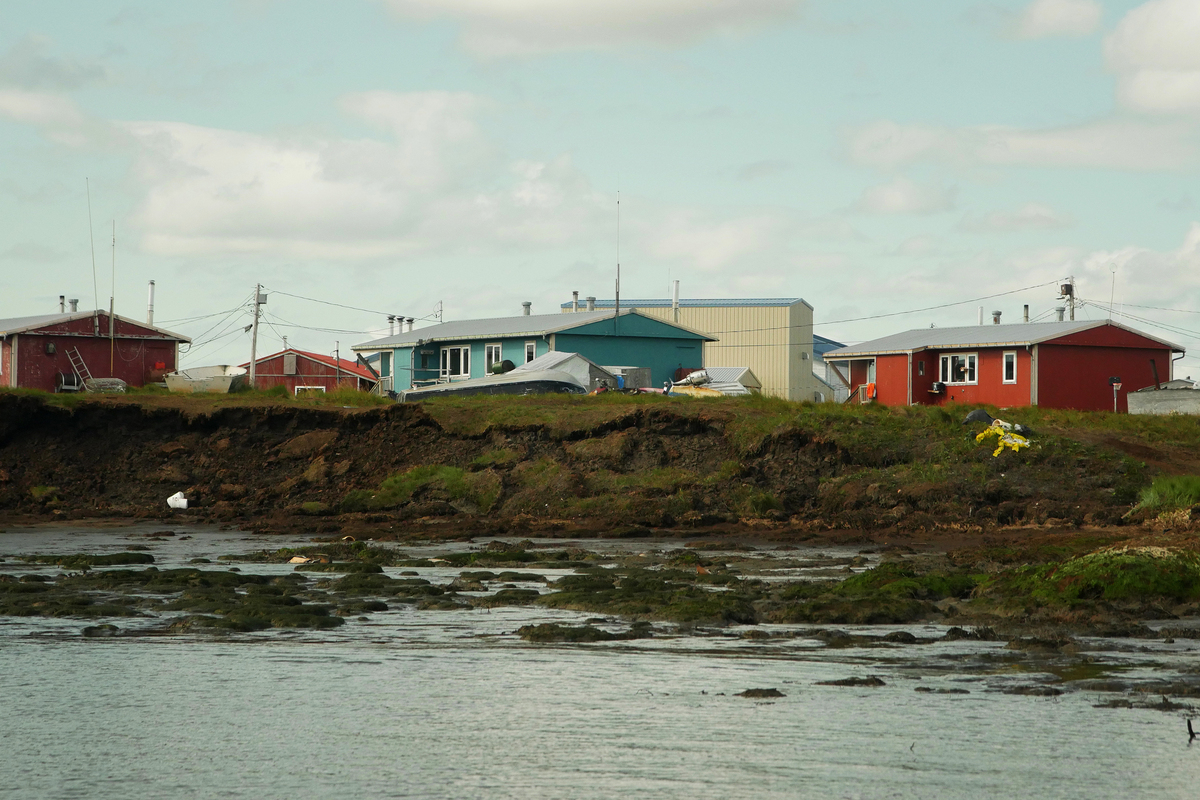 The Ninglick River is eating away at the shoreline in Newtok, Alaska, shown here in August 2016. Engineers estimate the village is losing 70 feet of land per year.

The tiny village of Newtok near Alaska's western coast has been sliding into the Ninglick River for years. As temperatures increase — faster there than in the rest of the U.S. — the frozen permafrost underneath Newtok is thawing. About 70 feet of land a year erode away, putting the village's colorful buildings, some on stilts, ever closer to the water's edge.

Now, in an unprecedented test case, Newtok wants the federal government to declare these mounting impacts of climate change an official disaster. Villagers say it's their last shot at unlocking the tens of millions of dollars needed to relocate the entire community.

"We just need to get out of there," says Romy Cadiente, the village relocation coordinator. "For the safety of the 450 people there."

Cadiente spoke while in Anchorage recently, where he met with state officials about moving the village, which includes a school built in 1958 by the Bureau of Indian Affairs that drew nearby subsistence hunters and fishers to settle.

Cadiente says the problem is money: The Army Corps of Engineers has estimated it will cost $80 million to $130 million to relocate key infrastructure.

"The price tag on this village move is astronomical, and what we have right now is nowhere near," he says. 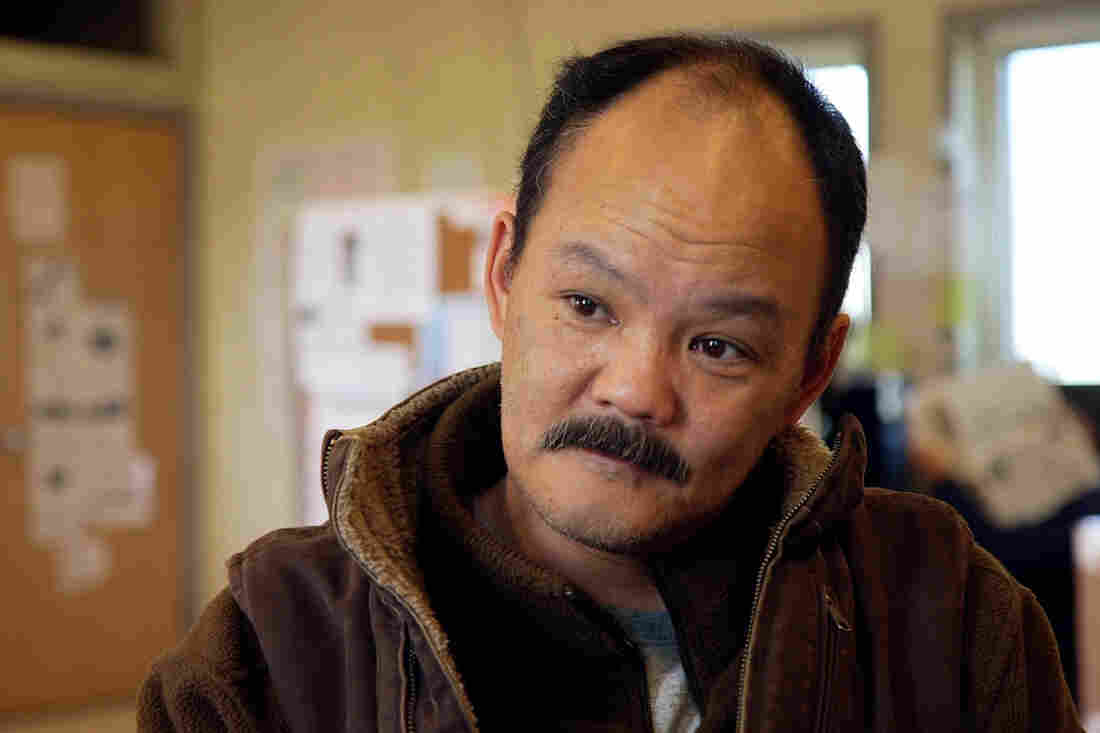 Romy Cadiente is Newtok's village relocation coordinator. "We just need to get out of there," he says. "We really do. For the safety of the 450 people there." Eric Keto/Alaska's Energy Desk hide caption 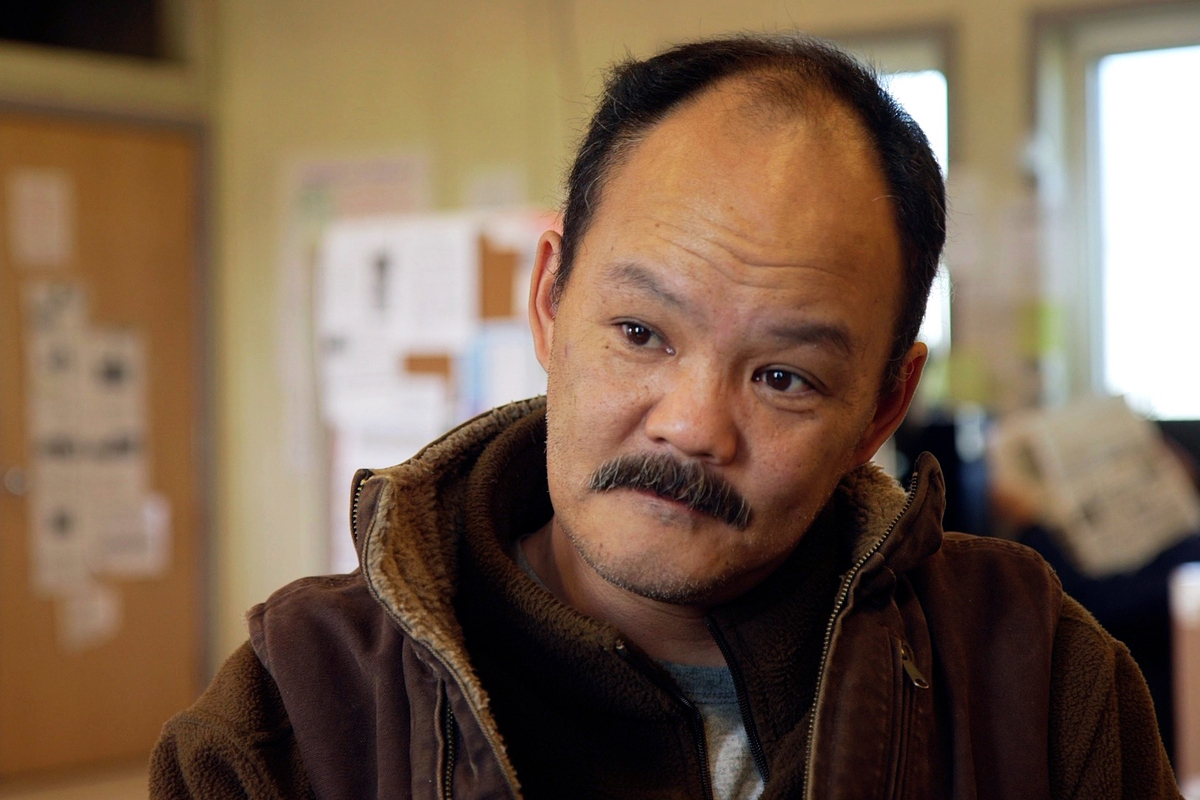 Romy Cadiente is Newtok's village relocation coordinator. "We just need to get out of there," he says. "We really do. For the safety of the 450 people there."

Many of Alaska's villages are dealing with erosion and thawing permafrost. But Newtok's needs may be the most immediate. It has already lost its barge landing, sewage lagoon and landfill. As river water seeps in and land sinks, it expects to lose its source of drinking water this year, and its school and airport by 2020.

After years trying to piece together state and federal funding to relocate, Cadiente says Newtok has run out of other options.

Usually, the president, with input from the Federal Emergency Management Agency, declares a disaster after a specific catastrophic event. But Newtok is asking for the declaration based on mounting damage from erosion and thawing permafrost over the past decade.

"My first reaction is, it's exciting," says Rob Verchick, who teaches disaster law and climate adaptation at Loyola University in New Orleans.

He says Newtok's request is likely a long shot. But he thinks it needs to be done. "And I think that it is going to lead to a very important conversation that we need to be having," he says.

Verchick says FEMA has pushed communities to plan for climate change, but the federal government doesn't have policies to deal with issues like relocation. As more places face the problem, Verchick says they — like Newtok — may need to get creative in seeking a legal solution.

A recent change gave federally recognized tribes like Newtok the right to request a disaster declaration from the White House directly. Mike Walleri, Newtok's attorney, argues that nothing in the law prevents the president from declaring a disaster for a multiyear event. 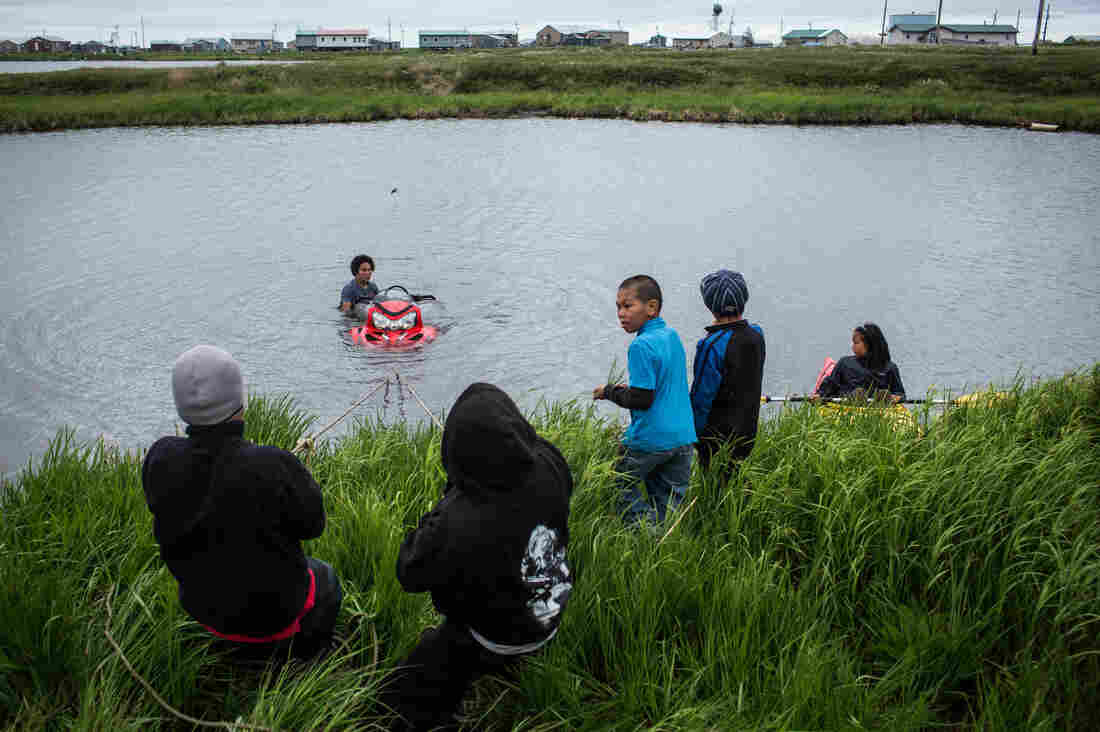 Yup'ik children help recover a snowmobile that sank when its owner attempted to drive across a pond, on June 30, 2015, in Newtok. Andrew Burton/Getty Images hide caption 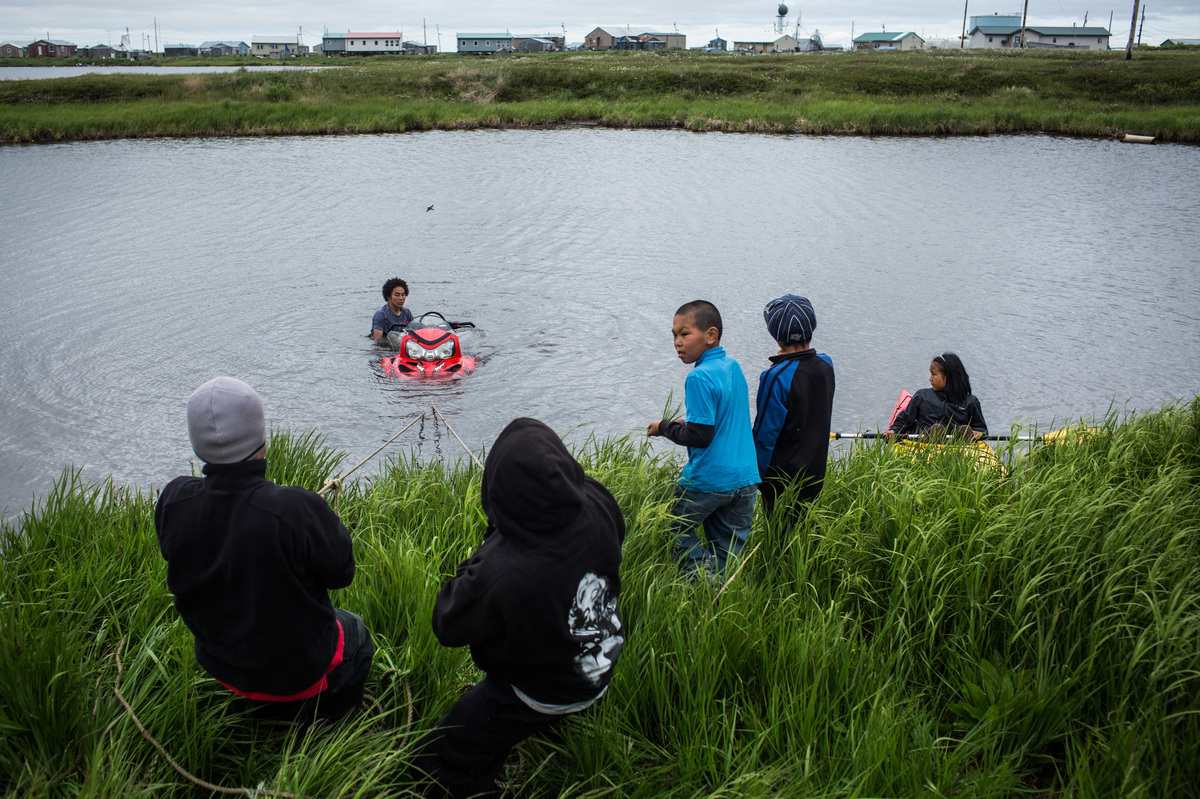 Yup'ik children help recover a snowmobile that sank when its owner attempted to drive across a pond, on June 30, 2015, in Newtok.

"You know, disasters are not planned," Walleri says. "They don't come in one size fits all."

If there's no money to relocate the whole village together, Newtok residents could be forced to scatter, with some even moving 500 miles away to Anchorage.

George Carl, the 66-year-old village council vice president, says it's not just houses that are at stake, but his community, culture, Yup'ik language and identity.

"Being born an Eskimo from that village, you know, that's my life," he says. "Place me to another village or city, it's not for me."

The ultimate decision on whether to declare a disaster lies with the president. Newtok's leaders hope to get an answer before President Obama leaves office next week.

This report comes from Alaska's Energy Desk, a public media collaboration focused on energy and the environment.