Accessibility links
Book Review: 'Lotus,' By Lijia Zhang Lijia Zhang's debut novel — about a young woman in China who fights her way out of the sex trade to become a teacher — is sensitively drawn, full of folk wisdom and concise, touching imagery. 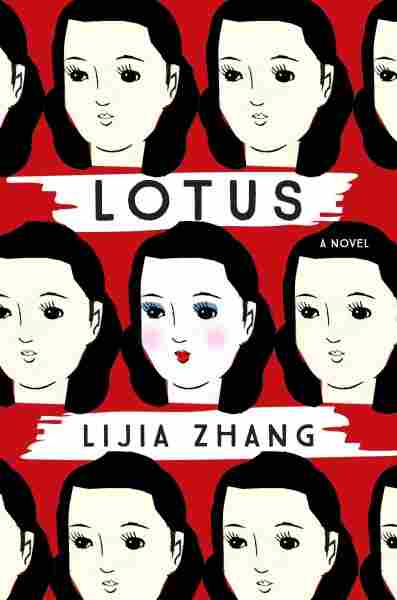 "A Newborn Calf Isn't Afraid of Tigers" is a typical chapter title in Lotus, Lijia Zhang's compelling debut novel. Readers will find the entire text rich in Chinese proverbs, as well as folk wisdom of a more prosaic variety. Characters employ sage sayings in spoken form, as a kind of parlor game, and the author scatters aphorisms liberally throughout the narrative, with an effect that is both charming and thought-provoking; after the titular Lotus loses face, she keeps on going despite the hurt, because "a cracked jar doesn't mind being smashed again." These lines could come across as stilted, but here they delight, as does so much of this sensitively drawn literary world.

Lotus herself is a charmer; her given name is Luo Xiangzhu, but she uses the nickname when working as a ji, or prostitute. She has escaped the provincial village of her birth, Mulberry Gully, and as a teenager journeyed a thousand miles south to Shenzhen, a seaside city just north of Hong Kong. Winding up in a red light neighborhood that she comes to call home, she enters the oldest profession on an inebriated whim.

China's Communists rejected prostitution as strictly a capitalist phenomenon — but it existed, and it reflected a class system the Party also tried to deny. At the top were "second wives" — a version of the classic concubine. In descending order, came high-end call girls, dance hall workers, masseuses and street hookers. Lotus, occupying the lowest rung but one, thinks about "how she had spent hours of her life ... smiling her red smile at every passing man." Burdened by the clichéd heart of gold, she builds her clientele at the Moonflower Massage Parlor, sending home money to bankroll her younger brother's college education.

Some first novels, especially those birthed in creative writing classes, go heavy on self-consciously poetic language ... The images Zhang gives us, in contrast, are uncomplicated, concise and touching.

Beautiful, modest and soulful, Lotus attracts the attention of an aspiring photographer and intellectual named Hu Binbing, or Bing. He becomes enmeshed in the lives of Shenzhen's massage parlor denizens while doing a magazine photo essay; Lotus serves as the star of the piece, identified only as "Girl A." An arresting image of her face launches Bing into new realms of fame and opportunity.

Zhang delicately sketches Bing's growing infatuation with Lotus and hers with him. They come together, fall apart, reunite. You root for them not necessarily as a romantic couple, but as two souls finding their true mission in life. But this is above all Lotus's story, in which she fights her way out of the sex trade to become a beloved primary school teacher. Though the personal relationship remains in the foreground, the political and economic realities of modern China lend the novel greater depth, a heady mix that might be called rom-communism.

The author has a light touch, even when delineating the underbelly of contemporary Chinese culture. She conducted research in the red light districts of Shenzhen, Dongguan, Beihai, Tianjin and Beijing, so there is a documentary verity to the telling, giving starch to fiction that might otherwise be flabby. Zhang also brings a personal stake to the book, dedicating it to her grandmother, who was sold to a brothel as a euphemistically-termed "flower girl," or courtesan.

Some first novels, especially those birthed in creative writing classes (Zhang, a former rocket factory worker in China, studied at the University of Iowa), go heavy on self-consciously poetic language. The author tries too hard and the reader suffers. The images Zhang gives us, in contrast, are uncomplicated, concise and touching. Young Lotus's "pencil was homemade, simply the broken end of a pencil's lead discarded by her classmates, stabbed into a piece of soft wood." Concerning Bing's emotions, Zhang writes, "He had been like an ant on a hot pan ever since the girls' visit."

Book groups be advised: Readers will learn quite specific tricks of the trade. Lotus is undeniably earthy but thankfully spare, letting its characters, and its proverbs, do the talking. When Bing wants to get serious with Lotus, we hear about the development a proverbial way: "What luck, this offer. A pancake fallen from the sky, as her grandma would say." We can count ourselves lucky to get this glimpse into the fascinating world of Lotus.