Accessibility links
Democratic Senators Attack President-elect Trump In Questions To His Cabinet Nominees Democrats are utilizing confirmation hearings to attack the president-elect's words and positions, which could continue today as Secretary of State-designate Rex Tillerson faces questions on Russia.

How Democrats Are Using Confirmation Hearings To Attack Trump

How Democrats Are Using Confirmation Hearings To Attack Trump 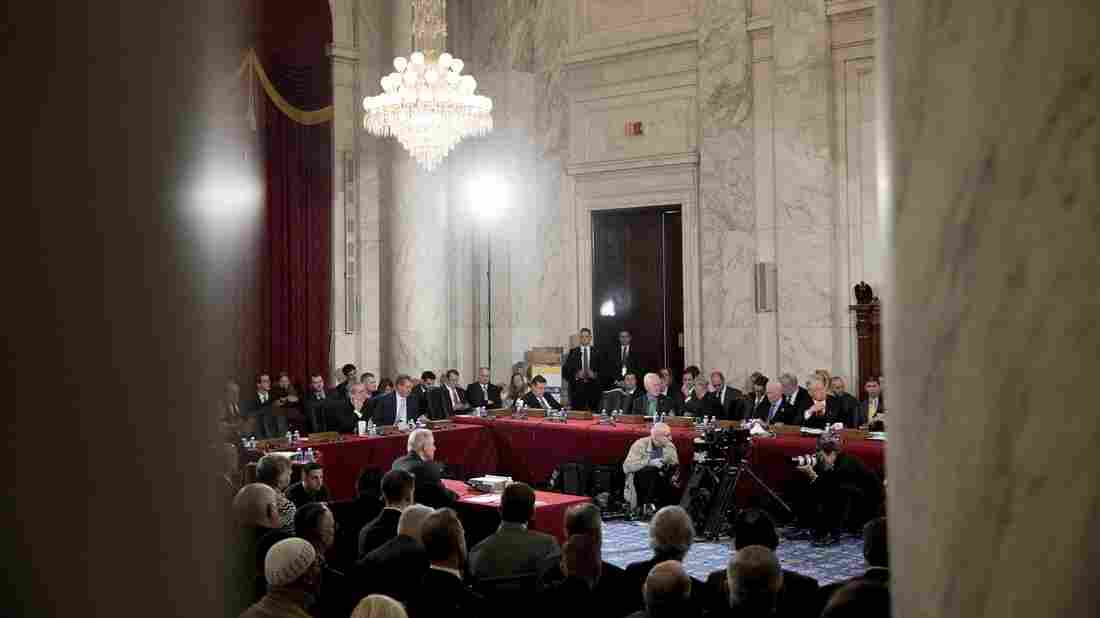 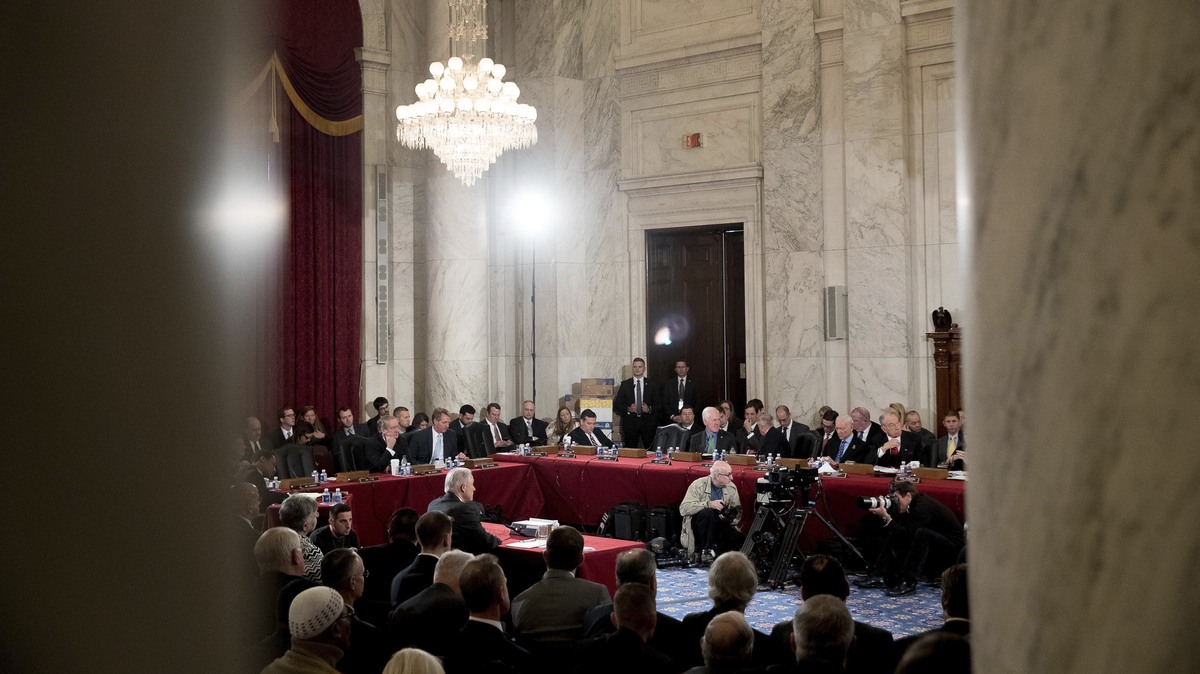 Democrats don't have too many opportunities to set the agenda in Congress right now. They don't decide what bills are called for a vote, and, due to changes in Senate procedures, won't be able to block any of President-elect Donald Trump's Cabinet picks without Republican defections.

One thing Democrats can affect are the headlines coming out of the first wave of confirmation hearings.

So on Tuesday, Senate Democrats did their best to pressure Alabama Sen. Jeff Sessions, nominee for attorney general, and Gen. John Kelly, nominated to lead the Department of Homeland Security, into distancing themselves from their likely future boss on key issues — and raise controversial statements Trump has made.

The playbook worked, with questions from Democratic lawmakers leading to moments where Sessions disagreed with Trump's initial campaign vow to ban Muslims from entering the United States, and Kelly doubting the value of a border wall as a deterrent to immigrants entering the country illegally.

Here are six moments where Democrats (and one Republican) took digs at Trump as they questioned his first Cabinet nominees.

While the Kelly and Sessions hearings were viewed as successes for both nominees, headlines like this are one reason why it's advantageous for Senate Republicans and the Trump transition to have so many in such a tight window — so numerous statements like these compete for attention.

Multiple high-profile hearings will compete for attention again on Wednesday, as President-elect Trump is scheduled to hold his first press conference since being elected. If Democrats force Rex Tillerson and other nominees to distance themselves from Trump, Republicans hope fewer eyes will be drawn to those statements.

Russia has been dominating the headlines out of Washington — even in the hours leading up to Tillerson's hearing — and that will likely be a major theme when the Senate Foreign Relations Committee questions Trump's pick to lead the State Department.

Rex Tillerson knows Russia well. As Exxon Mobil CEO, he has negotiated deals with a Russian energy giant, Rosneft, including a project to drill in the Arctic, which was put on hold because of U.S. sanctions following Russia's annexation of Crimea and its actions in Eastern Ukraine. With Exxon Mobil shareholder interests in mind, Tillerson opposed those sanctions. The ranking Democrat on the Foreign Relations Committee, Ben Cardin, D-Md., plans to press Tillerson about how he would approach this topic now if confirmed as America's top diplomat.

"I think you're going to find that there's going to be a great deal of interest as to whether Mr. Tillerson understands that he is no longer going to be CEO of Exxon Mobil but that he's going to be secretary of state, the nation's top diplomat," Cardin told reporters on the eve of the hearing.

Cardin was one of 10 senators to introduce the "Countering Russian Hostilities Act of 2017." The bipartisan legislation would impose more sanctions on Russia over its cyber-intrusions, as well as its actions in Ukraine and Syria.

In his prepared remarks, Tillerson is to tell the senators that he's "clear-eyed" about Russia and believes Moscow should be held to account for its actions. "Our NATO allies are right to be alarmed at a resurgent Russia. But it was in the absence of American leadership that this door was left open and unintended signals were sent," he plans to say.

Activists are encouraging U.S. senators to also press Tillerson on his views about climate change and whether he will distance himself from the interests of an energy company, where he spent his entire career, often doing deals with autocratic states. ExxonMobil severed ties with Tillerson to clear up concerns about conflict of interest. That too will come under scrutiny.

Compared to the tough grilling Tillerson could get, Transportation Secretary-designate Elaine Chao is expected to breeze through her confirmation.

Members of the Senate Commerce, Science and Transportation Committee will likely have a lot of questions for Chao about highway, rail and aviation safety regulations, new technologies such as self-driving cars and trucks, and most notably, President-elect Trump's call to invest up to a trillion dollars in the nation's infrastructure.

"It should be a piece of cake," the ranking Democrat on the committee, Bill Nelson of Florida, told Politico.

Chao, 63, served as labor secretary for eight years under President George W. Bush, and previously in transportation posts during the first Bush and Reagan administrations.

She's considered experienced, politically savvy and has been praised by transportation industry groups.

"I don't know if they could have found a more qualified, dedicated public servant," said Ray LaHood, a former Republican congressman from Illinois who served as transportation secretary during President Obama's first term.

"She knows how to run an agency and she will bring lots of experience and expertise," LaHood told NPR recently. He also said she will be an "outstanding secretary of transportation."

Chao is also a longtime Washington insider — seen as one key appointment who defies Trump's call to "drain the swamp." As the wife of Senate Majority Leader Mitch McConnell of Kentucky, she has close friendships with many of the senators who will be voting on her confirmation.

So if any of Trump's Cabinet choices are a sure bet to win confirmation, Chao is it.

The Senate Judiciary Committee will continue its consideration of Trump's nominee to be attorney general on Wednesday, though Sessions finished his testimony after a full day in front of his fellow senators on Tuesday.

Outside witnesses will testify about the record of the Alabama senator on the second day — both for and against.

The high profile supporters who want to see him lead the Justice Department include former Attorney General Michael Mukasey and the head of the Fraternal Order of Police, Chuck Caterbury — in addition to law enforcement officials from Alabama.

Civil rights groups are opposing the Sessions nomination, and the head of the NAACP, Cornell Brooks, and ACLU legal director David Cole will both testify on the second day of the Sessions hearing.

Two of Sessions' colleagues from Capitol Hill will also oppose him. Congressman John Lewis, a veteran of the civil rights movement, is expected to highlight concerns about whether Sessions will enforce civil and voting rights laws.

So is Sen. Corey Booker, D-N.J., in an extraordinary step. His decision to testify against the nomination of a fellow senator — who has received a warm reception from many other colleagues — is being widely described as unprecedented.